Our usual lunch guys did us an accidental favor.

When the flood happened, around the 20th, they closed down.  I assumed it had something to do with the unsanitary nature of serving food while ankle deep in ditch water, but I was wrong.  Turns out that they close down for a few weeks every year at this time.

Thrown on our own resources, we wouldn’t have starved, but we wouldn’t have been very happy either.  Rather than eat our own cooking for lunch and dinner, we rode the motorcycle into Thampanoor pretty much every day for lunch.  This sucked a bit for two reasons: 1) It’s a little ways off and poor James had to go from deep in the story he’s writing to ultra-aware of the traffic.  2) The places in Thampanoor are roughly twice as expensive as we’ve gotten used to paying.

So Saturday came and the power went out.  It went out at about 9:30 and was still out at 11:30 when we lost patience for waiting to be able to work.  To distract us, I suggested that we take action – do something that I’d been thinking about for a while.  We know our main street pretty well, but Trivandrum (like much of India) is busy everywhere, not just on the main drags.  So we thought we’d go exploring.

My ulterior motive in selecting a direction was simple.  I wanted to find a veg-only restaurant within walking distance of the house.

In India, we’ve eaten at few restaurants that also serve meat.  It’s safer to look for “Veg Only” or “Pure Veg” on the building than to try to communicate in our non-existant Hindi, Malayalam, Tamil, Marathi, etc, etc, etc.  When we have ended up in meat-serving restaurants (like the one we’d been eating lunch at), veg was one word the server usually understood.  But we have also been tossed out on our ears.  Okay – we left, but it kind of felt like tossed out when they informed us that there were no veg options.  Mutton biriyani.  No thanks.

So where does one find vegetarian food in a mostly Muslim neighborhood?  Well, I was hoping we’d find it near a temple.

I’d read about one called the Attukal Bhagavathy Temple.  It’s in the Guiness Book of World Records.  No really.

It’s dedicated to the goddess Bhagavathy, who is the Supreme Mother.  She is an incarnation of Vishnu who annihilates evil and protects the good in the world.  Refreshing for a person raised with soft females gods like Mary, she is depicted with four arms, each of which holds a weapon.  There’s another story about a woman named Kannaki.  I can’t figure out how that one fits in.  Can anyone enlighten me?

We walked first to the grocery store, being as though I thought I remembered it being near there (and we needed groceries).  Sure enough, they pointed us up the side street right next to them, saying, “Go straight!”

This being India, that meant go straight until the road curves left, then right, then ends in a brick wall.  Then you go straight on the nearest road to the right.  Then go right.  Um.  I think that was it.

We found the temple, no problem.  Well, first we found a smaller temple and I was surprised that it hosted such festivals as I’d read about.  Then some young boys got us turned back around and we made it to this one.

Sure enough, there are two vegetarian restaurants right there in front of the gate.  Yippee!

We’ve been back there every day since then.  (Four days now.)  They’ve gotten used to us already, sort of.  And our server has asked us to come to his home and visit.  Since he lives about 3km from Neyyar Dam, which we still haven’t found, we thought that sounded lovely.

So we get some of the best food we’ve had in India and we get to finally see Neyyar Dam!

Also, the restaurant we like – called Hotel Abhirami, though they have no rooms – is full of really great people.  They are pleasant and interesting and helpful and enthusiastic, which is a welcome change from the somewhat endearing, crotchety, grumpy, taciturn guys at Hotel Medina right here.  It’s worth the walk, for sure.

Besides, did I mention how good the food is?  We get a ridiculous pile of rice, dal, sambar, rasam, theeyal, aviyal, and something that the server called buttersauce but seems like coconut and pineapple with mad spices.  Yum. (From 11 years later, I’m reaching into the past to say that it’s actually called pulissery.)

And while we eat, there’s music from the temple.  We could barely hear it today, but yesterday it was broadcast to the whole neighborhood.  On Saturday, when we first visited, we had the amazing luck of showing up as they were playing and we recorded almost four minutes. (Again, from the future. That recording is gone!)

If this is a regular day, what are the festivals like?

The big festival is the Pongala Mahotsavam.  This is what their website says about this festival: “The entire area of about 5 kilometre radius around temple with premises of houses of people of all caste, creed and religion, open fields, roads, commercial institutions, premises of Government offices etc. emerges as a consecrated ground for observing Pongala rituals for lakhs of women devotees assembling from different parts of Kerala and outside. The ceremony is exclusively confined to women folk and the enormous crowd, which gathers in Thiruvananthapuram on this auspicious day is reminiscent of the Kumbhamela Festival of North India. ”

Wondering about that world record? 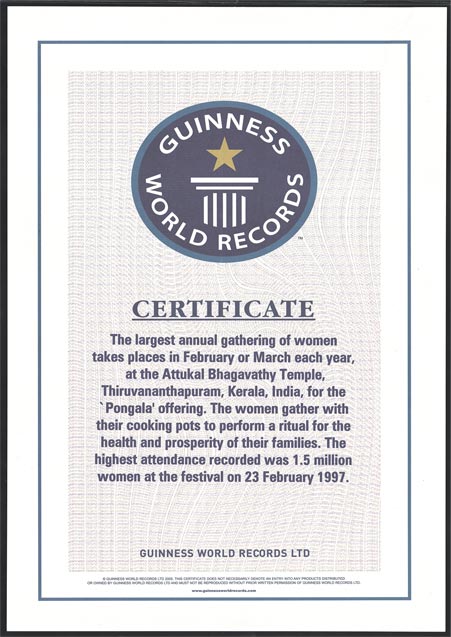