I don’t know, but I had a ball yesterday.

James and I rode out to this big empty square. I remembered it being very quiet there one Sunday when we were looking for a beach, so it seemed like a good place to try my hand at riding the motorcycle myself.

James has been driving everywhere we go. He has a ton of experience riding motorcycles and he picked up the rhythm of Indian traffic very quickly. Since he doesn’t have to think about operating the motorcycle, he was able to focus on getting used to the much more dangerous part.

Me, I rode a 50cc motorcycle when I was around 10 years old. I remember enjoying it to a certain extent, but I was already too big for it and preferred the go-cart, the tractor, or – if Dad felt like giving me a lesson – the truck. I remembered the feeling of letting off the clutch and twisting the throttle. I remembered how the motorcycle seemed to want to jump out from under me. That was one of the things I had learned on the little bike – how to really sit on it and ride with it.

When I first tried riding the Bullet we have now, I felt the same thing. I was standing so firmly on the ground that I almost didn’t move when the bike started rolling. It came back to me suddenly, in that moment, how it felt to ride a motorcycle. Way fun!

But I didn’t really get any practice. I just got going, tried out the gears, and turned around in circles. This was in an empty festival yard – a big open area with some pitted spots, some gravel, and some grass. My newly-healed ankle whined at me with even that little bit of starting the bike and shifting, so I didn’t last long. All I really achieved was the feeling that, in an emergency, I could get James and myself to a hospital or hotel or something.

Yesterday, I more or less ran drills while James sat, bored but alert in case I ran into trouble. One side of the square has six little sleeping policemen, so I practiced remembering to clutch when I slowed way down for them. That side was lined with houses. One side was clear and wide without much traffic, so I could get up a little speed and practice running up and down through the gears. One side was pitted and I practiced weaving around the potholes. And the last side was in real traffic, so I practiced looking for an opening and getting out into the flow.

So there I was going around and around. On the first circle, the guys hanging out stared at me. On the second circle, I killed the engine and had a little trouble starting it. Those guys were all over me, advising me on how to make it start. I knew what they were trying to tell me – use the compression release and give it a little throttle – but just nodded and smiled while I got it going. They all cheered and waved me off.

On the third circle, they looked confused. A small gaggle of women had appeared in the walled enclosure fronting their house and they smiled at me with enormous eyes. Then a group of children gathered and sat as though I was better than TV.

Around I went, and each time I passed these people, they looked both confused and delighted. I had slowed way down for a kid – you know, a baby goat – and the guys yelled, where are you going?

Now I thought that was a pretty funny question. Here I was, going in circles, and they thought I was lost? I just laughed and kept moving. The next time around, the kids asked me and I answered without stopping, around in circles. I laughed again, but this time with a slight incredulity that added a sharp edge to the sound.

The ladies asked last. This time I stopped. I put the bike in neutral and leaned forward on the handlebars. “Practicing,” I said, and they looked confused. “Learning to ride the bike,” I said and made a circle with my finger. One lady said, “Ah!” and chattered at the others. Soon, they were all smiling and nodding. As I waved and started off again, one lady leaned over the wall and passed the word to the next-door neighbors.

I rode off, knowing that the word would spread. Maybe they’d stop staring! No such luck. A woman riding a bullet is a rather exciting sight. A white woman in a churidar riding a bullet in circles is just plain comedy. Or so it seemed to me. The whole neighborhood ended up coming out to see. I felt like I should be doing tricks – standing on my head on the seat, popping wheelies and jumping the rock piles.

I crossed the road with the major traffic and took off down a quiet stretch, straight and with few side roads. It was a perfect place to get up some speed and feel like I was really riding. There were sleeping policemen periodically along the road and I had to slow quickly once I saw them. I felt that was good practice as well, except when I didn’t see one coming and put the bike into a slight slide hitting the back break too hard. Okay, now I know how hard too hard is. I swung in a wide circle around a flag pole right next to the All-India Radio tower and zoomed on back down the road. This time, I was prepared for each bump, and I had a grand time.

When I got back to the major road, there was a snarl in process. A bus was at the stop, a car had tried to turn behind it, the rickshaw blocking the car’s way was in the right, but trying to back away sideways to let the car through. A river of pedestrians was taking the opportunity to cross the road, the bright blues, reds, whites flowing around the red bus and mostly black and white cars, motorcycles, and rickshaws.

Well, it seems as though I was the last straw. When I pulled up, the bus pulled out. That should have cleared the way, but instead, the rickshaw drivers were staring at me, the car’s driver was grinning, the pedestrians were pausing to look, and a woman in the back of a rickshaw almost fell out trying to see me better. The rickshaw was making a right turn off the main road, so they were stuck at an angle just in front of me. She was one of the most beautiful women I’ve ever seen, and she was smiling at me as though I was the best thing in her life.

I think I’ve inadvertently been in the closet on this blog. I like women. I like them in, you know, that way. Though I put away the idea of flirting when we came to India (just what I need, another set of miscues to confuse me!), I’ve been getting these smiles. The smiles I get from the women here in India say to me “I am interested in you,” “I would like to know more about you,” and “how fascinating!” These are looks and smiles I’m used to interpreting as flirtatious. So, as a person who likes to flirt with other women, who is open to the idea of taking things beyond flirting…it’s quite the tease.

So yeah, there I was, the most beautiful woman in the world smiling at me as though she’d like to take me home and figure me out, as though she admired me and wanted to get to know me better. It knocked my socks off, and it took a couple of horns honking as the traffic mess sorted itself out before I remembered that she was probably not flirting. Sigh. Oh well.

They drove off, heading past me, and I nodded to her wave. When I turned my head back, there was a group of about ten women all staring at me in the same way! Three or four generations of women, all lovely in some way. I felt special, dangerous, and influential, just sitting on a motorcycle at that intersection. The men were amazed but the women – right at that moment, they all loved me.

I bounce back and forth like that whenever James and I wander out of our writing room. Sometimes, I feel like the funniest thing ever. When I’m trying to eat and I suspect I’m not doing it right. When my opinion of the hacking in the butcher shop shows in my face. When my dupatta won’t stay put no matter how firmly I hold it. And sometimes I feel like a rock star. Children point and laugh, they run to us to ask us how we’re doing. They smile with their whole bodies. Did I do that? Did I inspire that happiness and excitement? Women look at me as though my happiness is a compliment to them. Whew.

What will it feel like to go to another place, to go back to the US or to a place where I can pass as a local? Will I feel invisible? Will I be saddened and will my happiness fade? I am generally a happy person, but I never – never – walk down the street here for long with a frown on my face. 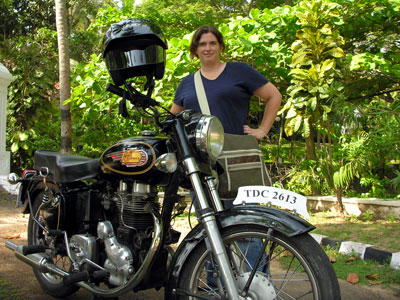