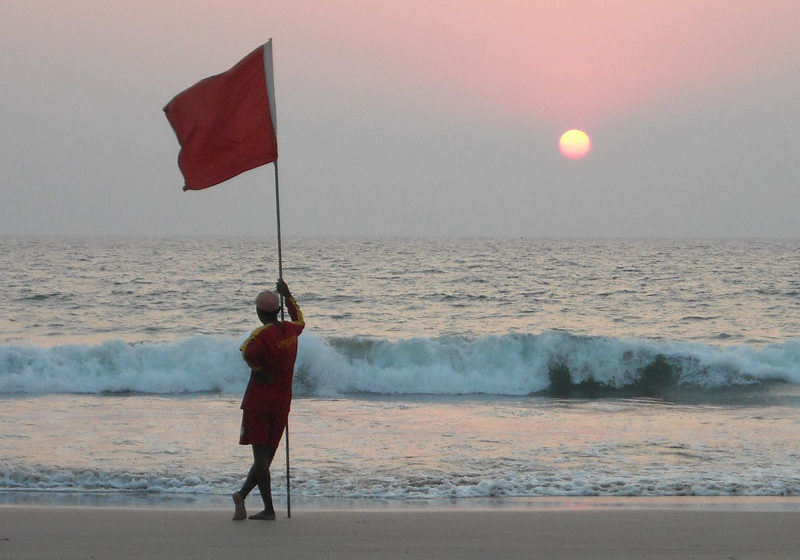 The Rajdhani Express is the nice train. You get fed; you get tea; you get lots of nice things. But it’s still a train. And not really that nice. 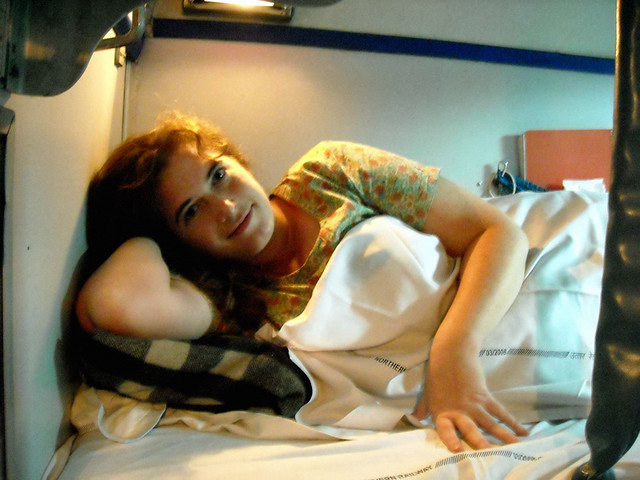 When we arrived in Margao (or Madgaon), I was exhausted by doing nothing. The bumps and wiggles of the train car had pulled my stitched-up belly this way and that all night, and I was tired. We shared the compartment (we were in AC2, meaning there are 4 bunks in the compartment) with a nice couple who were heading home. I wasn’t feeling like chatting, though, and James was reeeeeally not feeling like chatting. We made our beds in the top bunks and stayed up there for almost the whole ride. 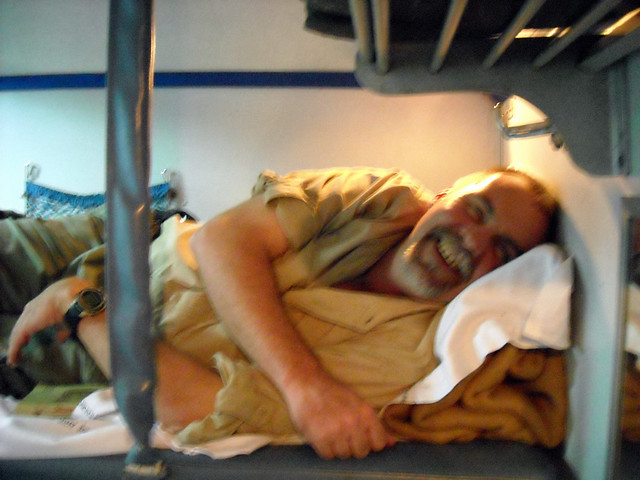 Anyway, once we arrived, we picked a taxi by following the first person who offered us a ride. It’s about 9km to Colva Beach, and that’s where we wanted to spend our last few days in India. 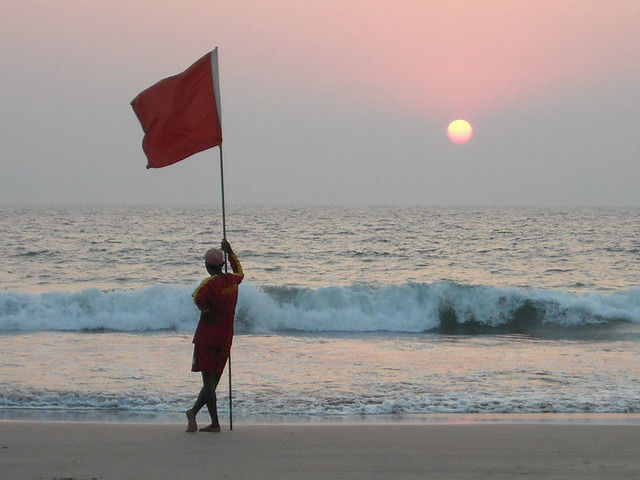 I’d looked on the internet and discovered that there were some nice resorts that weren’t too expensive. We were thinking we’d spend 1000 rupees or more in order to have a real good vacation between our work/recuperating time at the house and the travel into the unknown. We’d just gotten the payoff from selling all of our furniture, kichenwares, etc, and we knew we’d be spending that cash until we got to the airport and converted it to dollars. At a serious loss, since the dollar had strengthened a great deal since we’d started spending.

There we were, in Goa, approaching the beach, tired, sad, excited, pained, with a big chunk of cash in our pockets.

Oh boy, did we ever overspend on the room!

The taxi pulled off the main road – the one that dead-ended on the beach – and headed up a side street. Things started getting a bit sere and dumpy. He turned in at a sign that read Lucky Star and I thought he was hijacking us. It happens sometimes – a taxi driver agrees to take you to one hotel but you end up at another one. When that happens, you just browbeat them a bit and they get you to the right place. But he went just past – like 20 feet past – the Lucky Star and drove up onto a laid brick driveway. 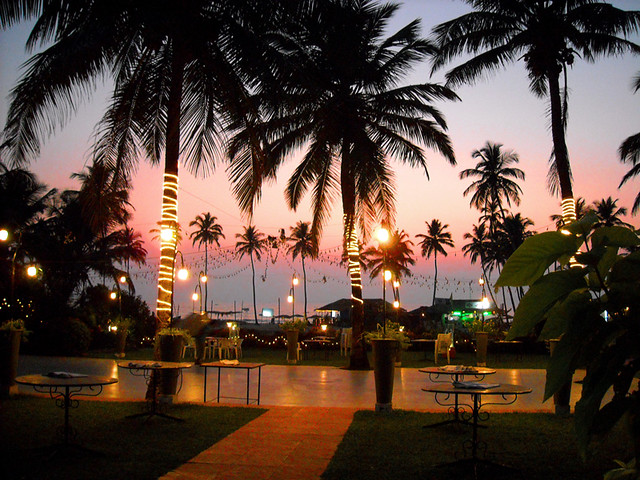 This is Portuguese India. India got its independence from the British in 1947, but Goa was Portuguese until 1961. Yep. And Margao is the real Portuguese stronghold. This resort didn’t just have a Portuguese name; it looked like a delicious blend of Indian beach and Portuguese manor. 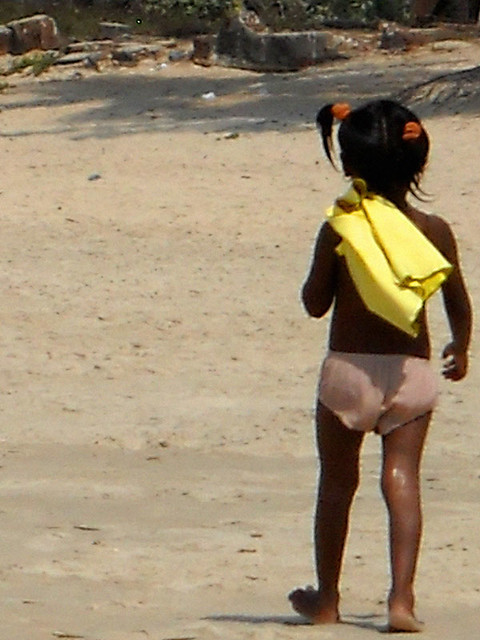 I’d seen something making me think that the Longuino’s Resort had room around 2000 rupees. I was wrong. When I asked at the front desk, they told me the room would cost 3000 rupees. Per night. Okay, this is a resort, I get that. And it’s about $60 US. But we had just been paying 5000 rupees per month for our house! But I did have all that cash and we were going to get fucked on the conversion…

And then we saw the room. It was basically just a nice room, but it was right on the path to the beach and from our neat little porch, we could sit and watch the fishing boats on the water. And I wanted it. 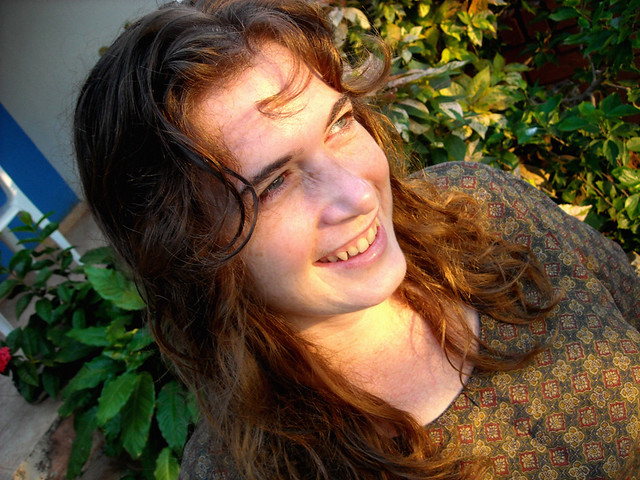 I told James not to ask what the cost was, thereby letting him know it was expensive without putting a figure in his mind. And I signed us in. 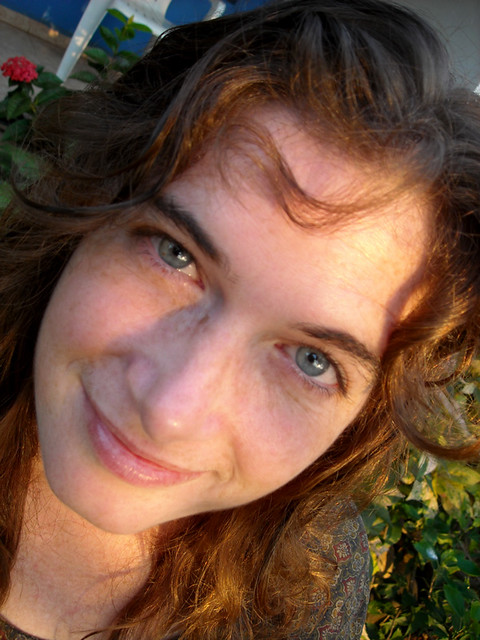 I’m glad. It was what we needed. We spent the next three days lolling about, swimming in the lovely Arabian Sea, drinking Old Monk (a dark rum) in the beach shacks and on sun beds, eating fresh seafood, and petting the cats. Oh, yeah – there were cats. 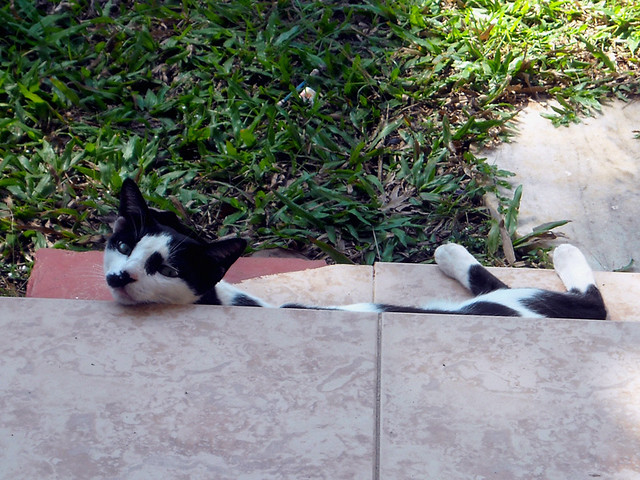 We did all our drugs on this vacation. We still had some modafinil – a gentle speed that is supposed to help you focus when cramming for tests or under deadline at work. That kept us up-beat and excited. We still had some pot – and I don’t think James has written the story of how that came about in a conservative Muslim neighborhood, but he will someday. And we had the Old Monk.

Most of that first day was about showering, swimming, showering again, eating, drinking, swimming…you get the picture. It sounds busier than it was, because between each activity, I sat for long, peaceful periods of time on our porch. I would pet the kitties or just meditate on the water. I healed more during each 5 minutes hearing, smelling, and watching the water while feeling the incredible salt breeze on my face and arms than I had in two weeks of sitting cooped up at home. 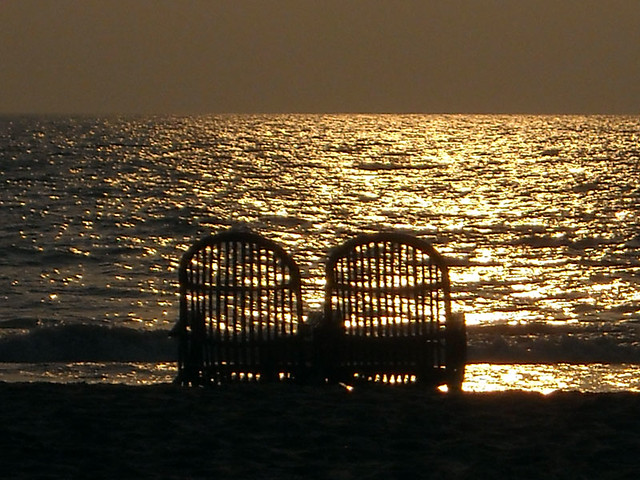 The resort restaurant workers were very invested in convincing us that the beach shacks were unsanitary. I think they were right, but hey – we had to eat at the beach shacks, right? The first dinner we had out there was the ordinary, wonderful seafood experience. The 12 year old waiter (he only worked on the weekends) brought over a platter with the fresh fish from the morning’s catch. The red snapper was so fresh it looked like it was about to flop off the plate, but the baby hammerhead shark made me very sad. 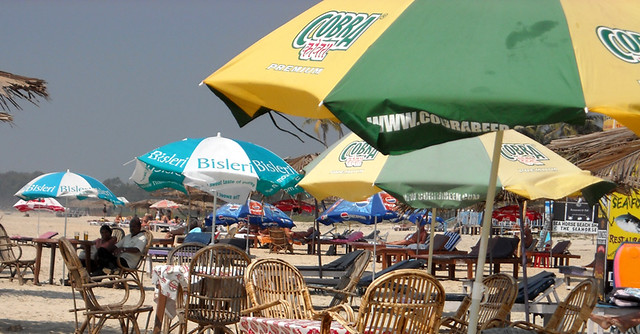 We kept eating well the whole time, but we didn’t eat as much as I would have expected on a resort vacation while smoking pot. I mean, really. We had two meals a day pretty much. Free breakfast was just chai and fruit salad, so I didn’t count it… 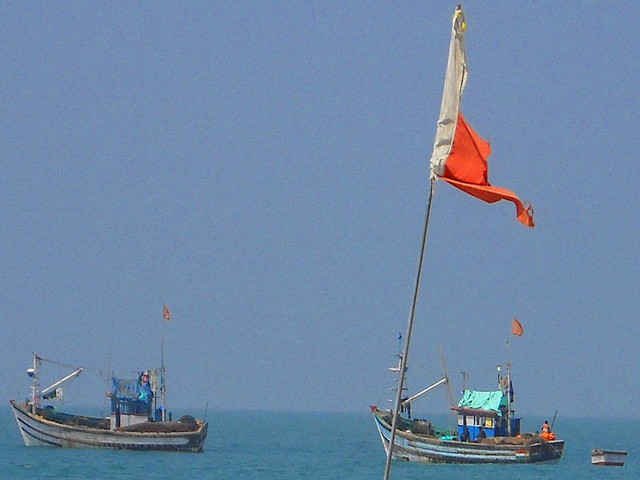 The second day we were there (of three days), we decided to do some shopping. We knew from the time we touched down in Mumbai that we couldn’t buy anything we couldn’t carry. We hadn’t gotten any presents for anyone until right before we left Trivandrum, and still didn’t get much. The shopping is big in Colva, of course. They’re looking for the score – the foreigner who is doing conversions in their head. “I have $500 to spend, and that’s 25,000 rupees, and they want 500 rupees for this hand-knotted silk scarf, and that means I can still buy…”

Well, we’re not quite those people. We were holding cash that was supposed to get converted into dollars and last us a little while once we reached the US. Hopefully. And we’d been spending rupees for 6 months, so the prices felt high to us. Of course, they’d also been through the hardest winter in memory – the worldwide economy was so bad that even their Christmas season was painful. No one made the money they’d hoped or expected, so even our stingy asses were welcome.

We wandered down the road, not stopping very much because most of the shops carry the same stuff. A few women badgered us with “Look tomorrow, come back later, you promise?” We just kept walking, head-shaking smiles for everyone.

We saw a shop with a few things we hadn’t seen elsewhere and entered. It’s a tent or lean-to with some wares out front on tables and some inside on the fabric walls or shelves. I picked up a little box (shopping for a boy is difficult and shopping for a girl is just as bad if she isn’t a glittery jewelry girl) and opened it up. The inside had spikes on both bottom and lid, but they didn’t touch when I closed the box. I was amazed – what could you store in something like this?

When I questioned James on it, he answered without laughing at me. I appreciate that, being as though I’m a 33 year old woman who first smoked pot about 12 years ago, and one could expect that I’d know a thing or two. But I have lots of holes in my lazy-ass drug knowledge, and this box was a revelation.

You put a bud in it and put the lid on. When you twist the lid, it breaks up the bud so you can wrap it up as a joint. Hey presto! Neat!

(In my defense, I must mention that I’m a pipe girl when I smoke, which isn’t all that much. So it’s not really that surprising that I wouldn’t recognize joint-making paraphernalia. Not that I’m defensive. It’s just that…you know.)

Anyway, the guy running the shop asked if we smoked, and one of us answered, “Not tobacco.” Okay! New friend made! This guy didn’t officially sell anything, and he swore us to secrecy, but he said he knew people who sold things and what did we want…

I do not understand.

So we bought the nicest, smoothest, tastiest (I usually hate the taste) hash I’ve ever seen in my life. It was a lot – about the size of my thumb – and it was about $10. Jackpot! 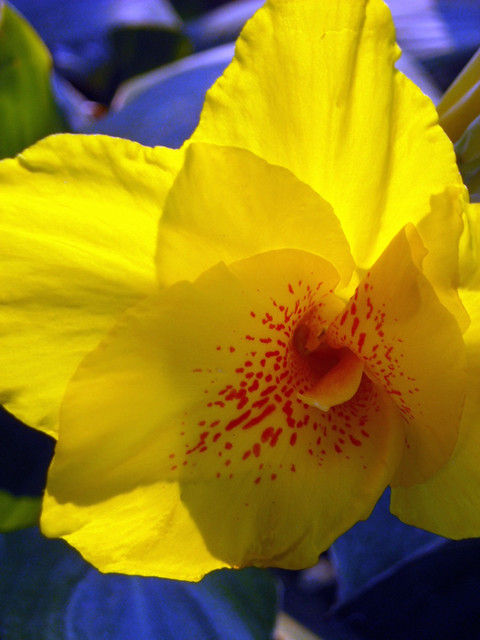 We couldn’t…just could not…smoke it all in the time we had. So sad!

So the second and third days were that much more slow, easygoing, and enjoyable. I bobbed in the buoyant saltwater of the Arabian Sea, cautiously near shore, never over my head. The surf was gentle enough not to strain my stitches ever, not even once, but good enough for bodyboarders to have fun. 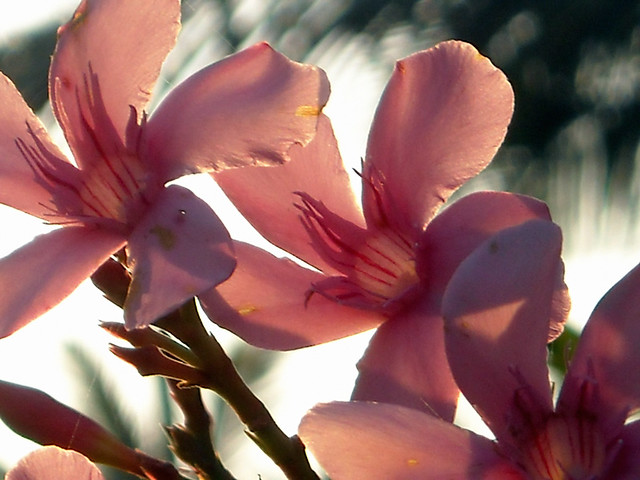 The beach slopes gently and that slow fade continues under the water. We could get a nice ways out without losing our footing. The same slope makes for violent times during monsoon, though. The water pushes waaaaaay up on the beach. They take the shacks down completely because the water batters the beach so badly. This battering is a brilliant, wonderful thing, though, because I have never in my life (mostly on the west coast and in Hawaii) felt sand so fine and soft and smooth. The pale gold color felt good on the eye, but oh! The toes! 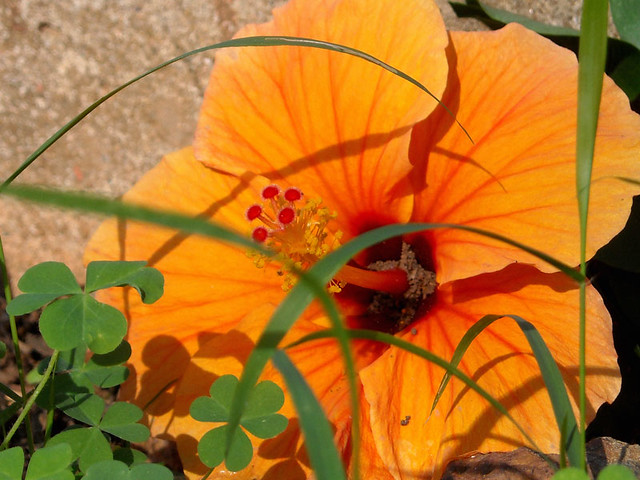 On the third day, we walked back by the stuff-shacks and I got talked into looking into a shop. The woman next door started talking to James and I turned to leave pretty quickly. The tone was getting edgy and, sure enough, as I turned I heard James say, “I didn’t promise – I wouldn’t do that!” She was trying to guilt him into buying something and poked his honor button instead. He was upset by her sales technique and I recognized that it was time to get off the gauntlet of product. The way the women approach, follow, and try to manipulate you in a language they have a limited grasp of (though some were very proficient)…well, it was the downside of Goa in the same way that the rickshaw drivers of Delhi made me want to get out of town as fast a possible.

Finally, we had gifts to give. We’d ingested the last of our speed/depressants/hallucinogens. We were leaving India. We left Colva mid-morning, and though the taxi driver was early, we stretched out those last moments. We idiot-checked the room, closed things up, and piled our luggage on the bed. We walked out to touch the flowers. We scratched the kitty.

In the last moments of our stay in Goa, we sat on the porch, absorbing the Arabian Sea as though we could thereby take it with us.

In some ways, we did.

More photos from the sojourn in Goa.