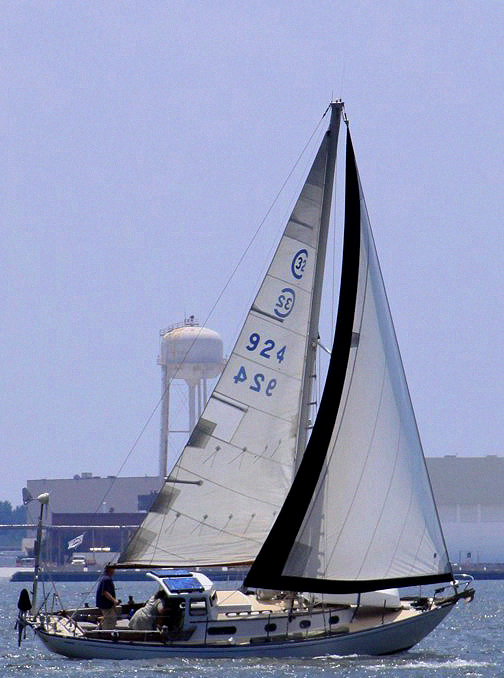 So,
Saturday July 25th 2009 was the 35th annual Rebel Marina’s Crab Regatta!
It was a spectacular sailing adventure and the Willoughby Bay in Norfolk, VA was riddled with hundreds of sails with almost as many different kinds of sailing vessels!!!

We’re in the process of re-powering S/V Itinerant with a larger prop for our Yanmar 3GM-30 so unfortunately we had to (got to) sail both out of and back in to our slip for the “race” (note quotation marks). When we “sailed” out we got hit by a few variable gusts that spun us in circles three or four times, got us caught up in the rigging of S/V Norfolk Rebel, bumped us into the tide wall and really set Dena and I off on a bad foot but of course once we got out of the marina entrance the sailing was amazing!

The “Race” is one of the most interesting and hilarious experiences that one could have on the water! Each year they change the rules and the course to fit their needs and the only real rule is that you !!!MUST NOT!!! take the race or the rules seriously!

The flag ship for the regatta is, of course, The S/V Norfolk Rebel, the worlds only “Tugantine”, a 68 foot steel gaff rigged schooner/tugboat that carried the first marker on her starboard aft quarter for most of the race, meaning, all the racers had to (got to) follow the Rebel in pretty much single file until she dropped the anchor for the marker (affectionately known as PHRED, a recovered aircraft carrier fender).

Each of the boats in the “race” is given a “handicap” prior to the race and you are disqualified if you don’t follow through with your handicap as described and implemented by a panel of judges that are hell-bent on applying their rules, unless of course you bribe them with pretty much anything BUT MONEY.

Our handicap was a relatively easy one being as though we were “Virgins to the Crab”, we had to (got to) make our own “Crab Hats” and ware them for not only the race but the after party as well. Unfortunately, my crab hat was blown off my head and into the water as we exited the marina so we were disqualified before the race even started.

Some of the more interesting handicaps were; one boat had to have it’s entire crew (even the men) ware coconut bikinis and hula-skirts and every time they passed a marker the crew had to give a hula dance for the judges on the comity boat. Another boat had to splash any passing boat with a bucket of sea water and I got hit by them with a full 2 gallon bucket of warm Willoughby Bay water. At one point I was laughing so hard I thought I was going to pass out!!!

After the “race” was “completed”, a mind boggling event in itself, a party did ensue! 400 pounds of Chesapeake Bay Blue Crab, about a ton of side dishes and as much rum as any of us could consume, was indeed consumed and the docks rang with the sounds of sea shanies well into the night.
The Crab Regatta is by far the best sailboat racing experience the crew of the S/V Itinerant has EVER had so if you’re in the Southern Chesapeake Bay in July I highly recommend Rebel Marina’s annual Crab Regatta!

The hangover was glorious…