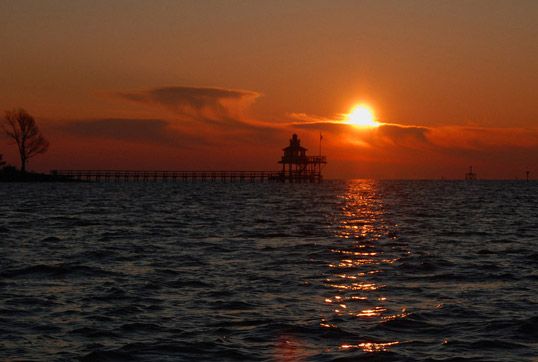 When last we wrote, the snow was beginning to fall across our lovely floating home.  Since then, we’ve had drifts and ice-pack, washed her down in saltwater to break up the chunks, and failed, yes failed, to shower.

Reedville was somewhat inviting.  The first walk we made was for dinner – the broken propane fitting pushed us off the semi-cozy boat and into a much cozier fireplace-front seat at the restaurant.  Well-prepared food and a very nice staff, the place is called Tommy’s and yes it’s the only restaurant in town.  I recommend it if your purse-strings are loose – we swallowed hard and realized that we were in trouble but in the end, a meal well worth it .

See, we were at the only food-serving establishment within walking distance.  We could do sandwiches, sure, but we hadn’t stocked enough bread for days on end of that.

And the other piece of bad news – the marina’s showers are in the marina’s bathrooms.  Now, I am very thankful that the water was not turned off in those bathrooms, because I don’t like using the boat head for solid waste (like the euphemism?).  However, these bathrooms are unheated.  With concrete floors.  There was nothing – not an itch nor an odor – that could induce me to step out of my clothing, put bare feet on sub-freezing concrete, and take a lukewarm shower.

It was all about the whore-bath.

Anyway, we spend our first night at Reedville Marina with our brows raised – the wind made us keep our eyes on our electrical multimeter.  The wind generator kept the battery just…barely…under the danger high voltage range.  The propane cabin heater (Sig Marine Cozy Cabin, in case you’re interested) did a fabulous job of pumping heat into our environment.  The propane heater really piles the warmth up at the top of the cabin, and it spreads downward from there, so it takes a little while for the cabin to really feel warm to someone sitting on the berth.

Next day we made coffee (I’m so glad we had electricity, or we would have been completely out of luck for that!) and decided that we would go on a photo expedition just as the sun was coming up over the rolling hills of snow.  We had six inches of snow on the boat and thanked each other for deciding to put the sailcover on.

Reedville is beautiful in white, with some of the houses looking like they were meant to be under snow and others looking forlornly toward summer breezes from their buried rocking chairs. 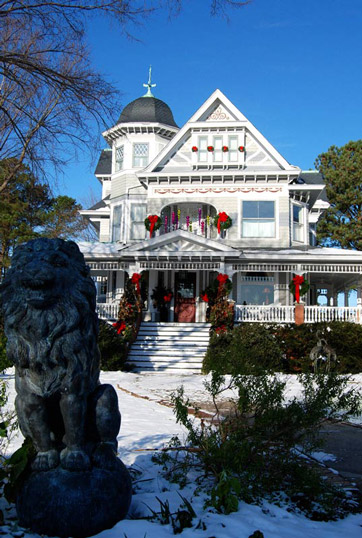 We got some nice shots (check out the slideshow), especially at the Reedville Fisherman’s Museum.  We didn’t go in – they weren’t open so early – but the outdoor exhibits include a hand-build John Smith adventure boat, old-fashioned fishing boats, the skipjack Claud W. Somers, and random nautical debris, including a charming pile of oyster shells. 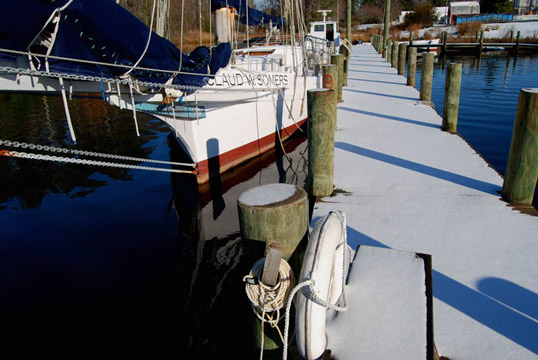 We also discovered that – lo and behold – the people at Tommy’s weren’t lying.  There was no other option for food.

Another thing we saw as we strolled and slid along the middle of the road (the sidewalks being narrowly and spottily snowshoveled and the cruising guide having said that cruisers were known by that tendency) was a Festival Hall.  The board out front advertised the following:

The date?  Same day!  Yowza – it’s been years since I’ve gone to anything of the sort…I’m snowed and blown in…let’s go!

We got back to the boat and did the aforementioned salt-watering of the decks.  James kept going after I was done in, and he cleared the decks of snow completely!

And what’s really great?  Only an hour or so later, we got a visit from a salty guy named Walt.  He had stopped by and talked with James – gotten a little of our story and why we were there at such an ill-chosen time, being the middle of the first solid freeze of the year.  On this visit, he invited us to attend the concert and then to go with him and his wife to his house…for a hot meal.

I mean, yes, please and thank you.

The Chorale was everything I’d hoped for.  It was people in the community singing together.  I even had a terrible moment of sympathy.  The pianist was wonderful – she obviously plays a lot, has a good relationship with the keyboard.  And I’m not going to put her name in here, in case she googles herself some day.  I don’t want this to hurt her feelings, but I have to put it in here anyway…because I felt her pain! I wasn’t watching in the moment, but here’s what I think happened.  I think she turned two pages at once.  What I know is that the soloist was soloing in French, quite the achievement of the event, when suddenly the only accompaniment – the piano – was not playing the song she was singing.  And of course, it was a christmas song and everyone knows how those go.  There was no pretending it was a “modern” interpretation or something.

A cold wave of heavy fog flowed across my forehead and into my neck and down from my shoulders to my hands and my breath caught in my throat.  Can you imagine?  I had such a visceral experience of that simple mistake that my fingers clenched.  The pianist did a far better job than I did – with one hand, she kept playing what she could and the other hand found the right page.  I can’t say her hands were steady, they shook for certain, but she picked up the song and played!  She played the rest of that song and the rest of the evening with energy and surety.  Bravo!
Mary and Walt didn’t rush us out afterward – we were able to mingle a bit, get some punch, talk a little.  The marina’s owner was there.  He was sitting next to me during the singing.  After a little time, we rounded ourselves up and Walt brought the car around.

At their house, we had a lovely conversation about sailing, organs and player pianos, sailing, the finite number of unique plots, sailing, celestial navigation, sailing, sailing.  They have a Westsail 32 and have traveled south in her – ah, to be going south!  We spoke of the cold and drank rum in front of the warm raging fireplace.

The other guests were a couple, also sailors.  The man had captained the skipjack at the museum for a decade – he told stories about races on the John Smith adventure boat, too.  The big score of the night (besides the great company, hot fire, good food, and sipping rum) was due to their friendship with yet another person – the owner of the marina on the Little Wicomico (weh-calm-ick-o).  He had our propane part!  And they drove us out to another warm living room with more wonderful people.

And then the next morning, we made an early start.  It was forecasted to be 26 degrees at the time we left, and I’m certain it wasn’t more than that.  We motored out of the channel, slowing for a couple great shots (again, see slideshow), and then raised sail and started north again.  It was a long, plain day of cold, cold sailing.  Yep.

On arrival at Spring Cove Marina, we got the best welcome – a bundled dock guy wide-eyed and willing to let us stay anywhere we liked.  We just kept her there on the fuel dock, since it was the only part of the pier cleared of snow, and settled in… 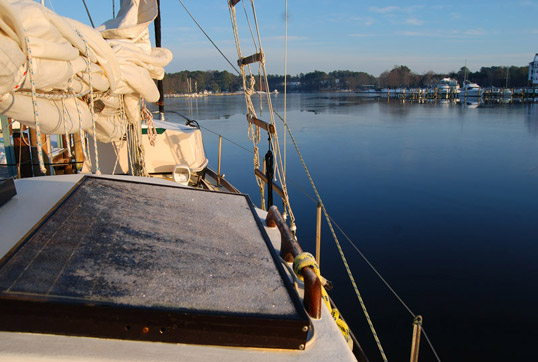