Now that we’ve been working on this project for weeks, I wish I had posted mini-project updates as I went.  Since I wish I had, I’m going to split it up into pieces and backdate them to the actual dates done.  The first piece…demo. 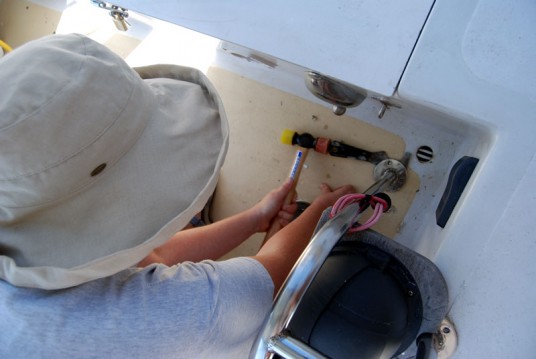 We removed all the fittings that we thought would get in the way.  This turned out to be “Removing Fittings – Part 1” because I hadn’t thought about painting the whole footwell!  Anyway, some fittings had been installed with 5200 and some with epoxy and some without any bedding whatsoever.  Above, I’m using a scraper to break the bond of 3M 5200 that kept the stainless binnacle stuck to the cockpit sole.

Here’s a short 101 on re-coring.  Most decks, cockpit soles, and cabin tops are sandwich construction, meaning that there are two layers of fiberglass with some sort of core material.  Our decks and cockpit sole are (were) cored with plywood and our cabin top is cored with something called honeycomb and which I can’t find good information on.  If you know what kind of honeycomb was being used by Danboats in the early 1960’s, let me know.

When the core is punctured (to install fittings, for example), water can make its way under the top layer of fiberglass.  It will eventually rot the plywood or other material, creating soft, squishy, and/or very flexy decks.  Our cockpit sole flexed terribly under our feet, feeling very soft.  And so we knew that we would have to replace the core.

Best case scenario on re-coring, one cuts the top skin carefully and evenly, removes a portion of core, replaces it with the same material, and glues the top skin back into place.  That wouldn’t work for us because we were cutting the inside angle along the sides and because we were pretty sure there wasn’t much good stuff.

Our plan – remove the top skin and throw it away, leaving a lip under which we would slide the new core material.  Use Azek (pvc lumber) in place of plywood because it doesn’t rot. 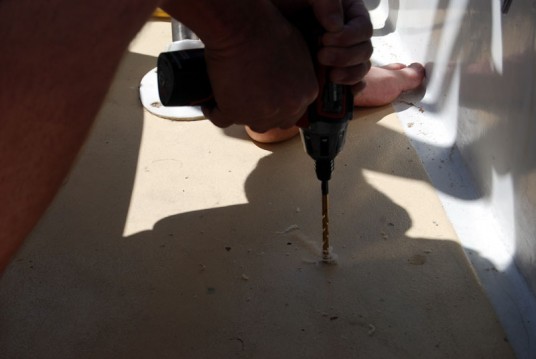 James is making the first hole.  We used every tool we own (and one that we borrowed from David Bitner – thanks, Dave!) in cutting the top skin off.  We found that the router chewed through far too much material and couldn’t get very close to obstructions.  The Dremel whined and cried and popped its brushes.  Dave’s grinder did the job with little fuss but a huge amount of muss.  And last but not least, our little Milwaukee reciprocating saw got into the hard-to-reach places, if at the expense of delicacy and control.

We also had to cut around the two fittings that we couldn’t remove.  Neither the fuel fill nor the rudder post fitting could be removed.  We weren’t about to start a rudder project in the water (not wanting to dive for such an important part were it to fall to the bottom of the Chesapeake), and the fuel fill was fine, except the bolts being frozen. 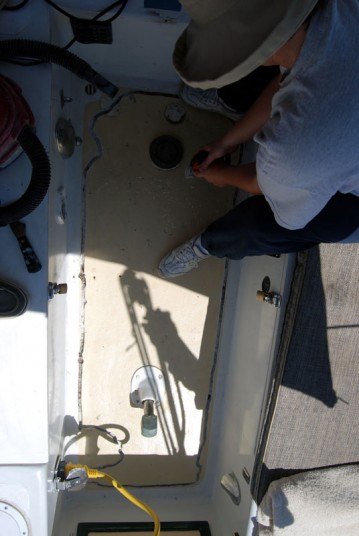 And then, when we lifted the top skin… 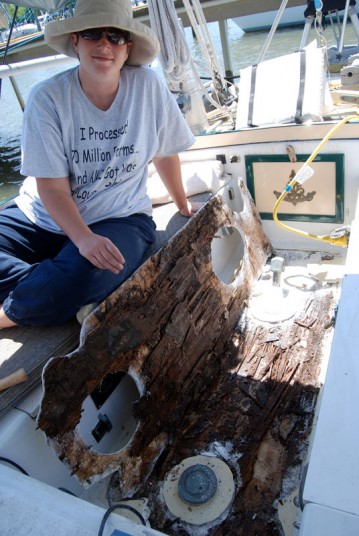 And just so, when you’re laughing your ass off, you can feel the proper hilarity: 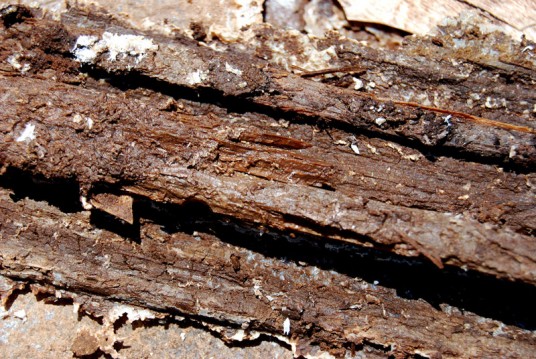 “Looks like we were right, James.  The cockpit sole WAS a little soft!”

The next step was to scoop up all the soft, wet, loose pulp (seems like overstatement to call it wood) and scrape out any bits that remained.  We quickly realized that there was no good wood and we did the top-skin-cutting procedure all over again.  At least this time we skipped the wimpy tools and went right for the massive grinder.

Cutting all the way against the sides gave us a new option.  We could cut the core material into fewer pieces, since we weren’t going to slide them under the lip.  We could also go with a slighly thicker Azek and build up the cockpit sole a bit higher.  I’ve been wanting it higher since we bought the boat.  This will get my eyes above the hard dodger, this along with the grating I’m going to build.

Even with the grinder, there were bits that had to be removed the hard way.  Of all the demo, the fuel fill gave me the biggest headache. 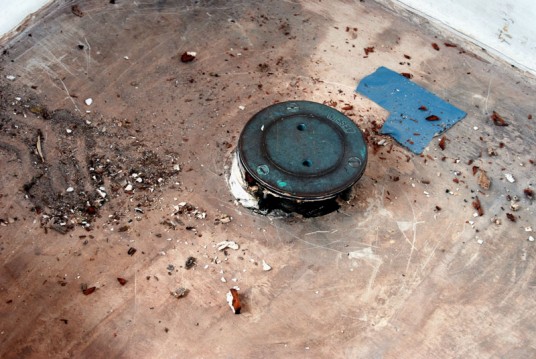 That’s because it had been repaired by someone, at some point.  Check out the strange blend of materials. 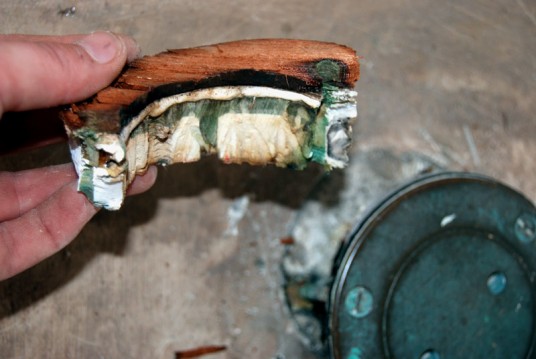 Of all the pieces we had wanted to save, the cockpit drains were at the top of the list.  Unfortunately, they had also been the focus of multiple “drill and fill” operations in the past.  For the uninitiated, drill and fill is a method of putting off the very project we were doing.  In this procedure, one drills through the top skin and into the core material.  One then pumps as much epoxy into the core as possible.  There are specially formulated epoxies for this.  We used Smith’s Penetrating Epoxy on Sovereign Nation in 2002 or 2003, but should have replaced the bad wood.  There’s also Git-Rot and a million others.  And of course, West System will tell you how to make their epoxy penetrate better, too.

I’m going to come right out and say it.  Drill and fill is half-assed repair work.  Sooner or later, someone will have to get in there and break out all the epoxy you injected.  And that person?  They’re going to be cussing your ass.

So anyway, here’s the section around the cockpit drains after I spent a ridiculous amount of time cleaning them up.  Which had to be done while sitting on the lazarette hatch and not putting any real pressure on the bottom skin, by the way.  Quite the trick. 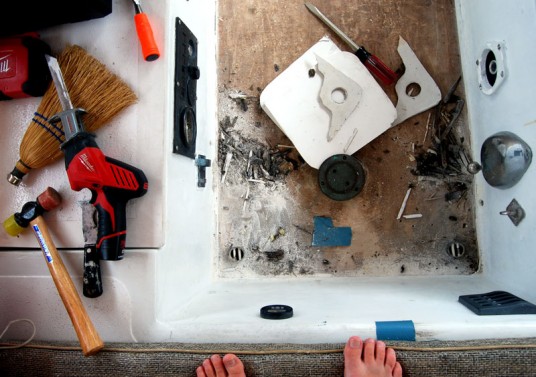 And of course, the fact that so much drill and fill had been perpetuated around the drains meant I couldn’t leave them as they were.  Obviously they didn’t keep the draining water from entering the cockpit sole.  So off I chopped them and…well, the installation of the new drains is a later story.

We had a millimeter or two of actual wood along the edges in some places.  Here’s James, chiseling out the annoying remains of the original core. 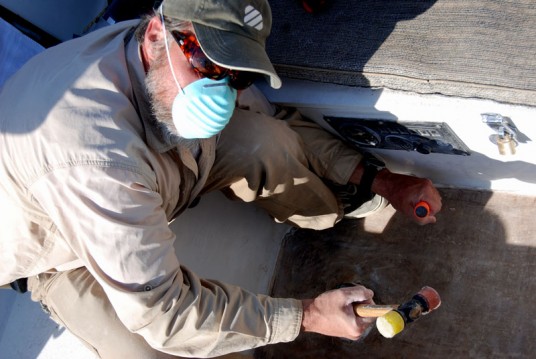 I couldn’t get to the nuts holding this fitting in place, so we had to leave the top skin of fiberglass in place under it.  I carefully etched out all the wood, though, using this mirror to check my work. 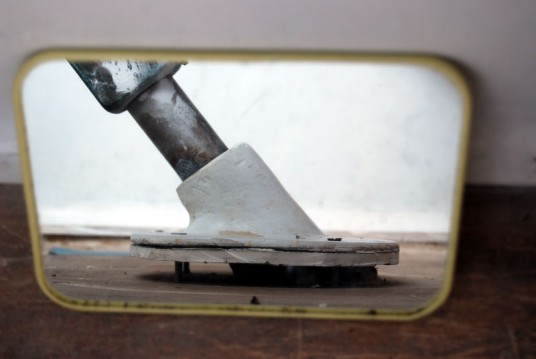 And then, finally, we had a clean bottom skin onto which we could apply our new Azek core and fiberglass top skin.