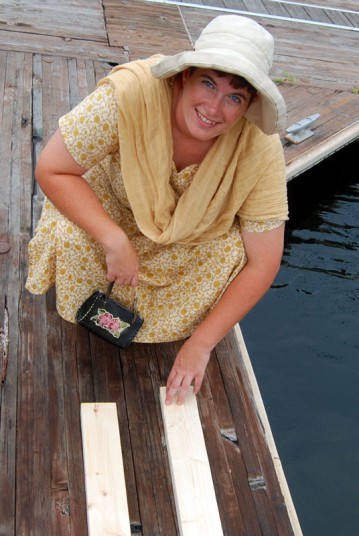 See how happy I am?  Why am I so happy?  I don’t think this post will really answer that question…so it must be because I love the photographer. 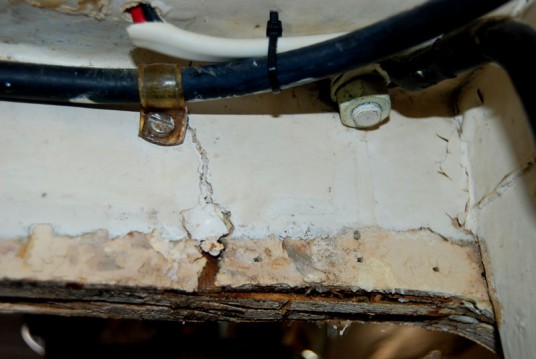 What is that, you ask?  Why it’s the crack in the bulkhead under our mast.  I uncovered it a little while back when I took the veneer off.  That’s the forward side.  The aft side is no better. 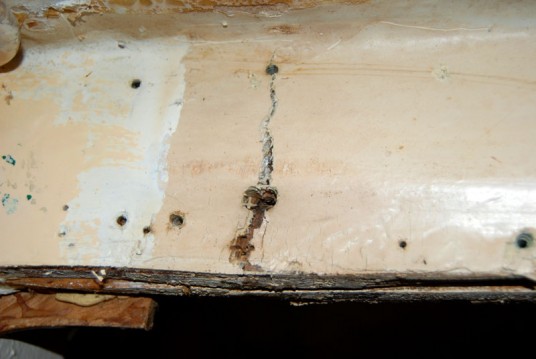 Remember way back when?  When we got knocked down and broke the port side forward lower chainplate right in half.  Weeeeelll, that also had the effect of pulling loose the bolts holding down the mast step.  We tried tightening, we tried loosening.  We learned that two of the bolts were installed between the horizontal and vertical parts of the compression system.

And untouchable.  In order to re-seat the step, we were going to have to take apart the compression system.  Which you don’t want to do with the mast in place.

So we researched getting the mast pulled and every yard we talked to quoted megabucks.  The last quote was such an insult that we left the marina we were berthed in, in order to get away from the madness.

Then we read about and discussed pulling the mast using a buddy boat (I’d do it with two boats, but our one “buddy” wasn’t really an option).  And then it was all about building an a-frame mast tower on the deck.

There are plenty of resources about doing this already on the web.  Suffice to say, we went and bought some 2x4s and a bunch of big ol’ bolts.

And we cut and we bolted.  After wrestling this contraption onto the deck, we attached the mainsheet rig to the apex and prepared to haul it up against the mast. 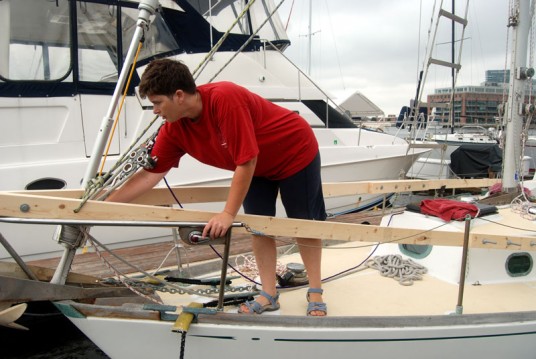 And up it went… 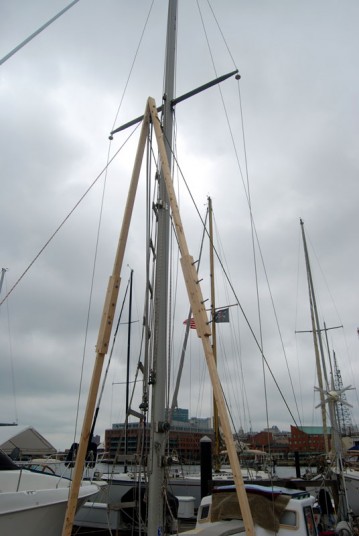 The rig was beautiful and would have worked perfectly.  It was completely stable fore and aft, port and starboard.  But alas.  It was too goddamn short.

We needed to be able to pull from several feet above the spreaders, but this thing barely reached them.  So it was back to square one.  Now that we’d moved the boat, however, the nearest boatyard was Tidewater Yacht Services.  So perhaps that other yard did us a favor by running us out of their marina with their silliness.

On our way in, we had some military scenery. 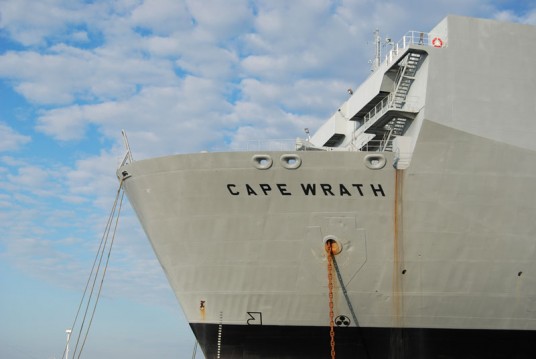 Ominous, yes?  Those guys are always good with the names.

And we met a yard worker named James, who drove the crane over and left.  We waited for the yard’s rigger. 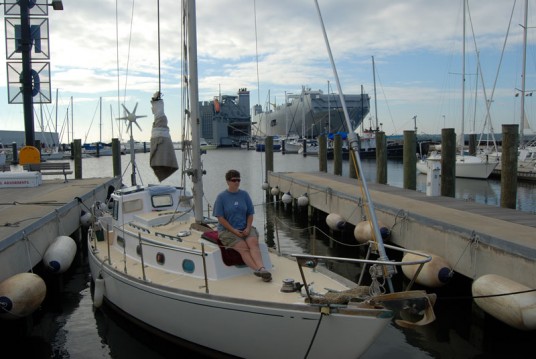 The whole experience was fantastic, once it got going.  The workers were efficient and treated us with respect.  We’re the kind of boaters who want to do our own work and many other yards wouldn’t have let us aboard, let alone take part in the mast’s actual removal. 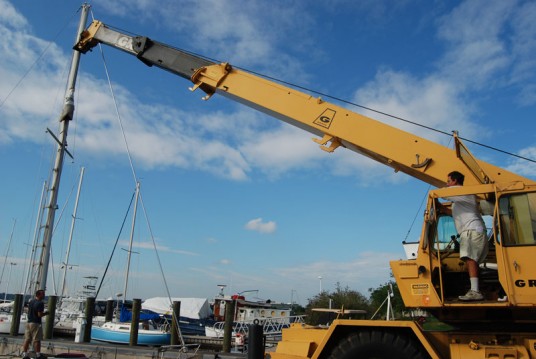 You are looking at James (right) and Steve from Tidewater Yacht Service.    Steve is the rigger and James seems to be a crane operator, though I doubt that’s the extent of it.  For one thing, he climbed our rickety ratlines after they’d been disconnected from the chainplates and were hanging loose at the bottom.  This was a nerve-wracking procedure. 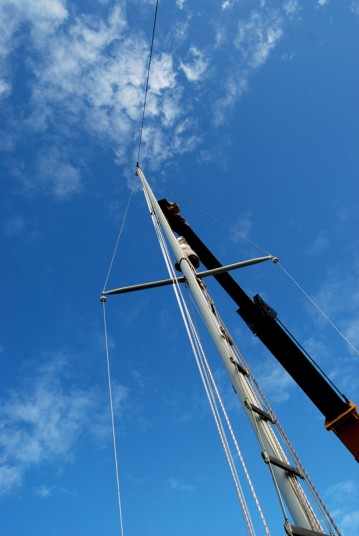 The crane is in place, the rig is loose, and the lower shrouds are disconnected. 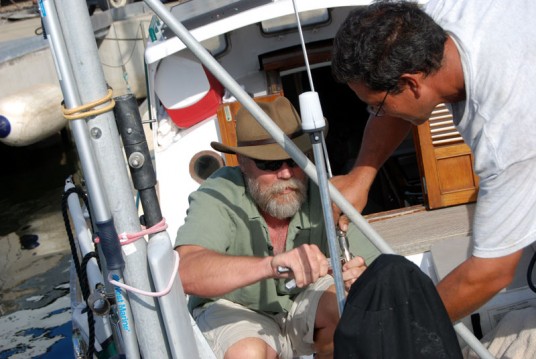 The two Jameses worked together on disconnecting the aft stay.  Removing the SSB antenna from the insulator at the base of the backstay was a bit of a science project. 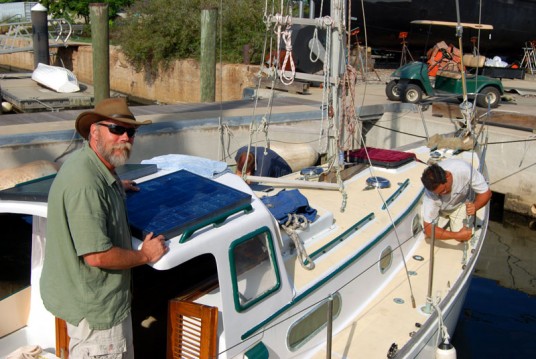 The last stage was removing the upper shrouds, and he’s still smiling. 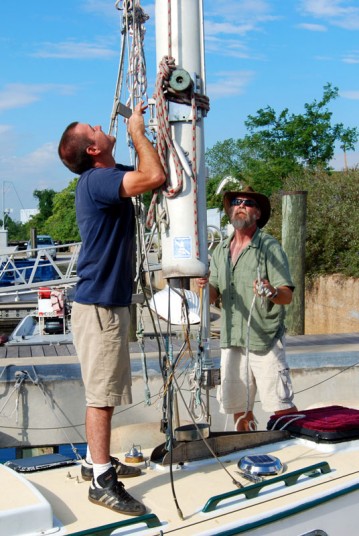 I guided the wires through the pipe between the mast and inside the boat, then ran back on deck to get the photo above.  With the backstay removed and the forestay, roller furler, and foil pulled to the mast, the crane lifted the weight of the mast straight up.  The aluminum extrusion slid out of the stainless step without a hitch. 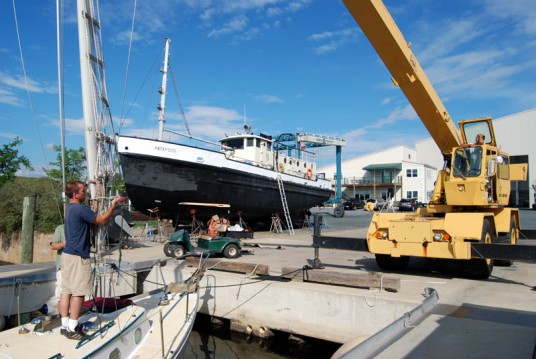 James and Steve guided the base of the mast toward the bow and the other James lowered the weight of the mast directly onto the hard dodger.  It worked.  There were handshakes and thanks, some flashing of plastic money, and we motored back to our slip. 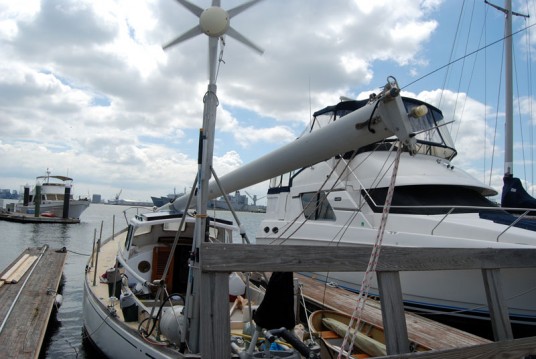 We stripped the mast of all parts that could get caught on things as we maneuvered it off the boat. 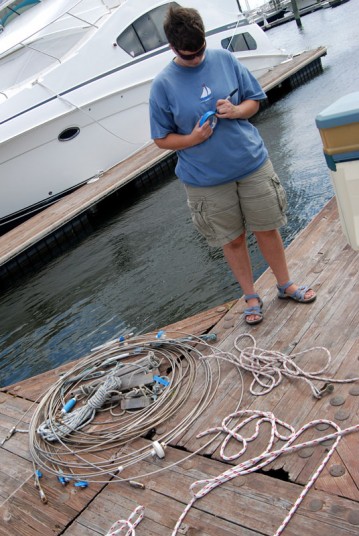 We marked all the pieces as we took them off: spreaders, stays, shrouds, topping lift, and all the halyards. 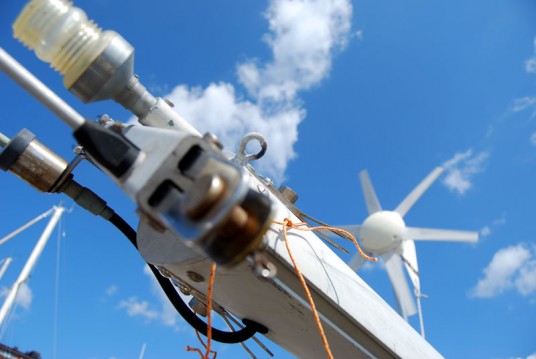 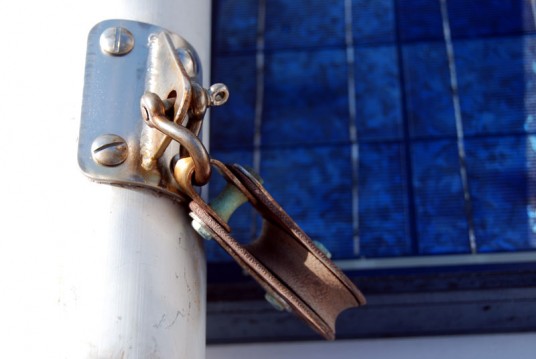 We left this block because we were going to use it later…keep your eyes peeled. 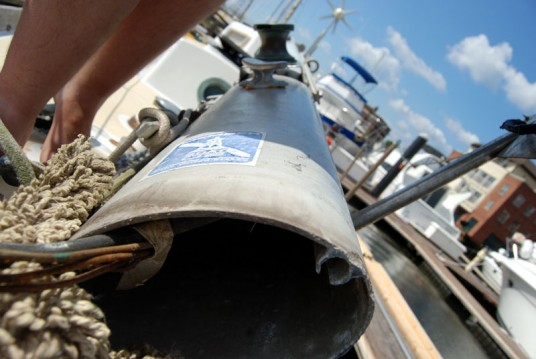 Looking up the mast from the base, it looks like it’s in pretty good shape.  The wires are in good condition and it’ll be easy to put that back together. 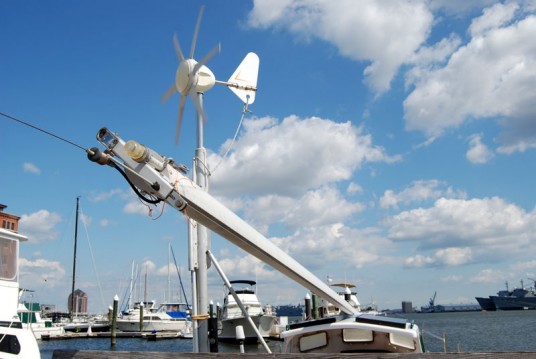 Next step – get the mast off the boat.  This is a big deal.  This is two people maneuvering hundreds of pounds of expensive bulk from one moving surface to another moving surface during peak water-taxi hours.  Meaning: wake.

We get tossed around a fair bit in this slip, and we knew we couldn’t count on a calm spell.  We had to be ready to keep working and protect the mast and boat as best we could.  So we didn’t take any pictures during that part.  So sue me.

The answer was to use the toerail as the fulcrum point and then treat the mast like a lever.  We slid it forward until it touched the ground and then heaved the high side off the boat.

This is how heavy that mast was: 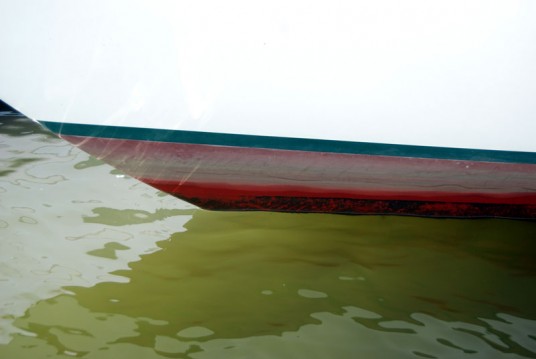 Taking the mast and rigging off raised our waterline by three inches!

Once the mast was on the dock (so much easier said than done), we had to move it into position.  Note the whisker pole topping lift sheave – the one you’ve already seen. 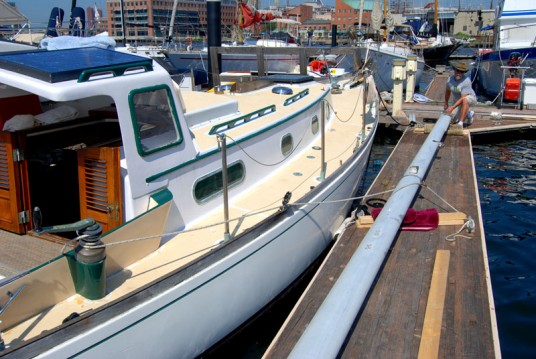 We had to pull the mast onto the finger pier so that it wouldn’t block traffic and so that we could make sure it didn’t get bounced into the water.  Shiver. 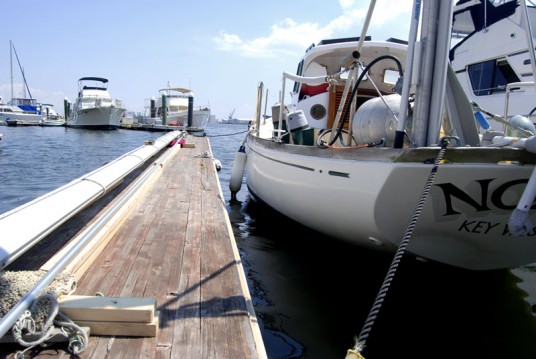 Our boat is in bits and pieces, but they’re well-secured bits and tightly tied pieces.

Then the storm hit and we took the rest of the day off.  Next, removing the mast step from the deck.