When last you saw us, we looked like this: 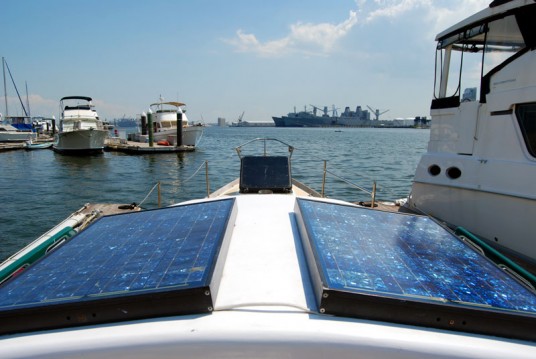 Once the mast was secure on the dock and the storm passed, it was time to remove the mast step.  In order to do so, we first had to remove the compression posts below decks. 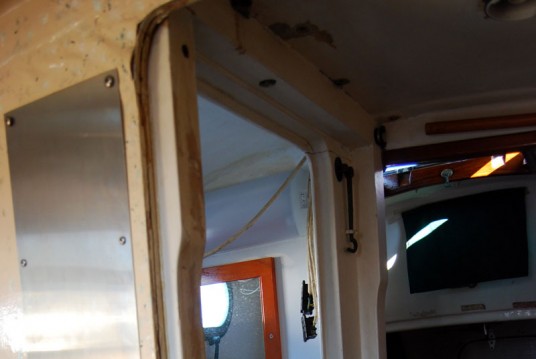 In the picture above, the compression posts are the pieces of wood standing vertical.  They have a curve to them that makes them wider at the top.  Note the bar sitting across them at the top.  The mast step is bolted to the deck via the holes you can see (sort of) in the picture, but two of the bolts come through the mast step, through the deck, and through the compression bar, where the washers and nuts appear.  Of course, you can’t see that, because the compression posts are right underneath those nuts.  This is the whole reason we have to take everything apart – because we couldn’t tighten the bolts from the top and we couldn’t get to the nuts from below.

The compression posts are well supported by the bulkheads (one of which is cracked, remember?) and so we commenced to scraping paint away where we thought the fasteners would be.  Then we dug out the bondo-type filler someone had packed on top of the screw heads.  Then we tried to move 50 year old bronze fasteners in damp, swollen wood.  Every fastener was an adventure. 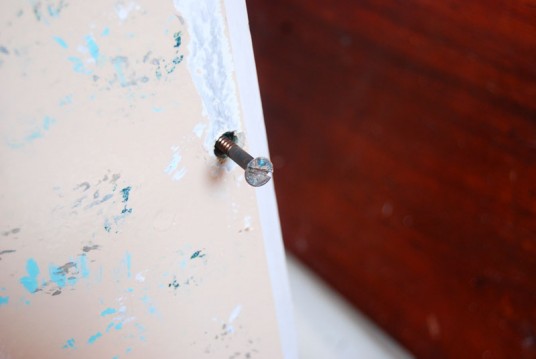 Turns out the compression posts were attached to the bulkhead, but also to the door frame for the head.  We ended up struggling 24 of these fasteners out of the two posts.

Once we had all the fasteners out, the posts creaked their way free.  First the aft post… 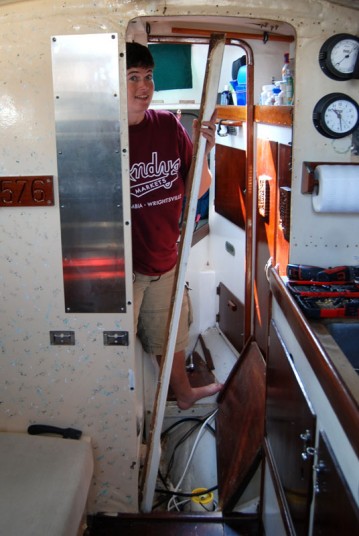 Note that the wood is darker at the top – that’s where water has been leaking in.  The posts are bad-ass oak, so they’ll be fine.

The forward post was a pain in the ass to remove because the fasteners had been fiberglassed over when a previous owner had altered the forepeak.  Our Chesapeake has a double berth rather than the usual v-berth, with a cabinet to the starboard side.  When we finally cussed our way through that process, James pulled the post, which looks to be in fabulous health.  Yay! 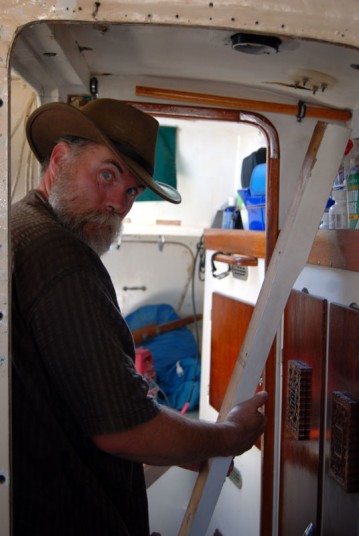 And that gave us access to the hidden nuts.  Some very light sweating got all but one bolt out.  The bolt that had pulled up in our knock-down was a mess because we tried so hard to get it to re-seat.  Eventually, with somewhat heavier sweating and slight sharpening of tone between us, we got that damn thing out. 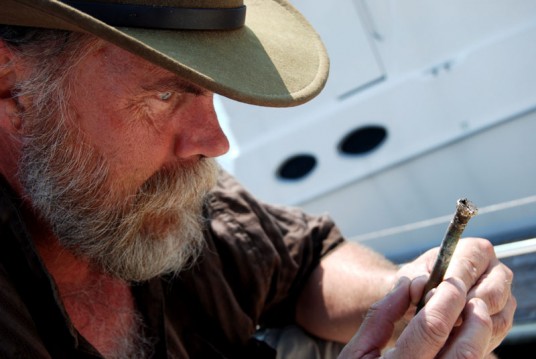 Chisel and scraper brought the mast step loose.  It was not bedded with an adhesive, just with Dolfinite. 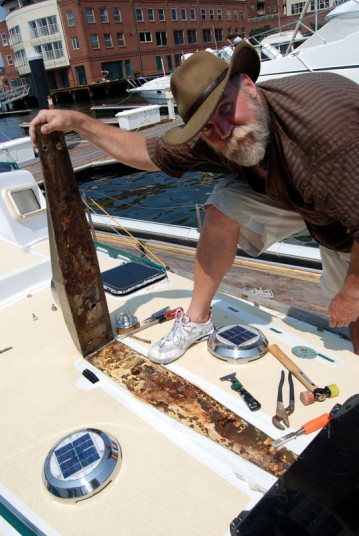 With the mast step unbolted and removed, we could now knock the compression bar loose.  It isn’t fastened directly to the deck, only to the mast step.  These three pieces of oak are getting the royal treatment.  We figure we’ll put a clear sealant on them and always know their state of health at a glance.  It’s not like UV is a problem up under there! 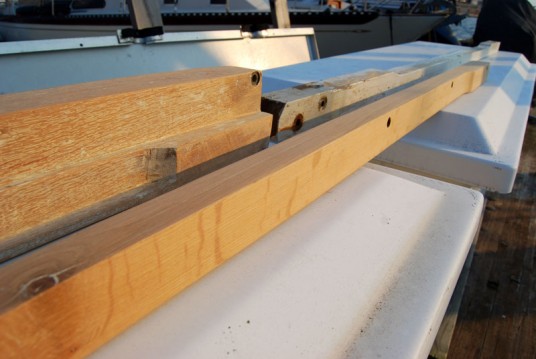 I took the head’s door frame apart and chiseled out the delaminated fiberglass skin that covered the bulkhead.  Anywhere the fiberglass has rippled, there’s likely to be some reason, so I wanted to see all of it. 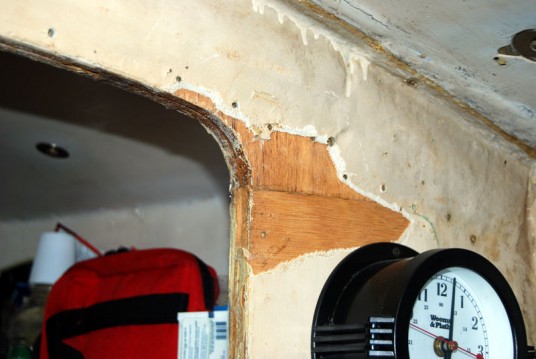 Not bad.  This side isn’t wet and molded.  It’s been under a lot of pressure, but I think it will be fine once the other repairs are made. 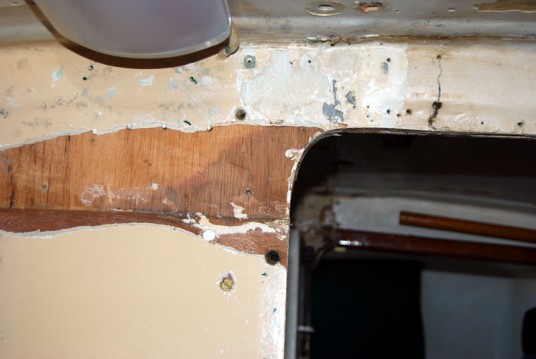 Not good.  But I expected it.  This side is wet and needs to be replaced as part of the repair.  I didn’t cut up any higher because that section is very thick (it’s called tabbing, and it’s extra fiberglass that holds the bulkhead to the cabin top).  And here’s the other side: 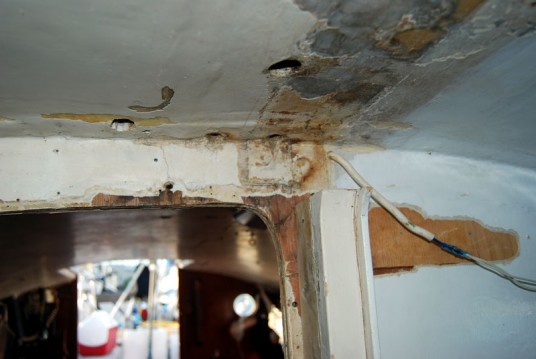 You can see the corresponding rot on this side, though I put the door frame back on before taking the pictures.  The wood on the right of the photo is fine, though.  The plan is to cut the tabbing and chisel out the plywood about three inches back from the rot on one side and about four inches back from the crack on the other.  Once that wood is replaced, the bulkhead should have most of its strength back…except…well, that will wait until below.

And the other bulkhead looks fine. 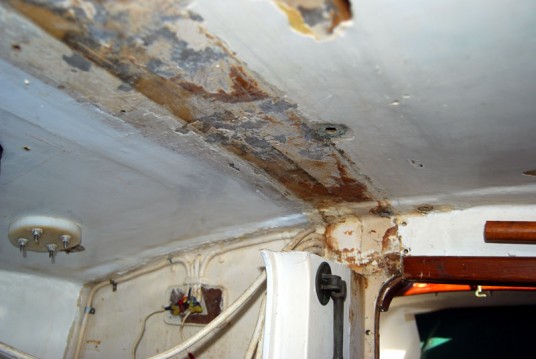 No rot, doesn’t give when I poke it with an ice pick.  Good stuff.

The propane tank used to be under the mast, but that was a sucky place for it.  We moved it to the aft deck and left the bolts as they were.  Turns out this was not the best move – the area around the bolts was sopping wet.  That’s okay – it’s a honeycomb material and doesn’t rot, exactly.  It’s strange stuff, but we didn’t want any more water getting in there.  We allowed all that to dry for a few days and it seemed fine when we moved on.

One of the things I love about working on boats – things make sense.  We’re not dealing with cosmic string theory or – horrors – weather prediction.  This is very physical and, usually, something that’s a great idea will make sense to me.  One example.  I’ve read on many sites that, when bolting something through a cored deck, one ought to give the hole special treatment.  This involves digging the core material out around the hole, creating a void between the top and bottom fiberglass skins.  Then one tapes the bottom and fills the hole with epoxy (nice and runny) so that it will soak into the core material and get the fiberglass skins nice and wet.  Then one pokes a hole in the tape and reclaims the epoxy, which gets a filler added called colloidal silica.  This makes it very hard and durable.  The mixed epoxy/filler goes back into the hole from the top (don’t forget fresh tape to cover the hole that was poked in the old tape) and is allowed to cure.  When this hole is redrilled, it leaves a plug of filler epoxy.  That way any water that sneaks in around the bolt – it can’t get to the core!  Shazam!

We drilled out, reamed out, and filled the old propane bolt holes, the old propane hose hole, the hole I made for the extra solar panel connector, and all of the mast step holes.  When we filled the holes, some of them took so much epoxy that we were shocked.  That means that the epoxy was running through the core material, filling up holes and voids, and hopefully saturating any bad wood. 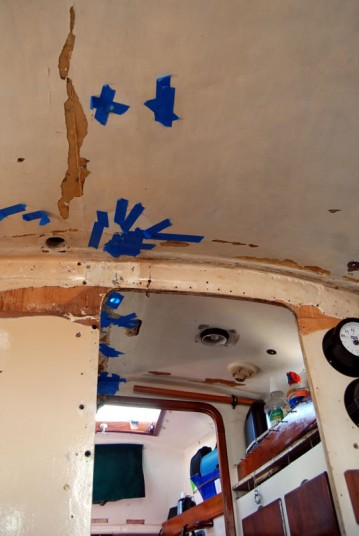 See the places that are yellow, where I pulled the paint off?  Having the mast off the boat has made the whole thing flex some – back into its original configuration, we hope.  Those places, the epoxy coat under the paint cracked with the flexing and I scraped the loose bits off.  Strange part – some of the thickened epoxy seeped from those spots – must have been weak, eh?

Another thing that came to light as the cabin top flexed – it seems that someone recored a portion of the cabin top.  I believe this photo shows the edges of a repair that was done with the mast in place, meaning that the cabin top was flexed down.  When we pulled the mast, the repair kept its flexed-down shape. 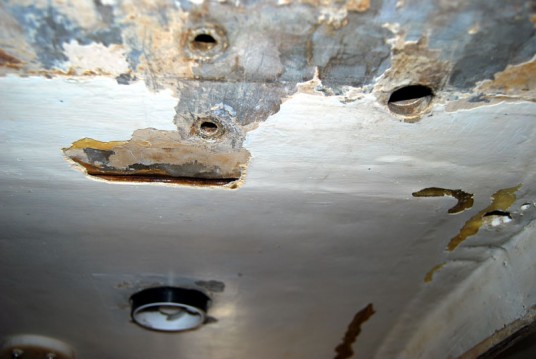 Great – way to repair the boat, previous owner!  Except…this boat spent a long time in Florida, where (I hear) it gets hot.  Heat makes epoxy cure faster.  Some people try to extend the working time (pot time) of epoxy by mixing less hardener into the resin.  I do believe that this was a weakness of the previous owner, because the areas that have been exposed by this flexing?  All sticky.  Like they NEVER FULLY CURED.  Not in all the years since the epoxy was mixed.  This is not cool; I am not copacetic.

Another aspect of the cabin top flex – all our doors are closing better now.  Including the companionway.  I’ve known that the companionway was the next big project, but the de-flex has turned it into a smaller project than I’d anticipated.  Rather than having to take it all apart and do a complete rebuild, we can repair the crack that developed over the last few months.  Yay!

So here’s the crack after I ground down the surrounding fiberglass and filler, and pulled out the loose filler in the thick spots. 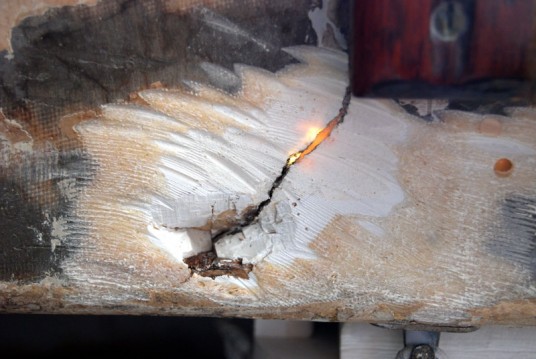 Oooooh – so that’s why it’s been leaking?  Yup.

This got a good sanding and then James mixed up a batch of structural filler, which stinks like sin but works like the heavenly host.  Or vice versa. 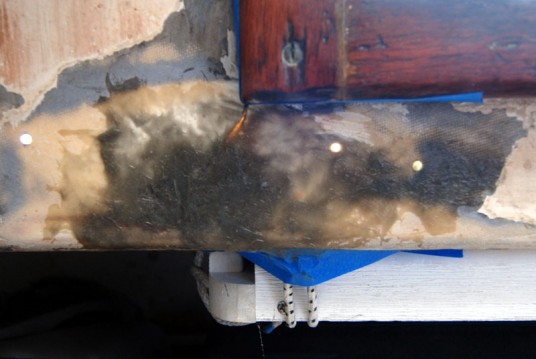 This part is practically done!  Except that sanding that shit is hard.  Oh well.  At least it’s not leaking.

And now for the big-badness.  The fugly part.  The scary bulkhead.

We realized that this bulkhead was scary a little while back.  It’s not hard to figure out.  It flies its scary-flag high and proud. 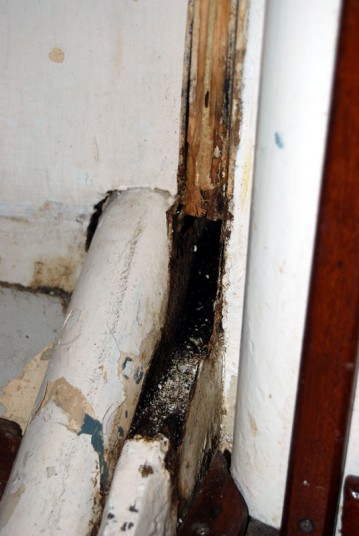 This weirdness is the other reason we knew we’d have the mast off for a while.  The bulkhead isn’t under pressure with the mast down, so it’s the right time to figure out how extensive this badness is.  To give you an idea of the information we started with, the empty dark space under the not-so-good-looking plywood?  That gets really soaked with water.  Like, glisteny.  And it’s really soft.

So it was time to explore the scary bulkhead.  I deconstructed the cabinet face and two of the shelves inside in order to chisel out a section of fiberglass.  And this is what I got. 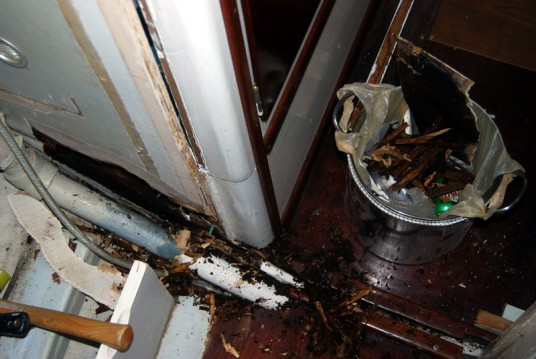 In the trash can (also the crab pot, were we to catch crabs), you can see the fiberglass I removed.  The odd shape that is dark with rot.  Yep.  Also in the can and in front of the can – the former plywood. 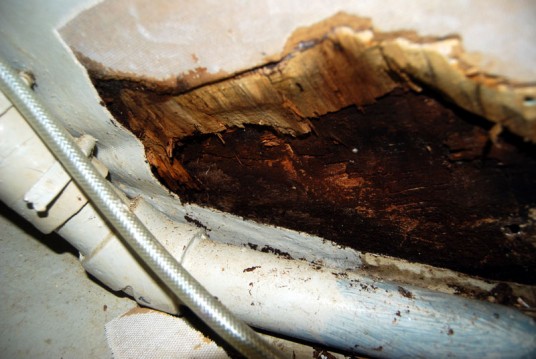 As an exploratory foray, this worked just fine.  It showed us that the bulkhead is rotten against the hull.  We don’t know how far the rot continues as the hull curves, but we’re figuring that it goes pretty far.  Also, we’re going to have to remove the plywood up quite a bit higher than I’d hoped – see how the middle of the plywood is more rotten than the outside?  I will be excavating a lot of this bulkhead.

And just to pound this home.  This is the wonderful soil that used to be plywood. 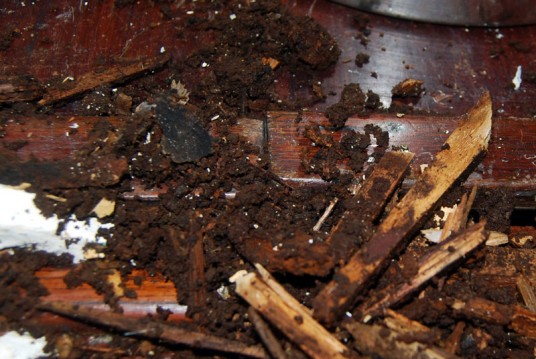 I didn’t hyperventilate.  Instead, I tore the head compartment apart.  I wanted to know what that side looked like.  Would we need to remove the entire bulkhead? 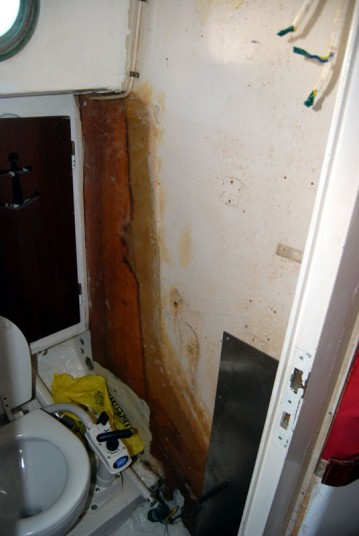 Nope.  The port side must have rotted a while back.  Someone already replaced the plywood on that side.  But check out the size and shape of the dark portions – that’s a pretty good sign of how much material I’ll have to replace on the rotten side.

In order to do the bulkhead repair, I’m going to have to cut the water fill.  It’s PVC, not hose, so I’ll cut and cap it, then use couplers to put it back together afterward.

I was raring to go, not really thinking about anything but getting this project done, when James slapped me in the face with a wet fish.

The wet fish has a name.

She’s called Ms Irene.  And she’s a hurricane coming up the East Coast bringing tropical storm winds and a storm surge that will flood every basement within a 1/4 mile of the waterfront.  Or not.  Either way, we’re not tearing anything else apart until she spanks us and passes on by.

Because guess what.  You don’t want a hurricane to hit when the boat looks like this: 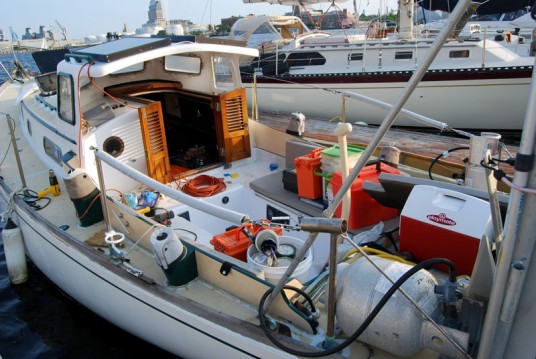