The repaired bulkhead is now clad in 1×3 tongue and groove oak boards.  There are some trim issues to be sussed out, and the fasteners need to be bunged, but it’s as solid as it gets.  Here’s the story. 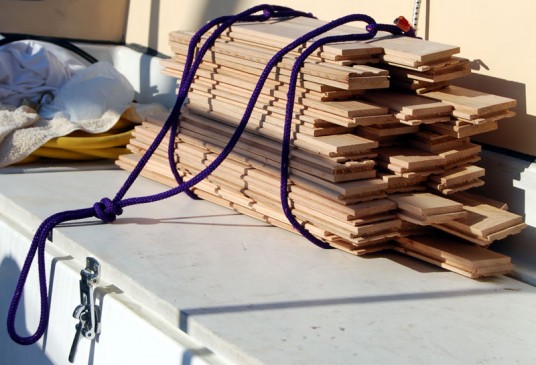 We bought two bundles of oak, which seemed likely (but not guaranteed) to be enough.  We won’t be able to do all the surfaces we’d planned with the wood we have, but we’ll give it a go.  I broke the bundles and rebundled them so I could carry the wood from the truck to the boat.  That shit is heavy!

My first job was to mock up the boards, trying to avoid putting board-ends near one another.  I taped across where my rows of fasteners would go, to give me a good visual. 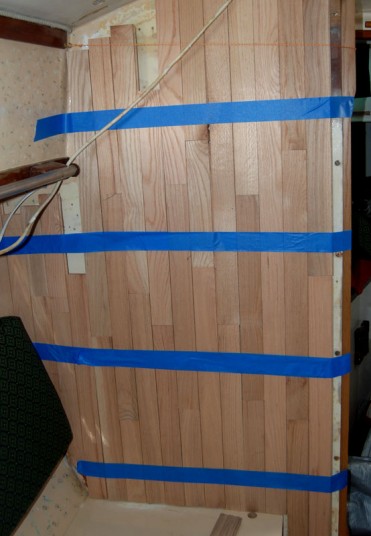 Another factor was allowing access to the mast compression system’s fasteners.  I had to make sure that they would be covered, but not by more than one board.  This was a good try, but partially covered a fastener. 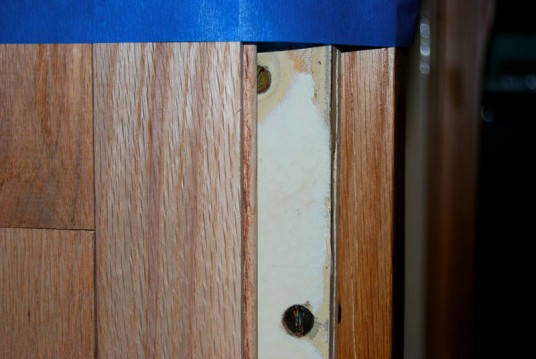 I changed things up a bit as I went, but mostly followed the plan.  When I took these boards down, I numbered them and arranged them on the cabin sole. 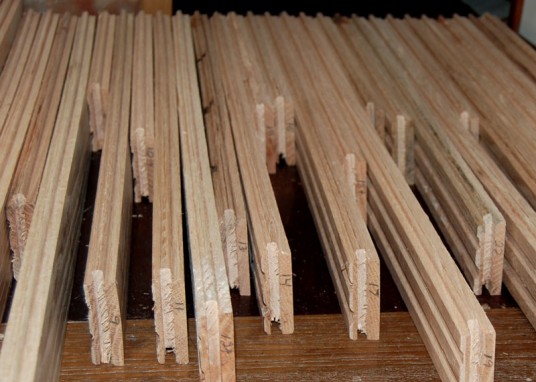 I couldn’t decide which picture I liked better, so you get to see both. 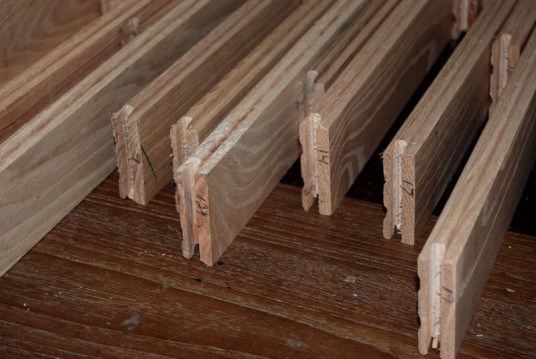 Then I started putting the boards up.  At first, I tried to gauge the proper angle using my smart phone’s spirit level.  That was a massive failure, as I was doing this during peak water-traffic time.  Every time I tried to figure out whether or not something was exactly vertical, another wake would toss the boat around.  I cut three pieces (incorrectly) before I gave up in frustration.

That meant I needed to work from my one and only guide line – the hatchway.  Working with tongue and groove boards, that meant that I’d reach a point where I couldn’t wedge more boards in.  The plan got tricky at that point, but first I did the clear field. 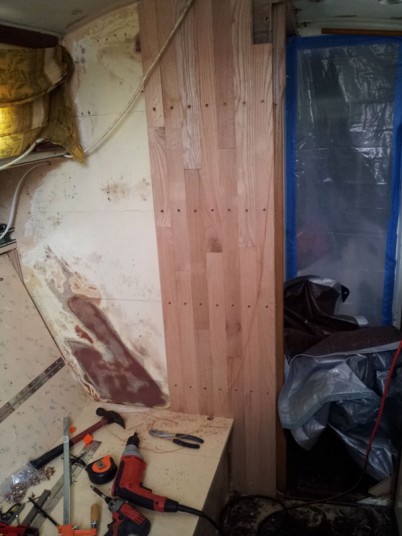 I pushed the boards into position and then clamped them against the ones I’d already installed.  That got rid of most of the gaps and resulted in a nice tight fit for all the boards.  I worked this way across until I got to the complicated bit where the deckhouse dives toward the deck.  I had to make my measurements and cut the next board.  I couldn’t try my board in place, though, without taking a couple of the boards next to it out of place.  I put the new board in place and then replaced the one next to it, screwing it in place.  If the screw holes in the board matched the screw holes in the bulkhead, I had cut the new board correctly and I could fasten it into place.  This took a few tries, and a very few boards took me an obscene amount of time.

This picture shows the bulkhead after I cut all the pieces.  I couldn’t put them all in place, but I wanted to see it as complete as possible. 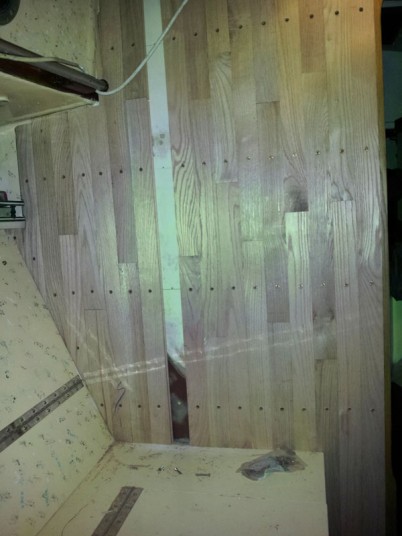 Sorry for the horrible lighting.

When I had all the pieces cut and temporarily fastened, I was ready to start the final installation.  That involved removing the boards a few at a time, working from the hull side inward.  I gooped them with polysulfide on the back, wedged them into place, and refastened them.  As I worked, I realized that I couldn’t clamp the boards as I had done working from the middle outward.  I had to shove the boards together as hard as I could in order to make the fastener holes line up.

I got smart and pounded spacers between boards after a while.  I took only two rows down at a time and then pounded very short board-ends into the fastener line.  That gave me the spacing I needed, and the job picked up speed again.  Once I had all the boards in place across both sides, I made a batch of epoxy and removed the first fastener.  I injected a little epoxy into the hole and put the fastener back.  Next fastener.  I epoxied them one at a time until every board was glued and screwed properly. 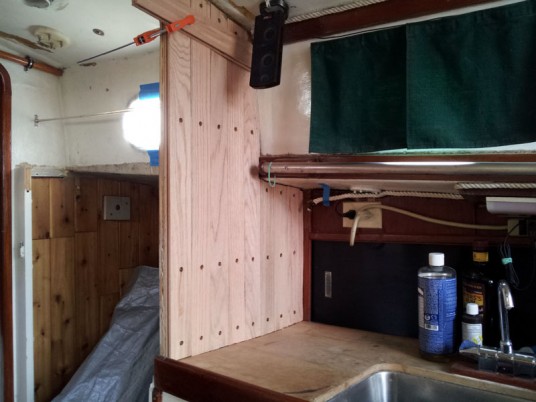 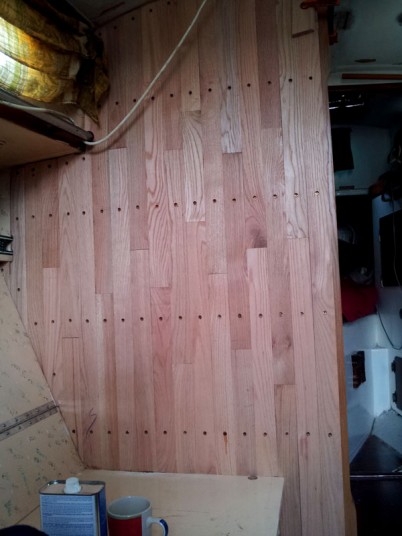 And then I moved on to the little pieces over the arch.  This has give me fits, trying to figure out how to add strength to this area while maintaining the aesthetic across the top.  James borrowed Raf’s belt sander and I turned these out. 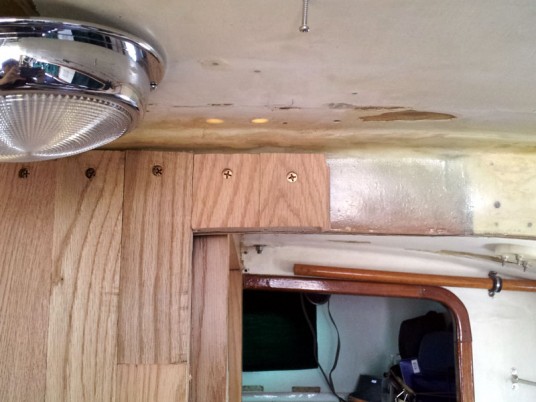 Shrug.  That’s what we get.

And then the trimming began.  Turning these long tongue and groove boards into trim boards – not the easiest thing I’ve ever done.  I cut the tongue off with the jigsaw, used the new flat edge as a guide for the router and rounded the edge, then cut the to the width I needed.  I spent that whole project wishing for a table saw. 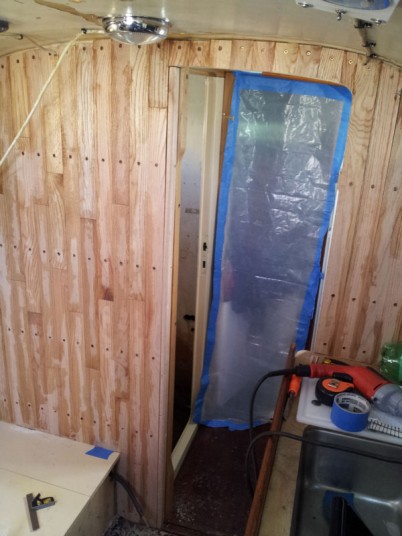 That picture shows one trim piece in place, though it’s hard to see because it fades into the rest.  The wall looks striped because I used sanding dust to make up a filler that I forced into the seams, smoothing them and hopefully making them invisible-ish.

This really feels like the project that will never end, but I’ll just keep on trucking.