My reading was Wednesday night.  I’m only now writing about this because yesterday was a complicated bummer and I want to get across my real experience of that evening, without the later baggage.

We were considering whether to take a ferry over to Midtown and walk to a subway station or take trains the whole way.  That was an easy decision once we got a gander of the space shuttle Atlantis being barged up the Hudson to the Intrepid Museum.  Ferry, definitely. 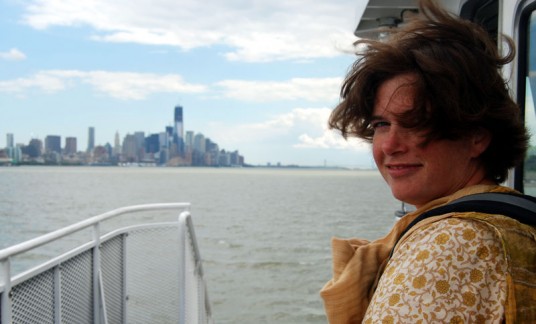 The ferry got us pretty close, but we walked on over to see the last retired remnant of that step in the right direction.  Reusable vehicles that can land under their own control – awesome.  If only they could escape without the rocket.  Well, that will come…or we won’t have a viable space future.  I can’t bring myself to believe that’s a possibility. 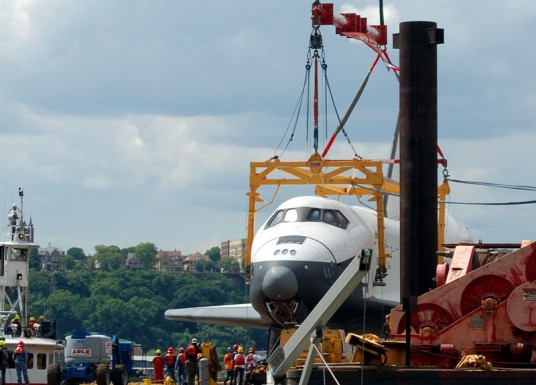 Falafel was the name of the game.

James promised me that you couldn’t turn around without some street vendor handing you a falafel sandwich.  Pita bread, lettuce, tomato, white sauce, and hot sauce, all lovingly wrapped around the best treatment of chick peas I’ve ever experienced.

Midtown was a bust, on that level.  We got to the train station without any sign of food other than hot dogs.  The foot traffic flowed and we picked up the rhythm immediately, absorbing energy down 8th Ave.  A brief subway journey later, we were on the Lower East Side and, what do you know, there was falafel on the very corner on which we exited the Delancey Street train station.

And it was good.

We ate the falafel standing right next to the food cart.  It disappeared so quickly that, within moments of the last swallow, we started talking about getting another one before heading back that night.

We made our way over to Babeland and the workers there are cool as shit.  As is par for the Babeland course.  Made no purchases, but checked out the stock.

And that concluded all our plans for the time before the reading.

While Dena was freaking (the fuck) out with the pre-performance jitters, I (James) was very happy to be the cool one for a change. Her color had increased in intensity to a rugged pink and she had a charge for a cup of chai that wouldn’t let up. We checked in at Bluestockings then went up the street to a perfect little coffee shop to sip some chai and watch the people packed sidewalks of the Lower East Side of New York City.

I felt incredible! As Dena sat next to me and read her story, Modest Mouse played on the cafe’s sound system and the beautiful people flowed by like a noisy stream at the end of a sensual tide.

The whole time I (Dena) waited for 6:30 to arrive, the chai did its work.  My stomach was tight and I was worried about exhausting myself with the excitement of it all.  The warm milk eased my belly and the light caffeine buoyed my energy.

The woman working the counter was gorgeous and had a slight accent.   The shop was, I think, Swedish, but that’s not what I heard in her voice.  (James informs me that she was from Ecuador.  He asked her outside while smoking.)  We spoke about the reading and she asked about my piece.  I felt so at home when she blinked but did not flinch at the answer.  “It’s scifi dyke erotica about airlock sex.”

The music rolled on through songs we love, or at least song with which we are bone-deep familiar.  That settled me too.

When the worker turned a customer away because she was closed, James and I jumped up and gathered our things.  In a profusion of thanks and well wishes, we three beamed each other into the evening with good will.  We returned to Bluestockings.

The nervousness was coming in waves now.  I would successfully distract myself or achieve some calm, but a sudden reminder or loss of attention allowed it back.

When D.L. King (The Harder She Comes) and Sacchi Green (Girl Fever, my book) arrived, I discovered that other writers had arrived as well.  We gathered around a table and made chat.  I kept expecting some sign of organizational effort, but it was all interpersonal conversation for quite some time.  The internal expectation that I should maintain some sort of professional demeanor – I am, after all, a paid author – melted into the understanding that I should maintain more of a shimmering, fascinating persona.  Right now, living the dream, I am pretty thoroughly mysterious to most, so it wasn’t too hard to describe my history and plans in a way that spun an idea of me.  An idea that often feels bigger than me, the person, but is born of my dreams and decisions and values and expectations.  Something with sizzle.

The bookstore morphed into a reading room – shelves shoved aside, chairs lined up tight, an audience that began drifting to those seats.  We writers took the first two rows and the editors got to the task of creating a reading order.

My jitters dried my mouth and I rose, sought out James.  He was in the back corner of the room, where he could get some photos of me while I read.  I retrieved my lip balm and got some water.  The moisture disappeared as quickly as I could sip it, but suddenly, the reading began.

Sinclair Sexsmith read a daddy/girl piece I’d seen on their website.  The next piece was, to my surprise, a bit of space-based camp about fueling an alien ship with sex energy.  As the other writers spoke, my attention was easily lost.  The distraction of my own upcoming moment made it hard to focus, especially on the stories that weren’t up my alley anyway.

And then I was being introduced.

Dena’s color had indeed intensified, her smile was peaceful and her demeanor welcomed her audience as she rose to her task. She was so beautiful and alive and all I could do was try to capture what I could see and feel with my pathetic medium, my camera. I was filled with every emotion almost for her and as I made my way around the room seeking the perfect shot she began her story. 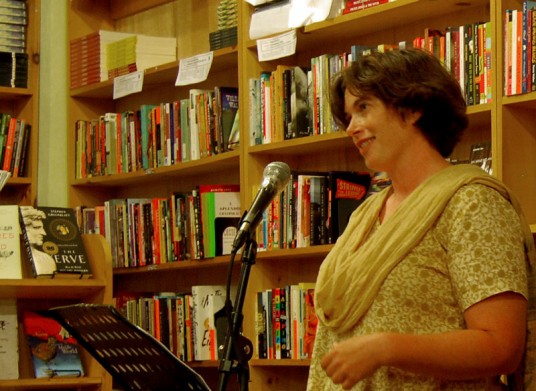 I (Dena) saw open eyes, raised heads.  Attentive, welcoming, interested people waited to discover what I had wrought in my imagination.  The words were fun, but I felt drawn to perform for those people.  I wanted to give them the whole story, not just the words on the page.  They could have that for themselves from the book.

The podium was at the perfect height and the microphone, once tilted, was too.  I didn’t have to think about those thing, just talk story.  Just tell it the way I would if it were 2004 and Toys in Babeland’s crew was gathered around to hear about my weekend adventures.

I spoke to all of them, one by one and collectively.  I gestured to show how the straps went and shrugged where the character’s voice did.  In part because the others had done such straight, paper-focused read-out-loud versions of their stories, I succeeded in capturing the audience.  They smiled where I wanted them to, looked uncertain when I wanted, and shifted in their seats when the sex got heavy.

I got applause, as did we all.  I got “good job”s, and wows, and other comments.  And at the end, I signed two whole books.  My anthology wasn’t available in the store yet, so I signed one author’s copy and then a copy of the other book that was being featured. 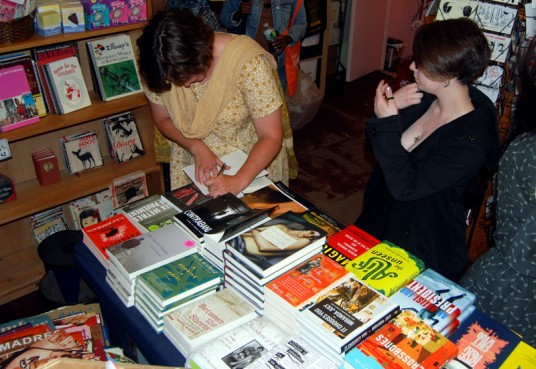 And it was over.

Energy flowed and James suggested food.  The street vendor was out of falafel, but we made do with crappy NY pizza to top off the experience.  After the subway ride back to Midtown, we found a falafel place we’d missed the first time and got one anyway.  We caught the last ferry back to Jersey and settled slowly from the excitement.

I’m glad I did it.  I now know that I can perform my stories and hold the interest of an audience.  I hope I get to scale up that experience and do large events as author of a scifi novel.  That sure does sound like fun.