Dena jumped over me at 0445 and that’s weird. No, I mean she was up before me at 4:45 in the morning and that’s weird, or rather not the norm, but that just shows you how motivated we were to get the hell out of Hamburg Cove. Don’t get me wrong, it was a breath taking environment, a beautiful sheltered cove and the best ball-shagging we’ve ever done but after an entire weekend and a rainy Monday in the place, we were both freaking out to get underway.

When we clipped onto Miss Sue’s mooring Friday morning there were maybe 15 boats in the cove which is about a 1/4 of a mile circle. We thought we were in the perfect situation for a couple of folks like us that just wanted to kick back and let a busy summer weekend on the water go by.

The odd seagull circled, but we were entranced by the bald eagles, cormorants, and osprey.  There was also a small diving bird, so cool in its fast banking and sudden dives.  All the birds were hunting successfully, but the fish jumped right out of the water all around the cove.  One cormorant caught a catfish so big that it had to carry it around the cover in circles, tearing it to pieces as it went. 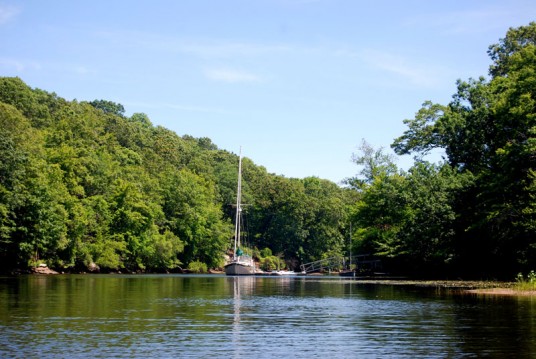 Oh, how sweet and cool the water was!  There was a biological life to it, no doubt, but it was fresh and we needed that pretty badly.

A lovely calm lay on the water and, refreshed from a swim, we got in Tinker and rowed up the river, seeking the truth of the rumored old-fashioned general store. 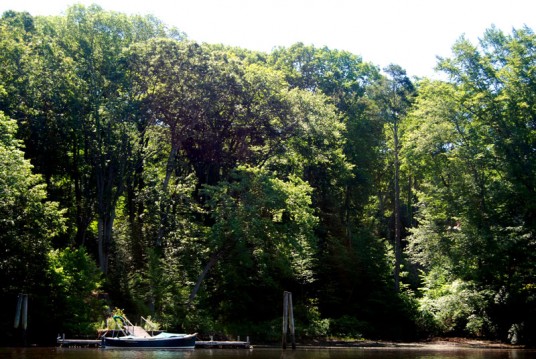 I (Dena) caught sight of a stone building behind a small dock and watched it appear as we started around a bend.  It resolved itself into the only land-dwelling I could imagine inhabiting.  A two-story (living above, workshop below) old fieldstone boat shed with a second floor balcony.  I imagined setting up there for the winter and tearing into all the projects that require space or make the boat hard to live in. 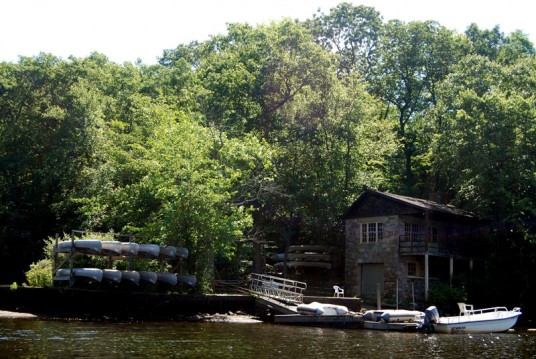 We knew that the marina specialized in restoring wooden boats, but we didn’t know they did such beautiful work.  As soon as we approached the dock, we were treated to this lovely transom. 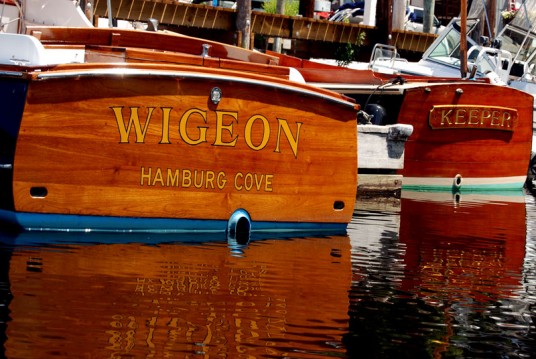 Thought most of the boats there were in Bristol Epifanes condition, we love a hard luck case and, apparently, so do they. 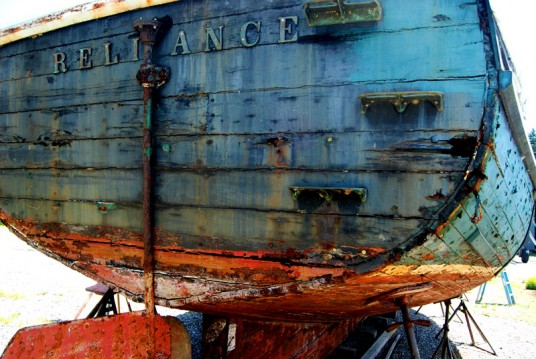 We’ve all seen pictures of perfect brightwork, but check out the ratlines on this wooden staysail schooner! 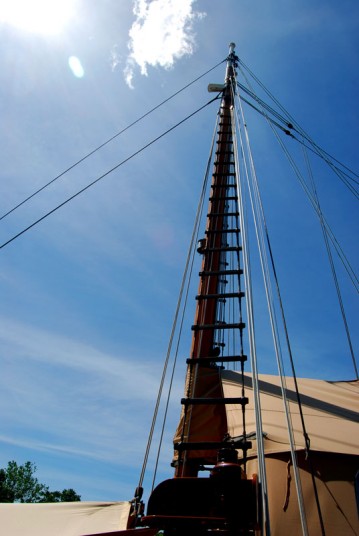 A short walk up a long driveway brought us to the main reason we came to this little town: H.L Reynolds, the rumored general store.  It proved to be fact, indeed, and just as old as we’d heard.  The woman who owns the store and works the counter, Jane, has been in that room since 1953. Her great-grandfather started the business back in 1850, as you can see on the sign. 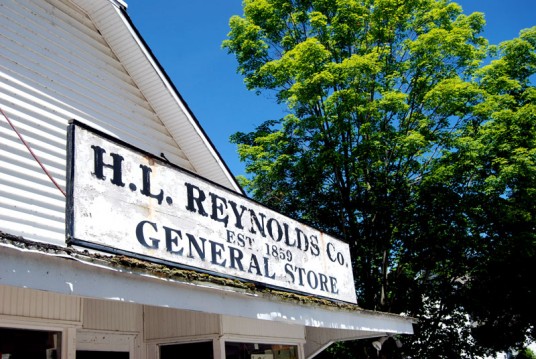 Back to the boat with our overpriced groceries, we were met with the following sight.

I (James) counted 163 boats by the time the sun went down.  Our lonely sheltered cove had just started to fill up.

So there’s this thing called rafting.  One boat ties up to a mooring and the other boats tie up to the first boat.  Or, to the outermost boat of however big a group they’ve amassed.  Ideally, you want to keep the boat that is tied to the mooring in the middle, but the high school environment of the yacht clubs encourage in-groups within cliques, leading people to tie up depending on which boat-folk they like better rather than creating a properly balanced mooring.  For example: 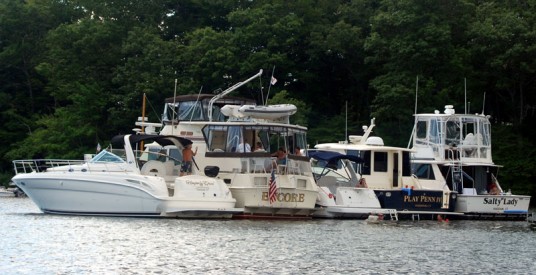 Play Penn, the blue boat, is the boat on the mooring, with three boats on one side and one boat on the other.  They were swinging in the breeze like a flat tire, tugging on that mooring directly in front of us.

That’s when our rum came out. 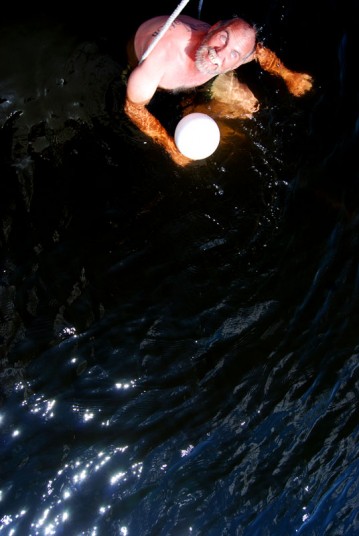 We’d maintained complete sobriety up to that point, in case Miss Sue came back and claimed her mooring from us.  That’s the protocol – take any mooring but don’t bitch if the “owner” kicks you off. (The “owner” being the person who pitched a tent on a public camp site, remember that?, but at least here in CT, we can use it if they’re not around.)

We had a nice, quiet evening, if you consider a muscle car rally at a 4th of July picnic at the local water park nice and/or quiet.  Everyone was having fun, the assholes were few, and a sailboat threaded through the mooring field, checking everyone out. 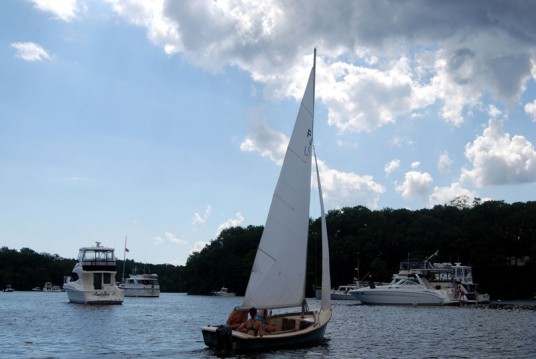 By noon on Sunday, there were well over 200 boats in the mooring field – so many we couldn’t even count them.  By seven that evening, there were twelve boats and an oily slick on the waters of our quiet little cove.

In the sky, a storm was brewing.

Our planned Monday departure was shelved.  We spent the day below as the lighting struck, dragging thunder close behind, and sheets of rain half-sunk Tinker.  Michael Chabon tickled my (Dena’s) funny bone with The Yiddish Policemen’s Union while James devoured Pynchon’s Inherent Vice.  We played dueling laughter from the salon and the v-berth, and there was not a jet ski in sight.

Back to jumping out of the berth this morning.

We caught the current ebbing downriver and shot out to the Long Island Sound in half the time it took us to get up. 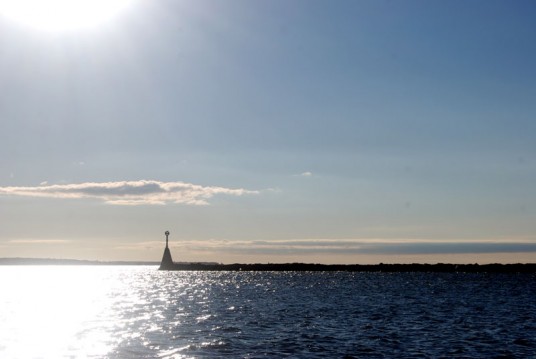 Past the shoal, we put up the main and beamed reached up the Sound.  Rather than our speed slacking off, we shot ahead.  We hammered down that second reef within five minutes of setting sail. 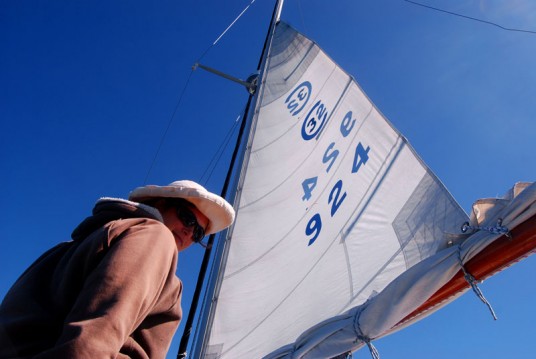 Still, we ranged between 5.7 and 7.1 knots over the ground all the way up to the Thames River a mere five hours later.

This river, like so many in the area, is watched by twin sentinels at the entrance. 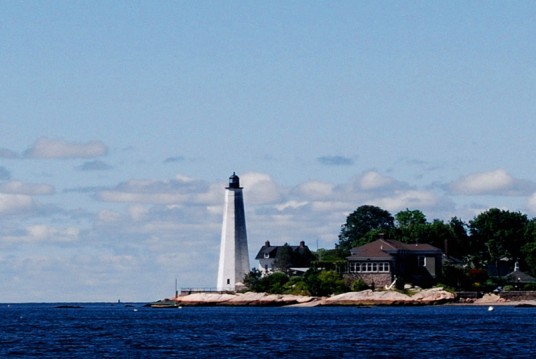 This, we learned today, is called a mansard roof. 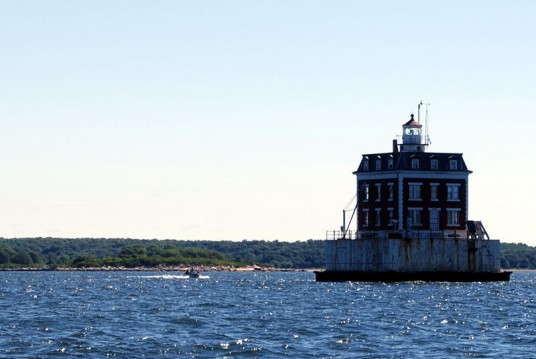 Fuel and water tanks filled at the first marina inside the river, we scooted up to the municipal moorings, not one of which was occupied.  We took our pick and, as we so often do, set off on an epic walk immediately.  Groceries, falafel sandwiches, and a toilet paper purchase later, we returned to our home on the Thames – pronounced thayms on this coast.