The last post ended with an epic walk for groceries and suchlike.  It was about 5 miles, not counting the up-and-down-the-aisles part.

Then we wanted to go to the USS Nautilus museum – it’s all about submarines and the first nuclear sub is on display there.  Google maps gave me the helpful information that there was no public transit between New London and Groton.  I mapped it as a walking route…4.7 miles each way.

The best part about walking through strange towns (or even strange parts of familiar towns) is finding the unexpected.  This qualifies: 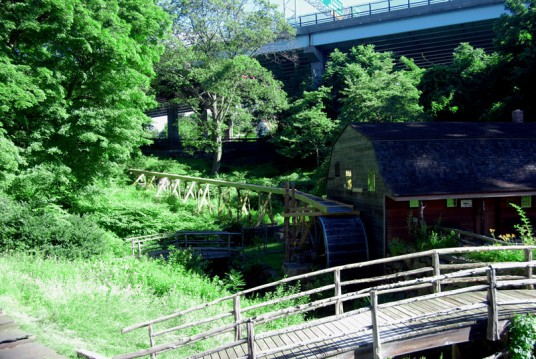 John Winthrop the Younger was the son of the founding governor of the Massachusetts Bay Colony and was himself a governor of Connecticut.  He build the mill above in 1650.  Pretty neat, eh?  Note the freeway bridge in the background. The mill is actually situated right in the middle of three such bridges arranged in a major convergence leading to the bridge over the Thames River.

Can you imagine the battle to save that mill?

When we showed up, a cop was hassling a very tidy homeless guy.  He had a pack and a gallon bottle of water on the picnic table and it looked like he had camped the night before.  This was before 9am, so the guy was trying to be subtle, I guess, packing up before most people would be around.  I wonder who bothered to call the cops on him.  He wasn’t hurting anyone or anything.

Anyway, we used the long, tall I-95 bridge across the Thames River and then the narrow road along the river to the museum.

What we saw: missiles, officers’ histories, sonar and radar histories.

What we didn’t see: the people and systems that make submarines possible.

I (James) grew up in Austin, TX, where I met a man who, at the time, was teaching physics at the University of Texas.  His name was Saul Sternberg.  He was on the original designing team of the USS Nautilus.  At the age of 19, Saul designed and built a valve system that would ultimately be applied to every working nuclear submarine in the Navy.  And that was the main reason why I was motivated to walk 10 miles to a military installation.

When I met Saul, he’d been retired from active duty for 15 years.  He told me that the most coveted secrets that the Navy had at the time were the silent propulsion systems that drove the submarines of the cold war.  He also told me that although all of those systems would be officially declassified by the year 2000, they would never reveal to the world the people that made those systems happen.

As Dena stated above, we saw weapon systems, decorated submariners, and control consoles of almost every system aboard a working submarine.  When we toured the USS Nautilus, the tour ended at a sealed hatch that lead to the reactor bay.  We were conspicuously kept out of the bridge as well. The engines, generators, and propulsion systems are aft of the reactor, which of course is behind the sealed hatch, where lies the history of all the great scientists who never held a gun but made it possible for over a half century of nuclear power at sea.

Saul was not only my friend but after my biological father abandoned his family he unofficially adopted me and I called him dad until he committed suicide in 1993 at the age of 64, less then a year after he was diagnosed with Alzheimer Disease.

And, he was right.

The mill built by Winthrop, the homeless man, my dad, all essential parts of what make this country work, and all of them forgotten or locked away.