The last few days have been great sailing.  From New London to Mystic, to Point Judith Harbor of Refuge, to Dutch Harbor in the Narragansett Bay, we’ve sailed mostly on a broad reach, waves with us, and wind in the 10-15 knot range.  Enough to keep us moving at a good clip but not enough to worry us, though we reefed and unreefed quite a bit to maintain our comfort level. 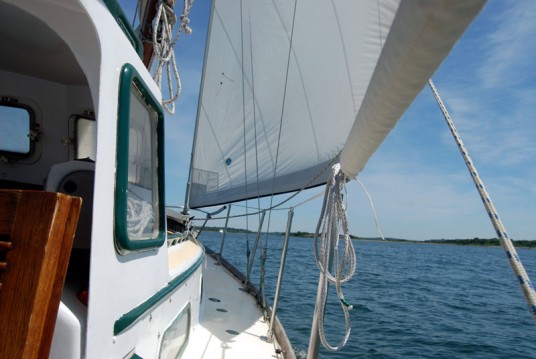 We started in Baltimore on May 31st and sailed from Maryland into Delaware, New Jersey, New York, Connecticut, and reached Rhode Island on June 29th.  This kind of thing is only possible on the East Coast.  To hit 6 states on the West Coast, you have to add states of other countries – BC, WA, OR, CA, Baja, and Hawaii.  And doing that in a month?  No way.

July looks to be the month that we do RI, Massachusetts, New Hampshire, and Maine, with a possible stop in Nova Scotia.

In Mystic, we ran into more of the same moorage troubles.  The waterfront association sets aside some area for anchoring, but that area seems to be getting smaller.  It used to encompass about 100 yards square of 7-9 foot depths, but that is true no longer.  The anchorage markers delineate an area with 3 foot depth, which is not enough for our boat at 4’9″ of draft.

James and I clucked over the chartplotter and decided to try anchoring between the channel and some boats on moorings.  When we sat back on the anchor rode, we were in the channel and too close to another boat.  Pulling the anchor up revealed that we had hooked onto a massive derelict mooring chain, the buoy for which had long since broken away.  The chain weighed hundreds of pounds and I (James) had to work it off the point of our CQR anchor.  A back-breaking science project that took about 20 minutes.  It’s our first experience of fouling an anchor and it added to the already frustrating New England anchoring experience.

We settled just outside the channel on the other side of the small anchoring field in barely enough water.  I mean, depth alarms going off at the bottom of the tide.  We were floating and it was only going up from there, so we set a stern anchor to limit our swing.  I (Dena) rowed the Fortress out on 70′ of line and created a tripping hazard for anyone foolhardy enough to try zooming between us and the marker for the public anchorage.

We sailed our Dyer Dhow from the narrow hole we anchored in to the city dinghy dock.  On the way, we had to pass under a railroad bridge that was closed.  Rather than wait the 13 minutes for the train to pass and the bridge to reopen, James unshipped the mast rig and rowed under.  We laughed conspiratorially at all the boats circling in wait.  The trip downwind was fast and we tied up and set off in good, James’n’Dena fashion on a long walk. 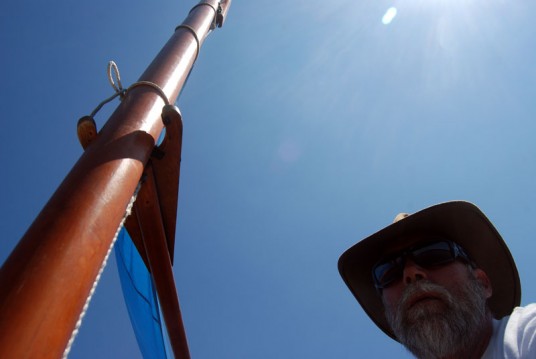 Though we couldn’t see fit to spend $50 on entrance to the Mystic Seaport Village, we got to see most of the boats headed there for the 20th Mystic Wooden Boat Show.  A couple exquisite lapstrake dories were being launched as we walked by. 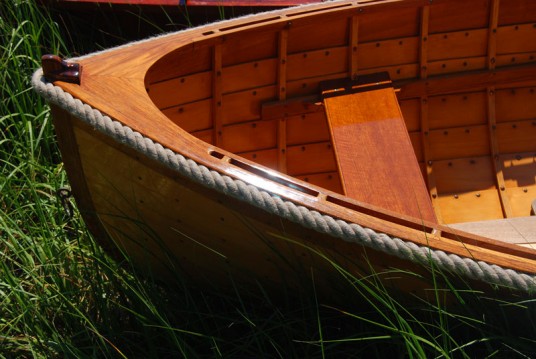 The 6-mile walk is unworthy of more comment than that.

We sailed back to our boat upwind, James at the helm, in a trip that took at least 8 times longer than the downwind run into town.  But hey, we were sailing.  So were some other people. 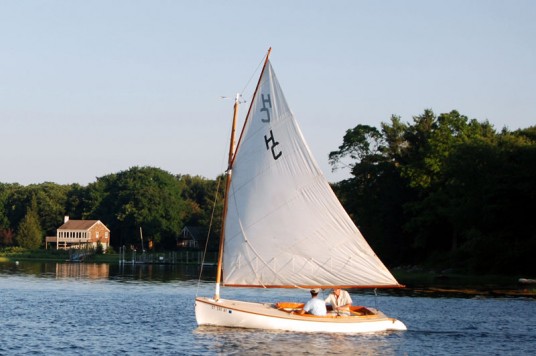 The next day, we sailed out Fisher Island Sound, around Watch Hill, and over to Point Judith.  A very straightforward trip once the shoals and rocks around Watch Hill had been navigated.  The sailing was beautiful and the hook was set by 2:30.

The Harbor of Refuge is created by 3 breakwaters, one of which is V shaped and on the side exposed to the Atlantic Ocean.  One side of the V is heavily shoaled inside and the other side has been torn down over approximately 40% of its length.  Much less refuge than we’d expected.  The roll we got off the ocean tossed us back and forth over an arc of 20 degrees for most of the night, but especially at high tide.  I (James) didn’t sleep much, so I grabbed my camera and headed above decks for this shot. 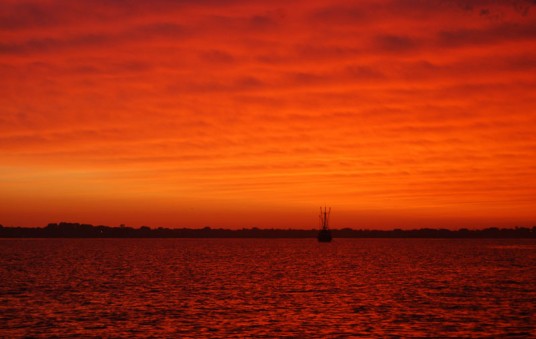 A straight sail up the Rhode Island Sound got us to Dutch Harbor. 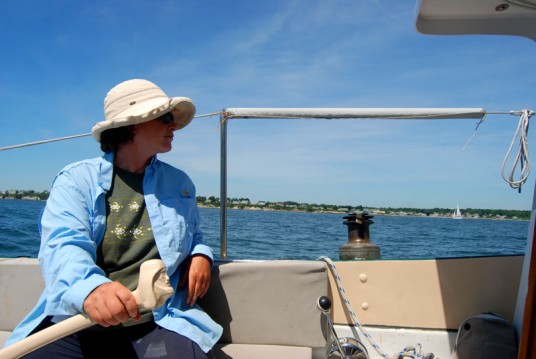 We motored around considering the wealth of riches which consisted of four separate possible anchoring spots, one of which is more or less the whole bay.  We’re not in Connecticut anymore!

Choosing a spot with good holding was not a problem.  We did the math on wind + roll + tidal current and got a sum of anchoring in the southeastern bight of Dutch Harbor in 13 feet of water.

Several relaxing hours later, I (James) was out on the deck listening to live music from across the bay, when I realized I really needed to get this shot. 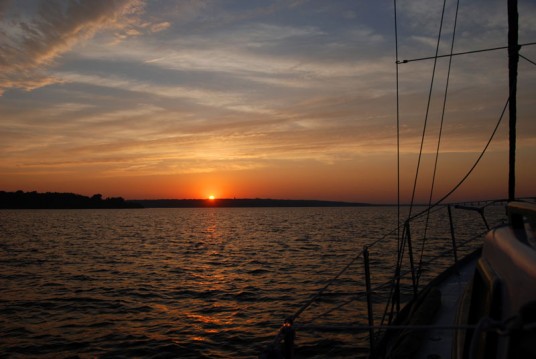