The ice began its rapid melting process last Monday night and we were in the basement wood shop putting a new coat of paint on the Rutland 913 wind generator. We have discovered that even though our employment is not necessarily physically hard work, it is taxing none-the-less and riding to the boat on Monday night after work is just a little much. So we continued working on the projects that we have going here at the community.

I found a new (to me) bike on Craigslist for a couple of hundred bucks, a steal really, borrowed a car and went out to the middle of bum-fuck Rhode Island last Thursday to pick it up. I was stoked to put the new ride to the test on the muddy ice-melt through the Bluff Point State Park and Tuesday morning we made that happen. It was a blast! Dena rode my old bike, which we originally bought for her anyway, and had no problems riding through the goo.

My new bike, a 2010 Trek Wahoo with a single speed gear set-up, is pretty much built for me and it rides like a dream. It is a bit harder to deal with being as though I can’t rely on the 21 speed gear package my old bike pampered me with but I got used to it quickly and had a great time muddying it up on my first time out. By the time we got to the boat we were both covered in muck and laughing our asses off.

We got right to work…

As soon as I stepped on the boat I noticed that the batteries were completely dead! There wasn’t even enough power in the house bank to run the power meter. By the time Dena had stepped aboard I was running through all the system checks to try to figure out what had gone wrong. Ultimately, after much ado, we discovered that the charge controller for the solar panels had burned itself out (cheap piece of west marine shit) and reversed the charge thus sucking all the power out of our 8-D house battery. Luckily we have another battery, a five year old (soon to be replaced) starter battery for the engine.

So we decided to run the engine while we worked on the first step in the reconstruction of our home. For two hours we ran the diesel and that big-ass battery sucked up as much power as we could dish out of our 60 amp alternator. It went from 40 amps all the way down to 28 amps before we shut the engine down. It didn’t fill that big ol’ battery up by any stretch of the imagination but it gave us enough power to get the lights back on. We do have a small 110volt 2 amp battery maintainer that we hooked up and the charge controller for the wind generator also has a PV setting so we hooked the solar panels up to that and the system worked just fine. 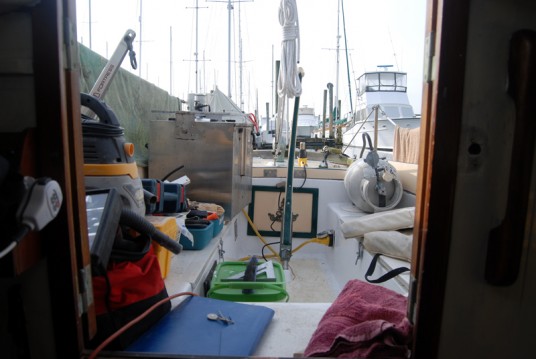 While we were running the engine we took the stove and all the tools out of the cabin and moved them out into the cockpit.

Our favorite thing to do!

Then we pulled apart all the work we did last week (our second favorite thing to do) so we could cut out the underneath supports for the new cabinetry foundation. 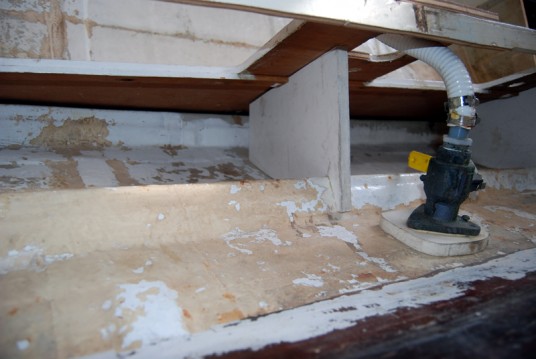 After making two underneath-supports out of PVC plywood we attached them both to the underside of the newly trimmed-back foundation with 3, 3 inch stainless steel fasteners each. I went to work grinding down the old hull finish in preparation for the new fiberglass while Dena cut back the aft bulkhead to match the new lines and sanded the paint off the foundation top. By that time we had shut the engine down so then we did our third favorite thing in the world, we fiberglassed the foundation to the hull. 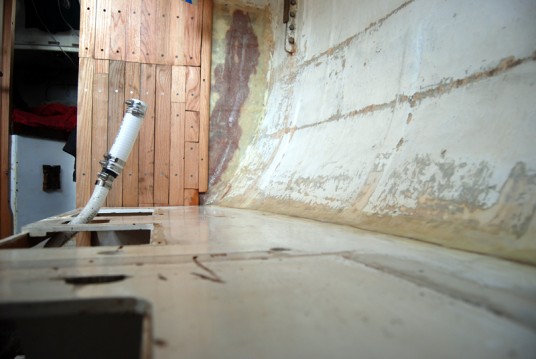 We filled the gap between the hull and the wood with loose-mat fiberglass and poured on 10 batches of epoxy. After that we laid in a 3 inch strip of glass tape and gooped another 10 batches of epoxy on top of that. Then we fit the lower supports in place and epoxied them with West Systems 610 (Wonder-Goop) and let me tell you, that fucker is bullet proof! 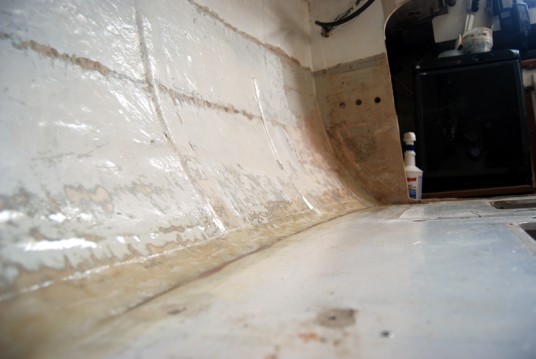 After the construction was done we put the stove and all the tools on the foundation as a realistic load and went hunting for some food while the epoxy dried.

We woofed a glorious meal, came back to the boat, opened the bottle of scotch and toasted a job truly well done.

The next day we filled the bolt-holes from the old windvane in the aft deck with epoxy and 610 and decided to be lazy and call it a short day.

We packed up our stuff in the back-packs and Dena went up to the head one last time before we took off. As I was walking away from the boat something caught my eye just below the surface of the water.  It looked like a bike tire… I stopped cold, looking down into the water and got chills running all the way up my spine!

For some reason it was an extraordinarily low tide and the sun was at just the perfect angle, allowing me to see all the way to the bottom underneath the boat… and there it was, Dena’s “stolen” bike sitting on its handlebars with its tires pointing straight up at me! Picking my jaw up off the dock I turned and saw Dena coming down the gangplank and all I could do was yell to her “Dena, you have to come see this!”

We both just stood there and laughed.

I grabbed the boat-hook off the deck of the boat, hooked the front wheel of her bike and pulled it to the surface.

The bike was in surprisingly good condition. We got it up on the dock after sloshing off some thick mud from the handlebars, set it upright and emptied out all the sea water onto the dock along with a very disgruntled little fish that Dena helped safely back into the cold, cold waters of the Fishers Island Sound.

After the bike drained out a bit we grabbed a couple of towels from the boat and wiped it down. 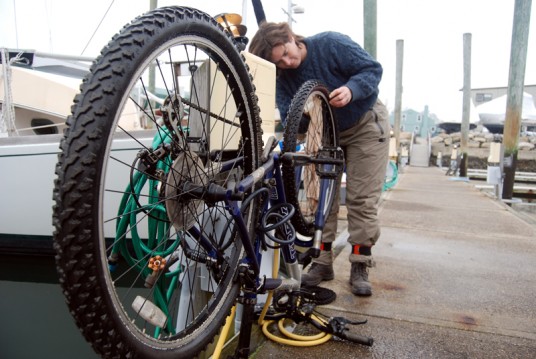 We got as many of the little, start-up barnacles off as we could being as though there isn’t any running water on the docks during the winter season and came to the conclusion that if we were going to save the bike from certain corrosive death she was going to have to ride it back to the community and clean it up there… So she did! Five miles through the sludge and the snow on a bike that had been under the sea for two whole weeks. When she got back home, without missing a beat, she systematically took that bike apart and scrubbed every last barnacle and anemone off of every single spoke, crank, and pedal. 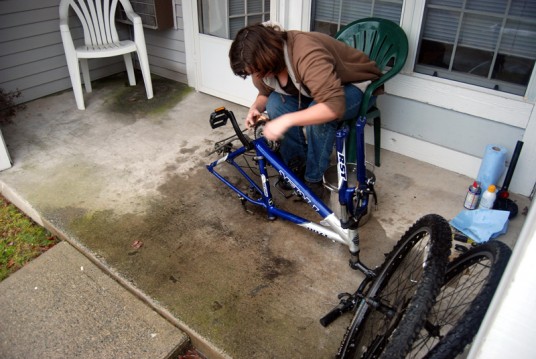 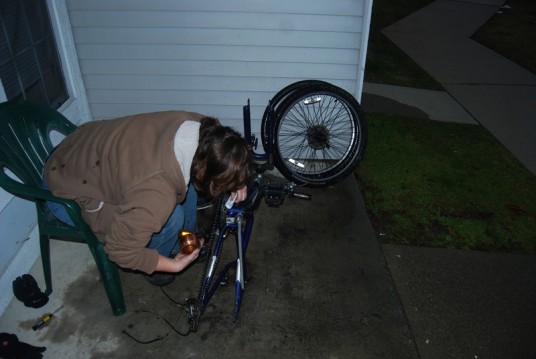 …And it has been. I’m sitting here writing this post looking at this bike right next to me in our living room and the thing looks practically brand new and I’m still just blown away by the way the story of our life together unfolds.

Just another lazy weekend on the boat, right?