This week we didn’t get to do a whole lot of work on the boat, I mean we worked, as you shall see but we did more riding our bikes through the insistent  snow than actual work on the boat.

Back at the community we loaded up the bike-trailer with all the pieces of Azek that we cut to form on Monday night. Then we rode. Just after the crack of dawn we rode from Groton to Noank on a thick carpet of freshly dropped frozen precipitation and unloaded the trailer at the marina about 45 minutes later. We had about an hour before Dena’s eye exam so we thought we’d put the new dry-goods shelf in place and do the fiberglass so it could dry while we were gone. 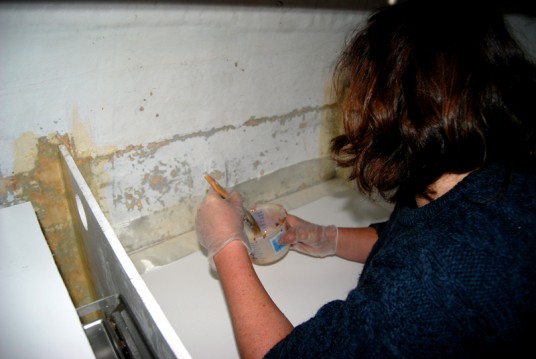 Then we rode to Mystic through the gently sloping Connecticut rivers edge. It snowed on us constantly the entire ride but it didn’t seem to matter much, the scenery was spectacular. When we got to Mystic Dena headed over to her eye-exam while I settled in at Bartleby’s for a relaxing day of reading and sipping coffee imported from the Mexican mountains. All the while it snowed, a light late winter feathering that covered the already picturesque town of Mystic painting a perfect postcard.

…And it was all day.

I (James) am reading a most fascinating book, Cryptonomicon by Neil Stephenson. It’s about all the things that Neil Stephenson writes about, computer culture, codes and breaking them and the thing that I think stimulates him as a writer more than anything else, the concept of a Universal Machine. Cryptonomicon is a 918 page future door stop that helped me pass the time quite nicely, so, by the time Dena showed up just after dark my feet had thawed, my mind was stimulated, my ass was asleep and I was more than ready for the 6 mile ride back to the boat. 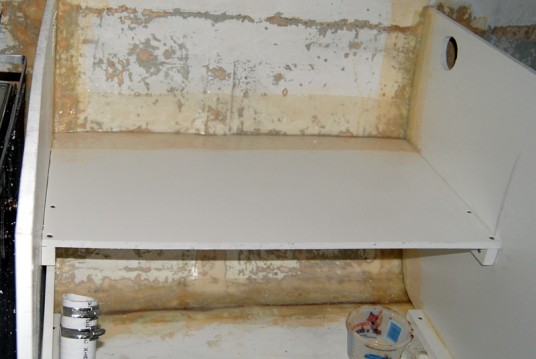 Sure enough, after the 12 miles to and from Mystic and my day of reading bliss it was nice to come home to a dry project that wasn’t fuming us out with the foul stench of off-gassing epoxy.

…And yet, we still couldn’t sleep. We both tossed and turned and took turns cozening up to the brutally cold hull all night long. In the morning we told each other stories of lucid-dreaming through out the night. I just couldn’t figure it out after all that riding you’d think we’d sleep like rocks but we got up as early as we could and went and did “the thing” at Carson’s greasy-spoon as soon as humanely possible.

As we’ve mentioned many times before one of our favorite things to do is to go to a used marine hardware store, or a chandler as they were known in days gone by, and sift though the bins of od’s-n-in’s for hours at a time looking for that unique little piece of gear that you just can’t find at your modern marine box-store. Well the closest one to us is in Mystic, of course, and they are not open on Monday’s and Tuesday’s.

If they had been open yesterday I wouldn’t have gotten to kick my feet up and sift my way through the brain of N. Stephenson so I wasn’t sweating the second bike  ride to Mystic in a week. The morning sun was shining and the melt from yesterdays snow was spraying off our tires covering us and our bikes with a thick salty coat of road grime that only helped to make us look that much more hard-fucking-core. By the time we got to the Mystic Marine Consignment store we looked as if we’d ridden from Baltimore just that morning.

It’s never a good idea to go to a chandler with a shopping list because you never really know what their going to have or how many of anything they might just happen to have in stock but this time we did have that list. We were prepared to go to the shop-n-box if we had to but we wanted to give the chandler a try first. We pulled out the big plastic bins of hing hardware and emptied them out on the concrete floor trying to find hinges for the four new hatches we’d cut for the new galley. We sat down and went to work right there in the middle of the isle with the marine toilets on one side of us and pintles and gudgeons on the other. An hour later, much to our pleasant surprise, we had a pile of hardware with everything we needed for the new galley hatches as well as a new latching system for our engine compartment, bonus… Gotta love a New England chandler in the middle of winter!

After paying less than half of what we would have given west-fucking-marine for the same shit we packed the trailer up with all the booty and rode back to the boat to build our new, fancy-schmancy galley drawer before we ran out of light and days off.

The ride to Noank was cool, wet and lovely much like the ride to Mystic, only more down hills on the way back!

The first project upon our return was to finish the shelf we started the night before. 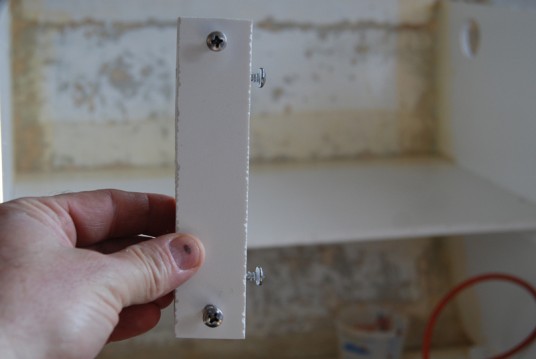 We pre-drilled the holes in the Azek fastener-blocks forward and aft  and sank the fasteners in like this. 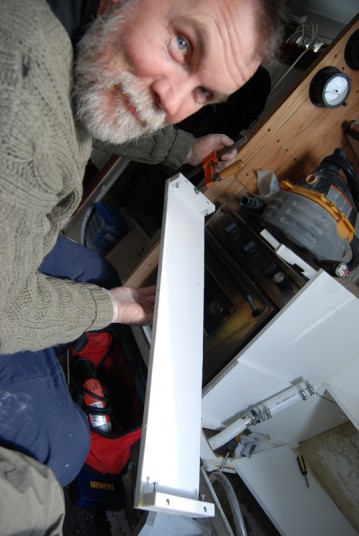 Then we gooped ’em up with West Systems 610 and attached them to the shelf face. We also ran a bead of 610 between the face and the shelf and pre-drilled for some fasteners under the face. 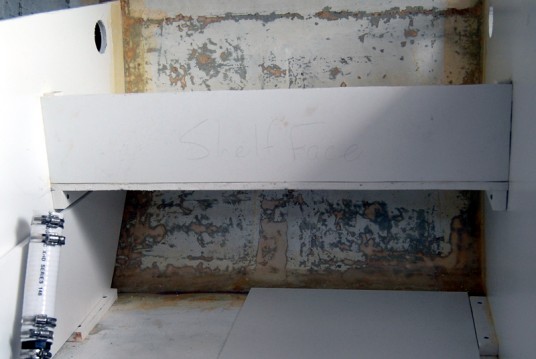 It’s amazing how stiff Azek gets when it’s gooped up with 610!

After that it was time to build the drawer.

Back at the community we cut the drawer pieces to conform with the curve of the hull and the angle is pretty dramatic giving us a 10.5 cm variance from top to bottom. After we made the cuts we marked out the channels that had to be routed with a pencil, put the pieces in the bike trailer and hopped I didn’t crash on the way to the boat.

Two years ago I tried to give Dena an Ipad for her birthday and she returned it the next day and got a Bosch bit-router instead, boy am I glad she did that!

She’s such a geek with that thing! 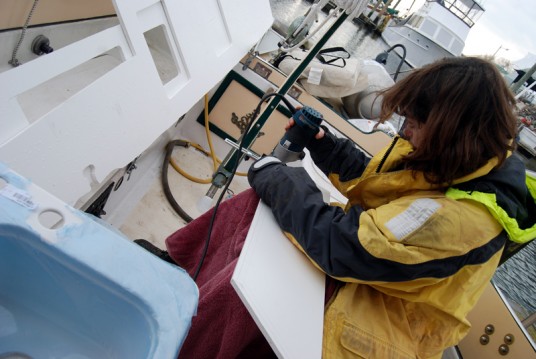 That’s one tool we just can’t use down below. It turns Azek into a fine sharp dust that gets into everything!

I know you’re probably thinking, what’s the matter with this guy, is he afraid he’ll break a nail or some-shit?! So while she was looking all sexy with her router I was cutting the angle in the back of the drawer getting it ready to slide into the channels. 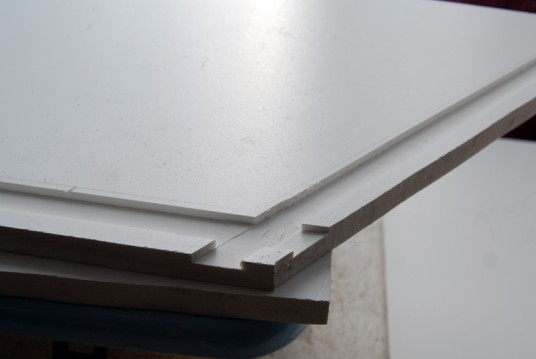 Her cuts were perfect! 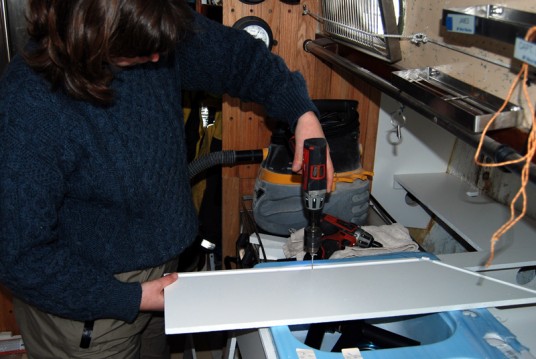 After the channels were routed she pre-drilled for the left handed fasteners and I did the right handed ones, right down the center of the channel. 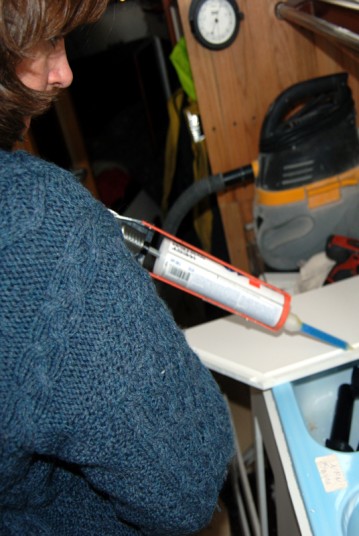 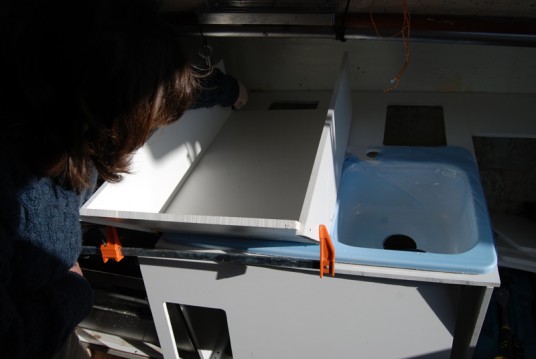 Then as the sun came out once again we clamped the whole thing together, screwed in the fasteners and smoothed out the wonder-goo.

Damn, it was perfect! We just stood there staring at it with our mouths in shocked agape for several long moments…

Then we had to break out the Scottish single malt, pore up a couple of healthy shots in our new Noank’r mugs and toast us and another great weekend’s work!