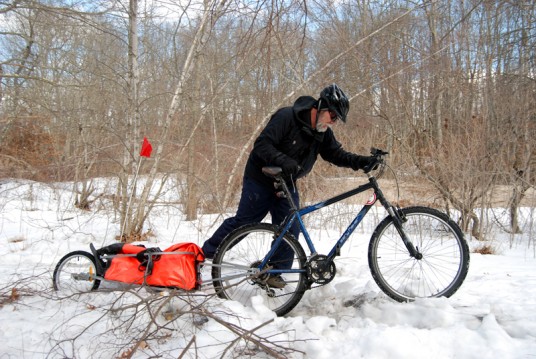 This week, we made it to the boat.

The streets were clear, but the paved trail was still raw snow.  Turning back, we made stab at the back country trail.  We could only ride across small patches, which left us with about 3 miles worth of pushing the bikes and slogging through snow that was up to 2 feet deep.

Sweaty work.  Very hard to do.

When we got off the trail in Mumford Cove, we cheered each other and relished the smooth roll over pavement.  And then it was straight to work.

The project for the day – priming everything. 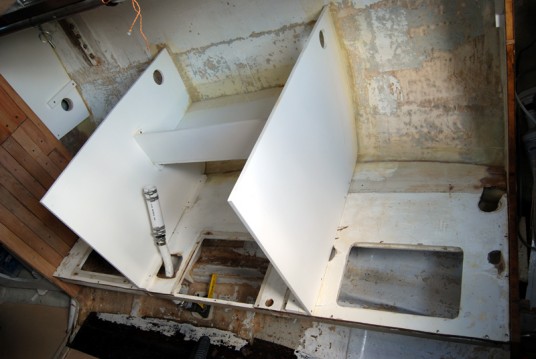 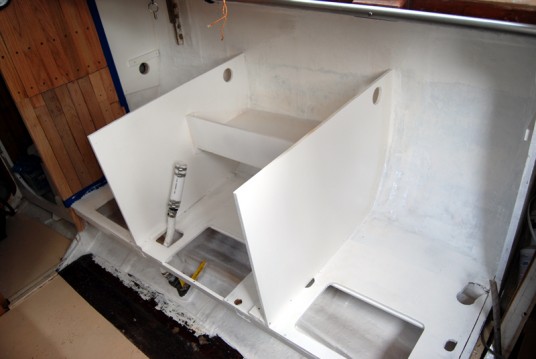 The smell was so foul that we couldn’t stay in the boat.  Cold air doesn’t move very fast and fumes don’t dissipate.  In summertime, we can do a project like this and go for food (exactly what we did).  When we come back, we can do another project or just relax aboard.  Not in the winter.

So we went to a movie.  Quartet.  Good movie, enjoyable.  I don’t think the big screen was a critical component of our enjoyment, but the big sound system rocked the Bach and Verdi.  But you have to know – we didn’t have to go to this movie.  We live this life.  The only element that was missing from what we live on a daily basis – ours isn’t a home for retired artists, and their estate was definitely not a dump like the place we live.

By the way, going to a movie means another 6 mile bike ride each way.  This time, in the dark and freezing cold.  We moaned and groaned a bit, but the light exercise (we took it easy) felt good after the morning’s labor.

Next day, we turned our attention to installing the hatches in the cabinetry.

An impulse buy put our plans awry.  We had combed carefully through the Mystic Marine Consignment shop’s bins of hinges to find some that would work for us.  We wanted strong, low profile, and easy to install.  We found two of the three.

The easy-to-install element was missing.  These hinges attach outside the cabinet and then inside the hatch cover.  This means that they’re made for a specific thickness of material and they weren’t made for ours.

The options: carefully route the backs of each hatch cover exactly to the depth of the hinge or spend another $80 on hinges.

At the Spicer’s chandlery, James spotted heavy-duty stainless hinges – the kind we had intended to buy in the very beginning.

…we’re hoping they’ll take a return at the consignment store. 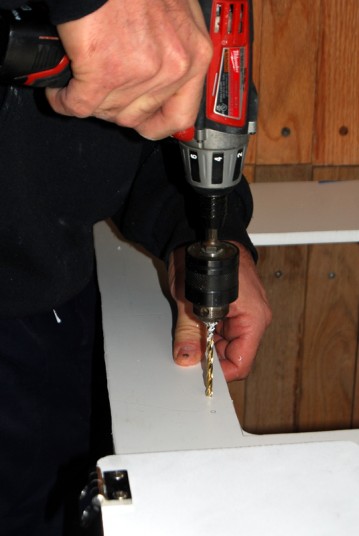 You can see how buff these hinges are.  We’re through-bolting them for the last word in strength.  Turns out, it’s hard to find a #10, 1/2 inch tapping screw with more than a couple threads – not the best situation for a hatch cover that could be stepped on due to a lurch in the boat’s motion at sea. 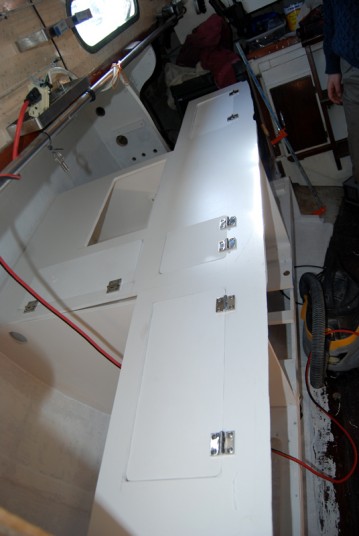 Second part of the hatch cover install is the combination latch and stopper block. 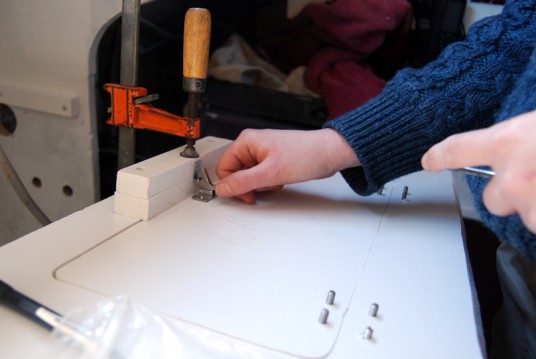 We’re not going to put the nuts on the bolts until we’ve painted the whole thing.  Lots easier to do without the hardware installed than by taping everything.

One last piece was installed – a brace for the big shelf that will also keep loose items from shifting behind the drawer when it’s pulled out. 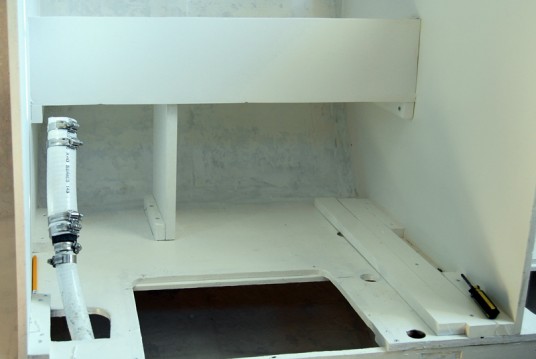 Last but not least, we followed up the previous day’s priming with some painting. 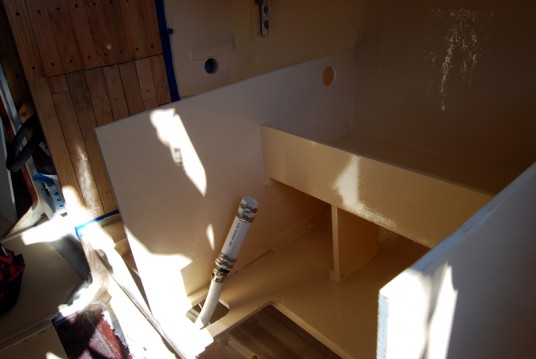 And then, (fumes) we beat feet out of there.  Or to be more precise, burned rubber.

On the way back, James thought we should try the high road – the paved trail.  After a shaky start, we rode about half the distance on clearish tarmac.  My least favorite moment was when the cart slewed sideways just as James rode onto an icy bridge.  Jackknife!  But no – he saved himself from the ignominious fall ass over pedals into the frozen trickle of a stream.

The last mile and half was riding on top of a 2 foot snow bank.  The sun had worked on the former powder to create a glistening crust that was several inches thick.  Where we dropped into other people’s foot prints, we cracked through and had to plow through the crust until surface tension brought us back on top.  Slowing down was tragic.  Stopping was sunk.

The ice built up on our brakes and the feeling was as though riding with the brakes on the whole time.

Breathless laughter and mock racing kept us moving until we couldn’t.  Then a little slogging to another firm patch and back on the bikes.

This was, by far, the most bad-ass thing we’ve ever done. (Says James.  Dena adds, “that couldn’t really kills us.”)  Note: there are no photos of this bad-assery.  We were busy.

We did burn an entire pizza worth of calories, so we put that back immediately.

Next week, we’ll be dealing with another fresh snowfall.  We’re itching to get the top and front installed, the plumbing in, and the stove suspended on its gimbals.  This is all possible, but only if we can get there… 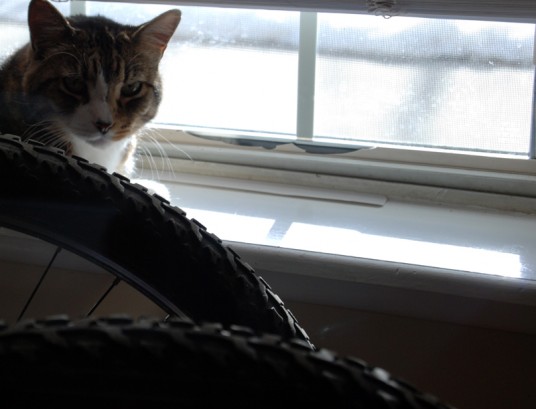