We got back to the community- shit, a million years ago- to discover that we were going to have a big (all) managers pow-wow in one of the unfinished 2nd floor apartments. We went up to the apartment, made ourselves comfortable and moments later were joined by the other two sets of managers. The lead managers showed up first, then the shit-heads and we got right down to it. The two leads told us when their last day of work would be and started talking about how there have been tensions and how “we” would “all” have to work together and respect each other and…

I (James) jumped right in and asked the only question that I thought really mattered.

“When are you two leaving?” I was speaking to the two shit-heads that have been lying about us and trying to make our lives miserable over the last five months.  They were supposed to go to their new community at the end of February or beginning of March.

The response was a simple, “At least two more months.”

The math made it’s way through my head… They weren’t leaving and our regional manager had already made them an offer to be the lead managers of the community and there was no fucking way I was going to work for those lying, cheating do-nothings so my response was simple.

“There is no way I’m going to work with these two fucking clowns for even one more second.”

Back to the boat.  Literally.  We jumped on our bikes and rode to the boat to finish the last day-off project – inserts to make the sinks usable as countertop space. 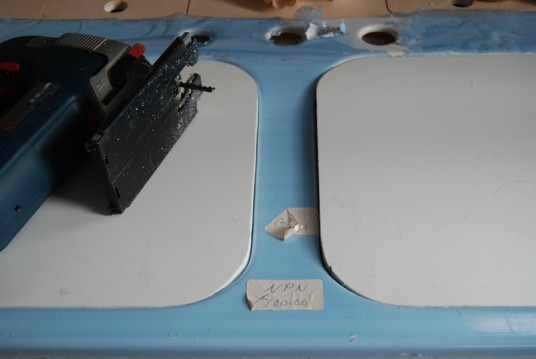 Then we rode back again.  The focus had shifted.

Now we have to make the boat livable, get all our shit on board (moving all our shit…again!), and create an environment for the cats.  The very next day, we put an ad up on Craigslist for a moving sale.  Two days after quitting, we sold everything we’d purchased in order to make that dumb apartment work for us.  Lighter and a tiny bit richer, we turned all our attention to the boat.

Livable means working stove and plumbing.  It means stowing our clothes and tools again.  It means installing the refrigerator.  It means devising a plan for our two roommates – the cats.

The stove has been a nightmare of parts problems.  We moved the stove farther from the tank, so we got a longer hose.  The fittings are the wrong size, so we hunted in vain for reducers don’t exist.  While we hunted, the weather worsened.  We’re still without a way of heating food, so this is our diet: 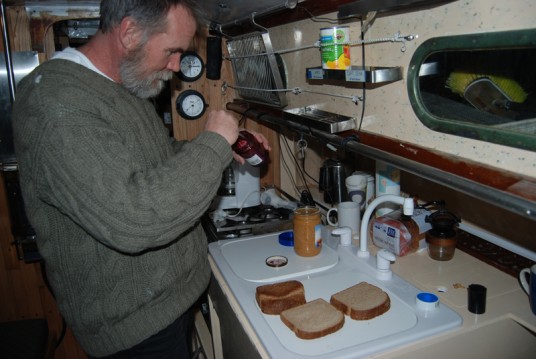 This fits not only our cooking options, but also our financial situation.  We’re doing it low-budget from here on, as we didn’t make enough money from the corporate hell in order to fund serious boat work.  We’re talking reusing materials and buying on the cheap at every turn.  And since we like PBnJ well enough and making the boat suffer is not an option…we’ll eat basic.

Installing the sink was another project of major importance.  Again, fittings were lacking.  We have managed to find them at this point, and both the pressure and foot pump are hooked up and working but not without that level of difficulty that you only get on a boat. 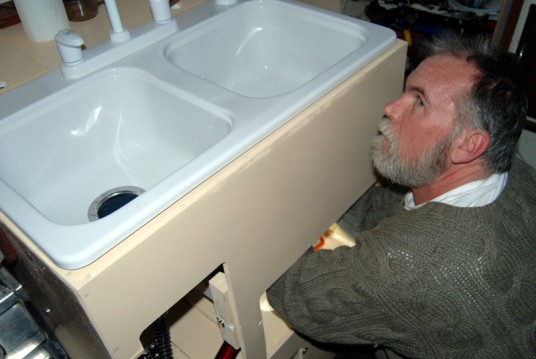 Before we could test the water coming in, we had to hook up the drain so it would have some way of getting out. 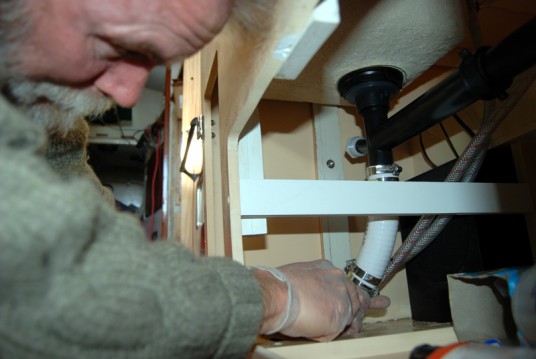 A process which proceeded with the usual number of skinned knuckles from tightening hose clamps.  We also had to replace our stiff sanitation hose with the flexible bilge hose you see in the next photo – it’s the stuff with the dark coil. 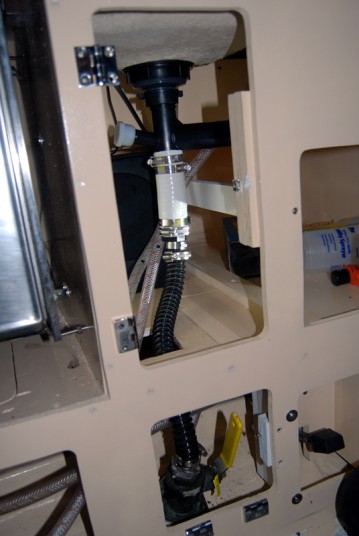 And then we ran some water. 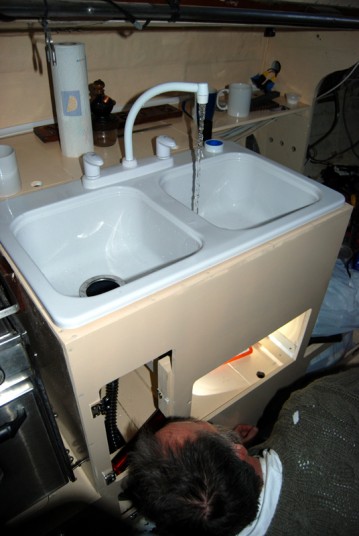 James filled a mug and sipped.  Then spat.

It seems that, when our bilge pump broke earlier this year, salt water sat on top of the water tank access hatches long enough to seep into the main water tanks thus fouling the remainder of the water we had in there.  Bad, bad, bad.  Now we’ll have to empty the tank, refill it, re-empty it, and probably shock it with vodka or bleach.  We’d more or less expected to have to clean the tank, but we didn’t foresee the salt.

Last on the list of things that did not go well – and this is a big one – is the refrigerator.  First, building it into the old hanging locker was a string-of-curses kind of experience.  It’s so strong and firm now, that it’s hard to remember what was difficult about it.  Building the compartment is overshadowed by our next discovery. 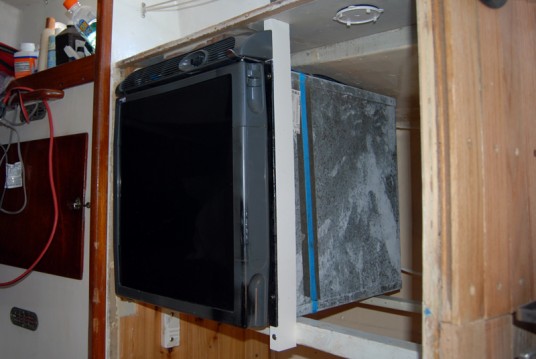 It comes on and runs for a while, but then it starts to short-cycle.  On for about 3 seconds, off for about 5 seconds.  Also, it’s not cooling.

So we rented a car.

By the way, there was this storm.  Gale force winds blowing snow around. 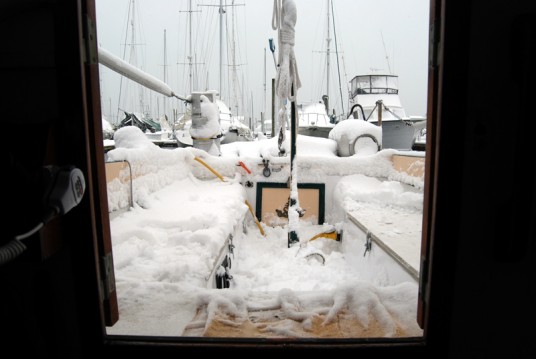 But we kept working inside the boat – luckily we didn’t have to ride to it! 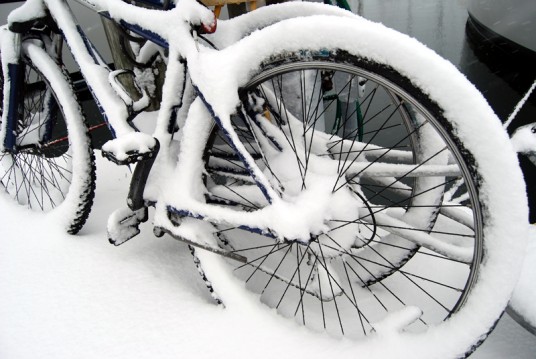 Living aboard is better.

Anyway, a stormy day seemed like a good time for the car rental.  We took the refrigerator to the nearest authorized service center just to discover they don’t even make the parts for it anymore.  I’m (Dena is) grateful to the service person who suggested we check with the parts department before giving them $75 to diagnose the problem.  If we’d paid $75 to find out that problem couldn’t be fixed, I would have been infuriated.  As it is, we donated $230 to a local marine chandlery (the same one we patronized for the hinges we didn’t use) and drove all the way to Rhode Island for no real reason.

Except – we hit a Lowe’s while we were there and got the trim we needed in order to move forward in the galley.

We cut the trim to the right length, putting 45 degree angles on the places where two pieces met. 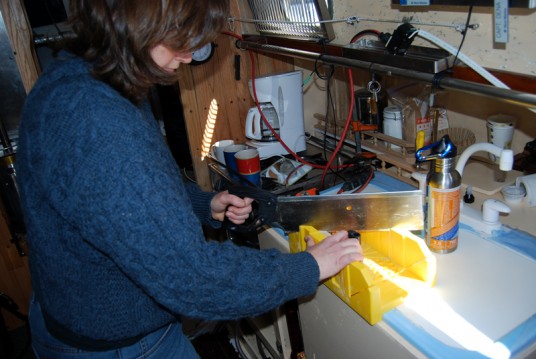 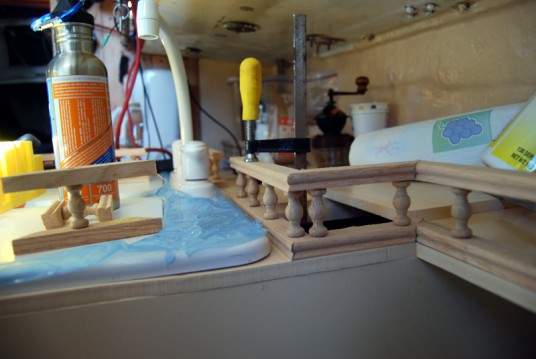 Put some primer on them… 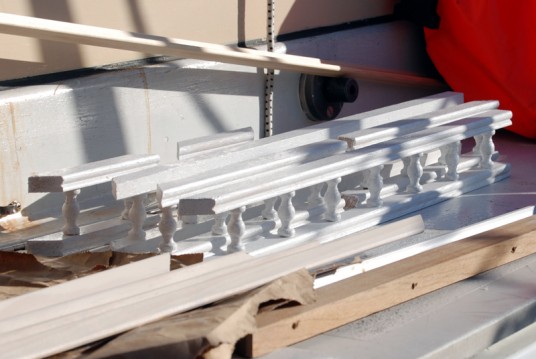 James put the first coat of paint on today.

Meanwhile, we also finished the drawer by cutting and routing out the handle. 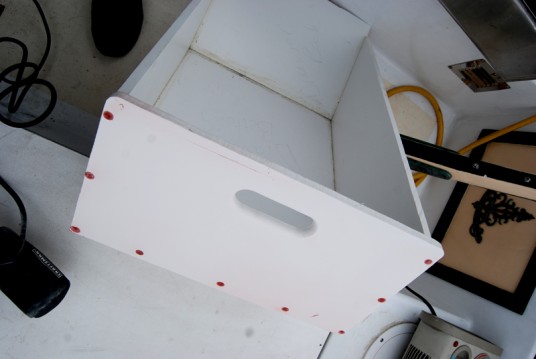 We also cut and routed the finger holes, then repainted the hatch covers. 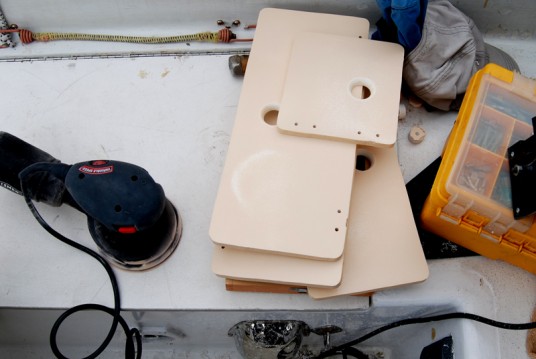 Finally, today, they were ready to install. 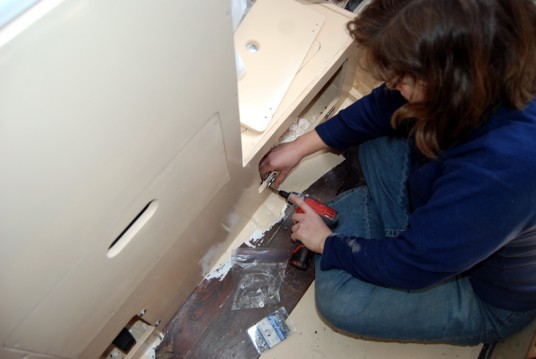 The galley cabinet is well on its way toward done. 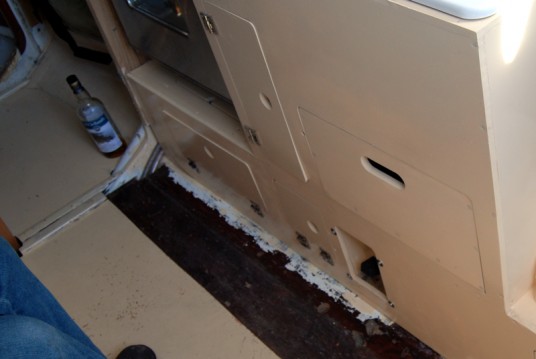 Hey – what’s that whiskey doing there?  Gimme that!

And yeah.  We’re getting things done at 10x the rate we were before and spending almost all our time on board.  It’s amazing how fast this stuff goes when we’re working on it every day, even when it feels like one step forward and two steps back.  Remember our favorite saying?

The only work worth doing. 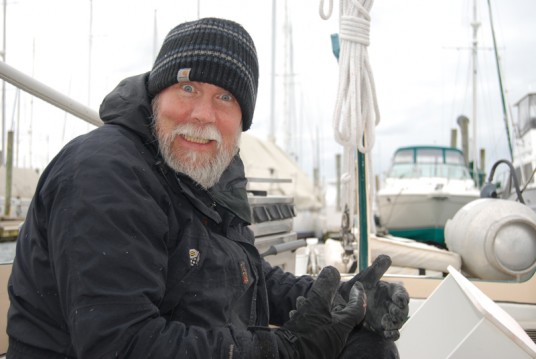