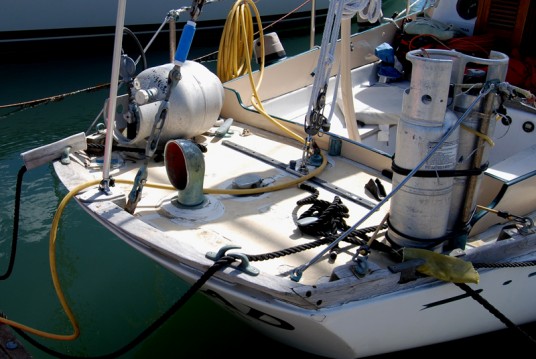 This is where we started.

So, just to let you know, this is going to be mostly pictures of the work we’ve been doing.  As soon as the weather warmed up enough that we could hope the epoxy would dry, we turned our combined attention to the aft deck, or fantail, if you prefer. 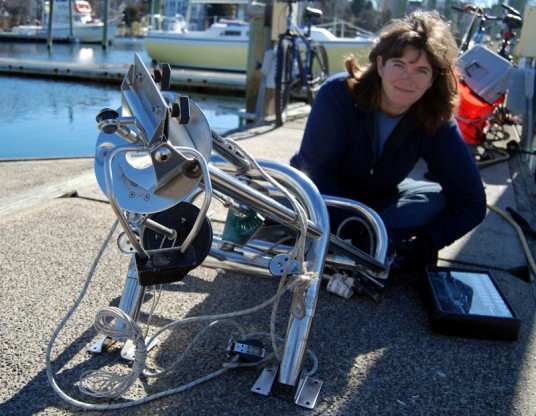 We’ve been fiending to get the Monitor wind vane (pictured above, with me) on this boat since we first saw it at the Marine Consignment of Wickford, months ago.  It works like this: a vane is pointed thin side to the wind.  The boat changes course and the wind angle changes, so the wind pushes the vane over to the side.  This turns a servo-rudder in the water and the water pressure pushes the rudder to one side.  That pulls a line through a bunch of blocks and attached to the tiller, steering the boat so that the wind vane is again straight up and down, thin side into the wind.  Strangely, wonderfully, it takes less than a moment for this to happen.  This is what steered us for 20 days between San Francisco and Hawaii.

First, we needed to prep the fantail, including the taftrail. 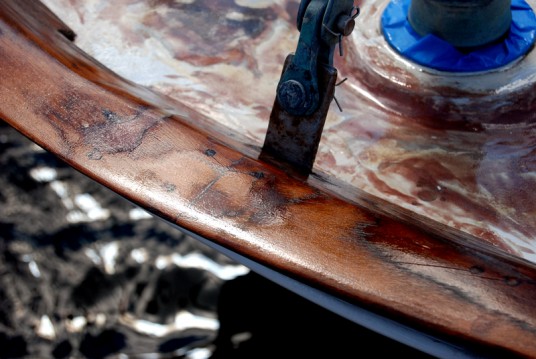 A big part of painting is prep. 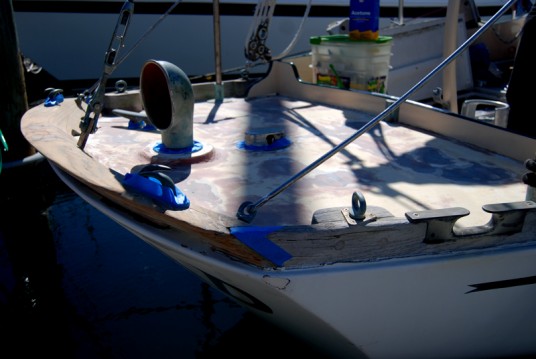 Which includes filling the holes for all the random hardware we removed, filling and fairing, and sanding.  That’s where we are above.  Below, we’ve coated that new surface with neat epoxy. 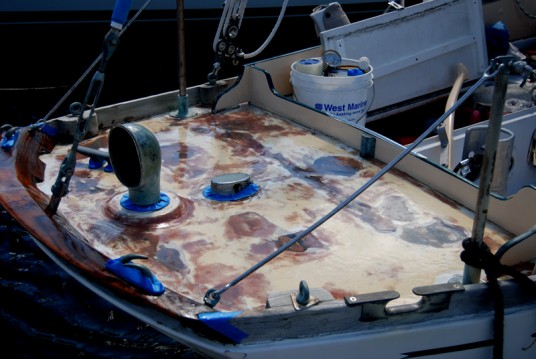 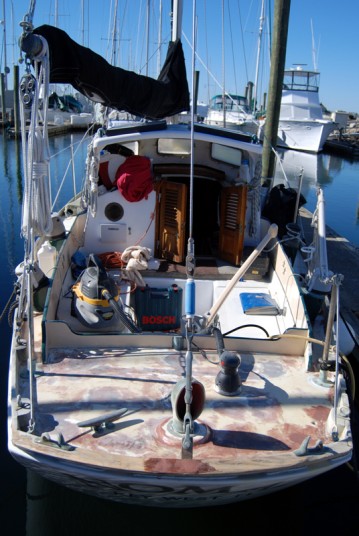 We wanted to install the Monitor and the Rutland 913 wind generator we already had, but they both needed bases.  We got these on before painting so that the 610 – thickened epoxy that, unlike regular epoxy, doesn’t overheat when used thickly – would bond chemically as well as mechanically to the fresh epoxy on the deck.  It was just a little too cold for it to cure in one day, so this phase stuck around longer than we wanted. 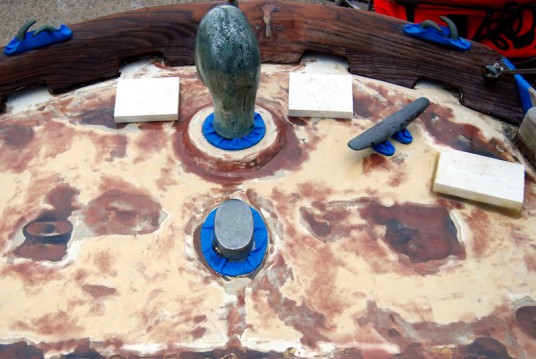 Finally, though, we primed. 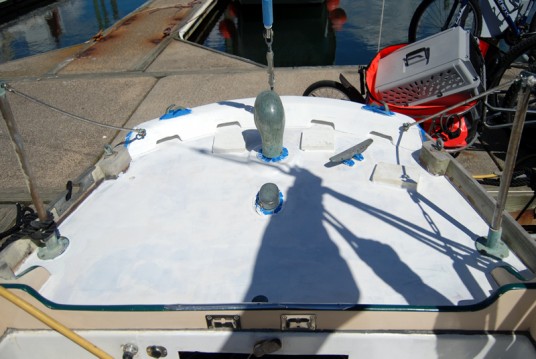 And painted.  Then we took several deep breaths each and drilled a bunch of new holes in the deck we just fixed. 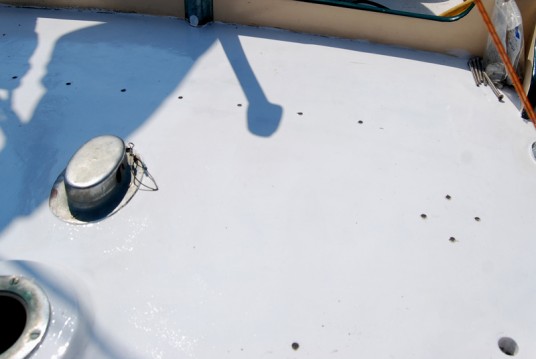 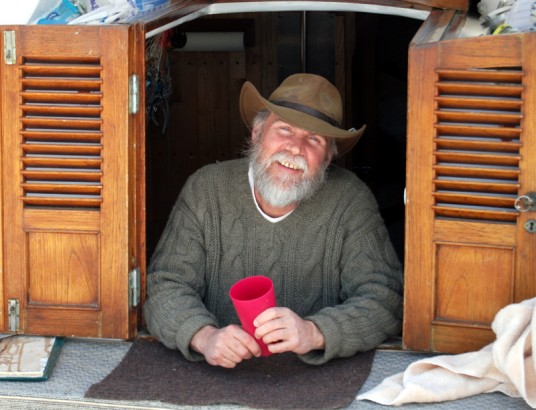 And then it was on with the deck hardware. 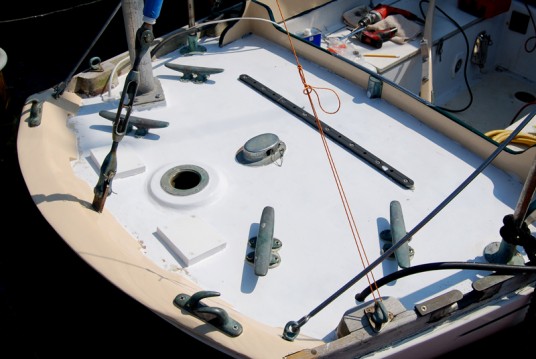 Now, that picture shows the wind generator pole in the upper left corner.  Now, we’re going back in time just a tiny bit.

Putting the wind generator back together was a task that covered everything from electrical wiring, pvc pipe fittings to piece together the different pole sizes, through manhandling the heavy thing into place and all the way to bolting it down with serious butyl tape. 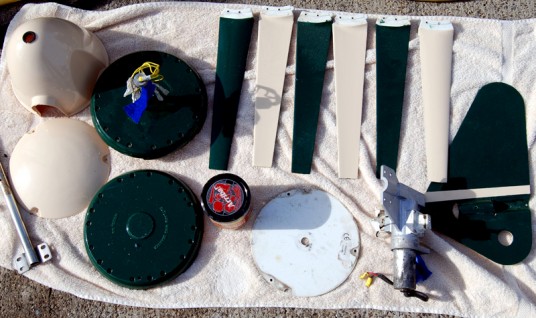 Then moving to wiring… 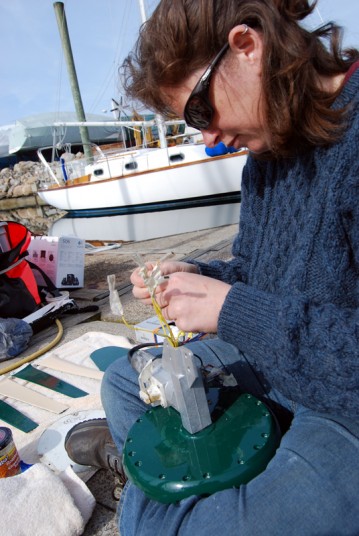 A closeup of the rectifiers. 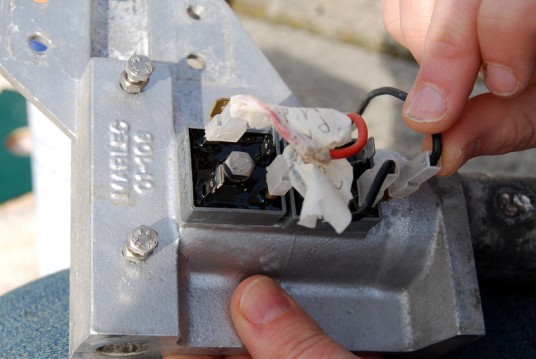 The whole thing went together pretty well after that. 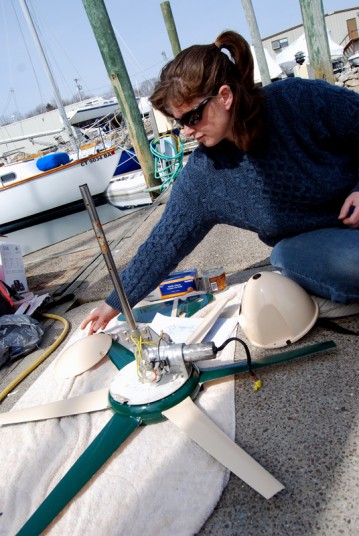 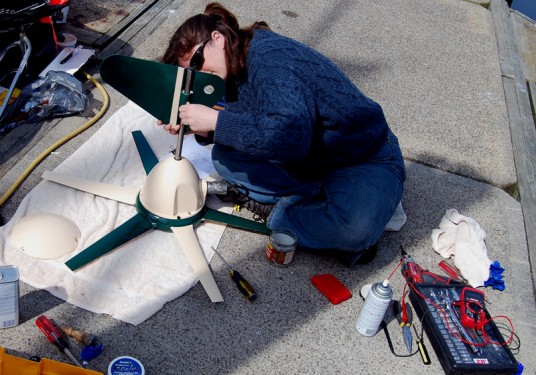 Once again – I’m not the only person who works on these things.  James, as the photographer, gets a visual bad rap, but is right there with me when not photographing me.

Then we were ready to put the thing on the pole and mount it.

And then up we went! 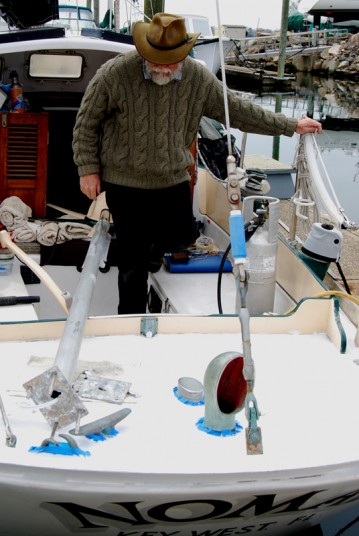 And guess what?  We started making power with it. 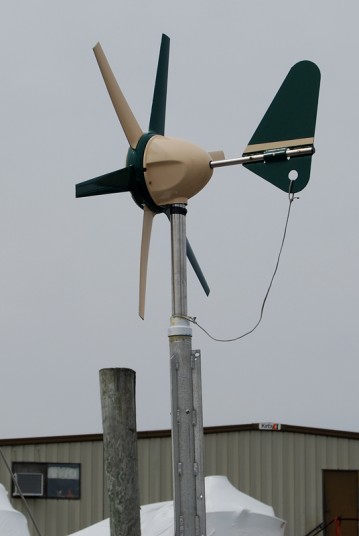 And on to the next project.   Cause we’ve been working feverishly like that.

We took the old mounting tubes and hardware off, drilled holes in the new tubes (feels strange to make such a short story of such an epic, cuss-word laden event), and bolted them into place. 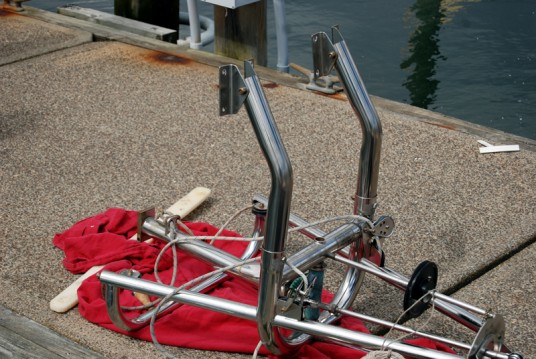 Once again, this is the second time we’ve done this job.  More often than not, that’s not the case.  So this one did go straightforwardly into place. 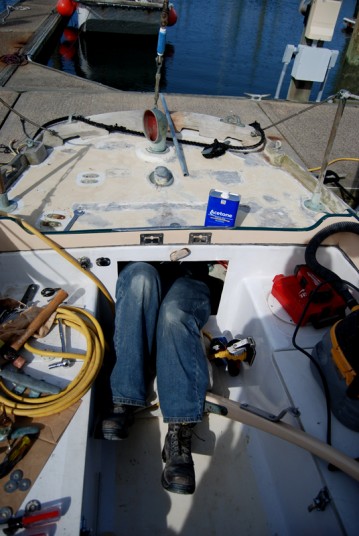 You have to know, through out this entire fantail project Dena spent most of the time in the aft lazarette which, as you can see, has a vertical opening hatch that is just big enough for Dena… 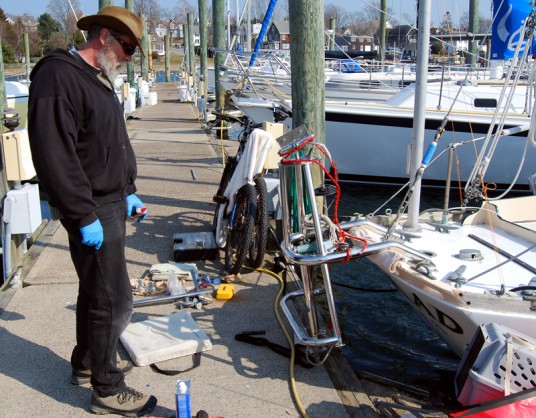 There are a total of 16 through-bolts with 1/4 inch backing plates holding this machine on our boat, it’s not going anywhere that we don’t! 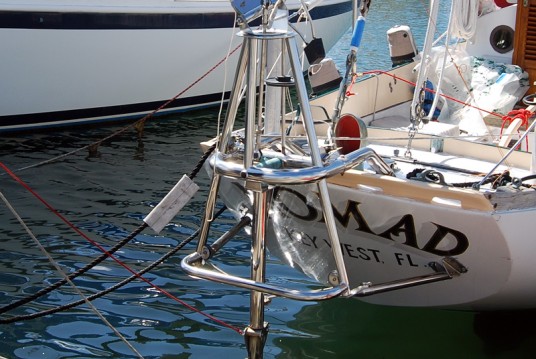 A thing of beauty!

…And this is how it drives the boat. 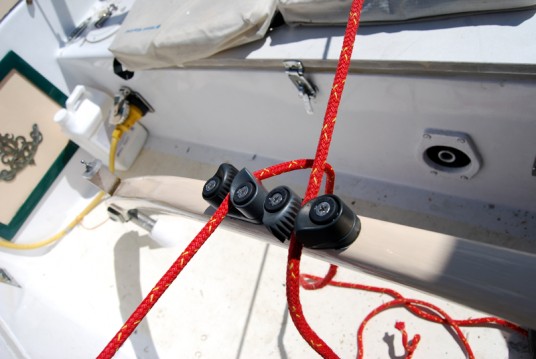 It really is that simple and it’s so much fun to watch. 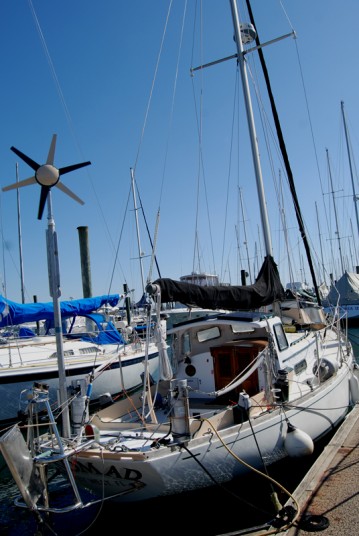 We finished just in time for a really nice weather window so we’re going to go out into the world and test this rig, starting tomorrow. 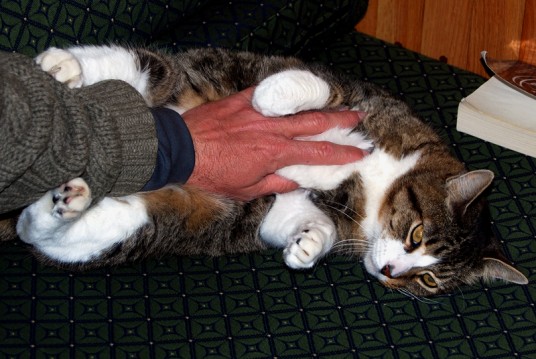