After months and months of working in these tight quarters with freezing hands, sore backs, bruises, bumps, knots and filth, we did it.  We just left!

But you know, it’s kind of weird, I (James) used to tell people at West Marine that if I got caught in a big blow, so be it, but I’d never go out in one! Well that’s a lie… I should have prefaced that statement with, “that depends on my motivation!”

When we left Spicers Marina at 12:00pm on Thursday, let me tell you, we were motivated and we had to be. The winds were honking at a steady 25 knots with gusts up to 30 with seas from 4 to 6 feet on the bow inside Fishers Island Sound.  It was intense but we just had to put those months of work  to the test. So, the big seas and the howling winds almost felt good… Almost! It was also really cold but motivation can be  powerful protection from the elements at least temporarily.

Once we got the main up, the reefs in, and the Monitor set, it eased up a bit but we were beating hard, heading for Three Mile Harbor inside the South Fork of Long Island. 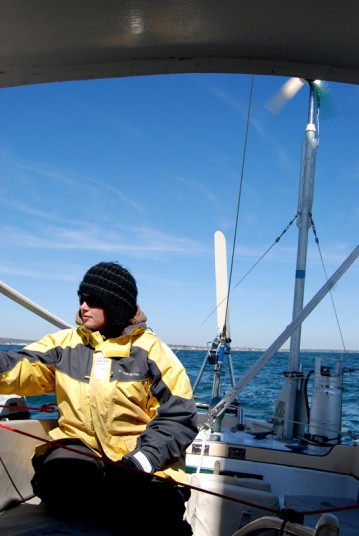 We met this sailor at Spicer’s, Doc, and we asked him, just like we ask all local sailors we meet, “What’s your favorite local anchorage?” and he told us it was “Beyond a doubt, Three Mile!”

…So Three Mile it was. But once we got out in the Long Island Sound and were getting our little butts spanked by Mother Nature, we started looking for other options. We could head up the Thames (rhymes with James) and shag a free mooring in New London and wait out the wind or we could go somewhere we’d never been before, like up the Niantic River, and put the hook down in a sheltered cove. Well, new is always a better choice so as we made North Dumpling Island we tacked and headed for Niantic. 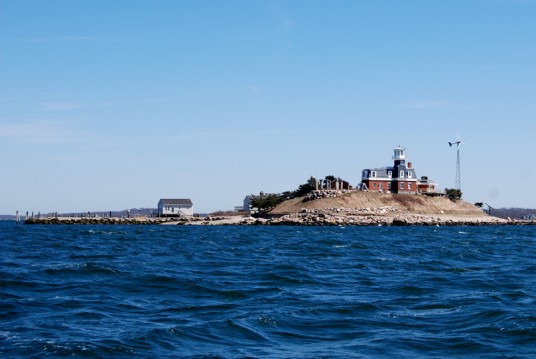 Six hours after leaving Spicer’s, just before sunset, we were hook down on the Niantic River with the anchor buried in mud and the chain payed out to 10 to 1 just in case the winds got heavy.  (10 feet of chain for every 1 foot of water depth.)

…And boy did they ever!

The wind didn’t let up for the next 24 hours so we spent a wonderful day, Friday, all by ourselves in that quiet little anchorage drinking rum, playing Yahtzee and cleaning up after our sea-sick kitty (he’s okay now, it was just that first few hours in the big seas that did it to him).

The best thing about sailing in the early spring is the fact that no matter where you go you will most likely be alone. 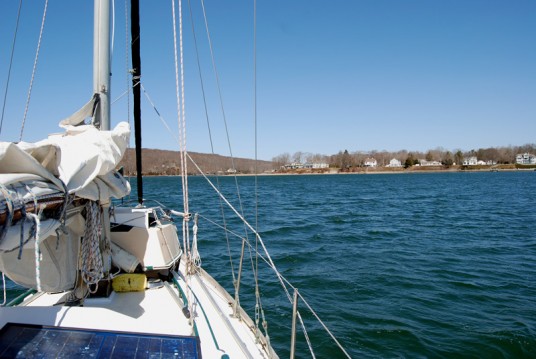 On Saturday the winds eased up just after noon so we hauled anchor and set off. 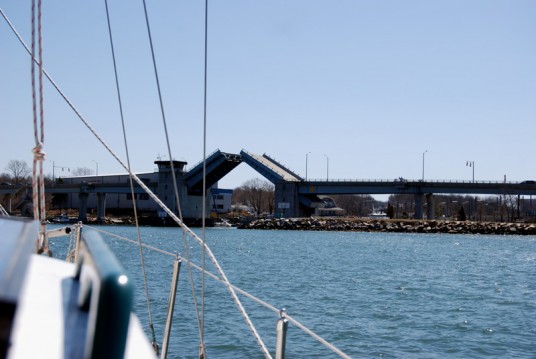 The Niantic River entrance is crossed by two bascule bridges.  One is a railroad bridge – only 11 feet off the water – and the other is Highway 156.  The highway is 32 feet off the water and all bridge heights are measured at higher high tide, so we would be brushing the bridge at low tide.  No way were we going to chance that.  Besides, there is nothing like the feeling of stopping traffic on a Saturday to go under a bridge! I called the bridge operator on Ch. 13 on the VHF and that’s all there is to it, they just stop the traffic and open the bridge for you, just like that! 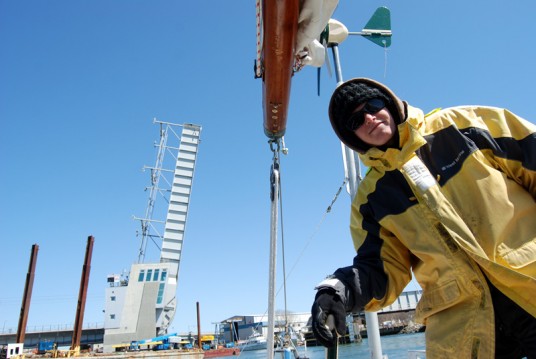 One of the main reasons we went up the Niantic River, besides the newness of the whole thing, was the fact that it would set us up for a very nice down hill run most of the way to Three Mile the next day and that it did.

We left the reefs in the main (just ’cause) and were under sail less than ten minutes after coming out of the river. 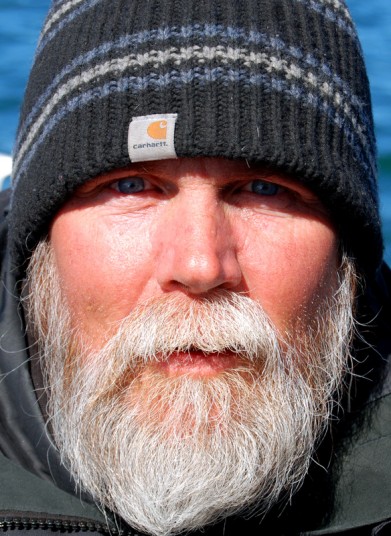 All the systems that we rebuilt or newly installed were put to the test. The wind generator works, I mean it charges, but we’re really not that satisfied with it. For some reason it’s a lot louder than it ever has been before and I believe that can be attributed to the fact that we painted the propellers. Another thing about the wind generator, it doesn’t seem to be generating as much power as it used to and we can’t really figure that one out. We’re getting most of our power from our 165 watts of solar panels and even living off the grid hasn’t put much strain on our power generating capabilities.

But the Monitor Windvane Self Steering system works incredibly! 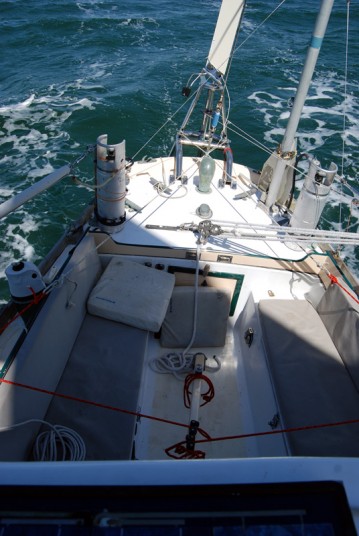 It’s such an elegant system to watch and it does the job it’s supposed to perfectly. 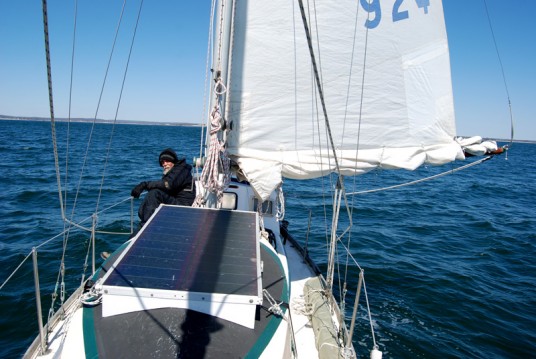 We sailed a down wind straight line across the Long Island Sound between the North and South Forks of Long Island through Gardeners Bay before we tacked up wind for the beat into the Three Mile Chanel. 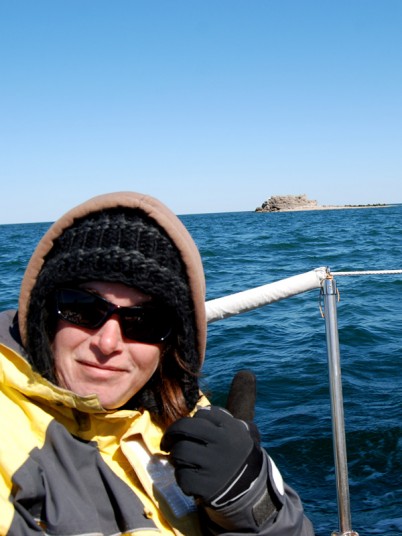 Yeah, it was cold and the winds were a bit fresh at times but here we are again all by ourselves in a beautiful anchorage in East Hampton, N.Y. doing what we do best, being free.

There are few mooring buoys out at this time of year and no other boats in the whole of Three Mile Harbor.  The wind has picked up again and we’re sitting tight today.  Maybe tomorrow we’ll row ashore and check out some Long Island, East Hampton style.

And maybe not.  The best thing about our lives right now – we don’t owe anybody an explanation.  We don’t have to ask anybody’s permission.  We can just do – or not do – whatever we want.