…Is freely given if graciously received. 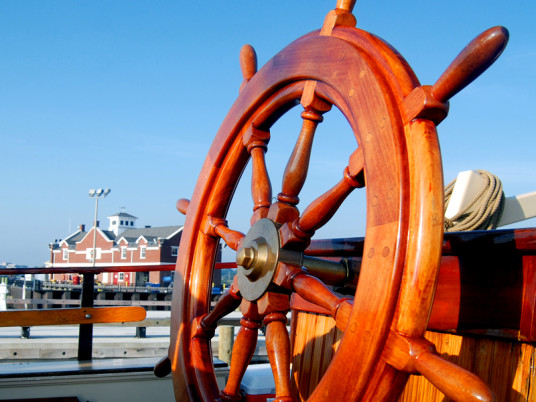 So I started working on the tall ship S/V Mystic Whaler on Thursday, July 18th and suddenly everything in my life changed for the better!

After my interview on Wednesday with Cap and Pat we came to the conclusion that I would make for a good ship’s engineer for the rest of the summer sailing season. The job is pretty much the same as the rest of the crew aboard only I’ve been given the added responsibility of learning and keeping an extra watchful eye on the working systems aboard ship. Those systems include the rig, the engines, the electronics, the plumbing and anything else that may need the attentions of a sailor with my particular talents and level of interest. Again, it’s not a job that pays anymore than any other job aboard the schooner nor is any more or less important than any other job but Cap and Pat just wanted to let me know that they recognize the fact that I would most likely be the guy that would be the first to jump in when or if the shit went down. In other words, they gave me respect.

For the previous three months I’d been working a job I hated in an industry I love for absolutely nothing. Really, I mean, yeah I got paid but that was all done by computer so I never actually received anything from my employers, no props, no thumbs up, no “hey that’s pretty cool that you rode your bike 13 miles through a lighting storm, after rowing your 7 foot dinghy in 5 foot seas to get to work”, nothing… Not even an inkling of respect after 3 months and my new employers dole it out in our introduction. Fuck yeah!

Captain John (Cap) Eginton called me Thursday morning and asked me to come down to the boat to pull some big 8D batteries (everything is big on this boat) to be replaced and to help put the yawl-boat engine on. We pulled the batteries without a hitch but ran into some trouble while trying to maneuver the schooner into a good position for putting the 25hp outboard motor onto the yawl-boat . Putting the outboard on didn’t work out so well so it turned out to be a rather short day for the new ship’s engineer. 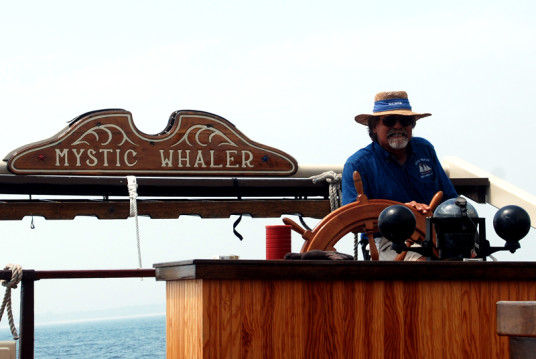 Dena and I boarded ship on Friday morning and we were underway for my first cruise by noon that same day.

Let me take a moment to try and explain how incredible this boat is. The sailing vessel Mystic Whaler is a 110 foot, 97 ton gaff rigged staysail schooner, meaning she is an incredible sight on the water! Wherever she goes she’s the rock-star and this week we sailed that beautiful boat to the Great Salt Pond at Block Island, Rhode Island, via one of our favorite anchorages, Dutch Harbor, Rhode Island. (Remember that from last year?!) 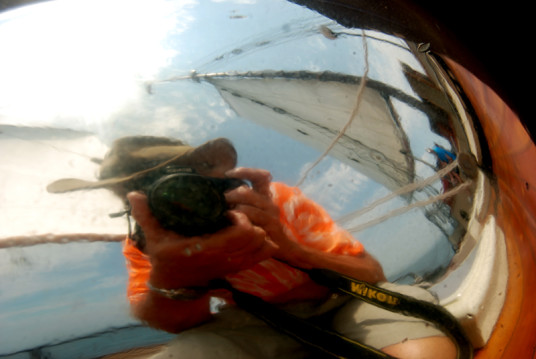 On the way to Dutch Harbor we polished up all the brass (photo above), served up some truly incredible food and caught some of the most spectacular winds that I’ve ever had the pleasure of sailing in! Once we entered the Block Island Sound the winds were SSW at 20 to 25 knots with seas rolling at 5 to 7 feet. The ship was in her element cruising at 10 knots when Cap called for a flying tack. A flying tack is almost exactly like a regular tack but you bring the boat 180 degrees back around into the wind and in seas that big it’s one hell of an intense maneuver.

I’d never done anything like that before so all I could do was be kind of a glorified spectator. Dena and the rest of the crew had been through this quite a few times before so they showed me the ropes and before I knew it we were on a direct course for the Narraganset  Bay on a heading for Dutch Island.

After the flying tack Cap asked me to take the helm and gave me my course and heading along with a few landmarks to keep me in the pocket. When I told him in short order I had the bearings he finally asked me if I’d ever been into Dutch Harbor before. When I told him it was one of my all time favorite places he kind of chuckled and before going below he said, “Well then, Mr. Local Knowledge, take her in.” So I did.

He took over as we passed east of Dutch Island and brought the Whaler within 50 yards of where we (Dena and I) had anchored last year. It was a beautiful sight to behold and believe me, we were greeted in the full anchorage with lots of enthusiastic waves and cat calls.

This was my first three day “Full Moon” cruise so once we got the hook down and supper devoured and cleaned it was time to bleed on the sails. It had been a couple of decades since I’d furled a sail on a big schooner so my hands were not quite up to the task.

Furling sail on the Mystic Whaler is like any other job on a boat that size, it’s huge! To furl the main and the foresails  you actually have to (get to) get up on the boom, bend over the gaff and furl the sails into a nice little tight package for all the world to see and to do that your hands have to be up to the task. Before getting up on the boom everybody told me that if I didn’t bleed, at least a little bit, on the sails I wasn’t doing it right and even though I blew off the remarks, the fact is, they weren’t kidding. When you furl you have to grab the heavy dacron sail with your entire fist, pull it up to your chin, pull it aft and then lay it back down on the boom on top of your feet. The Dacron is not only a rough material it is sharp and full of salt so it cuts into the tops of your knuckles and you (I) bleed all over the sail and of course, it burns like a mother fucker! But, I not only got used to it, my hands callused up on top of my scabs in very short order so I only bled that one night. Then I slept like a baby… “A hungry, angry BABY!” 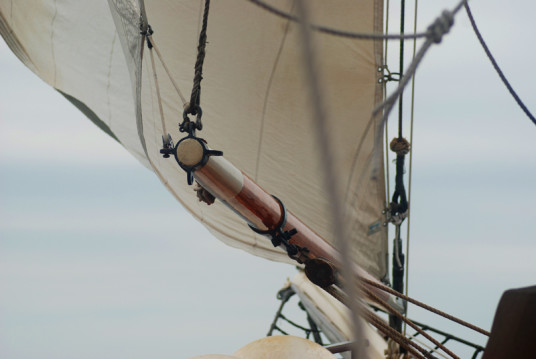 The next day we were up at 0600, fed and caffeinated by 0730 and underway by 0800, just in time to get our asses handed to us by Mother Nature on our way to the Great Salt Pond on Block Island. Before we exited the Narraganset Bay we got hit by a squall packing 30 knot winds and a torrential down-pour that soaked the crew to the bones and very effectively sent all 18 of our paying passengers down below to their warm, dry cabins. We were under full sail so the crew were all tasked to keep a weather eye and a sharp look out  and that is when Pat discovered that the new crew member had made a terrible mistake when we set sail.

When hauling sail you get the sail all the way up, you put a stopper-knot in the halyard line, make the line off at the pin-rail and let-loose the stopper-knot. A stopper knot is a very simple knot to make and, in turn, is very easy to let loose. Well, this new crew member improved a knot, a double-turn with a half hitch, and when the weight of the sail, (about 1,700 pounds on the Main, 1,400 on the Fore) came down on that knot it was impossible to let loose, even with three of us pulling on it in the squall… Cap pulled out his knife and cut the knot and I, the new crew member, got to swallow the shame of putting us all in grave danger during a storm. But, we didn’t die, and the storm soon passed.

By 1330 we were back at anchor and I was humbly making a new line for the mainsail stopper knot. By 1500 we were all swimming in the cool water of the Great Salt Pond… We were alive and I was forgiven and Cap and Pat both put me to task at learning from my mistakes and moving on… Now!

That night the moon was full, the sky was pink and the air and the food and the company were the very definition of the word sublime. 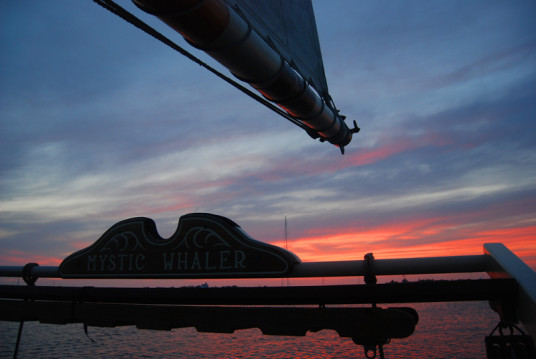 The next day we sailed back home to New London and were back on the dock by 1500 and it was as if we’d never left.

My first big adventure aboard the S/V Mystic Whaler and yes, I bled on the sails, I fucked up and put our lives in danger but I stepped up, fixed my mistakes and in turn earned the respect of my shipmates.