Now, when I was in the marine hardware industry and people asked me what my thoughts were about going out in heavy weather I used to give them my standard answer, which was, “If you get caught out in The Shit it’s good to be prepared for it, pull your reefs in, don your foulies and grin-and-bare-it, but don’t go out in it unless you absolutely have to!” I believed then as I believe now that that’s sound advise… With that said.

We didn’t really have to go, although the 15th was the loosely set deadline that the Liberty Landing Marina gave it’s winter residents, they seemed pretty cool about that date, but we went anyway.

The winds were on the bow at 15 to 20 knots from SSW as we made the Hudson River but the day promised an increase in winds to 40 knots from NNE by that afternoon and we knew it going into it.The tide was also just starting up against us as we headed down river towards the free anchorage behind the Statue of Liberty so our speed at 2400 RPM ranged from a screaming 2.1 knots to a trudging .8 knots. In other words, slow going at best!

“What the fuck are we doing out in the shit?!” We silently asked ourselves, and yet, there we were, in the shit directly going against our own “sound advice”.

To be quite honest with you, even though we were barely moving and the wind and waves were pounding us and the wake from the packed tourist boats was, well, what it was, we never even once brought up the fact that we were needlessly out in the shit.We just kind of dealt with the weather aspects, laughed at the tourists boats and loved the fact that we were together doing what we love to do. It was awesome!

We traded off the helm and made the anchorage just as the winds really started to pick up but the wind was still mostly from the south so as we came around the Statue our speed went from 1.6 knots to 7.8 knots in the blink of an eye. We backed off the throttle and glided into the anchorage.

It took all of 5 minutes to set the CQR with 90 feet of chain in 14 feet of water and just like that we were home.

We rowed into the public dock, tied up the newly painted dink… 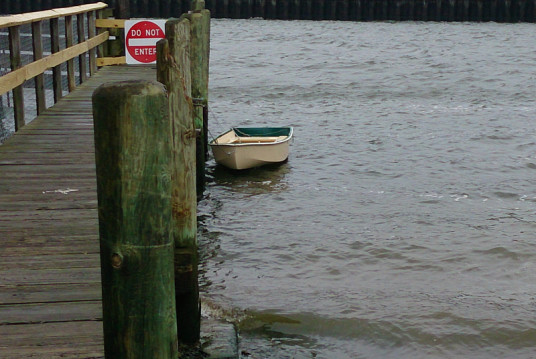 …Then walked back to the marina to get our bikes, stopping on the way to take pictures of our beautiful boat in her natural environment, hook-down. 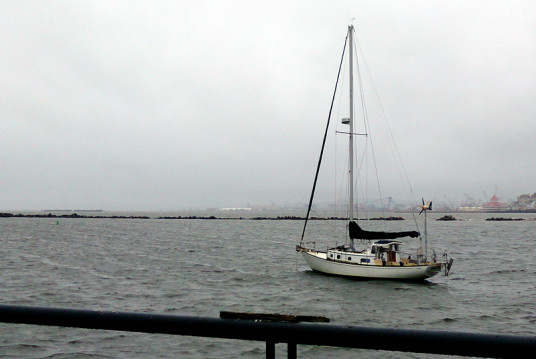 If this looks familiar it’s because we’ve anchored here twice before; once when we were on our way to Maine in 2012 and again last fall when we came down from Connecticut. It’s good solid holding in a good neighborhood, across the street from a cool family owned diner and we hope we can stay here until we want to leave, as opposed to being chased off by the water piggies.

When we got back to the boat that evening we installed the new hardware on our, long since broken, propane heater and it’s a good thing we did because as the winds came around from the NNW that night it brought with it what we hope will be the last snow and ice storm of the year. That’s right, it’s fucking April and it’s snowing in Jersey!

As I’ve said before, I work over-night in Tribeca-NYC so when Dena and I rowed back to the public dock that night the wind was howling at 40 knots dead on the nose of the little boat with ice pellets pounding Dena’s face and the back of my head as I rowed the 200 yards to the dock… That seriously sucked!

It snowed all night and the temperatures dropped down to 29 degrees leaving a sheet of Ice on the big boat and of course in the dink. 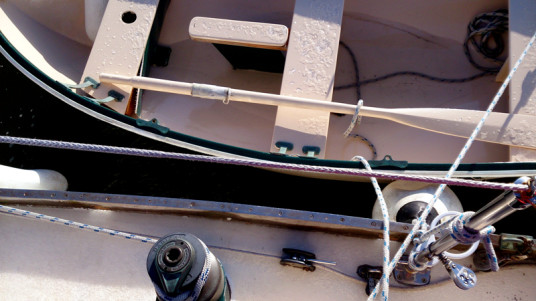 Today the wind came back around from the SSW to give us a little taste of spring to come. The temperatures came back up to the 60’s and it looks like we’re facing a week of increasing temps. So maybe, just maybe it won’t be so bad this summer, on the hook, behind the Statue.