I show up at 4:30 in the middle of the fucking night after a six and a half mile bike ride to find I still have a trashcan full of water on my desk, I’ve asked my “team lead” four times to fix the leak in the ceiling above my computer… It still isn’t done. There’s a box on my desk it’s addressed to Dena Hankins, C/O James Lane, C/O Whole Foods Market. It’s Dena’s advanced copies for her novel Blue Water Dreams.

I do my job, I let my country steel my tax money, I smile, I work like all the rest and then I step out of my wage slave gig, it’s Friday afternoon, my Monday and I notice I have two voice-mails on my phone.

“Everything’s okay, I got the boat anchored in the little cove in front of the rehab center, we’re fine. If you want to go to the gym to work out,  go ahead, really, we’re fine!”

When I get to our new anchorage Dena is sitting in the cockpit, she rows out to the water-taxi dock and I pull the box out of my pack and hand it to her… 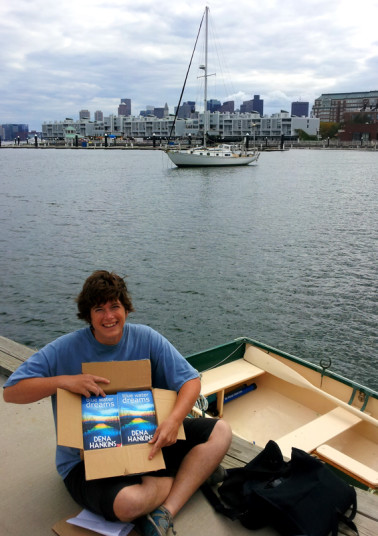 She did it! She published her first novel, they printed it, put ten of them in a box and sent it to her and when she opened that box this is what she looked like!!!

Everything else instantly became insignificant, well, for the moment anyway.

We went out for a very nice dinner and showed the copy she gave me to our waitress and we got a free desert out of it, it was sublime.

What had happened was, the Coast Guard had to bring a giant propane tanker up the Mystic River, just a few hundred yards from where we were anchored, evidently, to make some kind of emergency repairs and they had to clear the area of any potential hazards… That would be us I guess.

Anyway, we ended up staying in that anchorage through the weekend and on Monday evening just as we were settling in for the night a Harbor Master boat came up along side of us with a po-po woop-woop. The guy that did all the talking was over fed, under exercised, lightly educated and seriously late for his tea party, in other words: the dude had missed his calling as one of Ferguson’s finest and ended up getting stuck hassling us that evening, an unfunny clown, armed to the teeth.

We did not get shot that night and the reason being, I (James) did not open my mouth. I stood there in the companion way with a smile on my face the entire time, making him very nervous by not showing my hands.

“You need to pull up anchor and leave, right now! Do you need assistance?”

“No! (We said in unison, okay I did say something), we’re rather good at this, thank you, goodnight.”

After the “Dock-Boys-with-Glocks” motored away we made reservations at one of the pricey Boston waterfront marinas, pulled up anchor and sailed away. After grabbing a mooring ball we caught a water-taxi back to where our bikes were and rode back to the Boston waterfront, rowed the dink back out to the boat and very quickly went to sleep.

About an hour after going to sleep I woke up violently sick to my stomach so I ended up working the next day on about an hours worth of real sleep. My only explanation: Yes, fascism makes me ill.

We left the waterfront the next day Tuesday, my Friday, and motored back to “our” anchorage up the Mystic River where we’ve been now, unmolested, for two beautiful nights.

Yes, we choose this, this is the way we live! We are free citizens of the planet Earth and we are not going to give up that easily.