Remember way back when?  We built a new galley and we gutted the locker on the starboard side, forward of the galley.

Our original plan was to put the stove in that locker.  It didn’t fit.  We decided to put our new refrigerator there.

The remaining space, we’d use for trash, tools, and laundry.  We’ve been keeping trash and laundry there in entirely makeshift arrangements.  We tied the trash cans down to the loose boards across the fridge braces and looped the laundry bag’s straps around the braces to keep it in place.  It worked.  It wasn’t pretty.

Two weeks ago, we had a major flood at the Whole Foods Market where I (James) work.  Everything that was in the sub-basement was very quickly evacuated and put into a dumpster.  That’s where I discovered this beautiful triple-decker pallet made out of the most exquisite ash.  It’s a wood I’ve used in the past and loved working with because it’s soft and malleable, but not as porous as pine. 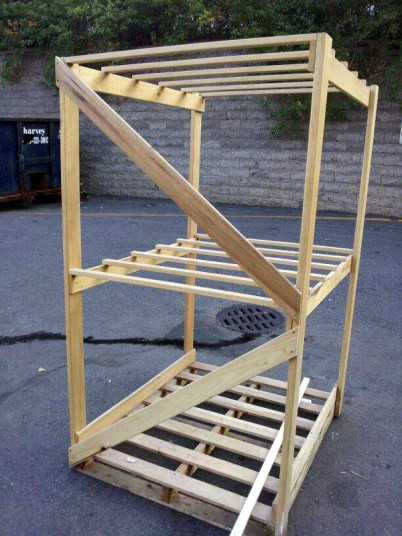 Why haven’t we done this project before?  We needed materials but we didn’t want to slowly collect a bunch of shit and store it on the boat until we had enough for the project.  We don’t have room for that.  When I saw this pallet, I instantly knew that there were enough pieces of really nice looking wood to frame and build everything we needed to do in that space, plus frame the new battery compartment.

I took a drill to work and, on my lunch break, I disassembled the pallet and very neatly stacked the wood in a safe place in the basement.

Last week, we borrowed a co-worker’s van, loaded up the wood, brought it back to the dock, piled it into the dinghy, and rowed it out to the boat.  We returned the van with, “It doesn’t matter how much you hate somebody, don’t ever let them borrow this van.” Wow, what a death-trap.  We survived.

Over the last week, I (Dena) have done measurements and drawings, conceptualizing exactly what we wanted to do in that space.  The concept is this: a hamper that slides out on tracks next to a double-bin trash compartment, also on tracks, both under the brace for the refrigerator.  Above, we will put three shelves for tools, two set back so that we can use the bottom one as a work surface.

The concepts have been around a while.  The measurements and precise plan had to wait on materials.  When James scored us these ash planks, I had the last piece of the puzzle.  I mocked up a couple ideas, measured and drew some more, and yesterday, we made the first cuts.

Trim first.  The fridge is set back a bit and we didn’t want to lose that space. 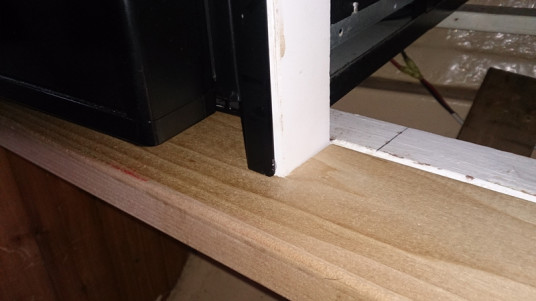 Not only did I (James) have to cut it to size, I also had to notch out the vertical supports for the refrigerator.

Sometimes it’s easier and more of a sure thing to build things in place.  So we started the dirty clothes hamper on the forward side by attaching the first slide. 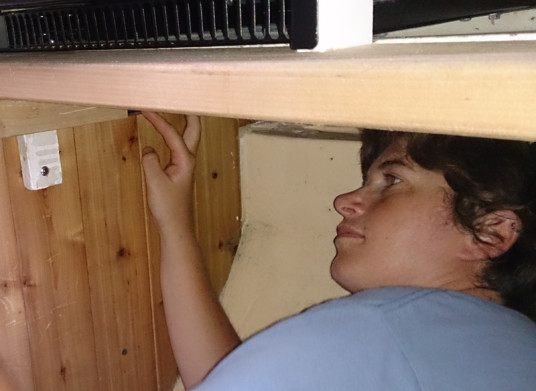 Then we judged the width of the whole thing by putting the actual planks together. 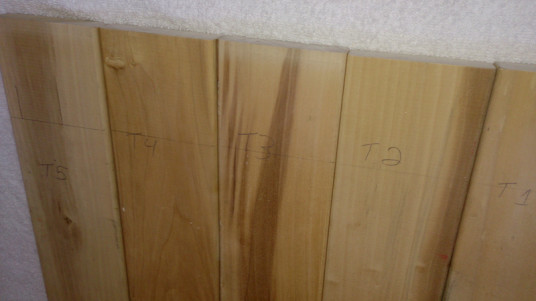 Because we were working with a jigsaw, we didn’t want to make any long cuts with the grain (ripping the plank).  So we just went with the width of the wood as our guide and used five planks.

Once we had them cut to length, we fastened them together using a tie piece and reinforced that with another half-way down. 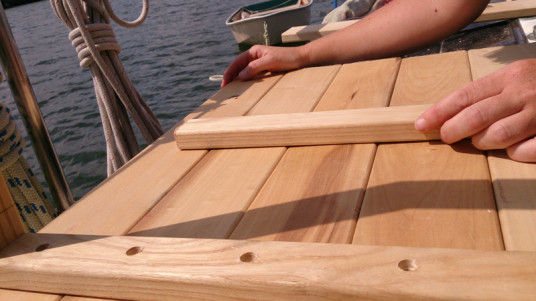 The wood is so beautiful that we didn’t want to use any glue on the face.  That’s why we decided to go with the tie pieces on the back, where we won’t see them.

With the width precisely known, we installed the second slide support and had a mock-up of the final hamper. 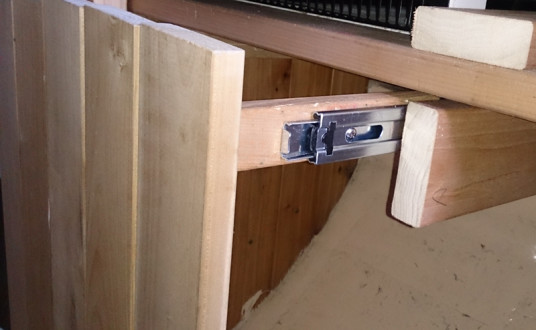 We now had a lovely face, four sides screwed together making the rectangle shape at the top, and the sliding mechanism.

It worked, but it wasn’t very strong.  We’d known it would need to be reinforced, so we pulled it out of its new home and cut, drilled, and screwed two diagonal support beams. 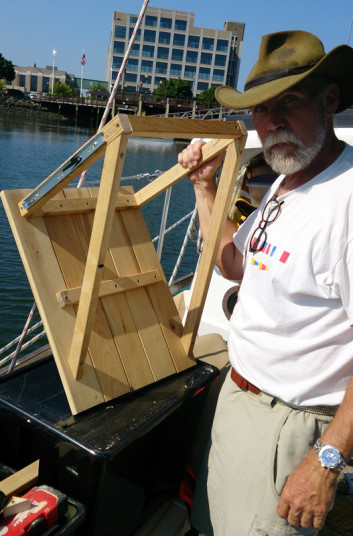 Back into place with it, and we added the linen bag that came with the slide tracks.  Voila!  A clothes hamper that holds clothes and slides in and out. 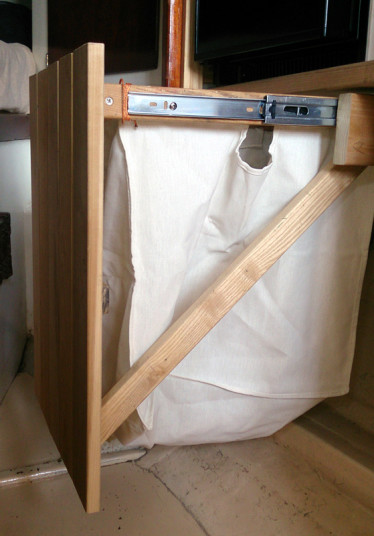 Whew.  And it only took two years.

The trash bin is next.