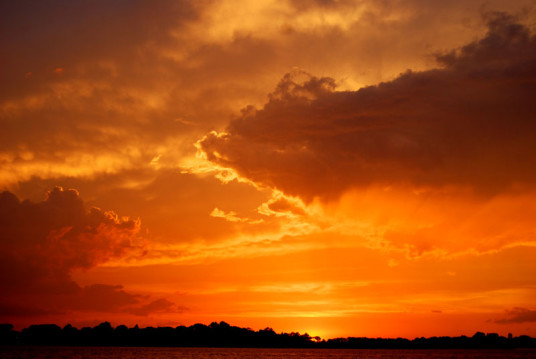 Wessagussett is a lovely place, barring the wake created when hundreds of plastic destroyers caroom from the Fore and Town Rivers.  Fourth of July weekend was topsy-turvy on the good ship Nomad. 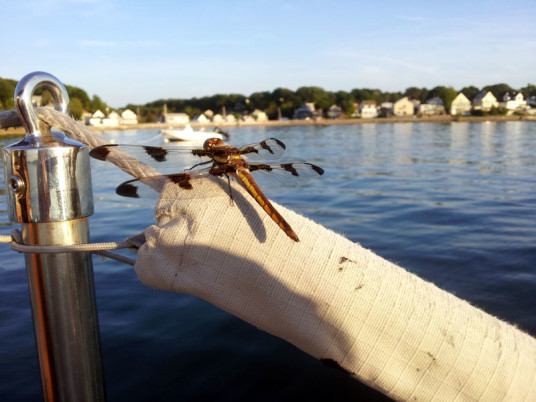 The wildlife is well-behaved for the most part. Small fish jumping, the birds didn’t shit on us, and the mosquitoes were far enough off-shore to be too exhausted to suck by the time they’d made the crossing. Even the big bugs were more cute than creepy.

The underwater life was teeming, as our encrusted bottom can attest. But a good scraping and we were still able to make good time once underway. (Spoilers!)

We were almost out of building materials, so I (Dena) rode my bike to the hardware store and came back with some Azek. Anyone who has seen Jaws knows there’s a knot called a sheepshank. How many know what you might use it for? 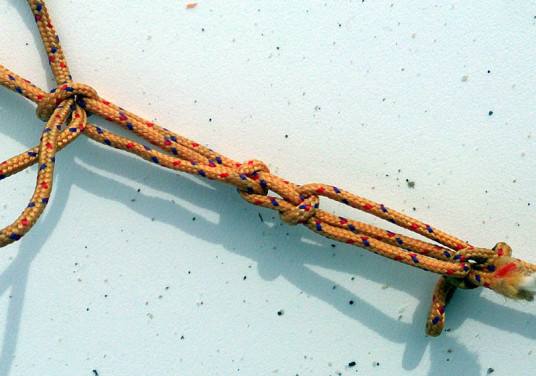 Well, it makes a mighty fine tie-down when you want the pressure to be the same on both sides. Once on the boat… 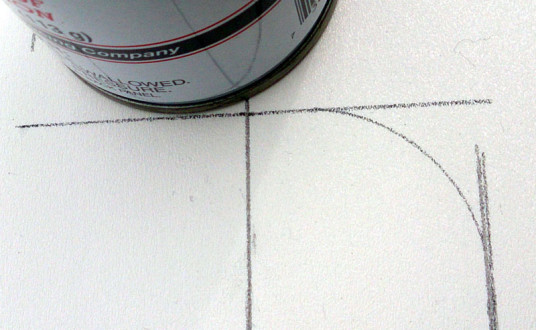 I made dividers for the storage shelf behind the sink and stove – a project two years in the making. The photo above shows me using the tools at hand to create nice even curves. Translated into cut pieces, they look like: 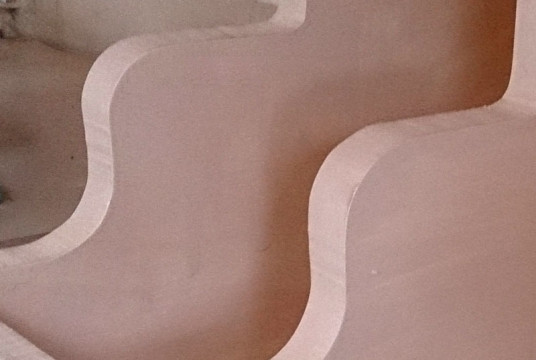 The aft rail needed bases for the forward feet, and we cast them of West System 610, using Azek for the bulk. The 610 hardens exactly as you shape it, so there was some smoothing to be done after. 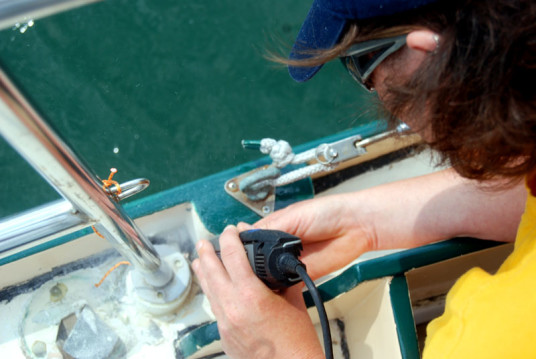 The Dremel works so well powered by the inverter (sun power!) that we could take our time and make them right.

Then, as we brought up in the last post, we started loading that rail with stuff.  We made bases out of Azek. This is when we found out that the router doesn’t like the inverter as well as the Dremel does. Sometimes you need a strong tool, so that’s fine. We rowed ashore with the tools and the Azek, then back out again with the insets for the propane tanks cut into the Azek and secured them to the wooden taftrail. We moved the propane hoses (more holes in the deck!) and secured the tanks at the top. 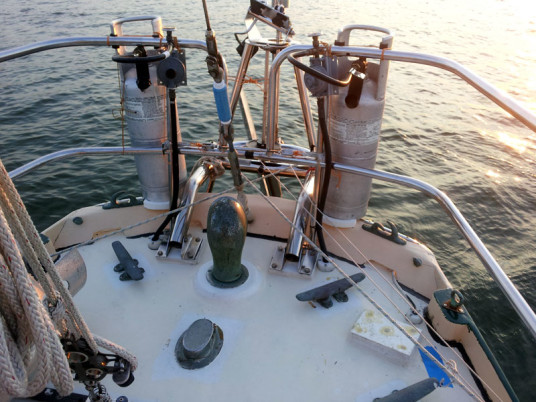 Then it was no holds barred. 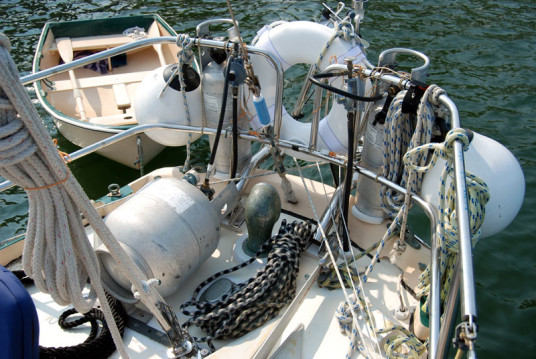 There’s even a Monitor wind vane back there somewhere! No wind generator…not yet, anyway. 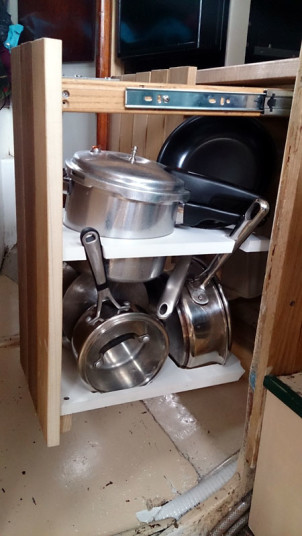 Belowdecks, we prepared by arranging our pots and pans for travel. The cutouts were tricky, but it worked out very well.

Also, our odds and ends are less odd and easier to find now. If we need rigging tools or hardware… 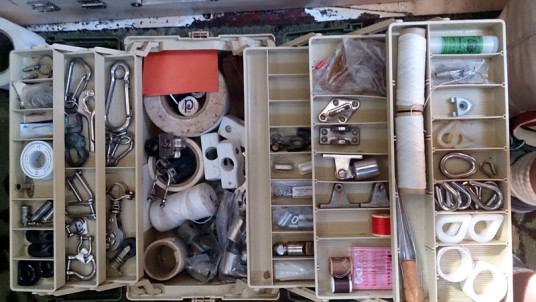 And if it’s electrical in nature… 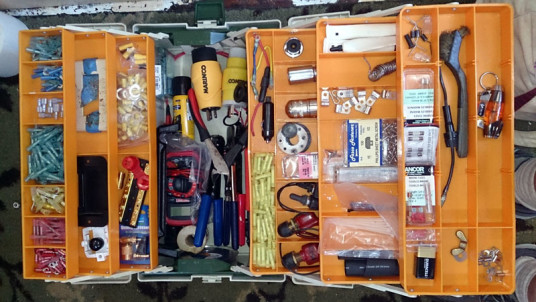 Meanwhile, it was Pride season, and I sold a bunch of books to happy queeros in Boston. 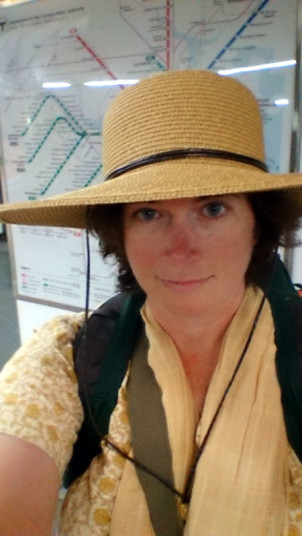 And with all that work going on, we still enjoyed sunsets like the one above and this one here.

And fucked together new recipes.  We’re calling this one Peach Buffins, because it’s one muffin pan, add butter, brown sugar, and peaches, then drop in some wet biscuit dough. Bake at 350, turn out on a baking sheet, and check this out. 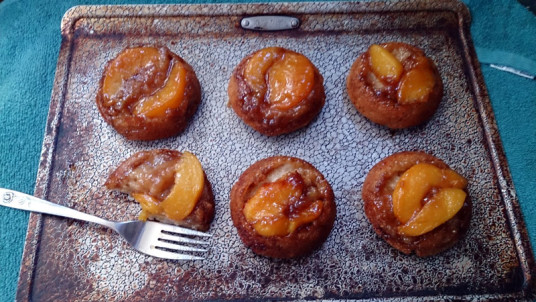 For the 4th, we fried some fresh fluke, caught the day before by a friend, whipped up some ravioli, put it on a plate, jumped out in the cockpit, and watched the fireworks almost directly overhead. The fireworks barge was a hundred yards off our port bow. 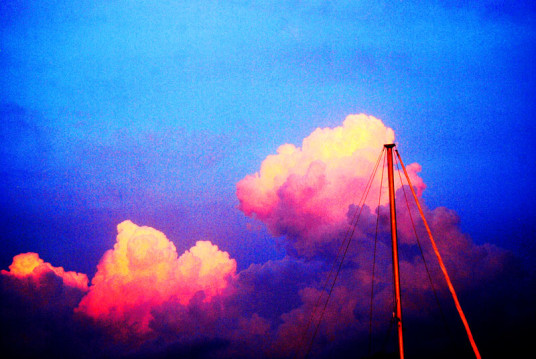 However, we had a very similar experience last year, right down to the female vocalist singing Fleetwood Mac covers at the party off our starboard quarter. 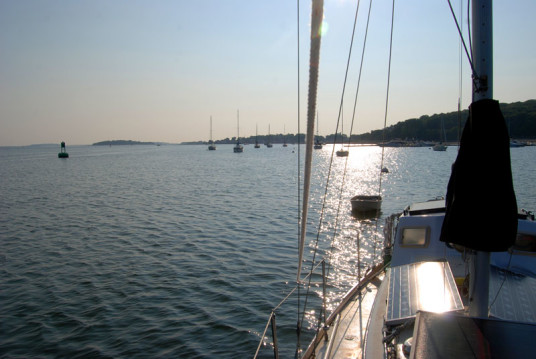 We dropped the mooring lines at 10:30am, so excited to be underway that we nixed the idea of stopping for water. We’ll fuel and water up in East Boston before heading Down East.

Glass water, still air, so we motored the first hour and a half out to the Sculpin Ledge Channel, between Long and Spectacle Islands. The wind picked up a touch, so we hung the laundry and broad reached with many a jibe to test our new running rigging. I spliced and lock stitched eyes in the jib sheets just yesterday and used a soft shackle I made a few days back (out of Samson Dyneema) to attach them to the jib clew. The splices keep us from having bowline knots hanging up on the shrouds when we tack. 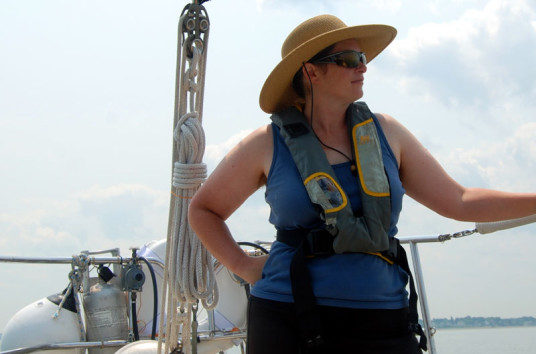 While Dena was rebuilding the storage lockers aboard the boat, I (James) was serving out my time during the busiest season of the marine hardware retail industry. Gas prices went down in March and increases at all levels were immediate. For the last four months, the store we worked in has ramped up to this past week of Christmas-stampede-style shopping calamity.

Marine sales is the hardest thing in the world for me to do. Knowing that this jack-off is going to be sharing the water with me, at least a little while before he runs aground. Hopefully I’ll be able to get the fuck out of the way of all the people I just sold millions of dollars of marine hardware to.

In the meantime, I was developing relationships with coworkers that were nothing short of profound. People that were interested in the same things I’m interested in, in different ways. That’s the only way I’m able to do it at all.  There’s an immense amount of respect from peers and customers. That’s strange, because I hate it so much.

It’s a bizarre thing, developing a few very special relationships with people and then having to tell them…I’m leaving here, probably forever. I’ve done that quite a few times now and it doesn’t get any easier. 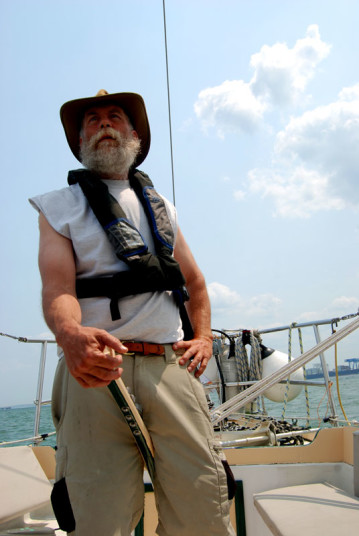