After our calamitous approach to Portland Harbor and subsequent safe anchorage, we decided to dedicate the following day to finding Ohana, the boat that gave us 5 gallons of diesel fuel and the jerry can it came in.

We’d refilled the can, so the next morning we loaded it into the dinghy and set off for the Portland waterfront. We’d anchored near our old spot, though, the one near the boat ramp at the East Promenade, meaning we were a long, long ways from the waterfront. Once we arrived at the marina Ohana had said they’d be going to, Portland Yacht Services, we tied up and went to the office.

To make a long story short, they weren’t there. Ohana wasn’t at any of the marinas up the Fore River and we know because we walked the entire 2 mile length of the town looking for them. Along the way, we also questioned the surly, helpful, and/or chatty marina owners and managers about the area for our guidebook edits.

We didn’t find Ohana, but we found another kind of family at Nomia, the local women-owned and operated sex toy shop. We were greeted by a gracious person who, surprise, surprise, crews for offshore voyages. If there is any such thing as “our people”, she’s it.

The row back was against the current and the wind, which had picked up considerably throughout the day. This is not my (James) favorite story to tell; it was a drag.

The next day, we walked and walked some more, another 4 miles, in order to get groceries. The East Promenade has a trail that leads through it, tying the waterfront-downtown area to the back bay. We used the trail to get to work back in the Equality Maine days and hadn’t been missing the stink of the local shit-factory.

You know – where they process all the stuff that disappears when you flush that toilet. The stuff we have to deal with more directly.

The row was no picnic, but not nearly as hard as the day before. On the other hand, as we rowed up we realized that the boat was broadside to the wind and in a strange position compared to the current. Also, the anchor rode was tight and the bridle was loose, meaning the bridle ring had slipped on the anchor rode.

Upon inspection, James saw the anchor rode leading directly to starboard from the area where prop sits in its aperture in the rudder. He thought the rode was caught around the prop, which would be way too much stress on that piece of equipment.

I (Dena) was in my bathing suit and dive mask, preparing to jump into the 60 degree water in 70 degree air with 20 knot wind(chill), by the time we blinked.

Fearing our prop shaft might bend, I wasted no time and put my body to the test. I jumped in downstream so I wouldn’t be swept into the boat – a miscalculation, since then I had to swim back to it right away and keep swimming to stay near it. I pulled myself along the anchor rode from the bow on back down the hull and, thankfully, not to the prop. It had gone all the way under the boat and was hung in the pivot point between the keel and the rudder.

James slacked the line from above decks and I tried to wrench it free. I had to go around to the up-current side so I wouldn’t waste my breath and strength just getting to the bottom of the boat. Once on the labor-saving side, I made several short dives getting it clear as much as I could, but I finally gave in to physics. I needed something to push against, and the hull was right there.

We haven’t hauled the boat in a while (*cough3years*) and the barnacles are pretty healthy down there. 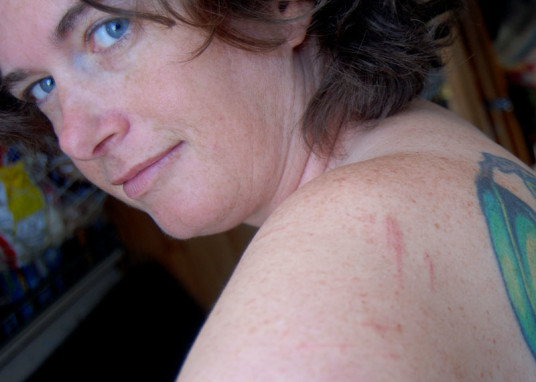 With the additional leverage, though, I got the rode free of the rudder and moved to the next task. Clean the body. James hydrogen peroxided the scrapes and I took care of the rest. 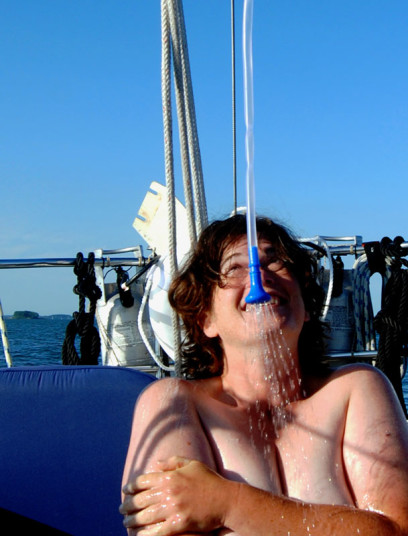 That’s the nozzle for our new solar shower – fill with water, leave in the sun, and take a shower. I like simple.

Today, we decided to use the calm and warm sunshine to slap a coat of paint on our trunkhouse and the fantail. So we sanded. 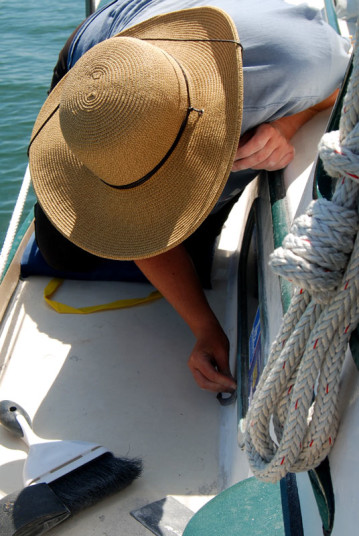 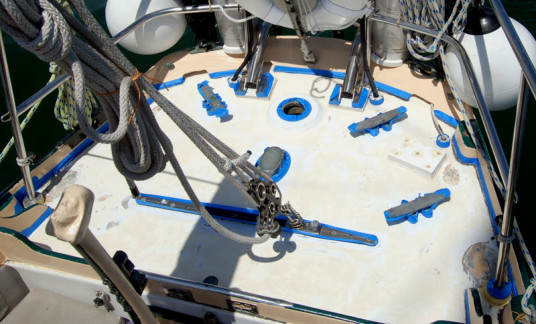 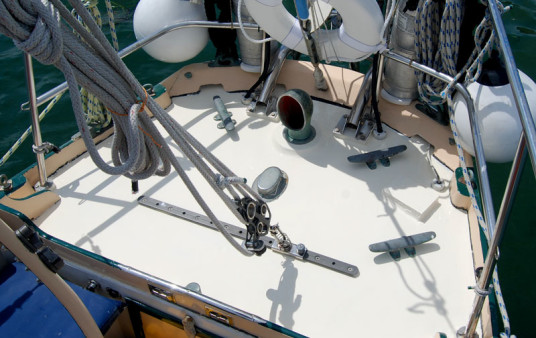 And painted some more. 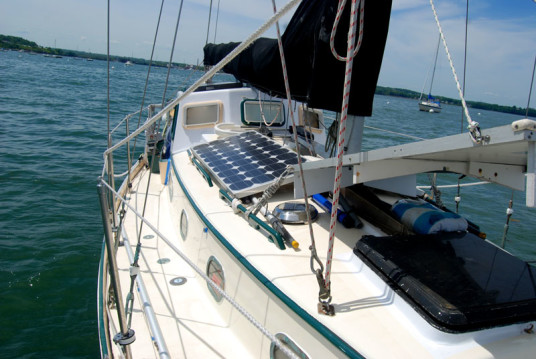 From the very beginning of our travels, the boats and crews that have impressed us the most have been works in progress. Ship-shape, but not always absolutely perfect in every detail. A crew that pulls into a port and immediately breaks out the project tools and gets to work seems the happiest doing what they’re doing.

As long ago as Newport, OR, a Tayana 34 pulled up while we were recuperating from a 3-day jaunt from Neah Bay, WA. The couple aboard stayed 2 days and put on 3 coats of varnish. They weren’t headed anywhere that could be called home base, being as though they were on their 3rd circumnavigation.

Oh. Right. That means everything has to be done underway.

It’s a different kind of cruising from the type where people prep the boat to perfection, then leave and consider themselves on vacation, and return with a beat-up boat that will need a lot of work before going out again.

Since we live aboard, live underway, we have to work on the boat as we travel. The crews who’ve been the most profound examples to us aren’t on vacation. They’re living their lives. We didn’t make our boat perfectly beautiful before we left – we made it completely functional, knowing that the best time to paint is on a beautiful, calm, warm summer day at anchor.