Here we are, Mount Desert Island. I (Dena) am mildly irritated by the name, because Desert is pronounced in a French style (dessert) but then why wouldn’t it be Mont? I feel tricked. 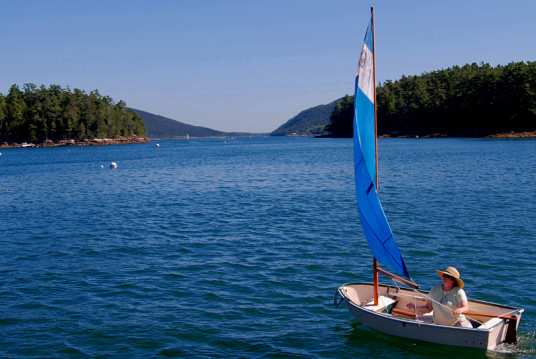 Really, it’s just that I’ve been saying it wrong and I have an aversion to exhibiting my ignorance.

So we snapped! popped! the toerail and tossed off the jib sheet and pulled the jib in and tacked under main and finally anchored in Somes Harbor. Quite a lovely place, and plenty of people know about it. We knew a blow was coming through and we dropped the anchor in 20′ at low water and the tide is almost 12′ so 7-to-1 at 32′ is 224′ and we rounded up to 230′ of chain and rope rode.

No one else used that math.

We ended up surrounded by boats, an ever-changing group, mostly anchored with about 100′ of chain. This means that any good blow pulls that chain off the bottom, creating a broader and broader angle all the way to the anchor, which is designed to break out of the bottom when the angle gets too broad.

The first night we were in Somes Harbor, a boat dragged its anchor. The guy pulled it up and put it back down, way too close to us for comfort, but dragged it again until the boat behind us pulled out their air horn and blew it at him over and over.

As he pulled up next to us again, he was screaming his frustration in blue language. While that sort of thing doesn’t offend me like it does some, it also fails to instill confidence in the coping mechanisms of the screamer.

While I (James) was laughing my fucking ass off.  The dude was in a Huntajeaunabenelina with a brand new Rocna anchor (supposedly “Next-Gen” and fool-proof) that was so obviously too small for the size of boat that he had. And really, the only problem was that he didn’t have enough chain out.

When he settled back again, still dumping his chain in one go and then dragging it across the bottom, the entire anchorage decided we’d all just go to bed and hope it all worked out.

The other thing that happens when we have 230′ out and the boats around us have 100′ is that they underestimate how far we will travel when the wind changes. We move (potentially) in a circle with a radius of 230′. For the most part, similar types of boats will move the same direction at the same time because they’re under the same forces, so we don’t necessarily need the entire circle to be clear.

A boat showed up and anchored pretty near us, so we rowed over and told them in a friendly way that we had more than twice the scope they did (twice as much chain and rope out). They were just relieved we weren’t saying get the hell out of there (the first boat there has the right of stay) and promised to keep an eye out. The next morning, with no wind to push us all the same direction, we drifted very near their bow, but they were leaving anyway so we all decided to say fuck it.

The next evening, though, another boat showed up and anchored very near us. I mean they put their anchor within 50′ of ours. Pushing it, for serious.

Sure enough, when I (Dena) needed to pee in the night, I was sleepily puzzled by the streetlight that shone in our forepeak porthole. After flushing (pretty phosphorescence), I was awake enough to realize that we were in the middle of a very dark harbor with no streetlights and that there was a problem.

I looked out the side portlight and didn’t see the boat that worried me. Then I went back to the forepeak and, lo and behold, there was a bright bright light right over our bow.

James jumped up and we struggled into clothing and James beat me and I jumped into the cockpit as James rushed to the bow. Their dinghy was millimeters from our boat and James didn’t even have to lean over to push their davits to separate the boats while as gently as possible trying to wake them up…

“Hello, good morning your boat is about to fucking hit another boat!”

The windless night promised to bring us back together, so I (James) jumped into Tinker and rowed us out of harms way, meaning we tied the dink to the big boat and I rowed us away. I mean it’s great to be half awake rowing in a little boat with our 15 ton home bearing down on top of me in the middle of the fucking night. No really, it was great, kind of like riding a bike in the rain blowing by a thick angry traffic jam. When we anchor, we not only “over scope” we put the hook on the bottom, we pay out 2-to-1 and then backdown on it until it sets and then we back away while putting out more chain until we have our “comfort-scope” payed out, 5-to-1 at least but a good night’s sleep is usually achieved at a minimum of 7-to-1 (that means 7 feet of chain to every one foot of depth AT HIGH TIDE people not at low tide with another 12 feet of depth coming within the next 6 hours, come on, people!). And check this out – we’ve never seen anyone else do this in 16 years! We’ve only slipped once, and that was in 40 knot winds…sustained, with gusts even higher.

So I rowed us away from the sleepy but by then awake-and-in-their-cockpit other boat.

It wasn’t that big of a deal really, just another one of those moments of sheer terror that we have been writing about so much of lately.

Of course, we got no pictures of it. Imagine this, but in the dark and with the boats tied together. 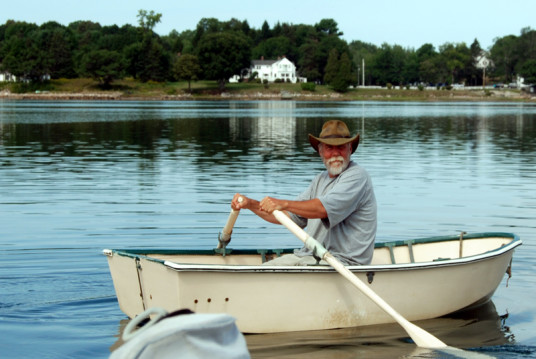