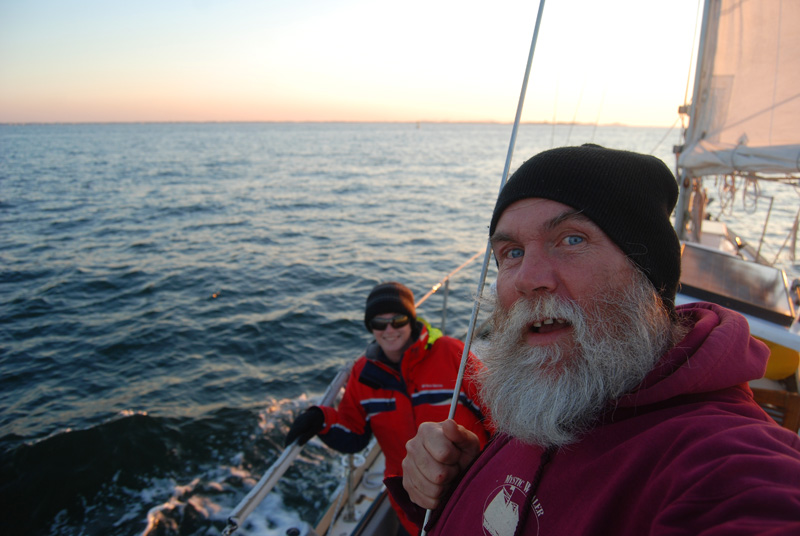 Thanksgiving eased past with a good day and a great meal. 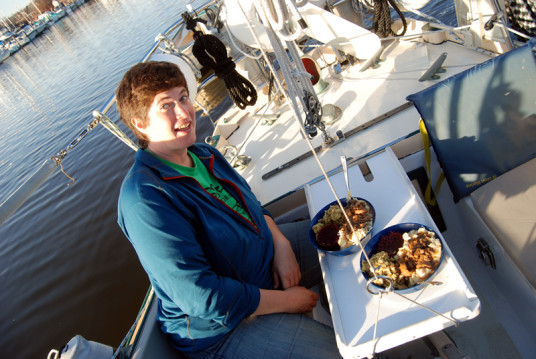 With inclement weather patterns in full swing, we pulled the hook from the muck of Baltimore’s inner harbor on a dreary day and headed south for the winter. 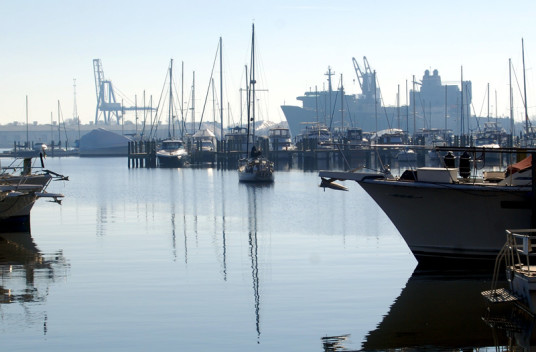 The wind was about as “light and variable” as you can get coming out of the Patapsco so we made a short day of it and anchored at the mouth of the Magothy (Maggotty was the original name, ick!) River just as the sun dipped into the grayness of a calm starless night.

The following day we sailed double reefed with a full genoa all the way to Kent Island and stuck the ground tackle in some sand just off the coast in a nice little protected hook of the island.

Then the weather kicked in… 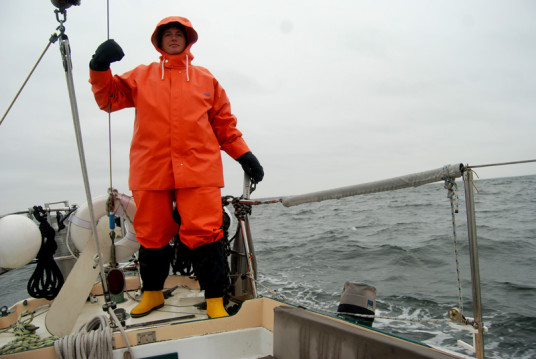 Fresh winds, gray skies and choppy seas were enough inspiration to don our foulies and motor-sail (jib only) all the way to our next anchorage, Solomons, MD. 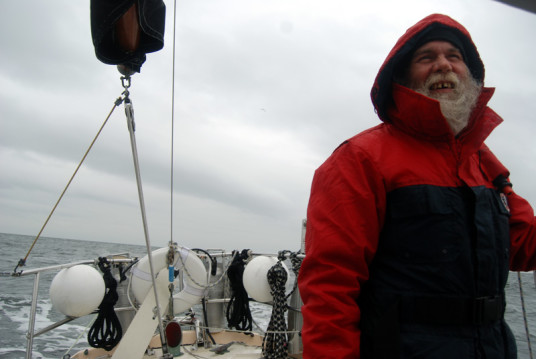 We had a few things to do- Dena’s birthday, provisioning, propane etc… Dena’s BIRTHDAY!!!

We went to the local Maritime Museum, had a great meal and then scammed the local Holiday Inn.

We talked to the hotel marina manager after checking the listing for the place in Active Captain and the guy was a total dick. A.C. said you could get a pass-card for the showers with your $2.00 dingy dock fee and that’s the only reason we anchored that close to the Holiday Inn. Well, when we asked the marina manager for a key he just shook his head and told us no. Okay, he wasn’t a 100% dick, he did wave the $2.00 dingy dock fee, thanks bud!

A couple in a Huntejunabentalina were taking off just as we were pulling in so I felt around in the self-pay envelope on the marina office door (because we’re supposed to do all the work, here) and sure enough, they’d left their key card.

When we tried it and got the green light on the door, we cheered. They had full-on locker rooms and the attached gym had a sauna…and we were definitely going to take full advantage. The other amenity was laundry, so we washed and dried our clothes and ourselves, using all that time to wring the absolute best out of the facility. Score!

The rain kept us an extra day, then a windstorm made it two. Propane and provisioning went fine (a mile walk instead of the three miles we’d expected), so we got rid of the rain and got underway again. 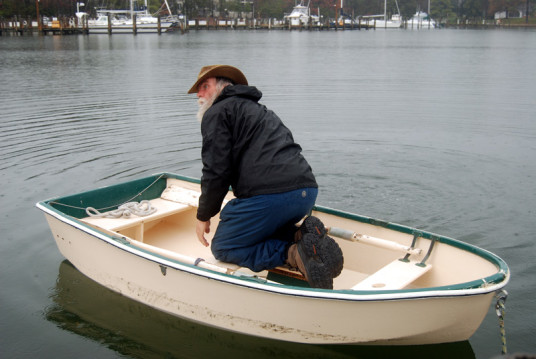 Leaving Solomons was easy, but when we decided to kill the engine, we discovered that we’d really killed the engine. 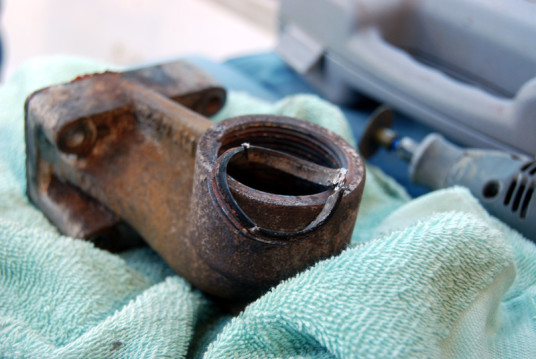 The picture above shows the elbow from the manifold. It carries dry exhaust (the smelly stuff) up from the engine to the mixing elbow that adds the cooling seawater. It goes up about 8 inches through what should be a single pipe, but had been frankensteined into a mess by a previous owner. It was ugly but nothing to worry about, or so we thought.

The pipe broke right at the manifold elbow, necessitating a Dremel-on-inverter and mallet-on-hammer method of removing the broken off threaded portion. That’s the deformed ring in the picture up there. We managed to clean up the remaining threads and get the pipe deep enough to run the engine a bit, but we didn’t trust it. 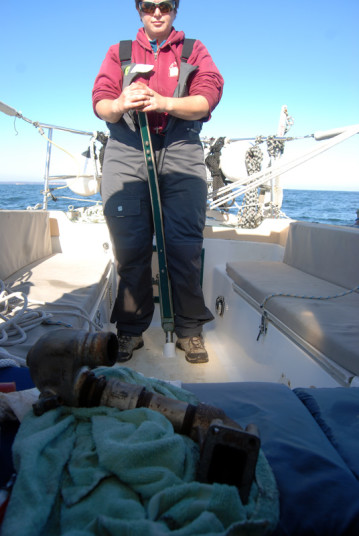 That meant we were back to sailing like the hundreds of pounds of iron under the companionway were there for ballast. Yep, another engine problem.

Without the trust that the repair would hold over the long term, we bit the bullet and sailed directly from Solomons to Deltaville, VA. Another unexpected overnight trip for us, but really? It was lovely.

The wind was too light to make good time, but strong enough to let us maintain steerageway. The shifts drifted by just like the lights and we started the engine on the approach…gingerly. We ran it lightly and made the big abrupt turns in order to get into Fishing Bay, where we anchored with great relief.

We slept off the overnight watch and recovered from the general high level of tension. We took the next day…a lovely day…to get to Rebel Marina. 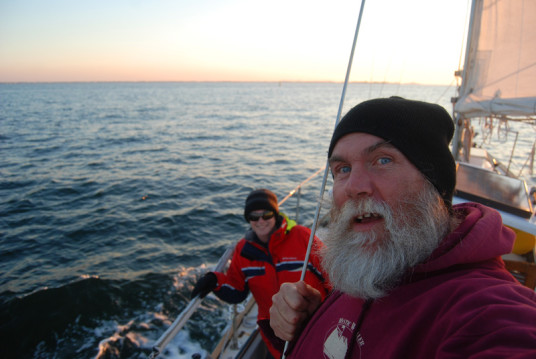 We’re back where we started…on this boat, at least. When we arrived in Norfolk, VA, in January of 2009, the culture-shock made everything surreal. We got a cheap motel room and ate whatever didn’t need to be heated up, but we desperately wanted to get aboard a boat and be home.

Norfolk was our destination right out of India because of a boat named Nomad. We bought that boat within the week and moved aboard immediately. We’ve done more work than…well, read the older posts. It’s almost all there.

This boat hasn’t just forced us to hone and polish our marine maintenance skills; it has taken us thousands of miles to glorious places.

We’re back, but only on the way to more adventures. Here we go. 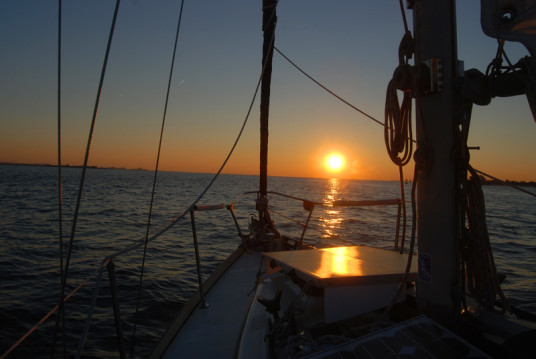