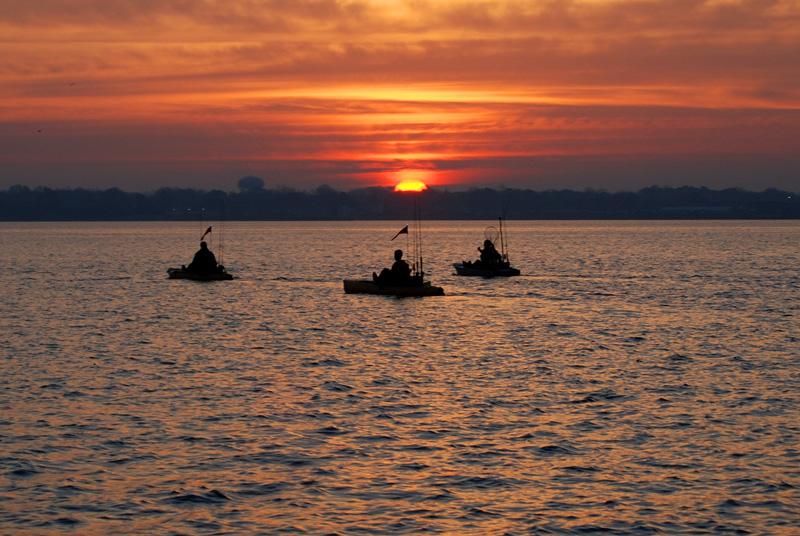 Well, we’ve done it again. Gone so long without a blog post that a real meaty update would be ridiculously long. So here are the bones, shreds of meat attached where necessary. 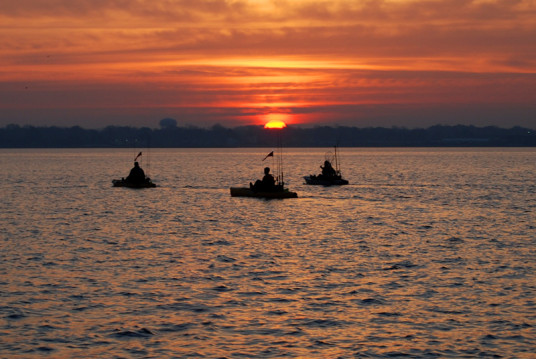 Leaving Rebel Marina at first light proved we weren’t the only crazy people out on the water but once again, we were the only people crazy enough to be sailing south in December. 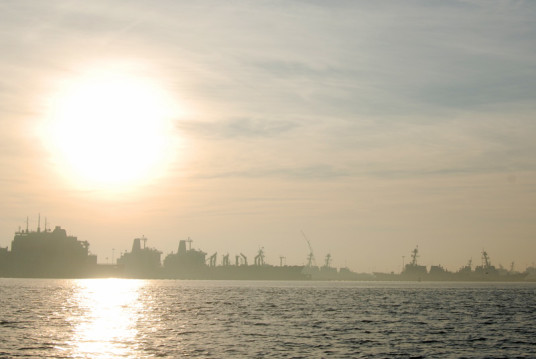 Of course, there’s crazy and then there’s military.

We motored down the Elizabeth River and down to the hard-to-starboard turn into Deep Creek. Deep Creek Lock doesn’t open but 4 times a day, so we anchored in glass (shallow water, little rode) for a brief time. 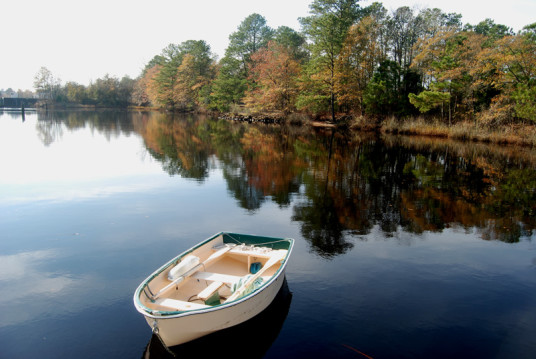 Once inside, we tended the lines as the water rose 8 feet from the river level. 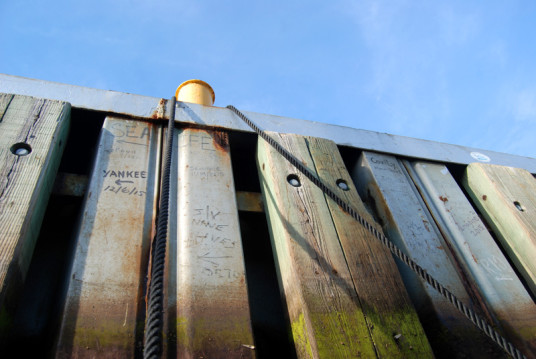 So we slowly but surely entered the Dismal Swamp Canal, less horrible for us than for those who dug it out of the swampland. We visited the Great Dismal Swamp a couple years ago on my (James’) birthday and discovered that most of the canal was hand-dug by slaves in the 1830’s but later used as a thoroughfare for the Underground Railroad. 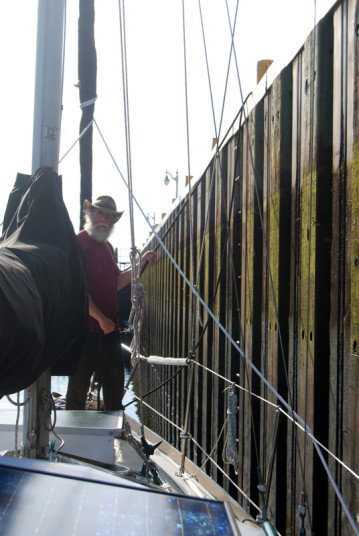 Then it was motoring on glass for miles and miles. 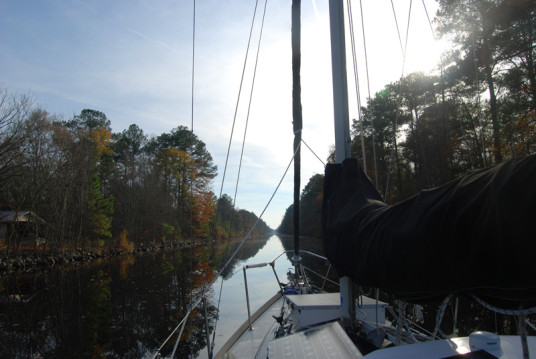 And such hard work. 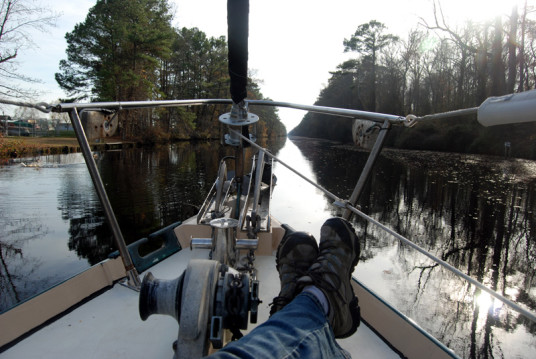 Though all looks calm, the water is brown with tannic acid. 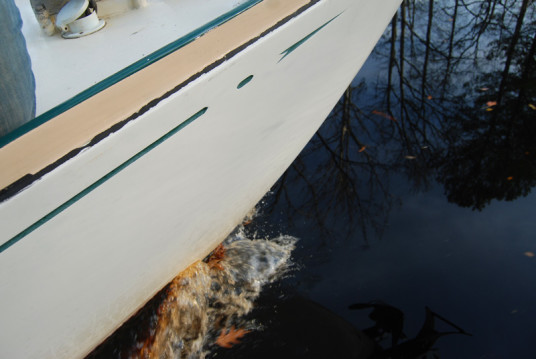 I’d like to blame the troubles we had on the acidic water, but I think it might be the fact that the belts on our engine are, at the very least, 7 years old. Pretty good, considering how much we’ve used them.

I (Dena) was at the helm and James started back to the cockpit from his seat on the bow. Suddenly, the sound of the exhaust changed from a glug to a cough. A quick glance confirmed no water was coming out with the dry exhaust. So…yep, moments later, the over-temperature alarm buzzed so we quickly finished the motor and drifted.

A quarter of a mile up the ramrod straight passage that is the Dismal Swamp Canal, a wharf gleamed.

I (Dena) tried to keep our momentum up by sculling with the rudder, but it’s not really for that. James did the hero’s work by rowing us to the closest dock, about a quarter mile away at Douglas Road Landing. 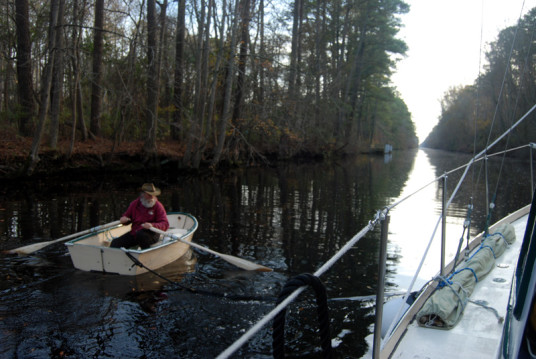 After making fast on the dock it didn’t take long to find the problem and surprisingly, not much longer to find the solution. Traditionally the worst part of any emergency project is diagnosis but in this case the problem revealed itself rather quickly. I (James) opened up the bilge hatch and the snapped belt fell right into my hands. We had two extra water pump belts and the repair took all of five minutes. 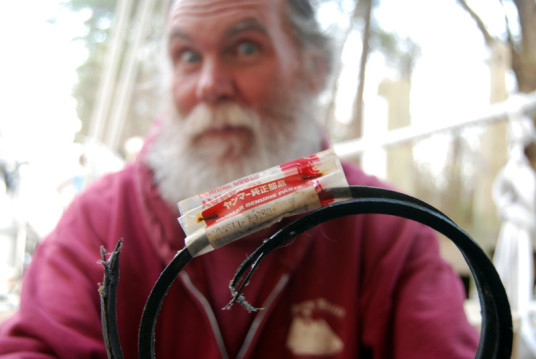 Fixed and happy, we took a walk along the nature trail, getting a good look at our boat on glass tannic-acid-water, or “Black Water” in the process. 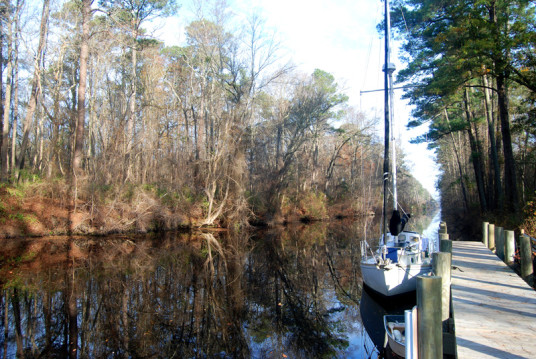 Next day, we were off like nothing had ever happened. Best of all, we weren’t even behind schedule. We’d planned to stop a couple miles up anyway! 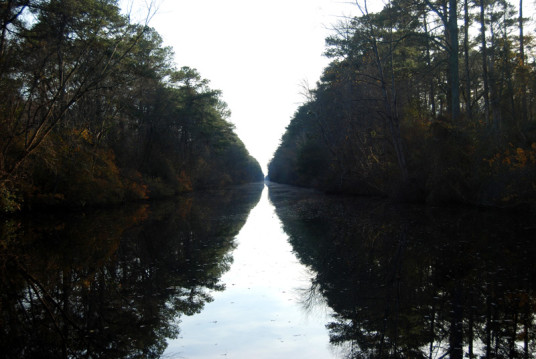 What a strange place. 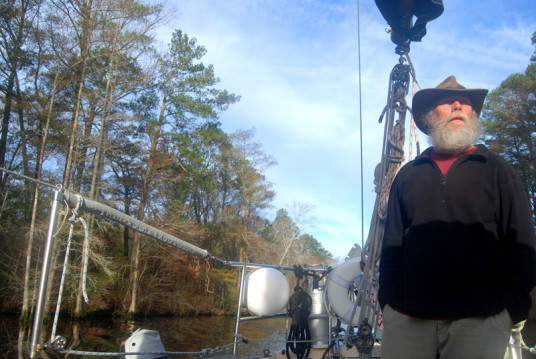 And then we left the Dismal Swamp for the river. 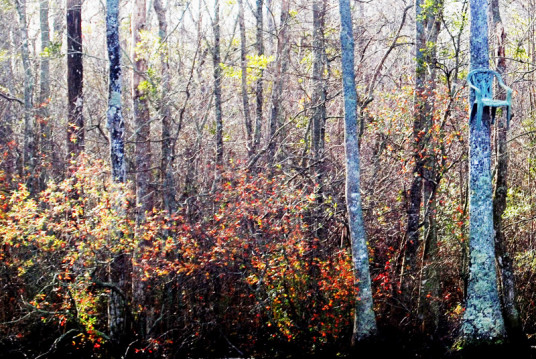 Oh, so very strange… Yes, that’s a plastic chair nailed to a tree in the upper right hand of the shot above! 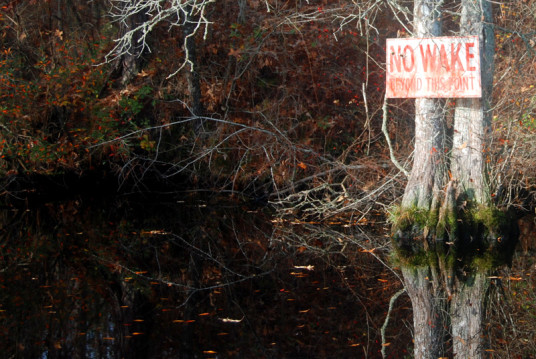 People who grow up around here must think that trees are supposed to grow out of the water. This is exceedingly strange to me (Dena).

After a couple of rainy and windy days in Elizabeth City, we crossed the Albemarle Sound. 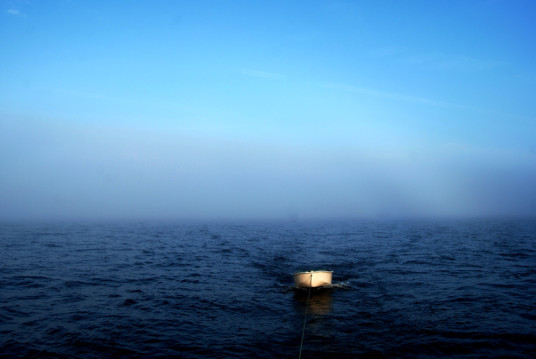 After not even taking off the sail covers, we did what we could to be blow-boaters again (or rag-baggers as they say down south). 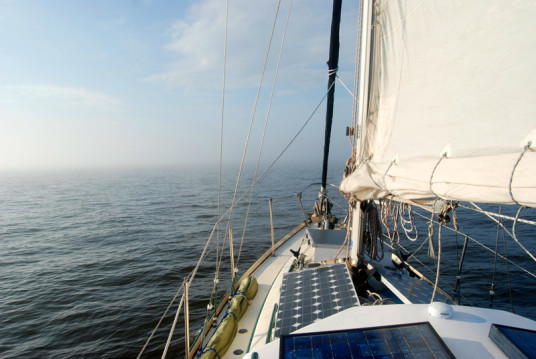 The town of Columbia is up the Scuppernong River, a body of water no less strange to us than everything we’d seen since leaving the Chesapeake. 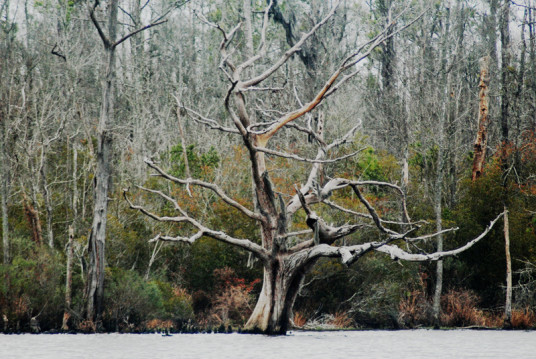 We were doing some real river navigation – winding, bending river. 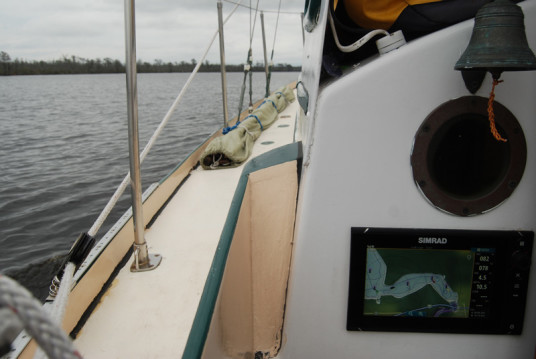 And never a good moment to stop paying attention. 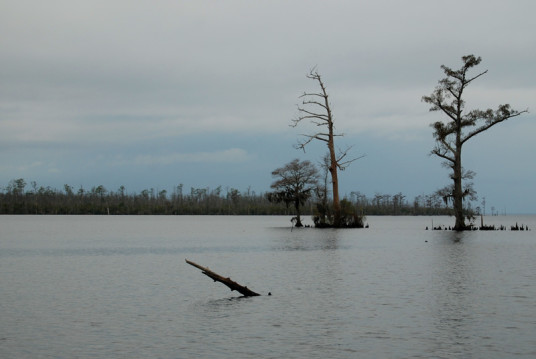 And then we were safely snugged into the free municipal dock in Columbia. We were met on the dock by the town manager and the mayor of the town who is a sailor from way back and was very much into hearing some of the stories from our adventures so far. 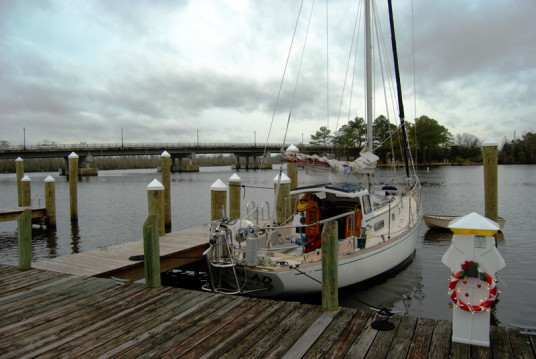 Several wicked weather days later, our nerves were shot and we had to get off the dock. The rough ride while tied up is brutal compared to being at anchor. We promised each other we’d anchor as often as possible from here on out. 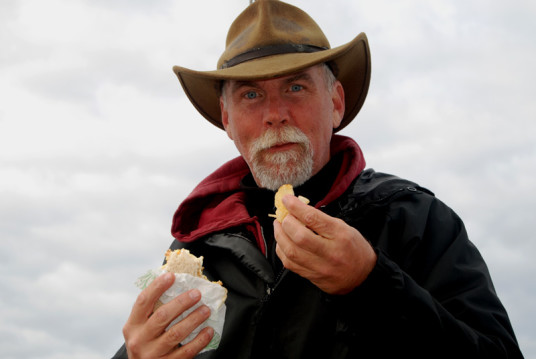 Also, we had access to some free hot water so I (James) shaved her and she shaved me in anticipation for the coming southerly environs. After two days of dockage we really just wanted to move on. So we sailed to the Alligator River, bashing against a headwind the whole way, what a fucking drag that was, then over the north end of Roanoke Island on glass and…what the hell? 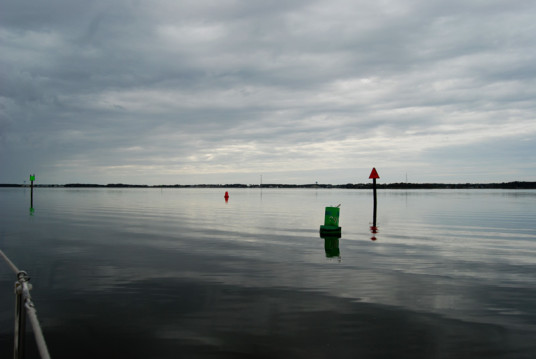 Where the Manteo channel splits off, there are no fewer than six markers in a very small area, red and green mixed in a glorious mess. The key is that they’re all numbered, so you can know the main channel from the side channel…of course, you can’t see that until you’re pretty much on top of them, and they mark places you don’t want to be, so…

And then we got into Manteo’s harbor, put the anchor down, and sucked the dinghy’s painter into the prop.

The super-duper floating dinghy painter line had stopped floating. It’s nylon over polypropylene, and I suspect that the floating poly was disintegrated by the Baltimore stew. That’s when we first noticed it had stopped sitting right on top of the water.

Pulling and untwisting didn’t get the line loose, so it was time for drastic measures. 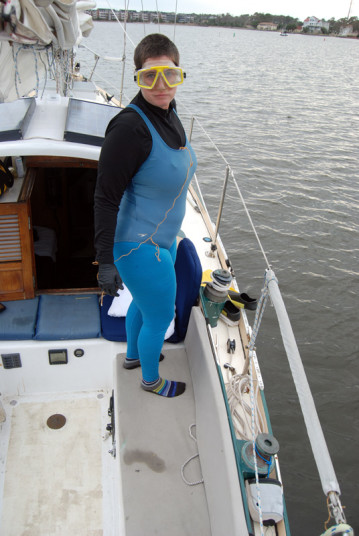 That is smartwool, neck to toe, and the line went to the knife in my neckline. Yep. I went swimming.

Just inside the Outer Banks.

And I fixed it. I didn’t have to cut the line, just dove a few dozen times to unwrap it. The few that were well stuck gave way when I planted my feet on the hull and pulled hard.

Then I got the fuck out of there. 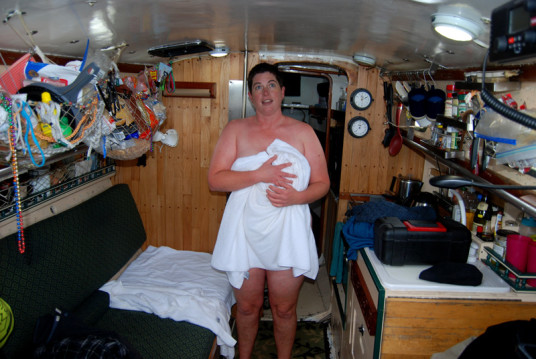 My skin was well-chilled, but my heart was pumping warm blood everywhere it needed to go. Strangely, in Maine I’d gotten aches in my fingers while swimming, but this time, nothing of the sort. On the other hand, I really think this water was warmer, in December, than the Maine water was in August.

So now we’re in Manteo, NC, where we will most likely be until the town comes to life again after the christian-solstice-abduction holiday…

In 1992 I (James) wrote a song called “Gone to Croatan” and recorded it with the band Tchkung, here’s the youtube link…

…That’s me (James) “singing”…23 years before I ever even saw this place.