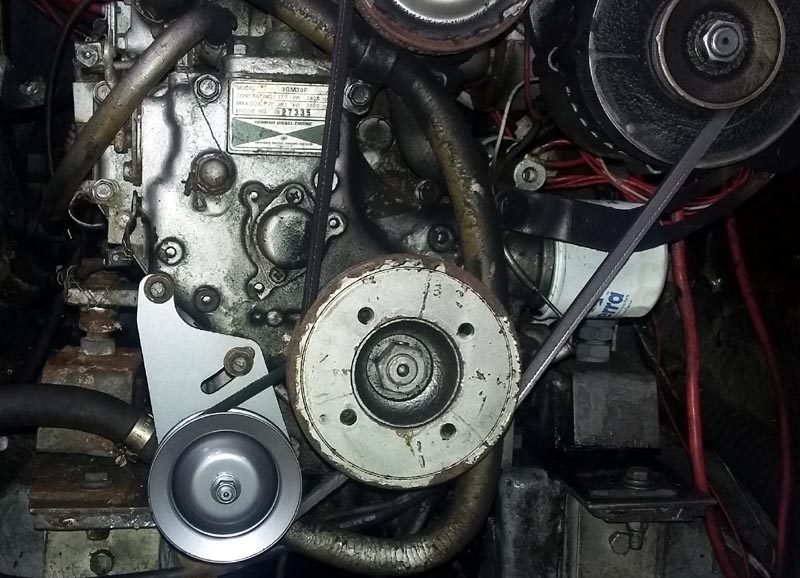 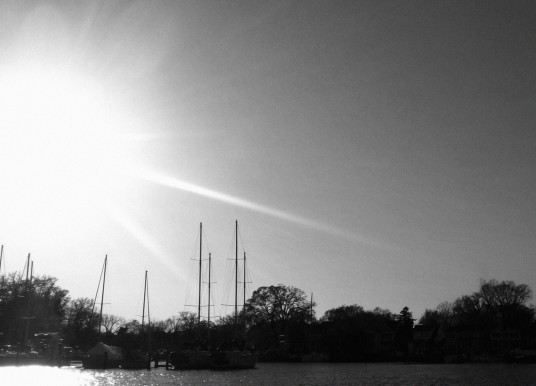 So we up-n-decided to pull up anchor and head-on in to Dena’s Marina as soon as we both got off work!

(which is working out famously, BTW)

We rowed out and as soon as we got aboard Dena went forward to ready the anchor bridle while I started the engine, turned on the electronics and readied the dock lines. After getting the motor running Dena came back to the cockpit and very hurriedly asked if I could hear water coming out of the exhaust. I stuck my head over the side as Dena went aft to answer that all important question for herself… Nope, no cooling water exiting the transom! Fuck, fuck, fuck! Before shutting her down I went down below, opened up the view hatch in the engine box and very quickly saw, what I thought was, the problem.

I pulled apart the engine box, got out the big screwdriver and the 12mm socket and went to work tightening the belt. After I got it all secured Dena started her up and I watched as that little raw water pump quite literally destroyed itself! The pulley just tore the internal bearings to dust in seconds after the engine started running again.

Dena shut her down again and went to work trying to find that god damn engine part. 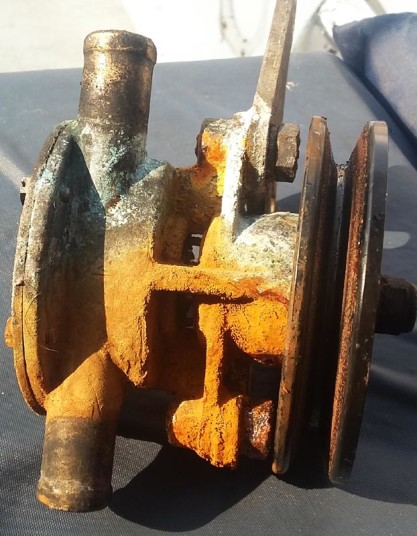 We made a fancy plan on how we would get up extra early (we’ve been getting up at 5am) so we could work out and shower and still get to the marina (across Back Creek, which means the easiest and fastest trip would be by dinghy) by 8am and get me (Dena) to my short-timer job by 8:30. I had just finished up on the rowing machine when James popped up with a bright idea.

Why not use our new connections to try and get a better deal? I was all over that.

When it comes down to it, though, Yanmar deals are not to be had on the fly. Those parts are imported, distributed, and priced-up in a way that makes their profit margin feel like a hot shave with a straight razor…almost too close for comfort.

So our boat continued to sit at anchor without an engine – an uncomfortable situation, especially once the harbormaster boat paid us a visit. As nice as the young man was, we’re more-than-once-bitten by the authorities and I couldn’t help but run the hauling anchor under sail possibilities through my mind.

The next day, James and I went to the gym in the rain. When we got out, it was pouring so heavily that we gave it 5 minutes to slack off…which it didn’t. I shrugged and rode to work. James shrugged and rode back to the dinghy.

Once in Tinker, the row from the dinghy wall at the end of 6th Street, past our boat, and across to the Bert Jabin Boatyard is about a quarter of a mile. Compared to some of our epic rowing adventures of the last year, it really didn’t seem like that big of a deal. But as I (James) started rowing, it seemed like with each stroke of the oars, the rain got even harder. By the time I got mid-channel, visibility was less than a quarter of a mile. I couldn’t see the boat or the marina and Tinker was filling up quick. I had to stop in the middle of the channel to bail because it felt like she was going to sink any second.

When the dinghy gets heavy with water, stroking with the oars makes the water surge with a slow roll. The water’s inertia can shift enough weight to flip a small boat.

So I bailed and bailed but as I did it seemed as though I couldn’t bail fast enough to keep up with the rain so I decided to continue my row until I got to the Bert Jabin docks. By the time I got to the docks the little boat was so full that I had to bail again just to get out of the boat and not sink her.

I waded my way through that immense marina complex and finally found the parts building but by the time I got there I was soaked through-and-through. My shoes squeaked and squished across their perfectly polished floor and I was shivering visibly by the time the parts guy took my order for the new pump… I paid and left.

The rain didn’t let up the whole time I was sloshing my way through the marina yard so the little boat was almost sunk by the time I got back. I had to lay on the dock and bail for about ten minutes before I could get Tinker dry enough just to get in.

I rowed back to the big boat stopping twice to bail and by this time I felt as though this story was getting a kind of Mel Brooks comedic edge to it. The rain got harder!

It wouldn’t hurt to mention that it’s been raining for three weeks now so everything’s already soaked and this just seemed kind of vengeful.

Ultimately I got back to the boat, jumped aboard, and about five minutes later had the new pump installed and the engine was running perfectly, pumping water like nothing was ever wrong. 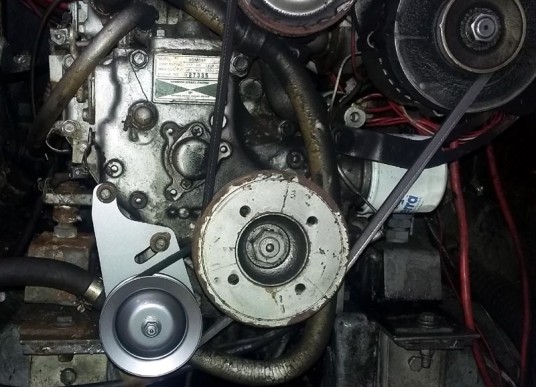 I ran her for about an hour, cranked up the heater, dried off the best I could and passed out cold on the main-cabin settee. About a half hour later we ran out of propane for the heater!

I had plenty of dry Smartwool so I piled on the layers, opened up my Kindle and read my way through some Azimov until Dena called me to come pick her up at the public landing. Believe it or not the rain slowed to a trickle by the time we got back to the boat so we moved to Dena’s Marina. 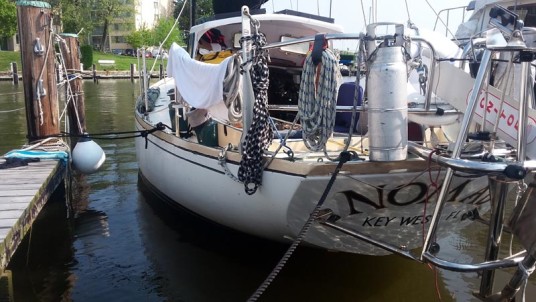 …And then the sun came out!