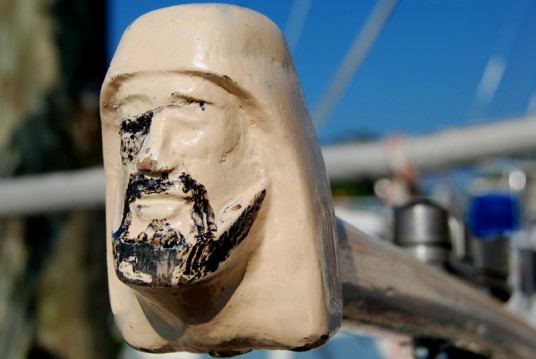 Nomad, from the Greek, Nomas meaning, “a member of a people having no permanent abode, and who travel from place to place to find fresh pasture for their livestock…”

Not really apropos to our way of life being as though we do have a permanent abode, we have no livestock to feed in any pasture what-so-ever, it’s not only not apropos, it’s completely inappropriate!

But, you sure do see a whole lot of boats named Nomad out there, hell, there’s almost one at every dock, I (James) think that’s a little weird.

When we first moved aboard S/V Nomad at the beginning of 2009 we did it with every intention of changing her name but the painted lettering on her pretty little heart-shaped transom  put us off and of course there was the rapidly lengthening to-do list that put a re-naming party on the way-way back burner.

By the time we got to Baltimore in December of that same year we had a pretty good idea of what it was we were doing with this boat and being nomadic wasn’t it. At that point in our lives we were most definitely itinerant with nary a pasture in sight. We’d sailed this boat in snow storms with ice crunching against her hull  to get us to a job, Nomad, not so much.

But Itinerant didn’t really ring my bell either. The WIKI definition of Itinerant is freaking cool as shit and describes us and our adventures perfectly, but the word itself didn’t jump out at me as being anything but, well, small.

Our friend Kate told Dena that she thought the name Intrepid was perfect for us and our boat and I agree but I don’t think she knows how many boats are out there, as I write this, sinking at the dock, named Intrepid. It’s true, not so much on the east side but the left coast seems to have more than their share of dead Intrepids taking up T-heads. Sad really…

Anyway we went sailing one night and on our way out Dena, who was at the helm had to make an emergency hard-to-port. The tiller snapped off in her hands and she was tossed by momentum face first to the other side of the cockpit. I was about midships when it happened so I jumped down in the cockpit took the remains of the steering mechanism in both hands as Dena righted herself. She was uninjured so she took up the dock lines and rigged us for a slow approach back to our slip while I steered us back to the dock with Stumpy-the-Tiller in one hand and my 8-ball throttle in the other.

We put the spare emergency-tiller on and continued our sailing adventure 10 minutes later.

That tiller, as far as we know was hand carved by the original owner of the boat. I don’t know when that was but I’m thinking it was about 1963. The (totally unreliable source) guy who sold us the boat told me that he, the first owner, carved the figure head, sitting by his fire place over the winter after he ordered the boat for delivery, it was the very first thing the proud new owner-guy installed… It was a perfect racist stereo type, straight out of the mind of a rich white guy from up-state Michigan, of a desert roaming… wait for it… Nomad. 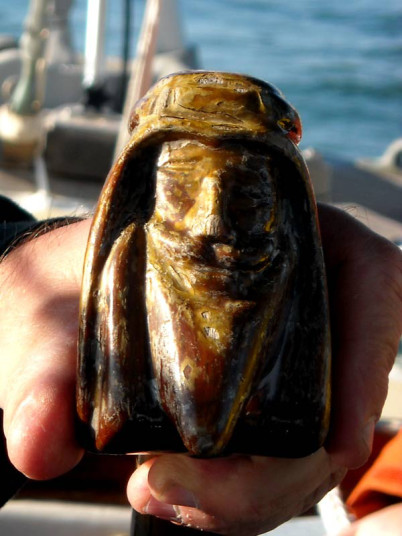 It drove us nuts from day one! Dena would look at it when I was at the helm, sailing along without a nomadic thought in my head, and just start seething,

I hate that thing!

I’m going to try and carve some of the racist bullshit out of our figurehead!

So in 2011 Dena sanded, carved, epoxied, painted and blogged the fuck out of that tiller but it still didn’t quite let the Nomad free, as a matter of fact, my friend in Cambridge, Mass told me it looked like “Beige Darth Vader” and offered to paint it black for us.

Deep down I didn’t want to, but I declined my friends offer.

…not a bad name for a band though, hmmm.

About two weeks before our tiller-explosion I sharpied the beard and eye patch on him just to see if Dena would notice. Nope, like me, she has long since stopped looking at the old figurehead so right before we left the dock on our adventure I pointed it out to her. We  both laughed at him and off we went.

It has been proved in a US court of law (if you believe any of that bullshit) that boats are legally more than the sum of their parts, hmmm…

Anyway, I went in to work the following Monday with the above heroic sailing adventure story in tow and my boss gave me a beautiful, brand new, hand made, laminated teak and holly tiller sans the Bearded Nomadic, Beige Darth Vader figurehead.

Check it out, a happy ending!