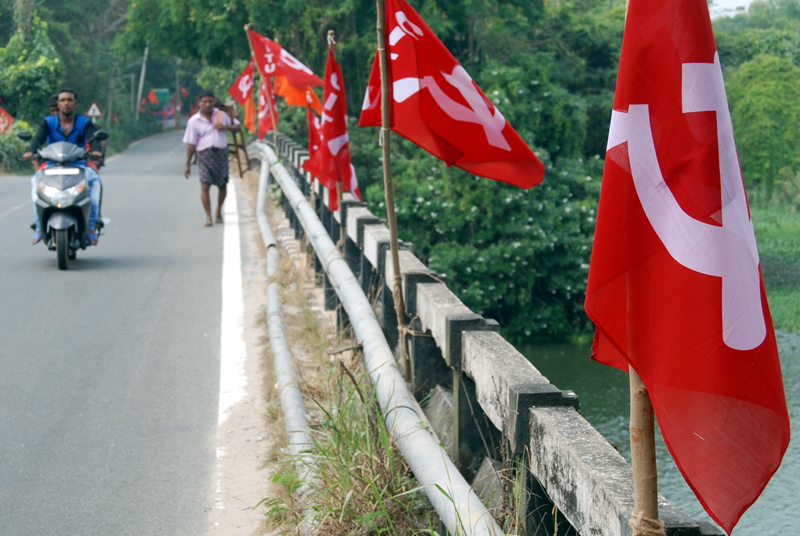 James and I ride up to Ulloor or Medical College or Pattom fairly frequently. One of our favorite thali lunches (Sree Gauri Nivas, pure veg and de-lish-us) is across the street from the Medical College entrance and there are grocers in the area.

At the end of the Ulloor-Akkulam Road, we can turn left-then-right (on the left side of the road, remember) to go to Kesavasadapuram. That takes us to the bike shop, a couple banks that’ll give us small bills for the Rs. 2000 bills the ATM spits out, and some other places we don’t need much from.

Alternately, we can get in the right turn lane and wait for the light. When the light turns green, it has already turned red for the crossing traffic, as is customary at intersections with lights. I’ve pretty much gotten used to the fact that I can’t stand there at my green light and wait for everyone to stop running the red light. The folks in the crossing traffic continue to come along against their red light until the green-light traffic gets their butts in gear and cross the empty lanes between. Then the red-light traffic stops to allow the green-light traffic their right of way.

And you know what? It’s terrifically efficient. So is bunching up at lights in a snarled mass of cars, trucks, bikes, buses, scooters, motorcycles, and auto-rickshaws. Anyone who’s slow off the line doesn’t cause a whole segment of the population to miss the green light, and for the most part, it’s less a snarl than a coil (a messy one, like a DNA molecule), ready to string out to fit the amount of road ahead of it.

I keep seeing these kinds of things and I’m struck by both my discomfort (spurts of terror are rare) and my admiration for how many people can move on a single road.

US roads are so empty, in the main, that many intersection lights have a built-in double red period. They pad the safety margin between someone going east and someone going north by putting a three-second delay on the new green lighting up. Terribly inefficient if a hundred thousand people may stop at that light in a day; totally acceptable if the number hovers closer to the single or double digits. (Irritating either way.)

It’s not just traffic, though, and that’s what got me thinking in terms of tolerances built into the system. Of safety margins and efficiencies.

All this to say that the exact balances considered acceptable will differ situationally, and anything situational will be affected by culture.

It’s the cement to gravel ratio in concrete. It’s the way people cook and serve food. It’s the willingness of a person to invite a stranger to their house. It’s how sequestered folks are from their waste materials. It’s all over industry and construction and everyday individual choices.

India’s culture aggressively seeks efficiency and looks critically at safety margins. The US’s culture prizes safety margins and tries to achieve efficiency as well. I see it in a thousand things, writ small and large, and the better I see it, the less attached I am to one particular way in all things.

New tool: a critical third perspective on issues of safety and efficiency created by combining the two that I know best. Skewed, inevitably, by knowing one better than the other, but not necessarily in that one’s direction. Neat stuff.