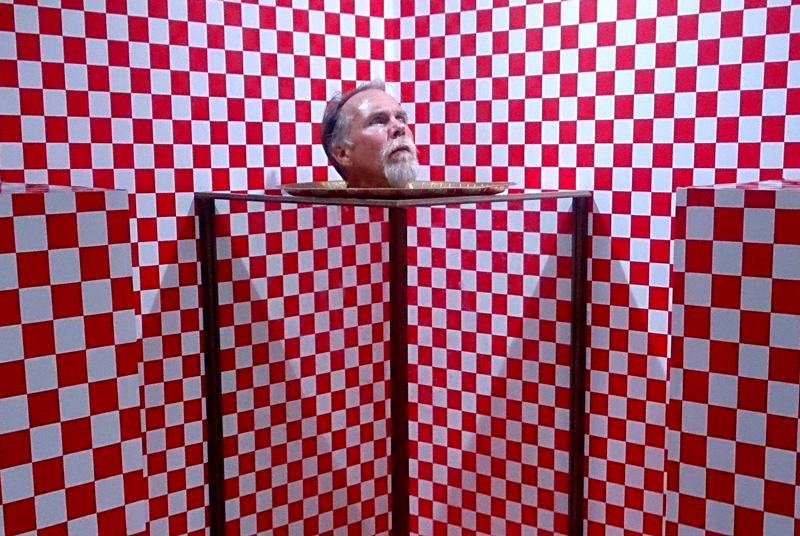 We arrived in Madurai at nearly midnight, after an emergency dental tightening and a long train ride. First thing, right after we left the train station proper, a young man starts following us. He tries to talk a couple times, but we wave him off. “No,” he says, “help you. My hotel.”

We’re good, man. Leave us alone. But he doesn’t. Instead, he walks with, around, and tries for between us, but we won’t let that happen. He’s jockeying for a position that will let him walk up to the suitcase James is carrying, but I cut him off. He pulls out a phone and texts and I’m thinking he’s got a crew and he’s setting up a group to roll us, but no one comes from the open gate or the next side road.

Finally, I get impatient and wave him away. “Go. You walk that way.” In the process of waving, I swat him in the shoulder…he is following that close to me on an otherwise empty road. James is walking faster and getting tenser, and then the kid darts at me (I see him coming because I’m not taking my eyes off him), flails at me, and slaps my chest. I don’t know if he’s after my backpack strap (stupid) or retaliation for touching him, but he’s not so stupid he doesn’t know to run once he’s touched me.

He’s long gone in no time and James doesn’t chase him far in case the distraction is the whole point. We’re basically at the hotel by that time anyway, so we sweep in past the lounging dudes out front and handle the check-in with ill grace. All I want is a private room with a lock and some time for hugging.

Rolling one of those stupid suitcases down an Indian street in the middle of the night, wow, you might as well paint a target on my shirt that reads “Exhausted Tourist” on the front and “Pocket Full of Cash” on the back.

He (our 88lb bad-guy) picks us up quick and I pick up the suitcase and pick up the pace. I’m pissed from another 7 hour train packed with kids and politicos yelling at each other in four languages I don’t speak, and this fucking guy… He trails us, he texts his buddies, he gets a little too intimate and then he swings. I wasn’t looking when Dena went into protection mode and got loud (really loud!) so as I turned and dropped the suitcase all I saw was the little prick bolting away. In the moment, I thought he’d stolen our India phone because his phone was lit up in his hand as he hightailed it away from us. I had a backpack that weighed in at about 75 lbs but the adrenaline to make that feel like nothing so I bolted after him. Dena and I must have been on the same page again because I thought about the fact that he had been on the phone the whole time he was with us and gave up chase pretty quick. The last thing I wanted was for Dena and I to be seperated when his posse showed up. We were about 30 yards from our hotel when the dude made his move so we had to (got to!) check in with two hearts packed full of adrenaline and our first foiled India mugging under our belts.

Next time, we’ll take a cab.

BTW: What you just read is a perfect example of how we wrote the book we just spent the last four months writing. We’d come up with a story, then I’d write one, Dena’d write one (or vice-versa) then we’d wordy-wrappinghood that mother fucker to life, et vwala.