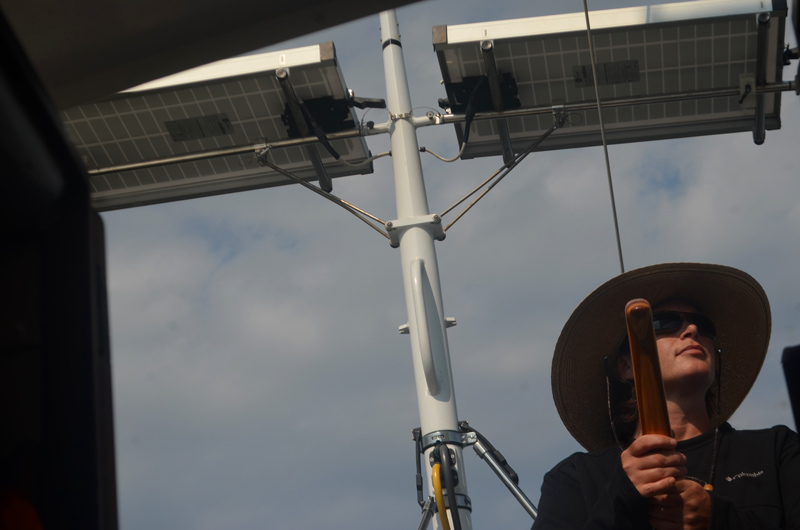 We sailed a great circle over the last week. Not in the traditional sense of navigating along the shortest path, but in the equinoctial Chesapeake sailor’s way. 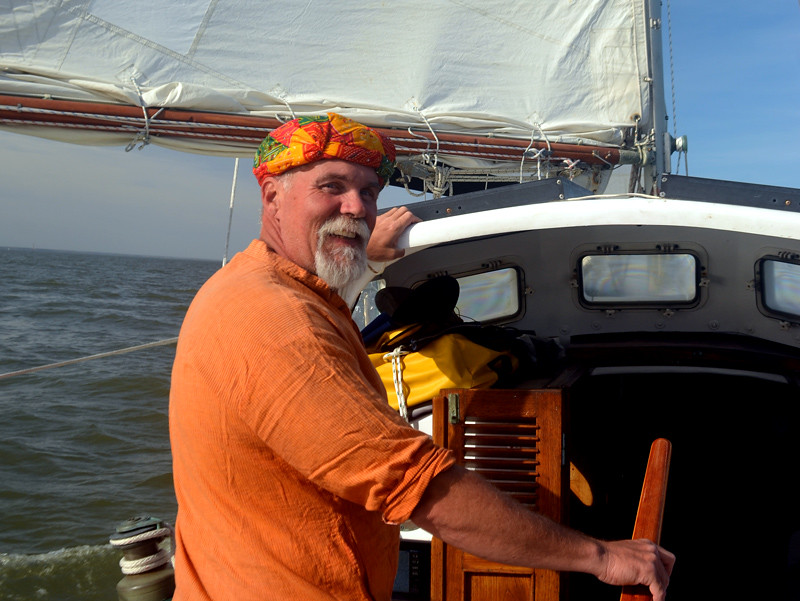 And we looked good doing it.

The wind direction and intensity, the direction and speed of the tidal currents, and the long list of neat places to visit combined to allow us a circular path around the upper Chesapeake. In winter, the winds come largely from the north and, in summer, from the south. In the shoulder seasons, though, the wind cycles through the compass as weather patterns form and pass over. 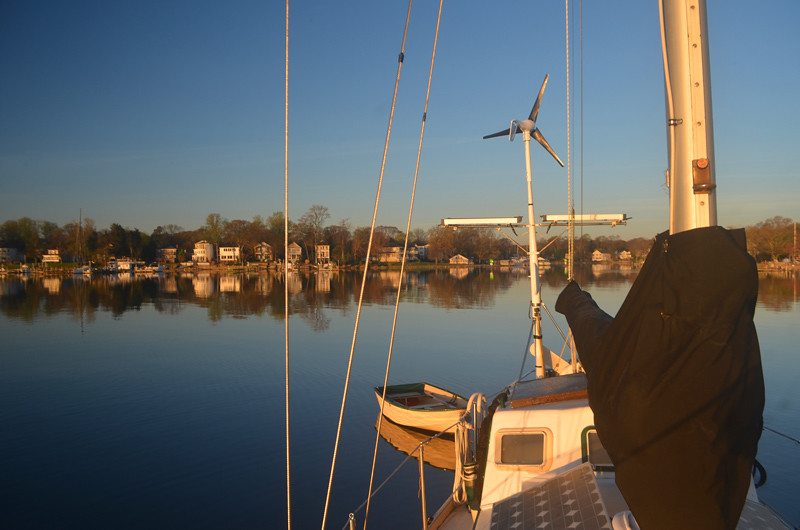 This gorgeous anchorage (unofficial, like most of the places we drop the hook) rewarded us well for an unexpectedly hard day. The whole point of the spring circle is to have easy weather for the whole trip, wind on or abaft the beam, and helpful currents that don’t turn choppy running against the wind.

On this occasion, we jumped the gun by leaving Annapolis before the tide had well turned. We slogged a little – like walking through a few inches of water, though, nothing drastic – and motorsailed in the morning’s light wind. As we came up next to the Magothy River, a loud clunk preceded the onset of a heavy vibration. A rattling, beating vibration that got everything on the boat moving, even at the top of the mast, where the 3′ VHF whip antenna taught an impromptu lesson on sine waves. 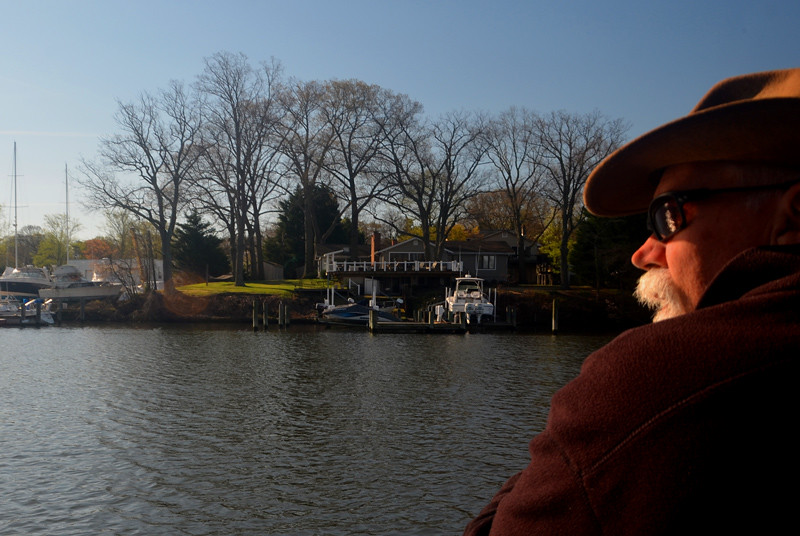 We figured out pretty quickly that it was drive-train, not engine, and sailed up the Magothy to a spot I (Dena) decided would be safe and convenient for both anchoring and receiving help. We’re getting pretty good at receiving help, something that surprises and pleases me. We’ve been so independent for so long and it’s nice to remember what friends do for one another.

The help we needed was simple – a ride. James’s friend and coworker Paul picked him up and drove him back to Watergate Pointe, where James’s new-to-him and never worn wet suit sat in storage. When he came back, it was the work of only a few minutes (after the process of acclimatizing to the cold water) for him to figure out that one of our three propeller blades was missing.

Another set of cell-phone contacts, and he discovered that Bacon Sails’s owner, Steve, has 3 boats at the marina we’d anchored near and that he could get us on the docket for an emergency haulout at Cypress Marina, even though he woke Allen from a Sunday afternoon nap to get it set up. 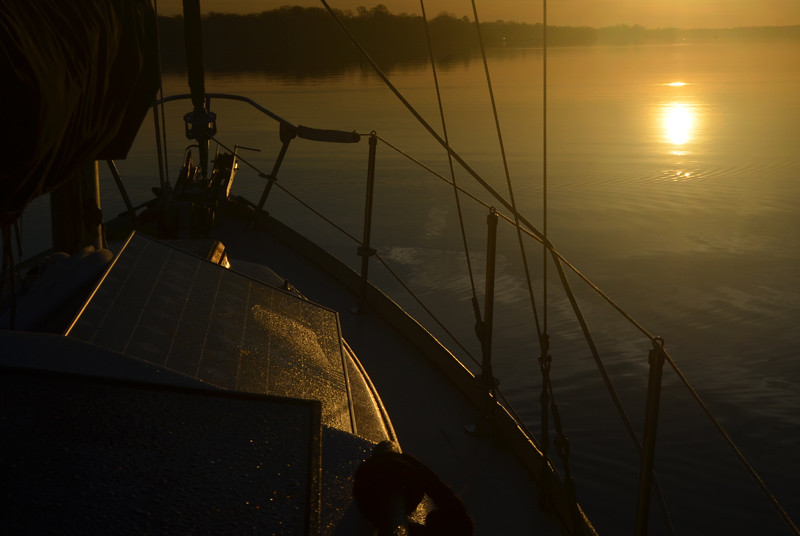 And so we celebrated being safe at anchor and well within our friends’s spheres of influence. 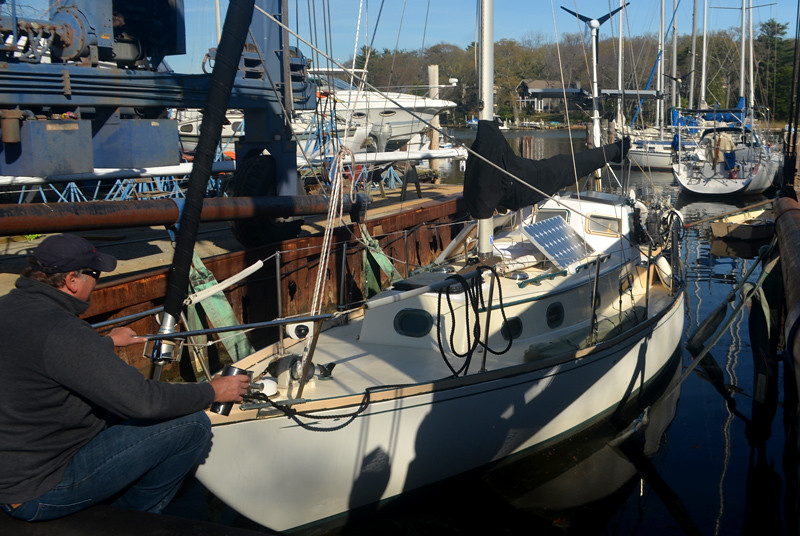 Having the boat hauled brought up the possibility of doing some of the other projects on the haulout list, but… 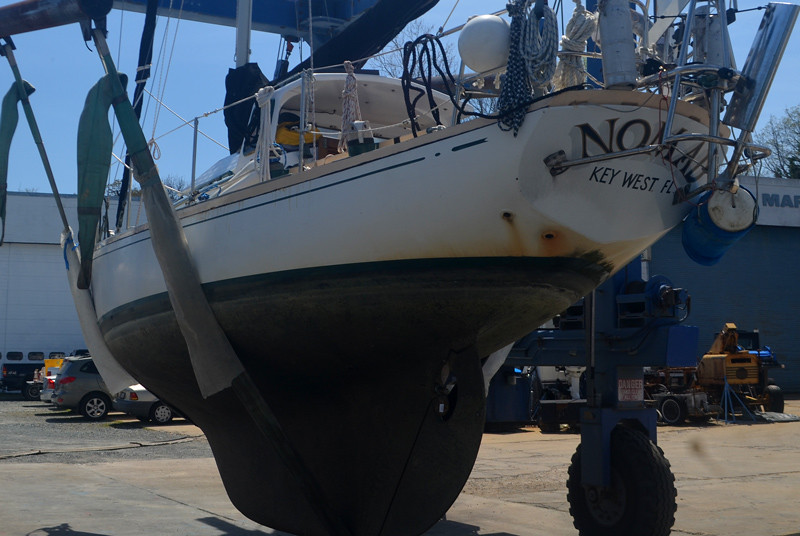 Emergency haulout meant hanging in the straps while we got a new propeller on. Wow – okay! 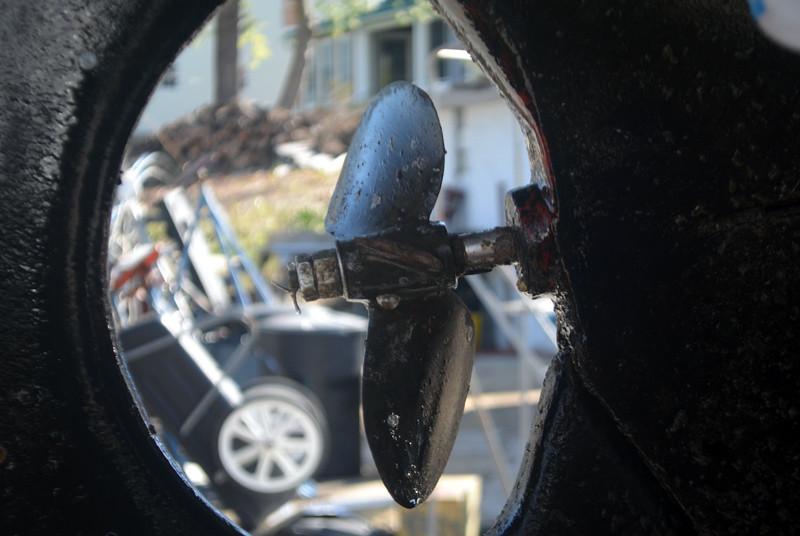 The old, bad prop had seen some good service over the years, but we couldn’t keep a collar zinc on the prop shaft due to an extra long prop key. Basically, we killed it.

Electrical current in the boat may want to reach ground (literally, the ground) through the salt water, which does a bang-up job of conducting electricity. If there’s stray current in the water or aboard, the most vulnerable salt-water exposed hardware begins to break down. Vulnerability is dependent on the substance’s nobility, and a sacrificial anode is installed so that the bronze prop (as the most vulnerable piece of the engine system) doesn’t get eaten by electrical current. 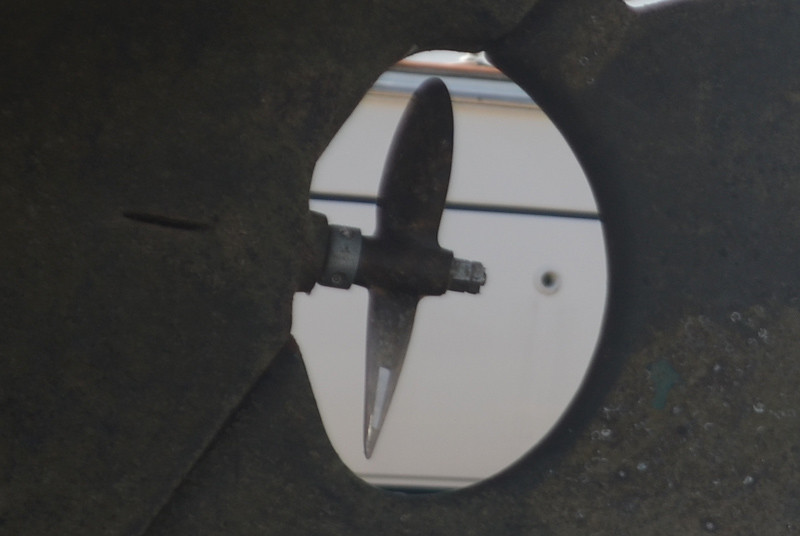 After several trips to Bacon Sails (thanks, Steve!), we had a new prop installed. The old one was 3-bladed, with a 12″ diameter and a 16″ pitch, but the new one is completely different. Two blades, 13″ for both diameter and pitch, this new prop seems to suit our boat much better. We rev well, come off a dead stop quickly, and reach a reasonable top speed. Also, under high RPMs, the tiller no longer pulls so hard to starboard.

So we went back to sailing. 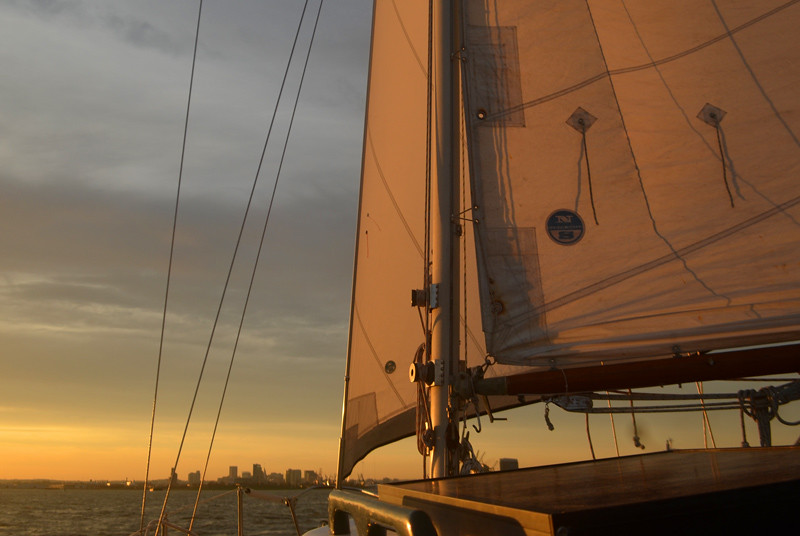 Because we and our friends spanked that prop problem so quickly, we didn’t lose even a day of our planned circle route. We took the last day of southerlies to Baltimore, sailing 6 and 7 knots in a broad reach and flood current. 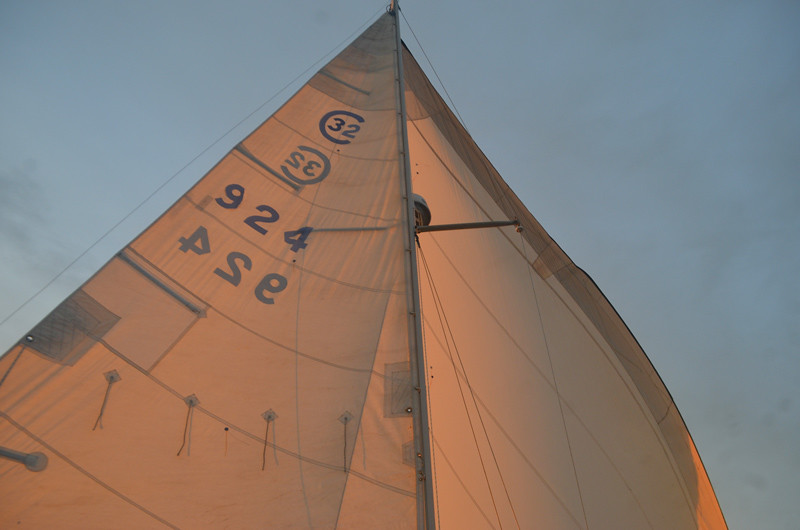 Clear skies gave the sunset an unusual purity. Less of my favorite color-on-cloud action, more of this gorgeous light. 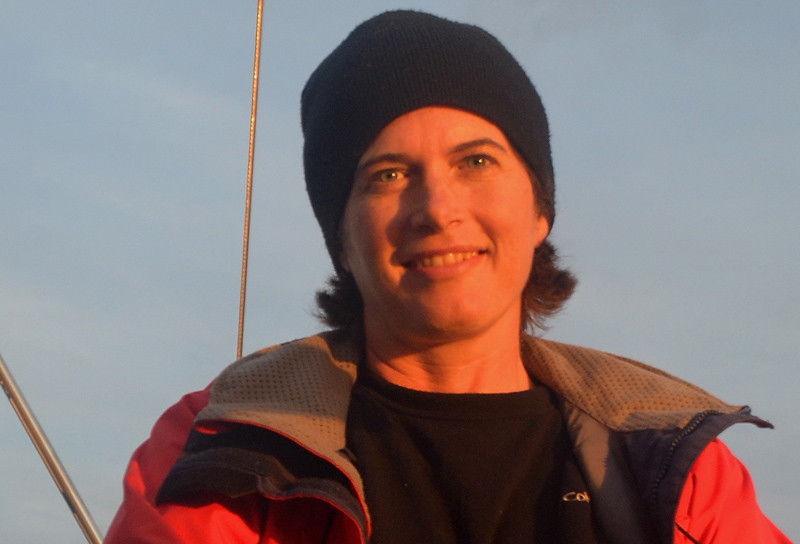 Sunset beat us to Baltimore, but we know that harbor very well. 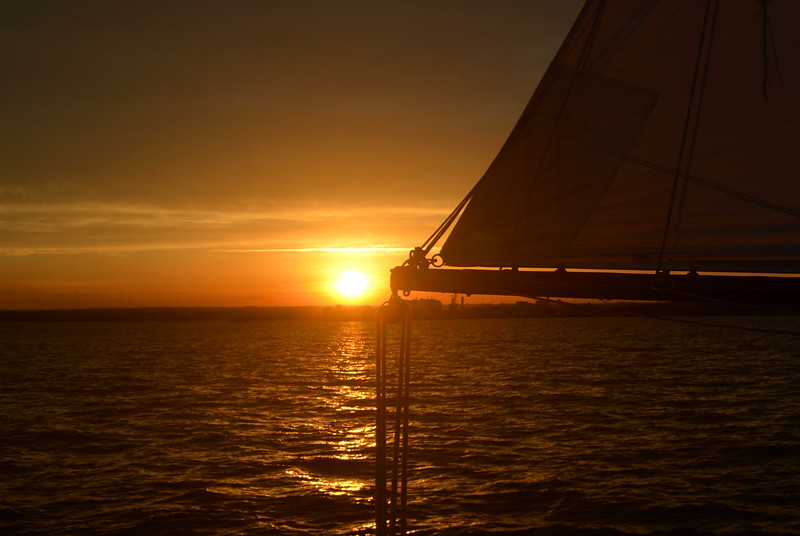 We were hook down off the Getaway Sailing dock in Canton before full dark and chilled the fuck out. 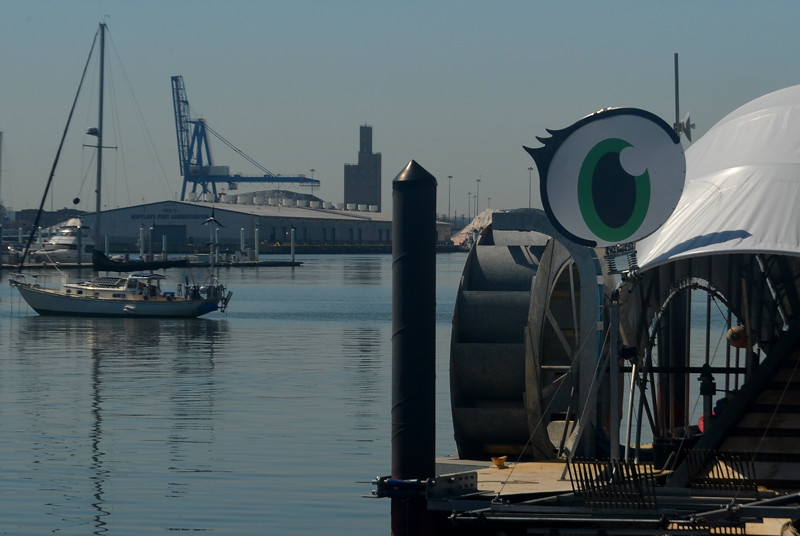 The next day, the siren song of an epic walk got us off the boat and into Baltimore. We ended up north of Charles Village and walking around between Greenmount and St Paul. 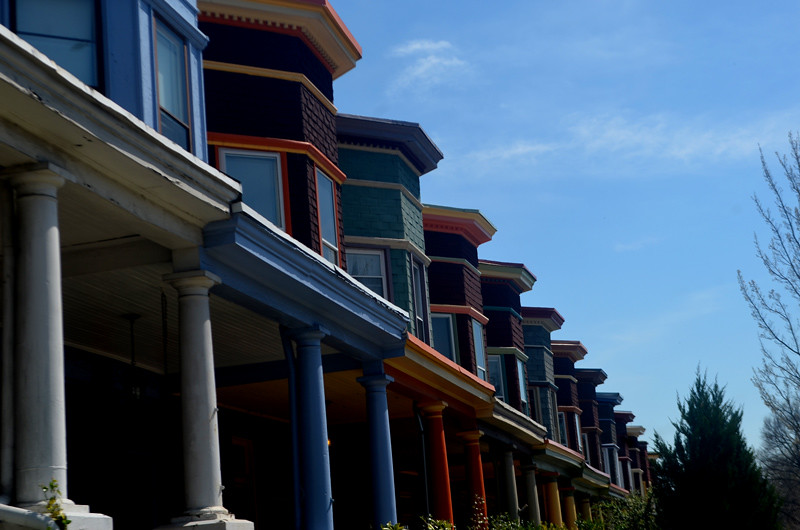 The neighborhoods have such flavor there, each a little different. I can imagine people keeping an eye out for rentals or homes for sale in an exact block or few square blocks. 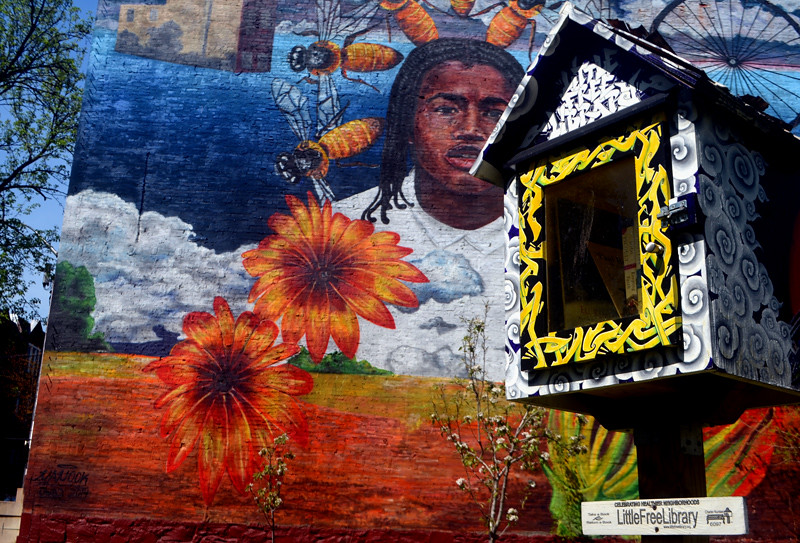 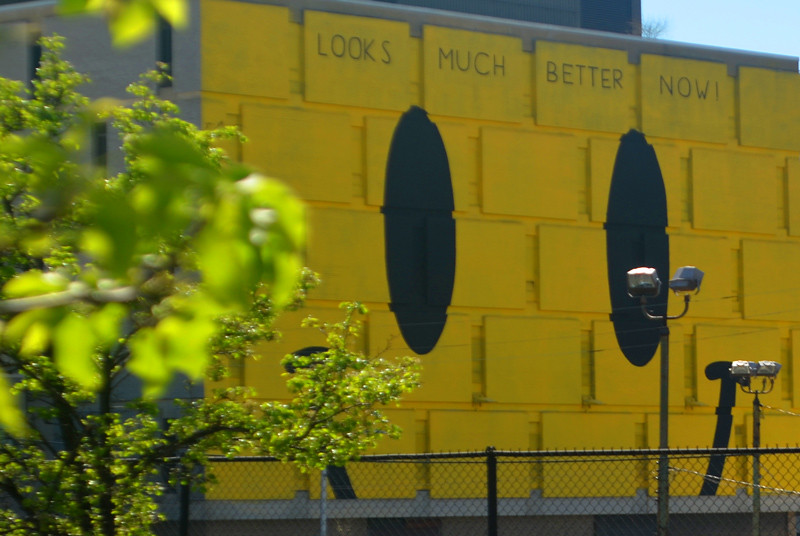 That evening, we took Kate sailing. Kate! She came aboard like we do, via dinghy, and proceeded to look overstimulated and full of joy for a few solid hours. We did Kate’s cruise exactly how I wrote such a thing in my book Lysistrata Cove and it worked! Though Kate is also perfect in other ways, like her willingness to be entertained and her readiness for joyousness. I know that not all charter passengers bring so much heart and soul. Kate was a perfect test case for whether my imagined method was real-world ready, and it is. 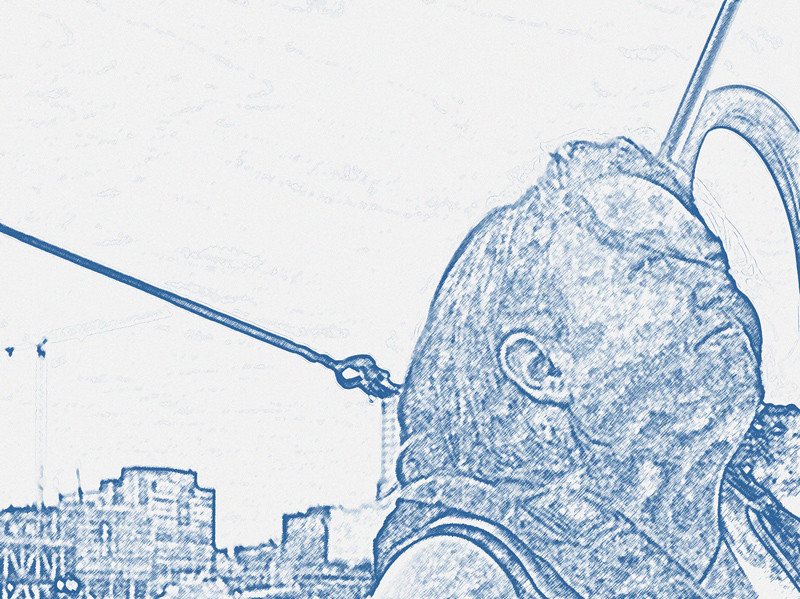 When the wind turned north, we started south. 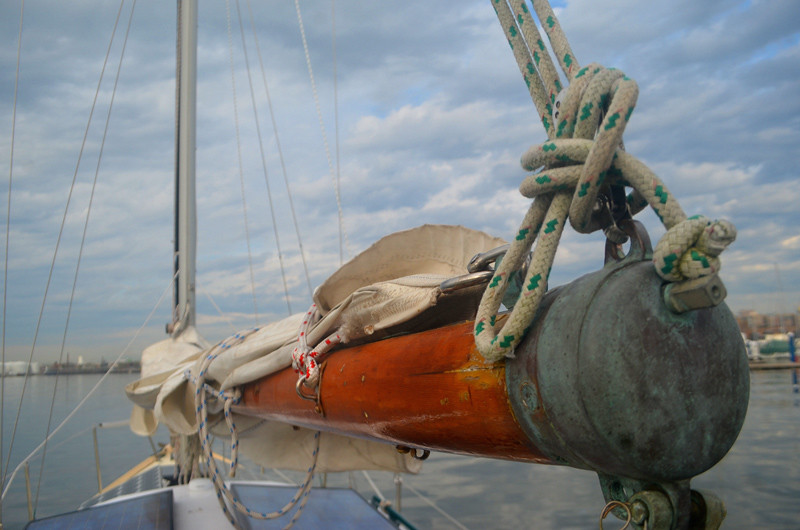 We weren’t literally the only people on the water, but it felt like it. We made distant sightings of crabbers doing their thing and saw a few other sailboats. And then there’s the industrial traffic. 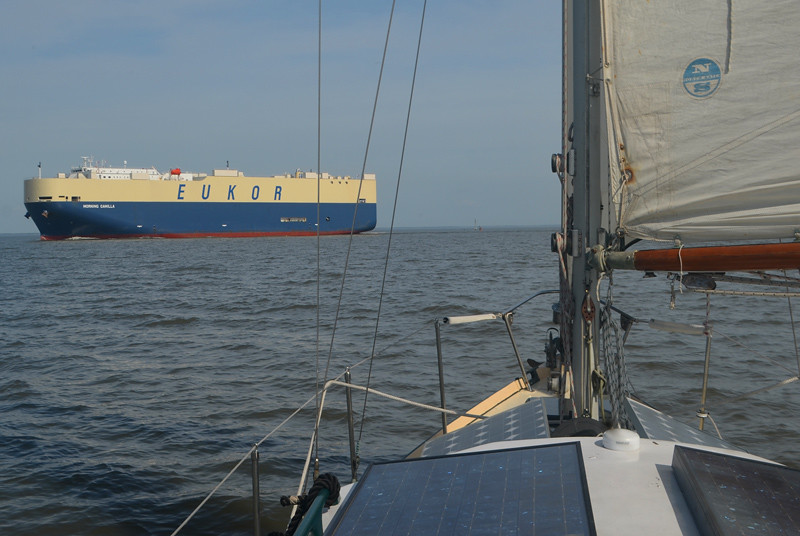 We had hoped to make it up the Chester but preferred to sail, even if slowly. That put us in line for another night in Swan Creek and guess what. It was empty! The whole anchorage was ours! 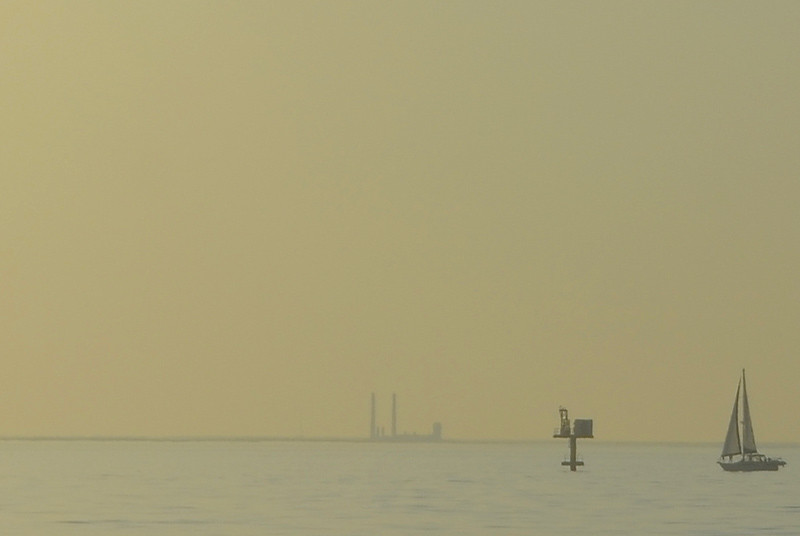 With all that space, I wasn’t fucking around. I chose a spot along the perfectly flat, 7′ deep bottom that gave us the best possible sunset. 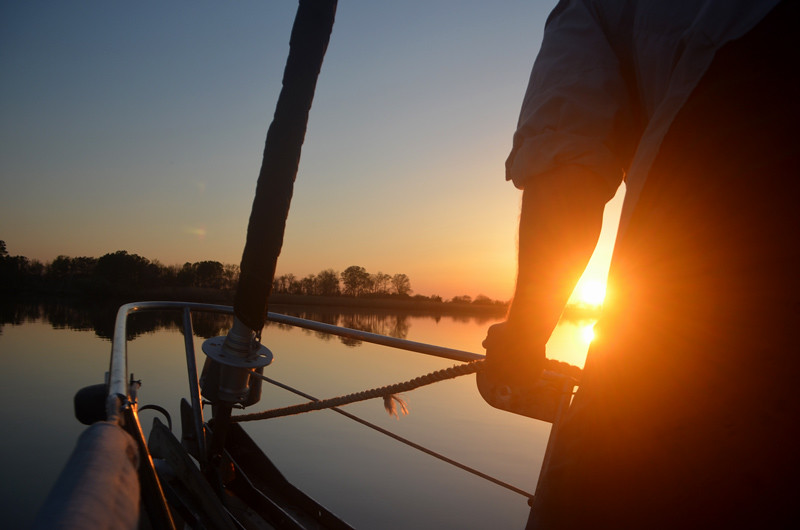 James got us settled in time for a quiet, glorious sit-down.

Meanwhile, our Air Breeze wind generator hadn’t made any power. All that chartplotter and radar power usage, VHF radio and bilge pump and refrigerator drain, and still no power. Then, at anchor, in cloud and gray, the Air Breeze kicked on. 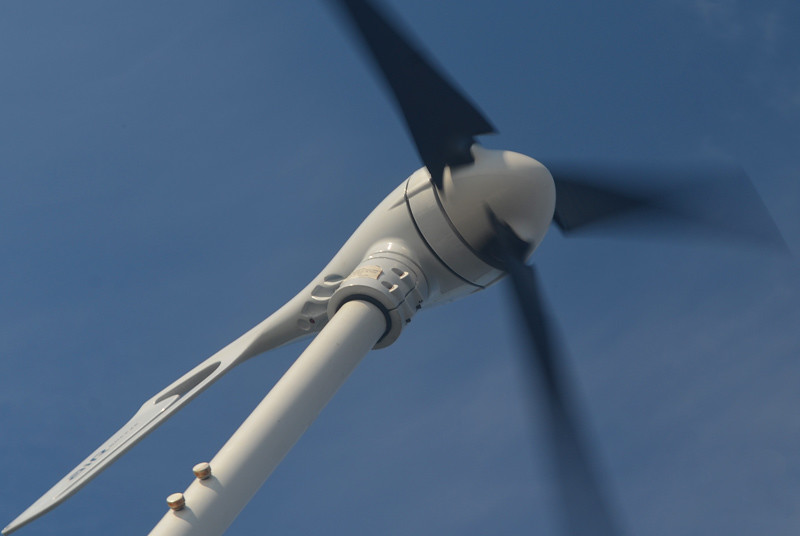 It hadn’t been making power because our batteries had been too full! What a great problem to have!

We spent the kind of day that doesn’t bear reporting on but is such a pleasure to live through. The two of us, loving life and each other, chillin’ in a great anchorage. 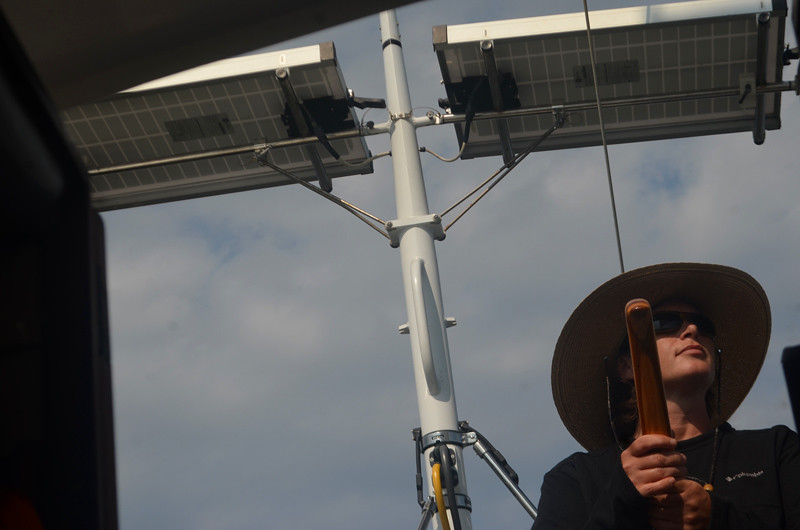 Since we had a good north wind, but the forecast called for heavy wind from the south the next day, our circle plan demanded that we get south of Annapolis before the wind turned around. We sailed past our summer home port and into the West River, then down into South Creek, where we saw another small sailboat had done the same thing. Don’t know if they’re always there or visiting, but I had a happy, congenial feeling about anchoring a nice distance from other sailors. 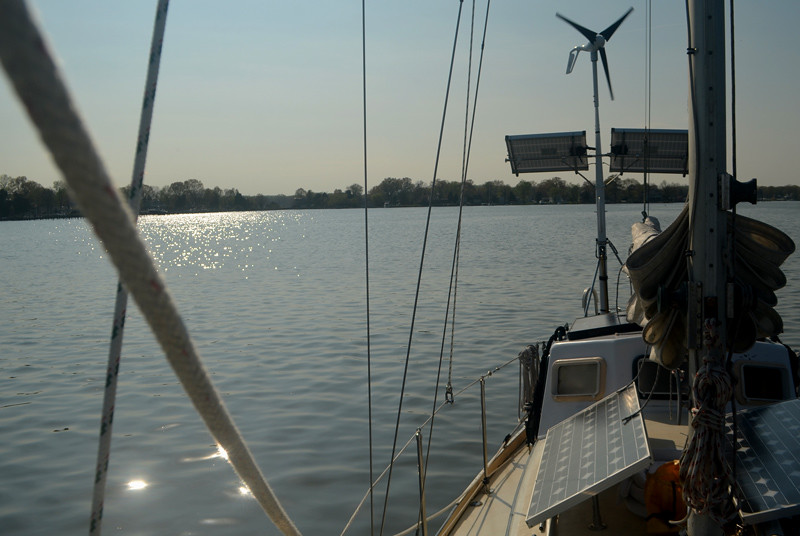 Coming up from South Creek, we had very little wind. The south wind would start to cross the ebb around noon, creating the possibility of big wind waves and chop, so we didn’t wait for the afternoon wind to rise. Instead, we sailed in a ball of reality with a noticeable lack of footprint. The wind wasn’t making it all the way to the water, so it looked glass calm. The boat wasn’t even making a bow wave.

All the forces at work were invisible except in the little flutters of the sails and the little nudges of the tiller in hand. We balanced perfectly there, moving almost the full speed of the light breeze with the help of a slight flood current and occasionally overrunning our wind. 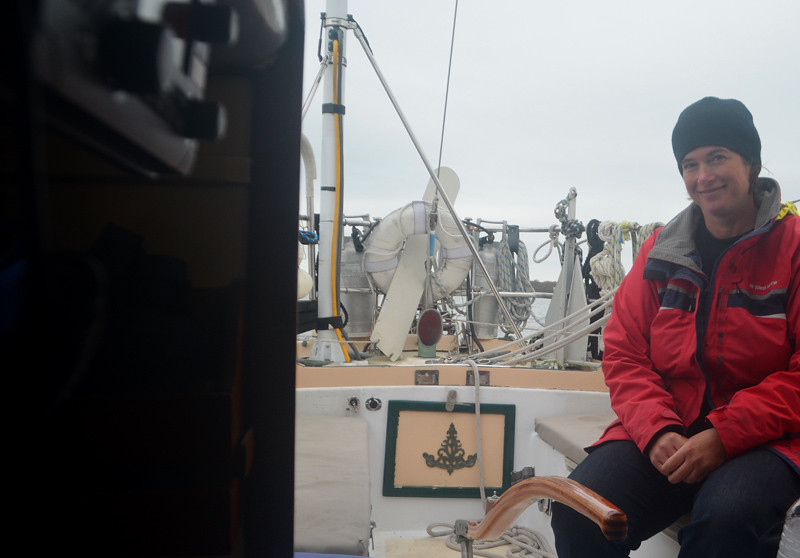 When we passed through the fishing tournament we’d silenced on the radio, it barely damaged the meditative calm. Lowering the main right inside Back Creek, in the basin where we anchored, carried only the barest tinge of bittersweet. We can raise that sucker again any time we like. The boat is in good shape and so are we. Monday, we both go back to the summer jobs at Watergate Pointe and Bacon’s, but damn…

It feels good to be at home, at anchor. 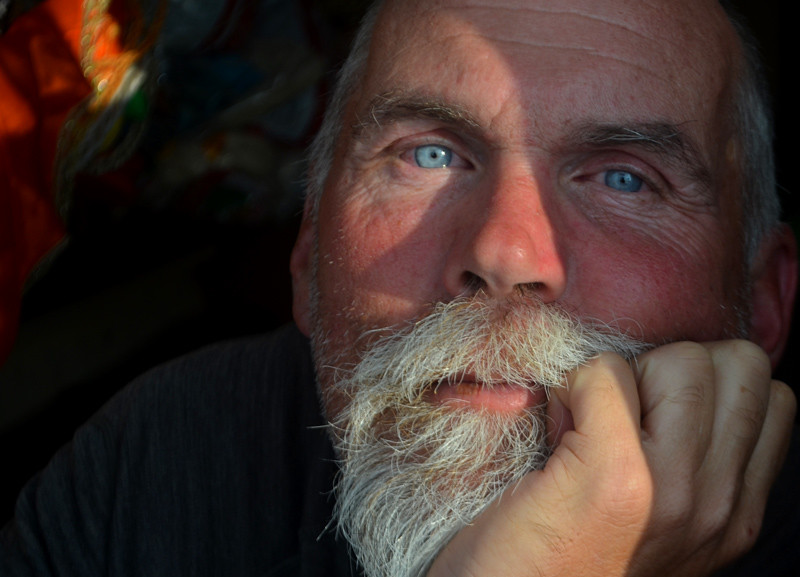