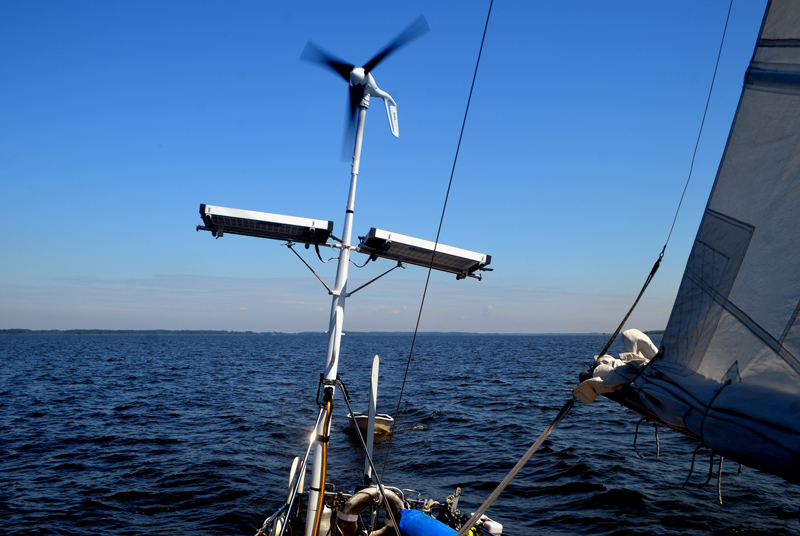 …Of course, like all good sailing adventure stories, it has to start out with a project! 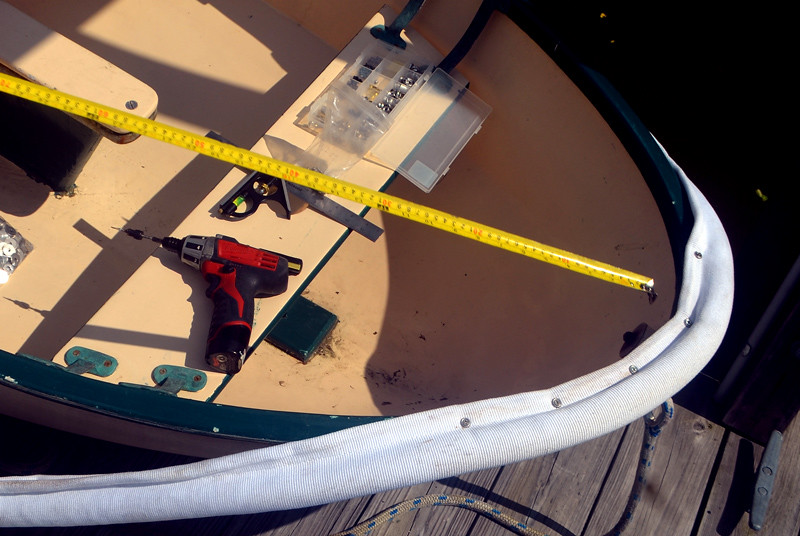 Right after we got back from India, on our first trip back into Bacon Sails, we found what we needed for the one project left to do on our dinghy, S/V Tinker: the rub-rail.

The material is made out of some really tough nylon with a fitted industrial foam core and it’s manufactured by a company that makes it in pre-cut, very expensive lengths. I (Dena) took a last long, lingering look around the back room of Bacon’s after a satisfying poke-around through the whole store and there, on the very top of a shelf, rested a loosely coiled length of exactly the rubrail we’ve wanted since the Mainers showed us how it’s done. The price? About 10 bucks.

For that alone, I (James) am happy to go back to work for them!

Fastening the stuff on is a pretty big deal if you do it right, and we did. Stretch and pull the material into position, measure from the last fastener, place the finish washer, drill the pilot hole, and screw. Stretch, measure, drill, screw, about a hundred times, and all on our knees. But… 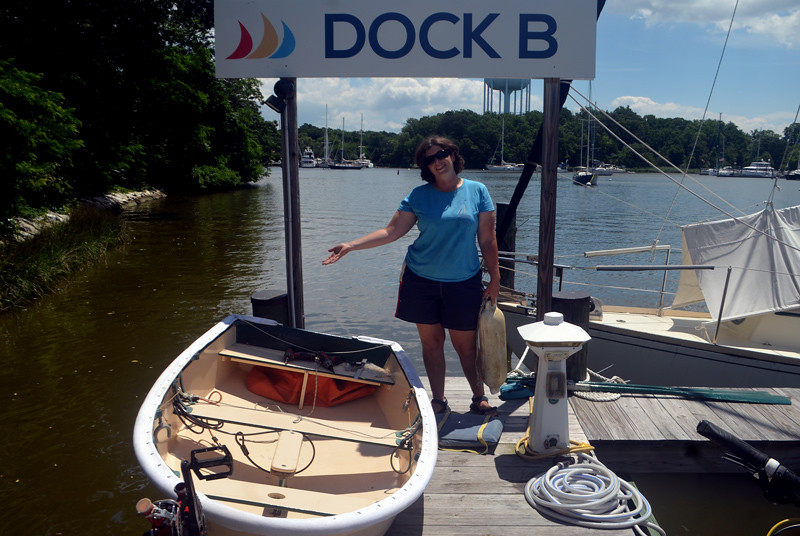 …It’s definitely worth it. 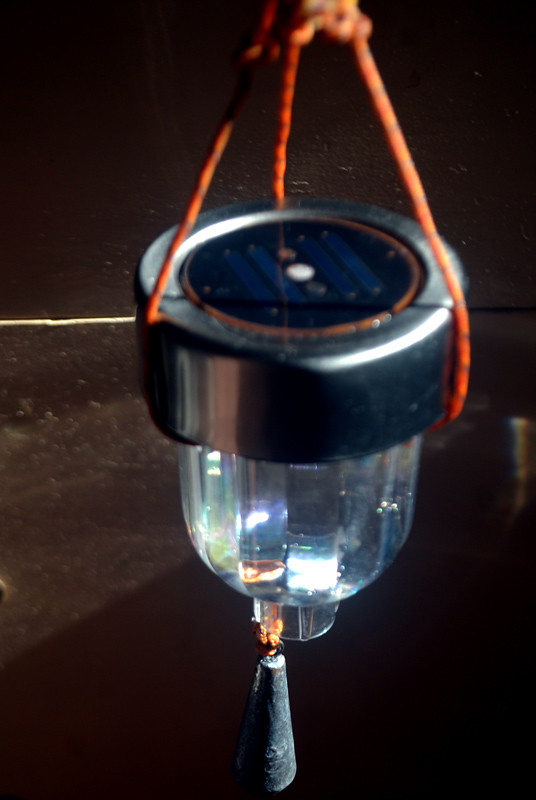 …And then we went sailing!

The winds were kicked up strong from the south and it was a good thing too, because we were about to discover how incredibly fast the local crustaceans can devour an unprotected sailboat bottom.

She lumbered out of the slip, as if we had rudely awakened her from a Sunday nap after a big ‘ol meal. We knew something wasn’t right because, even after we got all sails aloft with the engine pegged at 3200 RPM and a fair current, we still couldn’t get her above 3 knots! Time to dive on the boat.

We decided on Millers Creek just south of the Chesapeake Bay Bridge. It’s close, with a quiet and well protected anchorage up the creek a ways, and we missed it the last time we anchored in Whitehall Bay. We wove our way up inside the creek just as the bee-bee-beep severe weather warnings started up on the VHF, promising heavy winds, rains and quite possibly some hail. Best get the hook down and the rum poured and the hull scraped before things get to busy around here. 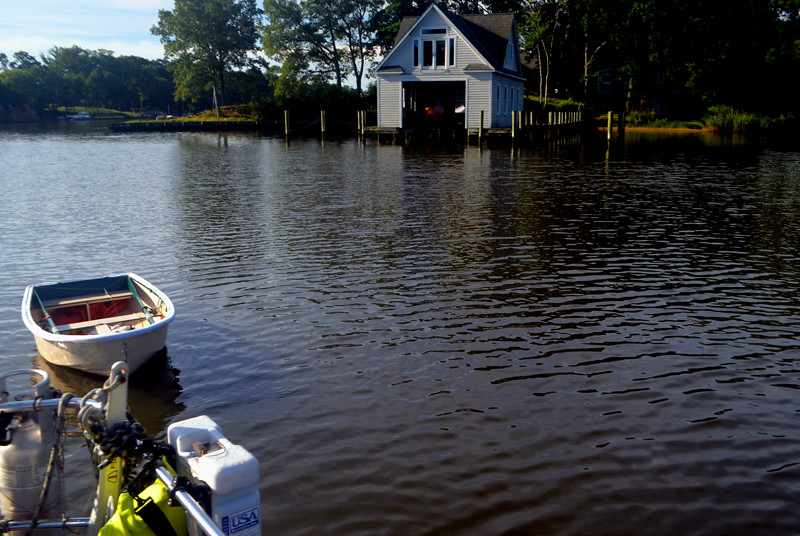 On such a beautiful day, it was hard to imagine the weather could be anything but the picture of perfection. We anchored in about 8 feet of water with a 10:1 scope for the weather, grabbed the scrapers and jumped in… the water was like a cool summer shower at night with the perfect brackishness to open your eyes in.

Wow… Un-fucking-believable! There was a solid sheet of barnacles a half an inch thick (in some places) from stem to stern. Like all of our projects Dena took to Port and I (James) to Starboard (left and right handed) and we began to scrape. I had the big wide metal scraper and Dena had the 6-in-1. She went to work on the prop and the rudder and I went to town on the large swaths of hull.

We got off easy, considering the fact that our bottom paint is creeping up on five-freaking-years. That’s right, “The Yankee 14” was the last time we painted the bottom of our boat! I’m not bragging, I’m just saying!

After about an hour and a half of scraping and being scraped by the evil and tenacious local non-edibles, we had our boat as clean as we were going to get her until we can get a new bottom on the old girl and, I have to say, we did a fantastic job. I got a few memorable cuts and scrapes and I bled a little but Dena, holy-shit, they got her almost as bad as she got them! Her hands were julienned, ouch! While I was enjoying these long sweeping motions of very satisfying crustacean massacre, Dena was scraping all the little nooks and crannies around the prop. 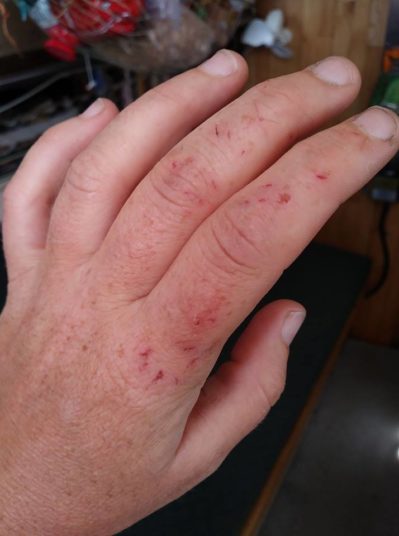 All those little cuts foamed away under a hydrogen peroxide bath and got to the healing. The deep one on the other hand needed a couple days of bandaids and goo. Job’s necessary, though. What’s to be done?

…Best get drunk immediately!
“To Us!”

The rum flowed as a frenzy of local fingerlings swarmed around the boat, gorging on the floating detritus of our killings. It was sublime in that top-of-the-food-chain kind of way.

Yep, we were hungry.

We rowed Tinker down the creek a ways to a very cool little fresh, local seafood joint that we’d passed coming up the river and had a delightful meal as the clouds of doom descended upon us.

I’m telling you, we weren’t back aboard S/V S.N. Intrepid, Itinerant Nomad for fifteen minutes before that storm dropped some classic, Billy Idol cir. 1983, “hell from above”! Unlike that young, pre-motorcycle-crash Billy we were not “crying, more, more, more…”, as a matter of fact we were left dumbfounded by a gust of wind in excess of 50 knots that knocked us over from our starboard beam! The computer went flying as Dena leapt (yes, superhero style) to close the forward hatch and I went out in the cockpit to counter the weight to windward. The boat skittered across the little anchorage at a 30 degree heel before pulling tight on her anchor and whipping us to windward. A blinding mist howled off the water for one sustained blast of wind after another before the rains hit and drenched the world. 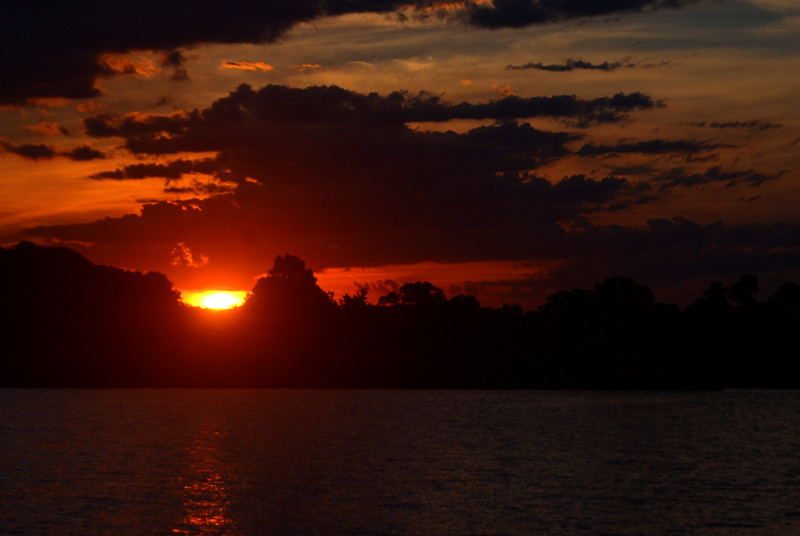 The storm moved on, our anchor held, and the next day was the longest day of the year.

From Millers Creek, we motor-sailed off the port beam on a glorious freshening breeze all the way up the Chester River to a snug little bend a few miles south of Chestertown and within a row of a little public launch called Gray’s Inn Creek.

It was a 9-hour study in how to clean off a prop after a good scraping. The work we did up Millers Creek really did pay off though. On the way up the river with the fair current we managed 6 knots at our fastest which is as fast as either one of us ever wants to go… land or water!

Video of James “at the helm”

Like most solstices in my recent life, I went to sleep at anchor with my lover long before the darkness fell.

…And then we went sailing! 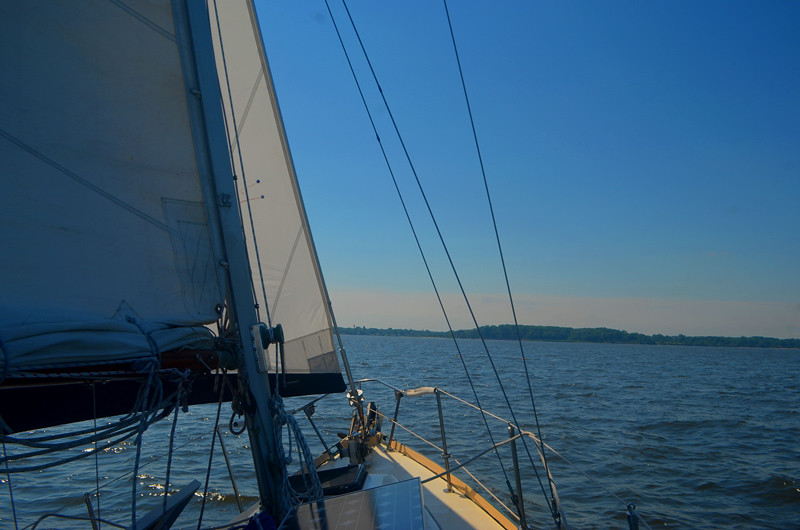 We weighed anchor at the crack-of-noon with the ebb at its 0.8 knot raging max and tacked down river. Before we were underway, Dena made the call to tuck the second reef in, a decision that made for an absolutely perfect sailing day. We were close-hauled for 9-and-a-half hours, tacking tighter than either one of us had since we were on the Mystic Whaler in ’13! 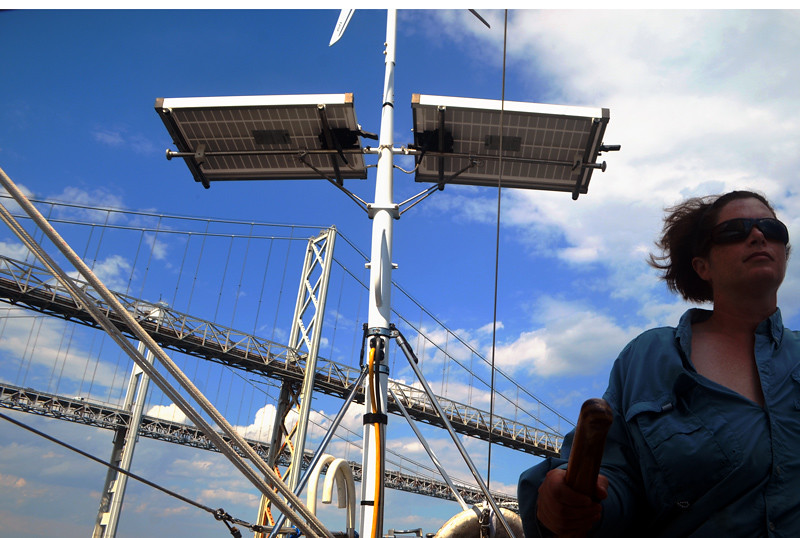 It was awesome and it felt wonderful to work, and breath, and touch, and love my partner doing the thing we love to do; move together through our universe, under sail. 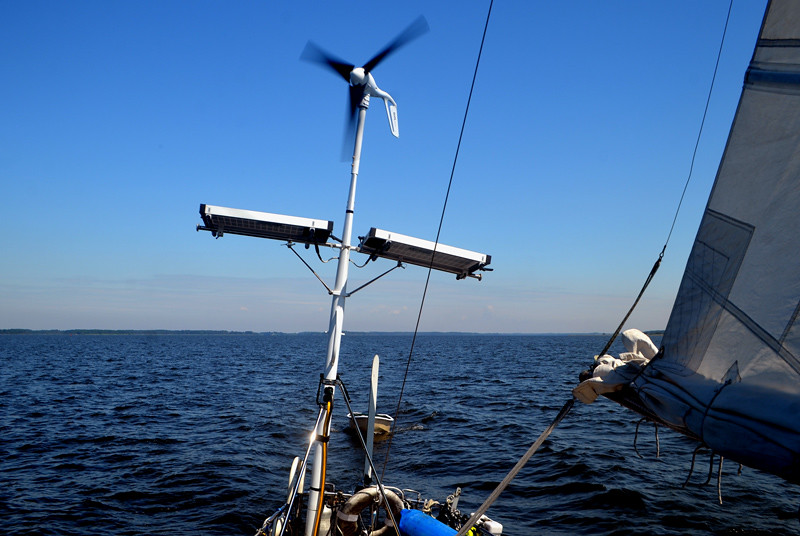 All of our systems worked perfectly, proving once again, that we’re ready to get this vessel underway and go anywhere in the world, now. 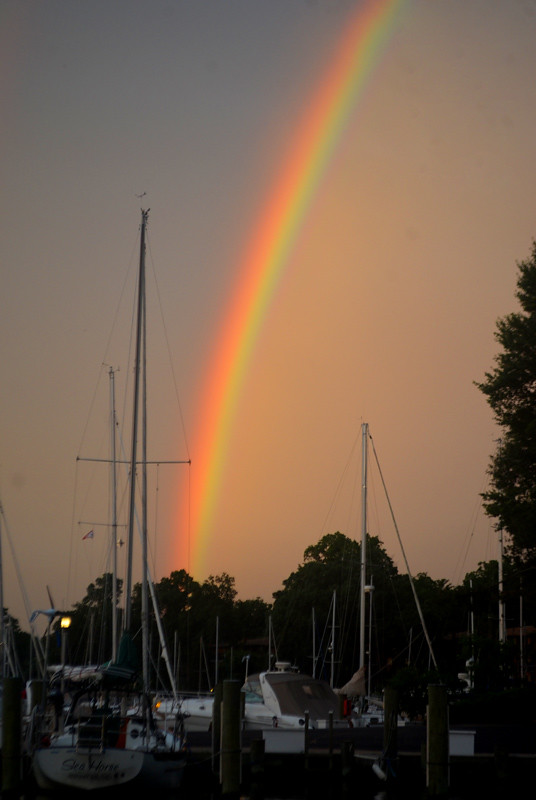