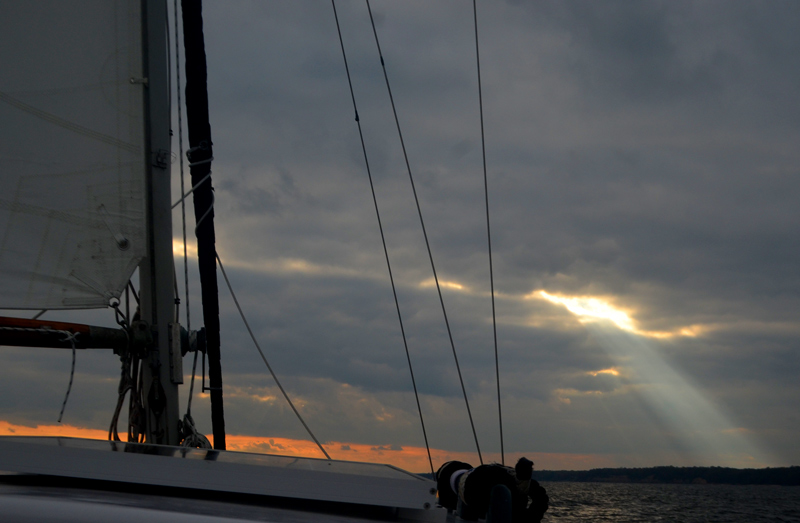 Being underway doesn’t get real until you see this! 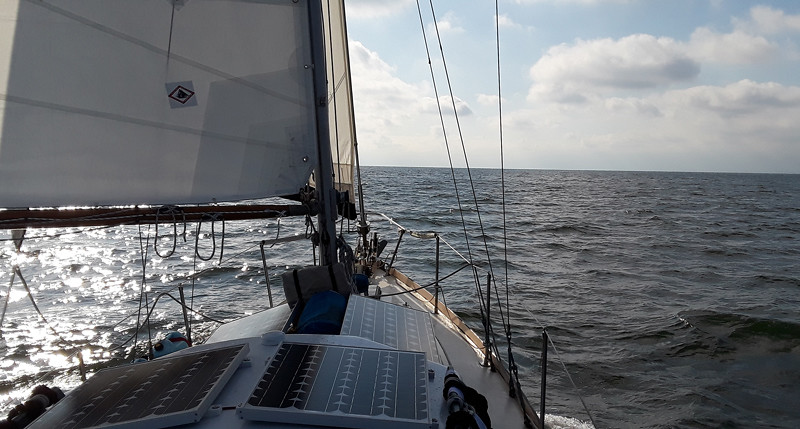 …Absolutely no land in sight.

Okay, okay you’re never really out of sight of land in the Chesapeake Bay except for reasons of bad visibility, but several times over the last few days of travel I’ve looked out over the bow and seen nothing but water. It’s filled me (James) with that feeling of wonder and amazement that I can only get from traveling by sail.

The heater seemed to be working, but then it started snapping itself off for (what seemed to us to be) no reason. A slew of very scientific tests later, we decided that there was no condition under which the heater would continue running. More air (in case it was the oxygen deprivation sensor turning it off)? Nope. Just run it on high; just low? Nope. It went on and on, right down to taking the thing apart, cleaning Bacon Sails dust from every part of the burner, pilot, etc, and lightly scrubbing the contacts for the thermocouple.

Still no love. But we left anyway. The north wind sped us gently along to the Choptank River, where we turned to a close reach and roared to the mouth of the Tred Avon. 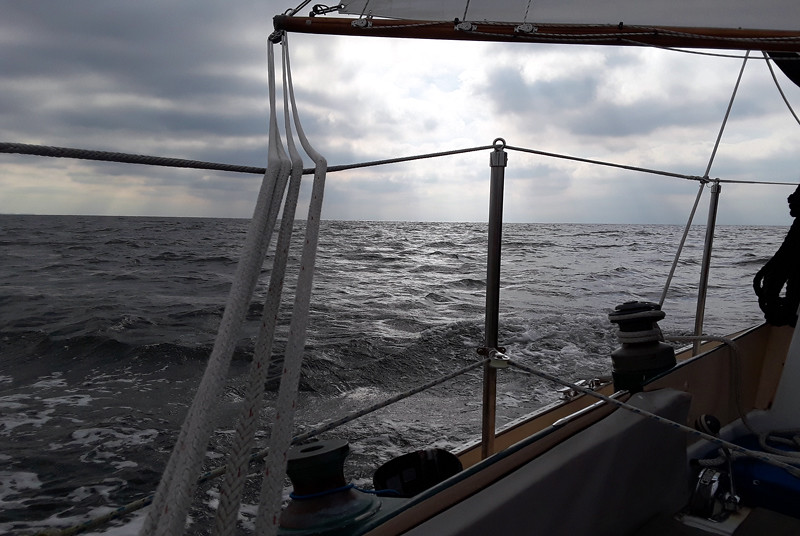 Our anchorage was a simple bend in the river where the venerable trees blocked the wind.

We’d left without cutting our reef ties, so this picture is already old news. 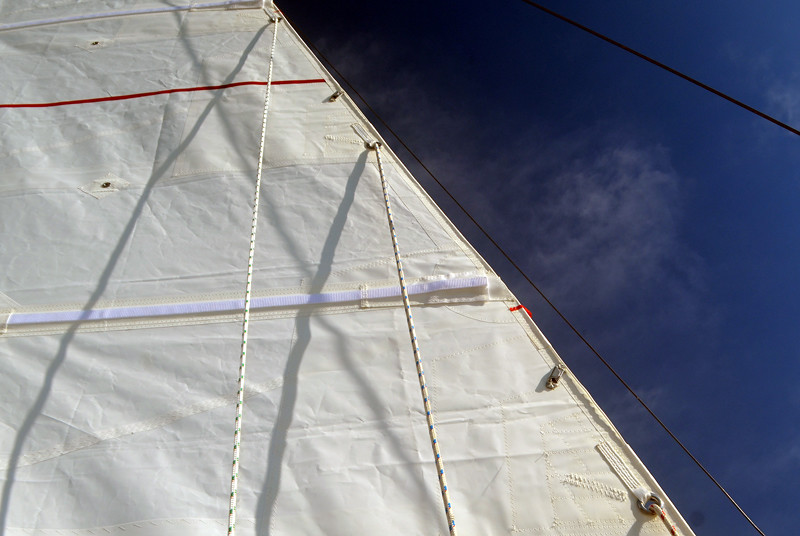 So, about the heater…the last few days of travel have been chilly, with only haphazard heating methods such as drink coffee, bake biscuits, drink coffee, fry some eggs on cast iron, drink coffee, keep the cast iron pan on the fire a little extra long while heating tortillas for burritos…

But it occurred to me. (Dena.) The flame was smaller than I remembered.

We hadn’t used the heater since March, so my memory could be faulty, but a small flame could mean a regulator problem. Those things are supposed to be so trustworthy and all, but it did sit outside for quite some time with no bottle attached…

Before we ordered a thermocouple from Canada and built a week-long delay into our cruising ideas, it seemed a fine plan to buy a regulator. So we sailed to Solomons… 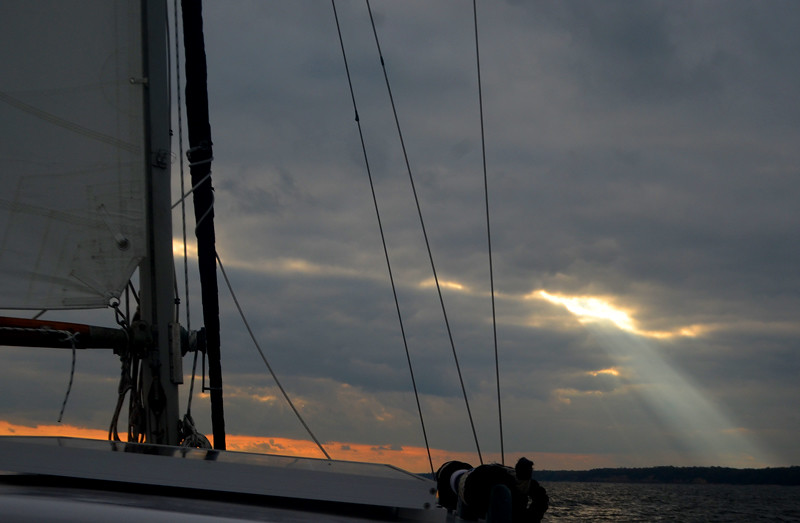 …though we’d planned to hit new ports whenever possible, because the West Marine is easy to access from the Holiday Inn floating dinghy dock (very convenient). We motor-sailed for a couple hours longer than we might have otherwise in order to be anchored and in the store before they closed at 6pm (we entered at 5:30), only to find empty pegs where the regulator should be.

I was chewing glass. That fucking place.

So then my phone confirms there’s a hardware store a half mile away. Fine, we’ll try them. 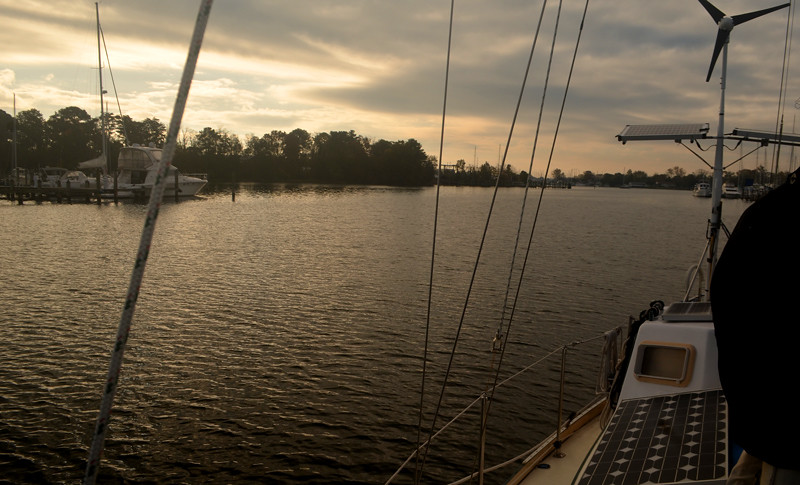 First thing this morning, I called and no – they have no regulators in stock. They suggest the Sneads.

Since I’m not the type to say “Bless you”, I saved myself some embarrassment around realizing that’s a hardware store. It’s about 2.5 miles farther away than the half-mile we’d planned to walk, but sure. Isn’t this why we cruise? To go new places (rinse, repeat) and walk along their highways while large vehicles tease us with the possibility of death?

Actually, no. We savored the walk, the meal, finding the part (and some odds and ends we needed), and each other. We got back and replaced the regulator with complete success. We celebrated.