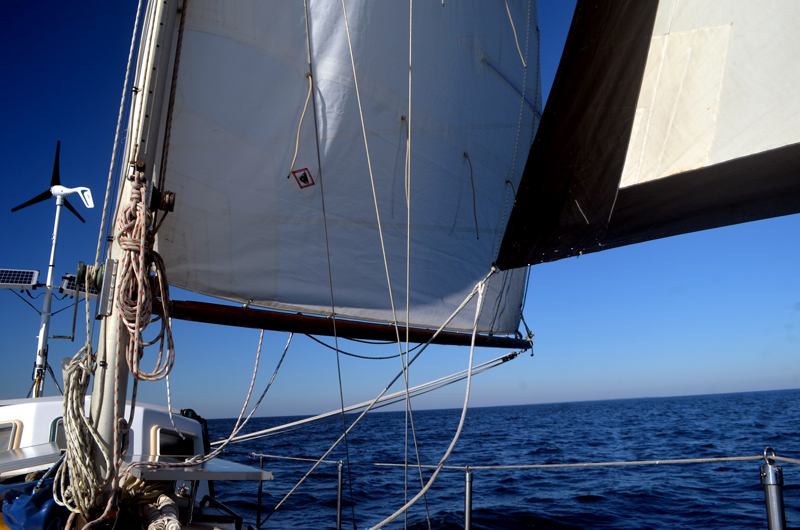 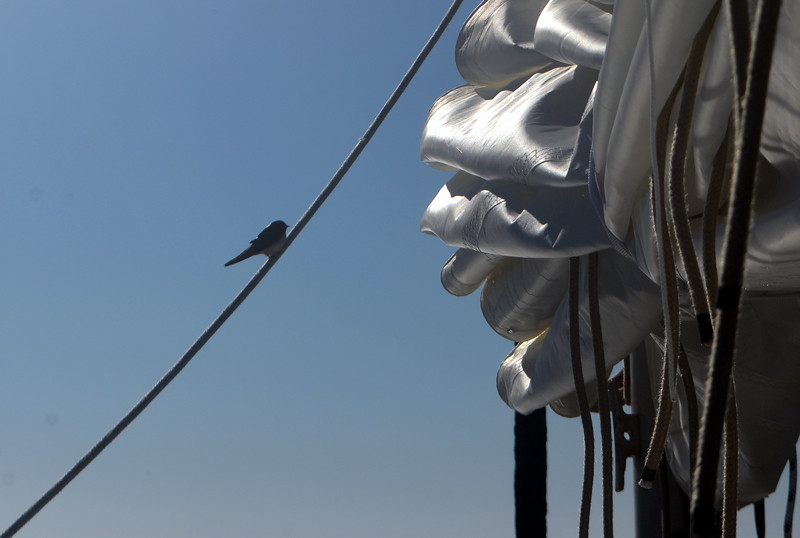 So, at the top of our fifth week underway, I’d say we were into the groove of our strange reality.

The anchorages are piling up behind us and the movement of our Earth seems to flow with the rise and fall of the waves rather than the ticking of a clock. We are not only at home in this world of flux, we made it.

Birds play hitchhiker to get from daymarker to daymarker. Dolphin tease us with glimpses of their rolling backs and splashes. It’s hard to wrap our heads around such details as getting to the propane place on a weekday when the weather forecast is our real timetable. 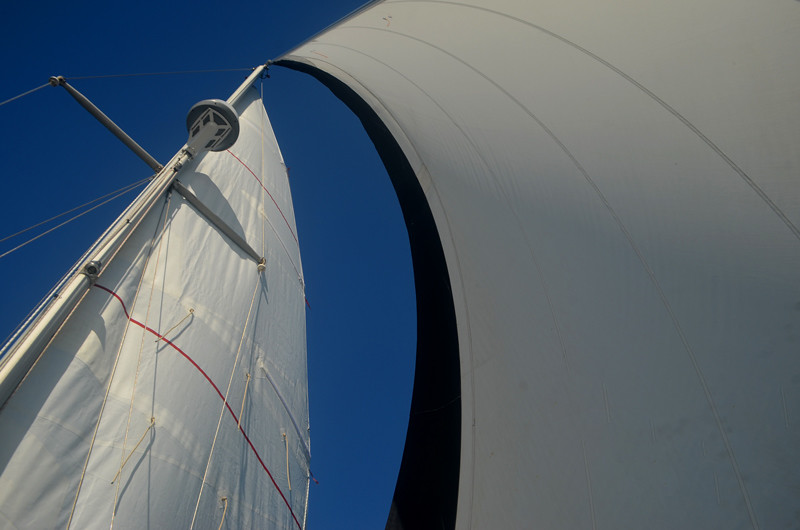 The Atlantic ICW was designed and executed with power vessels in mind, so it affords a sailor few returns. But when it does…the pay-offs are big as long as we’re ready to play along. Motorsailing where possible adds at least a half-knot to our speed, and we regularly outpace our engine’s capabilities when under full sail. 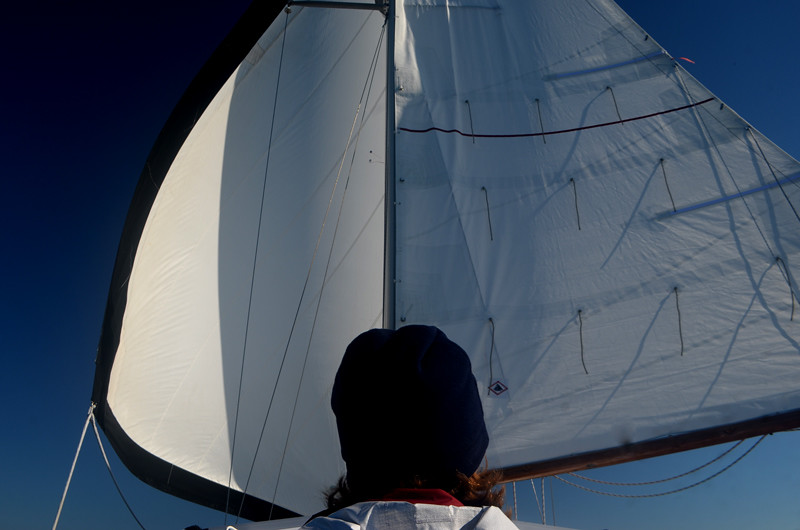 At this point we have put the entire rig to the test on every point of sail in all kinds of conditions and we’re both deeply impressed and comfortable with our systems aboard.

The Great Bridge Route was a lot better than either one of us expected. Waiting out the after-boatshow-bumrush leaving Annapolis is the real reason we’ve had such a good time of it so far. Patience is so hard to embrace without inspiration… 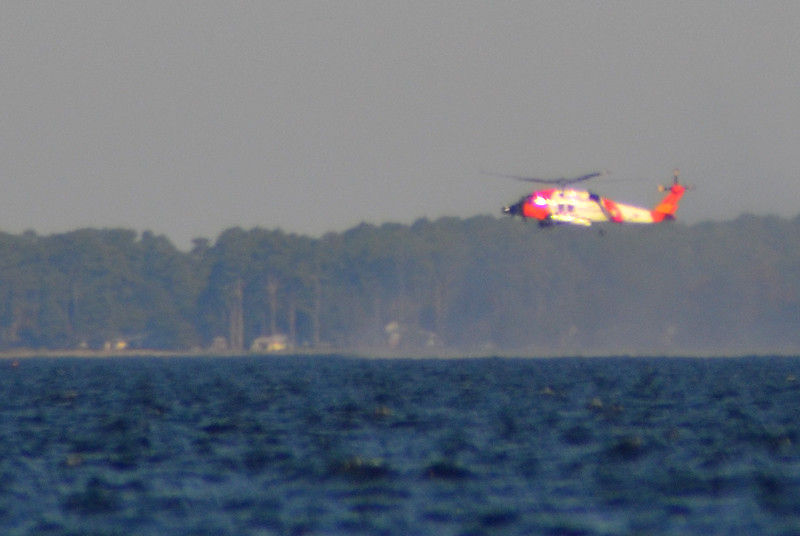 The wide open space between the Albemarle and Roanoke Sounds just north of Roanoke Island is perfect for CG maneuvers, giving the person at the helm a little nervous entertainment while clipping along.

The Manteo waterfront hasn’t changed noticeably since we were here two years ago. This time, being as though it was my (Dena’s) birthday and all, we partook of more offerings than previously. The aquarium has some great tanks in both design and swimming life. We didn’t pet the gators, but we did pet the sting rays (cownose rays). They were into us because it was feeding time. Nice trick. The volunteers there were knowledgeable and fun to talk to. 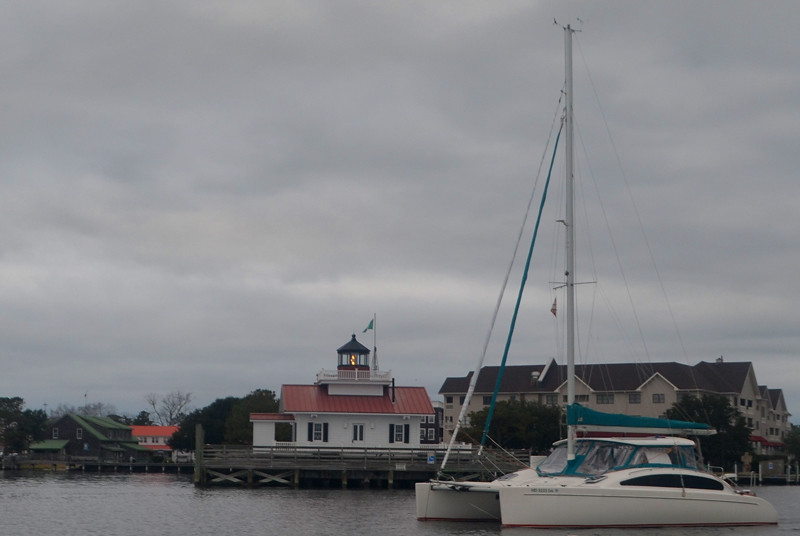 Mike and Redina Miller, of the Severn River, arrived after we did and we all toured the replica ship Elizabeth II together. For a neat little town, Manteo does have some good entertainments. We did not, on the other hand, go back to the Pioneer Theater this time because we’ve already seen Thor.

Now we’re gearing up for an overnight passage. The Pamlico Sound is just big enough, with just enough lack of protection in the anchorages, that doing two very long days sounds less enticing than doing one 20-24 hour sail. We’ll have a full moon (super moon, I hear) and at least partly clear skies.