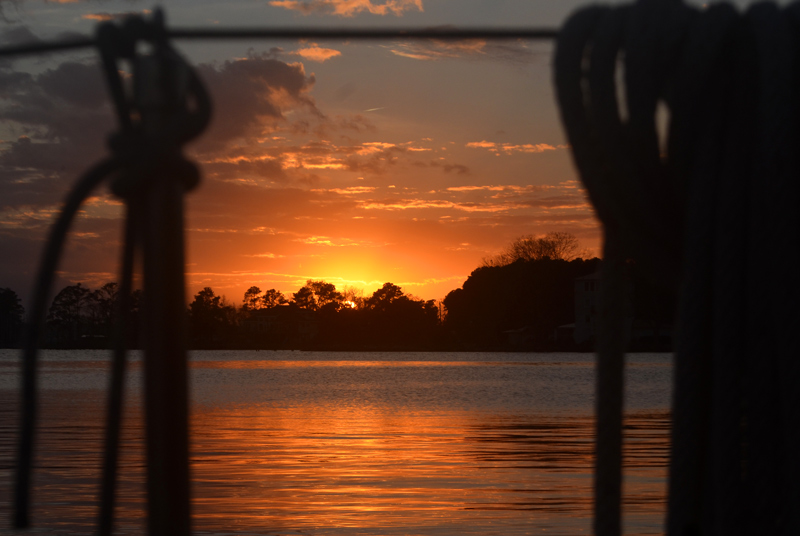 From Oriental, we motorsailed to Morehead City’s Peletier Creek, spent a quiet, protected night on the hook, then motorsailed to Mile Hammock Bay. We made the Onslow Beach bridge opening in Camp Lajeune but a glom of other sailboats arrived just after it closed and got hung up for the half hour before the next opening. 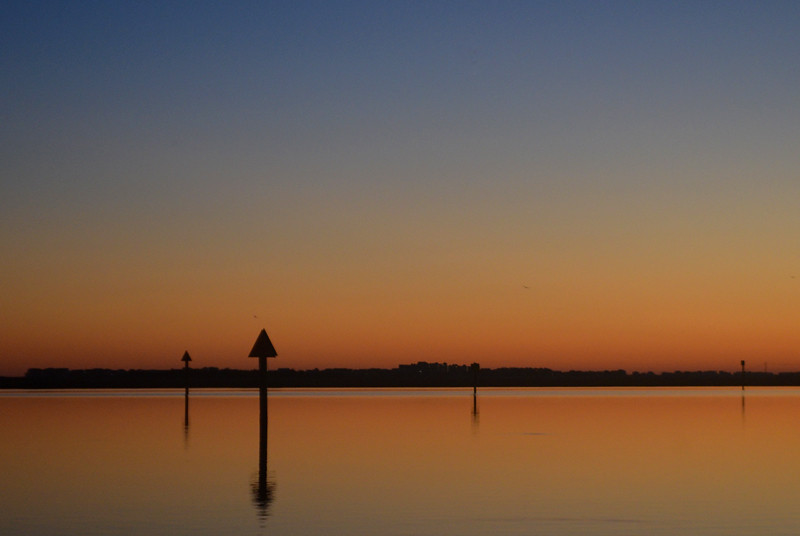 When we dropped the hook in Mile Hammock Bay we were as we long to be, in all anchorages: alone! And for those few precious moments of peaceful solitude we were truly in awe of the profound beauty of this lesson in contrast. 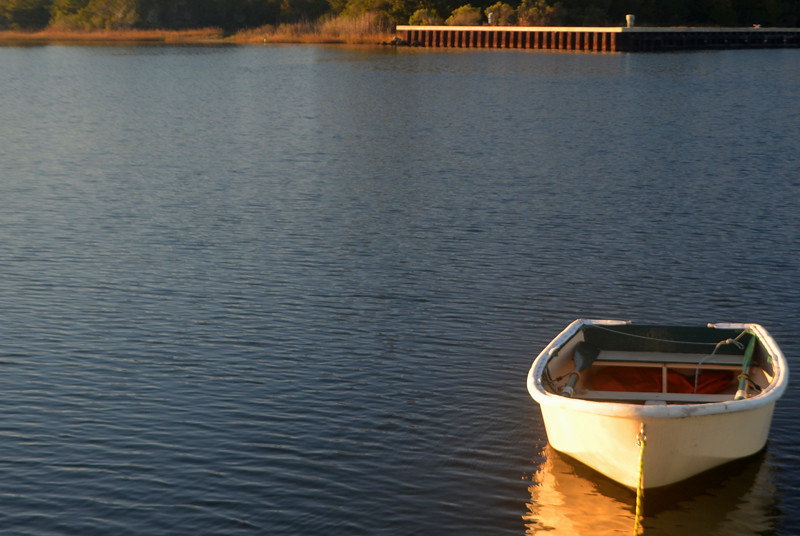 Within moments of finishing the engine we heard the distant thumping of a pair of Marine helicopters banking on the oranging horizon to the west. The birds surrounding the boat burst into the air with a unified cacophony and a dandelion diaspora.

Then, one by one, sailboats filled the sprawling bay around us. First came the Passport 40, Lola, she dropped a pile of chain and proceeded to drag that pile all over the anchorage before finally coming to a stop about 300 yards off our port quarter.

Then came the big French ketch that settled in just a little too close to our starboard beam. I (James) told them as much and they picked up and grumpily moved away. I get the feeling they just wanted to see our reaction before they moved, but they moved, so that was cool.

After that the great big Island Piglet lumbered in and stuck their voluminous Rocna 60 yards off our port bow.

At that point we were surrounded by the very Thousandaire Yacht Clique that we let get ahead of us after the Boat Show in October.

It was looking pretty grim but we knew the wind would be clocking around through the night so we hoped not to get any of the exhaust from the diesel generators encircling us.

Our friends, Kris and Steve, appeared at the mouth of the bay, did a quick loop around us for advice on where to go then settled their anchor just off our bow, ahead of the piglet. 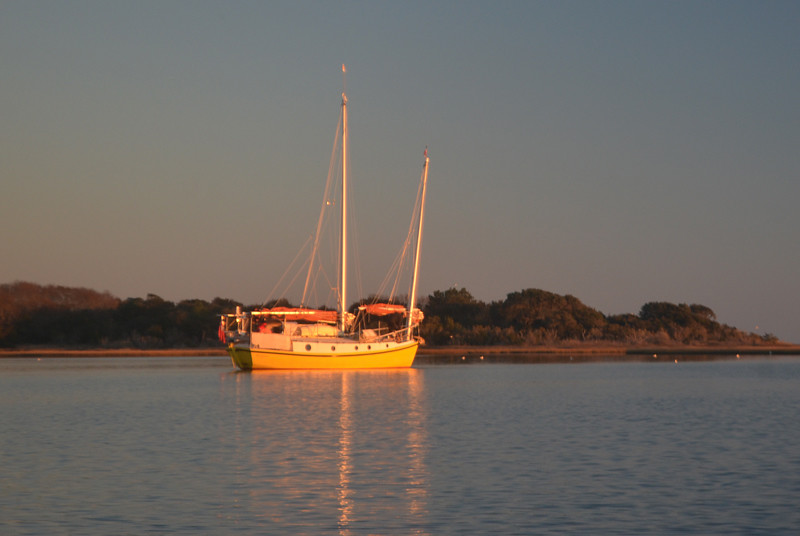 …Then S/V Branwen, the cool couple aboard the awesome junk rigged schooner from Yorkshire, England, did their loop astern of us, just to say hello before dropping their CQR way off in the distant shallows, closer to the birds’ new feeding hole. Trish, aboard S/V Branwen is an avid bird watcher. I’m sure she was in heaven! 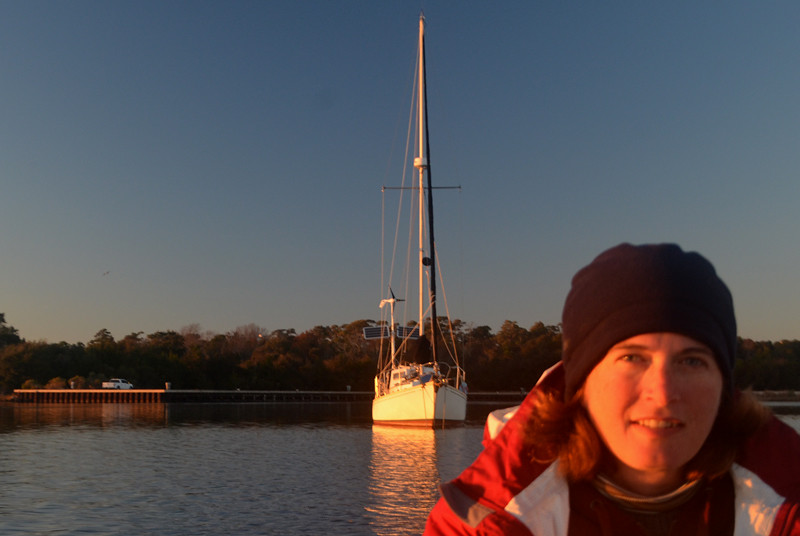 Kris and Steve invited us over to their boat to drink rum and watch the sunset and eat food so we jumped in the dink and rowed on over. 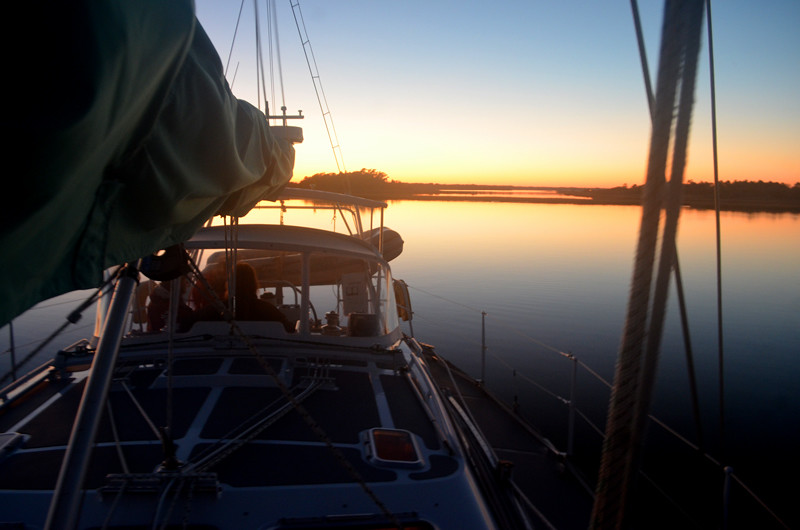 S/V Exit, Kris and Steve’s boat, is a fine example of a Garcia 46, the same boat that Jimmy Cornell has! She’s an aluminum sloop of much distinction and lush accommodations.

(Most people that we meet are very intimidated by our tiny little boat). 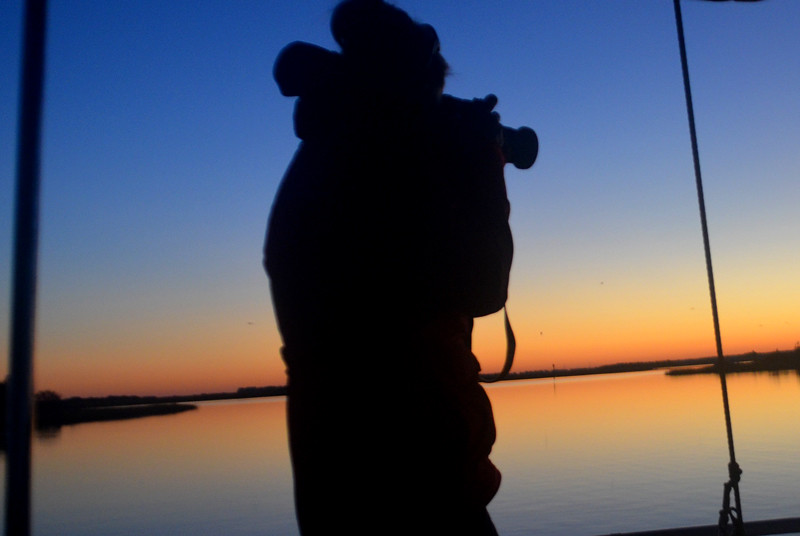 Sun-setted, photos taken, Kraken killed and burritos wolfed, we rowed back to our boat laughing in the dark.