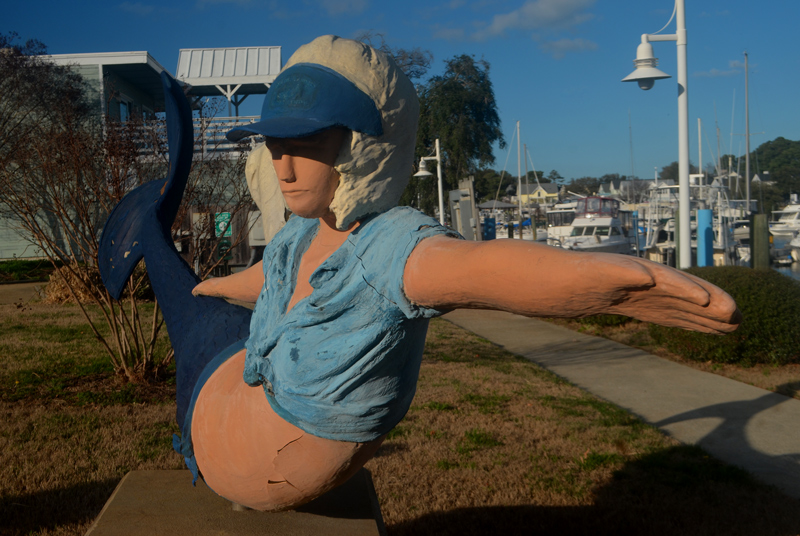 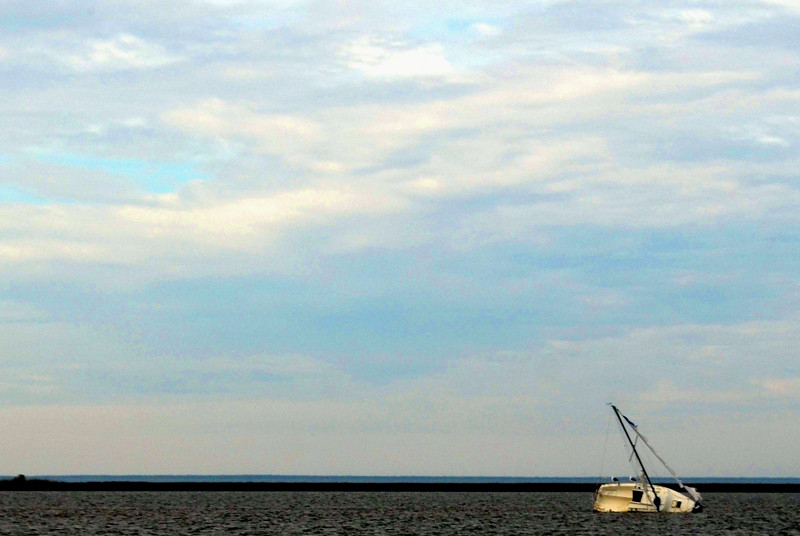 We crossed the mighty Pamlico Sound in two giant leaps… Bam, Bam! We got that shit out of the way.

From River Dunes we sailed on a powerful reach for 10 hours with sharp growling seas all day to the (not so much) protection of the Long Shoal River. As we made our approach to the anchorage the land was so low that it didn’t even show up on the radar until we got right up on it. There’d be no protection from that direction. But the wind and seas laid down just after dark giving us a peaceful night on the hook. The boat was still nice and dry from four days of River Dunes decadence and the wind was from the South so it was comfortable down below.

The next day we sailed to Manteo.

On the way to Croatan Sound the wind and waves were somewhat at odds with each other in the open Pamlico. Although we had a nice fresh southerly breeze giving us a strong starboard reach for most of the day, the waves, wow, were in the 3 to 6 foot range and slapping us right on the starboard beam. It was a sloshy ride.

…but that warm (finally!) south wind felt so nice! 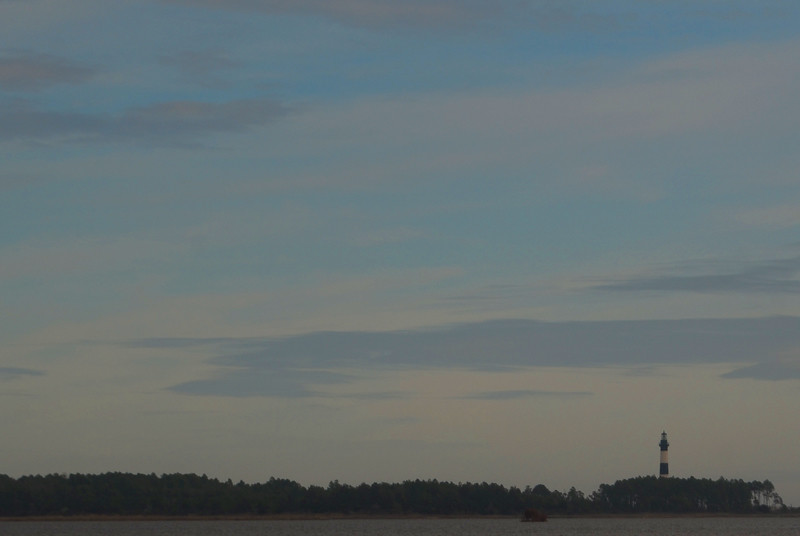 As we passed Oregon Inlet, the only confusing part of the leg, it was a down hill run in a straight line south all the way to the Manteo channel, and let me (James) tell you,  after two hard sailing, 10 hour, days in a row we were actually kind of glad that a big Nor’easter was going to keep us hunkered down for a spell. I mean really, there are worse looking places to ride out a storm. 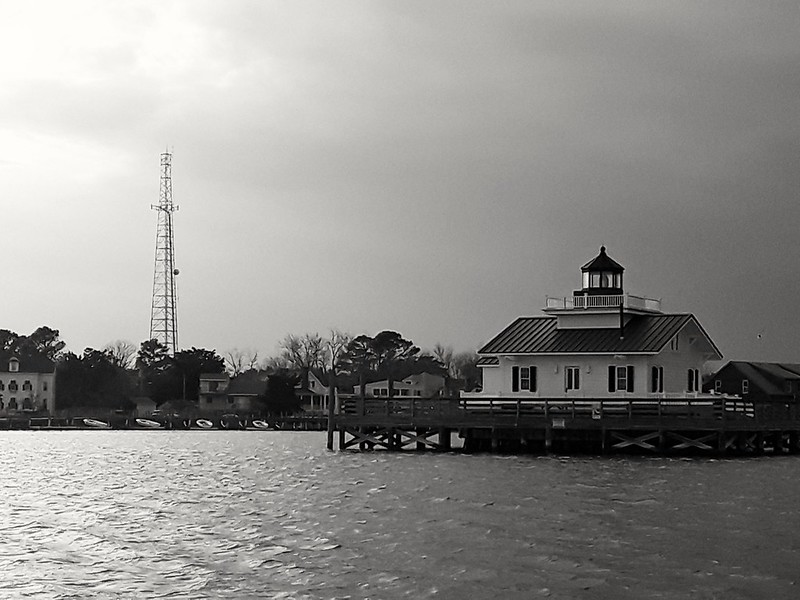 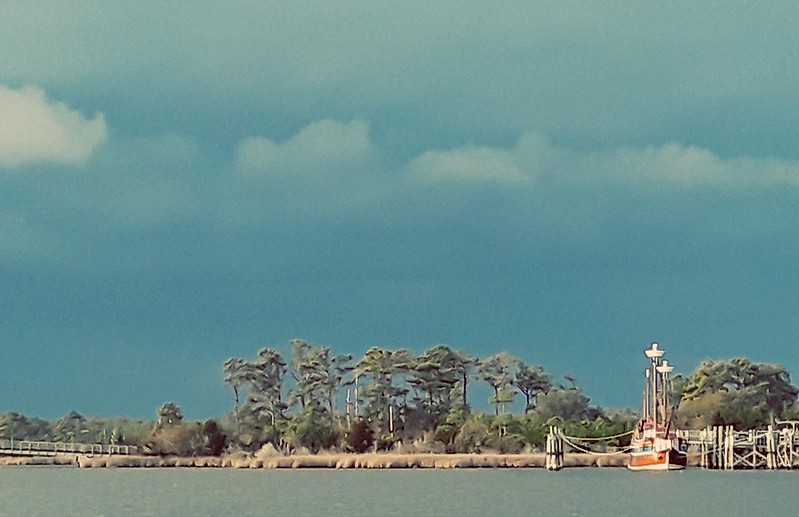 …and for the next 3 days we never even left the boat! 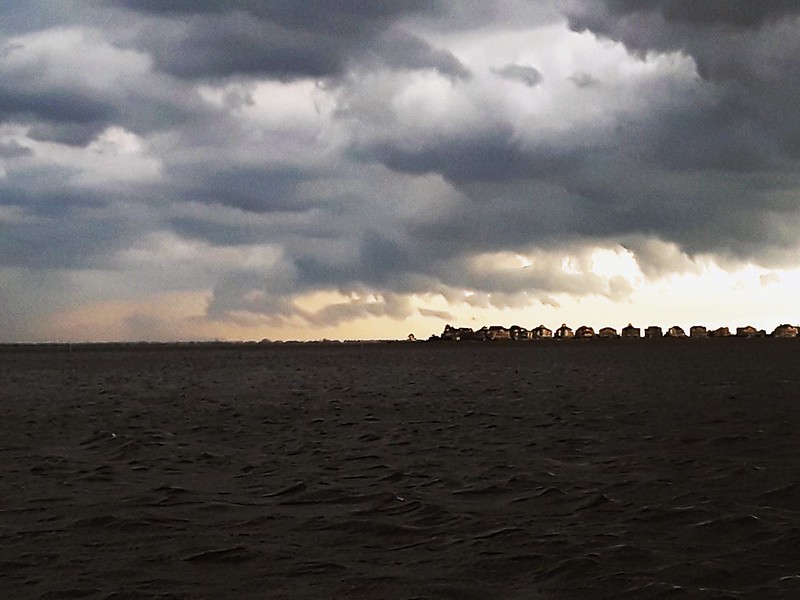 Oh sure, we talked about it, you know, launching the little boat, going ashore, but there were no shits to give! We were so content with just hanging out with each other, on our dry boat, reading and watching movies that we just never made it happen.

Remember, the wind generator gets nice and quiet in really heavy winds so not only did we have plenty of power to do an all day binge-fest of stupid TV stuff, it didn’t even stress us out that the sun never appeard.

It was wonderful actually!

Then the wind came around again and we went sailing.

We had the mainsail up with a single reef tucked in before we entered the Manteo Channel and as we rounded Roanoke Island into the open Albemarle Sound, the jib came out, the engine went off, and we sailed all the way into the North River’s narrow entrance bar before starting her back up, striking the jib, and motorsailing up that deceptively narrow ICW channel. 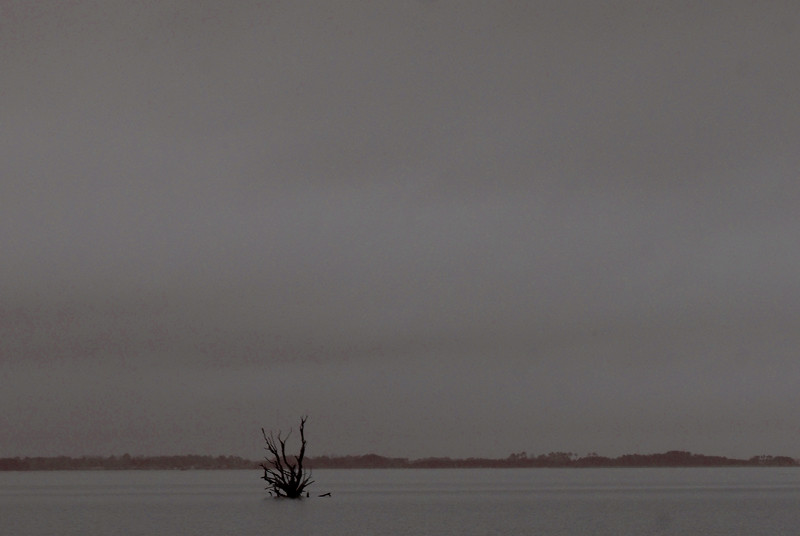 We put in for the night at Coinjock, NC, and  plugged her into the dock so we could run the electric heater to dry her out. After 3 days at anchor with those cold northeasterly breezes, she was, once again, a little wet below decks.

But this wasn’t the same deal as before, not at all! By this point we’ve developed a routine around keeping ourselves warm and dry (er) than on the trip down, and it helps that it’s not 24 degrees outside. Everything just seems doable again, making the whole experience just a little bit lighter.

We made Great Bridge, VA, by 1600, had an amazing seafood chimichanga sitting in front of us by 1800 and were out cold by 2000 hours. This is living the fucking dream! 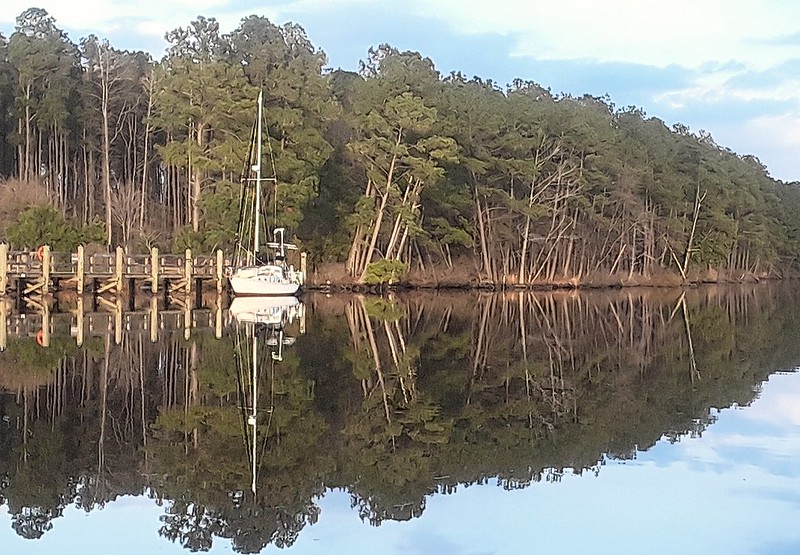 We’re feeling it at this point. All of our systems are working perfectly, the sailing is awesome, and we can see the end of another epic adventure!

…and the bitterness of returning to wage-slavery is hanging on me like a two centuries old lie. 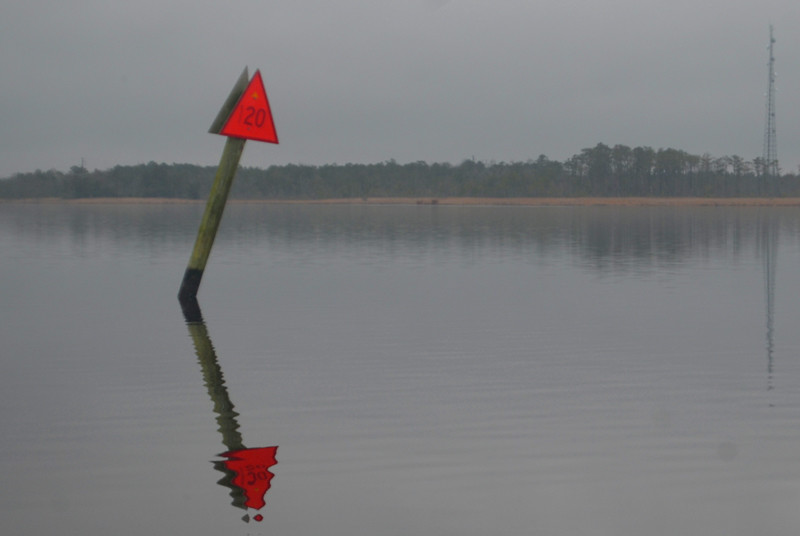 Then the sun came out again, and that’s always a cool thing! We sailed all the way around Roanoke Island then all the way up into the North River on this totally perfect beat, to reach to broad reach and finally a perfect 5 knot motorsail to Great Bridge and the only thing that was missing, the sun! 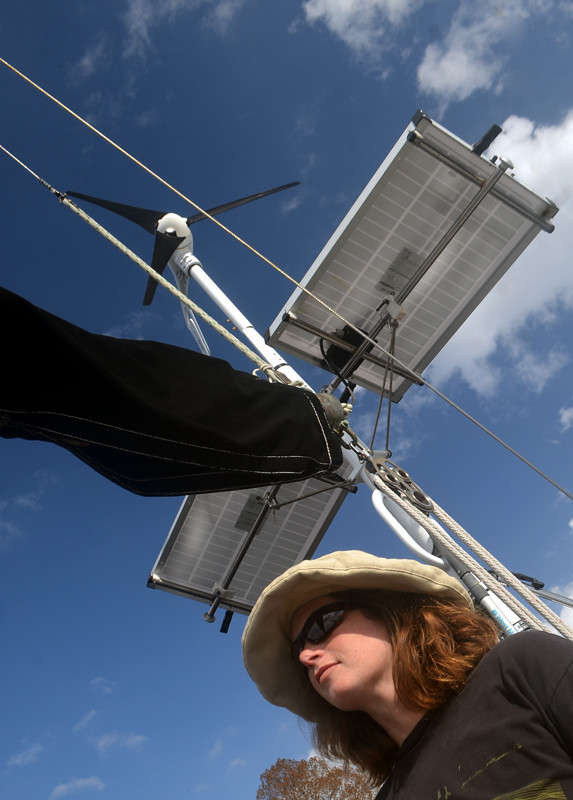 Hampton Roads is the scary central Naval Shipyard for the entire East Coast of the US. And one of the coolest things you can do as an old school monkeywrencher is to, very slowly, roll through that industrial nightmare/environmental-disaster, under sail!

…and that’s what we did y’all!

(Be advised, the best way to get fucked with by the Powers-That-Be in Hampton Roads is to take pictures of all the really cool top-secret tech that’s all around you while sailing through, so, rest assured, you won’t see any pictures of Hampton Roads in this blog, not this time.) 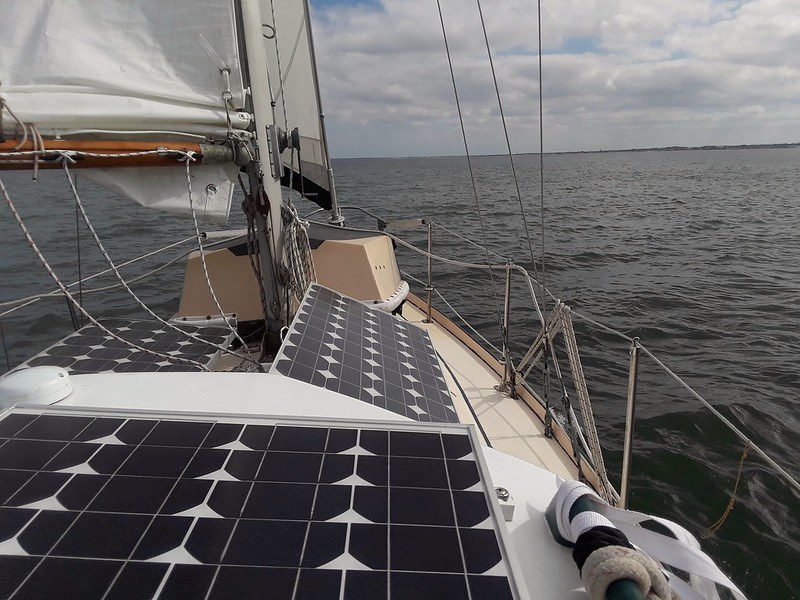 The wind was teasing us all day by being…

Coming around the Norfolk peninsula, we maintained a broad reach with a single gybe right at the Bridge/Tunnel to set us up for the entrance to Little Creek. The boat was in her element, the Chesapeake Bay, and she was acting like she’d come home to a long lost lover! The rig was powerful and high on the water while digging a trench to 6.5 knots with 2 reefs in the main and a full genny. This 1961 Philip Rhodes Chesapeake 32 was finally back in her home waters, and after 1100 miles of trudging the North Atlantic ICW, she seemed happy about it! 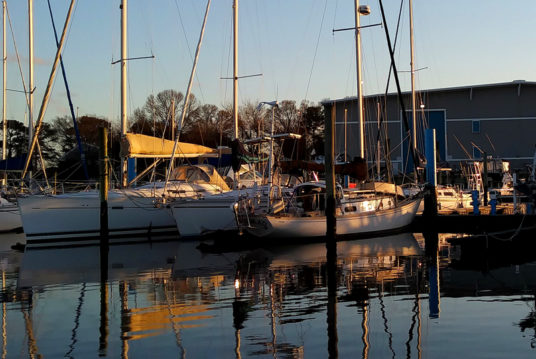 We made landfall by 1600 at the Vinings Landing Marina in Norfolk, VA, and said goodbye to the boat for a while, headed to Annapolis. We have to take care of some beeswax before stowing the memories of our winter sailing adventure for good. We gotta get some work done, some money made and quite possibly, a new boat under us before too long.