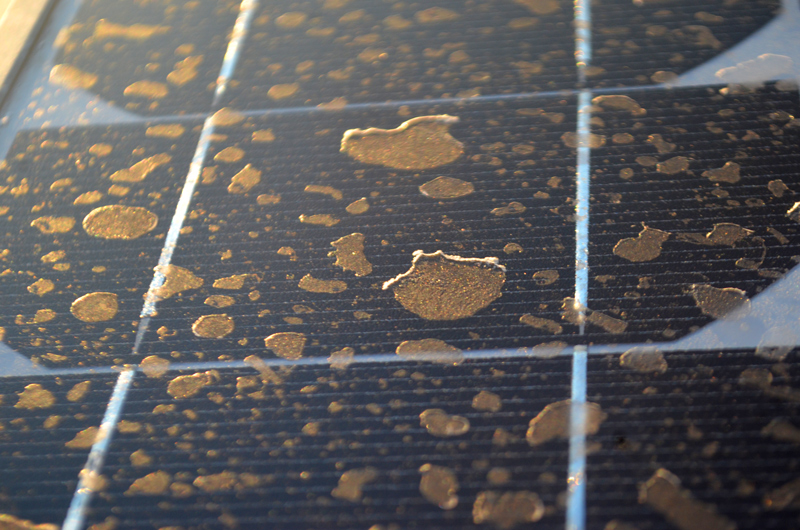 So we sailed up the Chesapeake Bay once again, in the early spring, and it was… 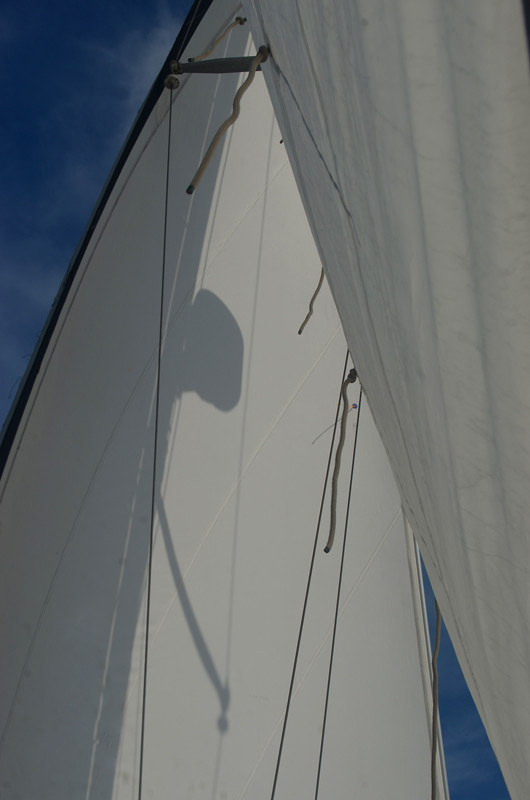 All the things to us. Once again… 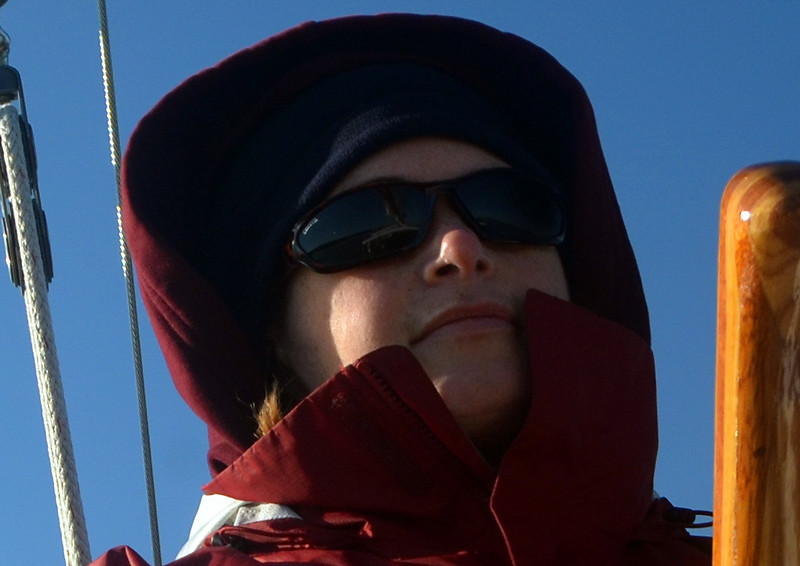 With an ambitious early start, we leapt from Little Creek to Deltaville, Virginia, in one long day that put us three days ahead of any of our previous slogs up the Bay in the cold.

Little Creek is Bay-wards of the Chesapeake Bay Bridge-Tunnel, so it’s not actually in the ocean. It is, however, the gulping throat of the bay, where the Atlantic crams itself in and rushes back out every 6 hours. The winds and tides are near-oceanic, plus a large portion of the East Coast’s shipping traffic enters and exits there.

Crossing Hampton Roads at its razors edge gave us as little time crossing the ship channel as possible, which was good, but it was still very, very intense! As we approached the channel from the south, there were 4 large ships in excess 600 feet directly across our bow. All the ships were traveling perpendicular to our course, so we were all doing exactly what we all needed to do to live through the day. Then, just as we were getting very close to the crossing point in the channel, a huge Navy Warship blazes out around Willoughby Spit doing 15 knots heading out to sea. At that point, the wind kicked up and I shortened sail so we could ride astern of the Warship as slowly as possible. As we approached the ship in the channel, the wind (of course!) started to gust, and I mean, hard! We already had 3 reefs in the main with the full 140% genny so I eased the sheet and pointed higher up to pull in some sail. Then the wind kicked around to the north and we hove to, just like that!

And of course that was the moment the warship hailed us on the VHF!

Oh yeah, Dena was down below all this time cooking fried-egg-samiches, so when we started to heave to I had to ask her to help with the genny. She stowed her work area, turned off the flame, and bolted above decks to deal with the flapping sail in her classic super-hero fashion (see above photo), stowed the sail and then went back down below. Thirty seconds later, she handed me a piping hot fried-egg-samich as we sailed abaft a 600 foot U.S. Navy Warship ! Yes!!! 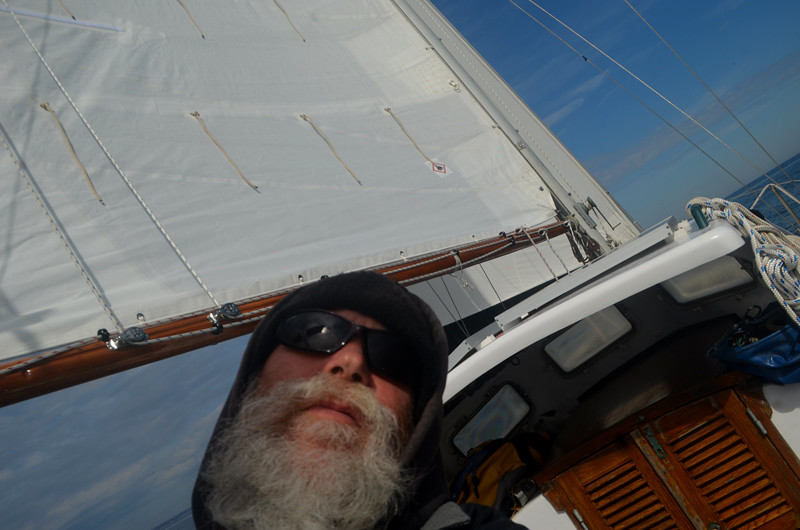 The wind rose and fell in its southeast Chesapeake lungs all day long but when we pointed up to the Rappahannock, it was like one long cold angry sigh all the way into Deltaville. 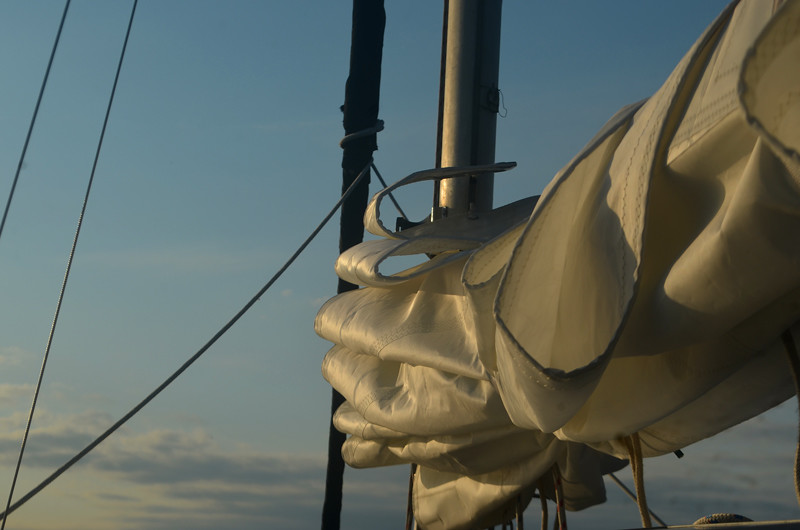 Then it was my birthday, a perfect time to binge-watch through another mighty Nor’Easter. 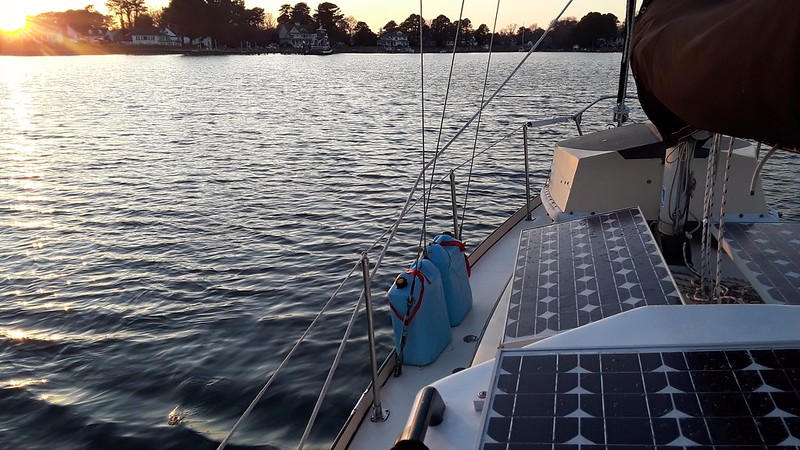 …And just like it was springtime in Maryland or some-shit. The wind clocked around and puffed us up the Bay to Solomons for St. Pat’s. 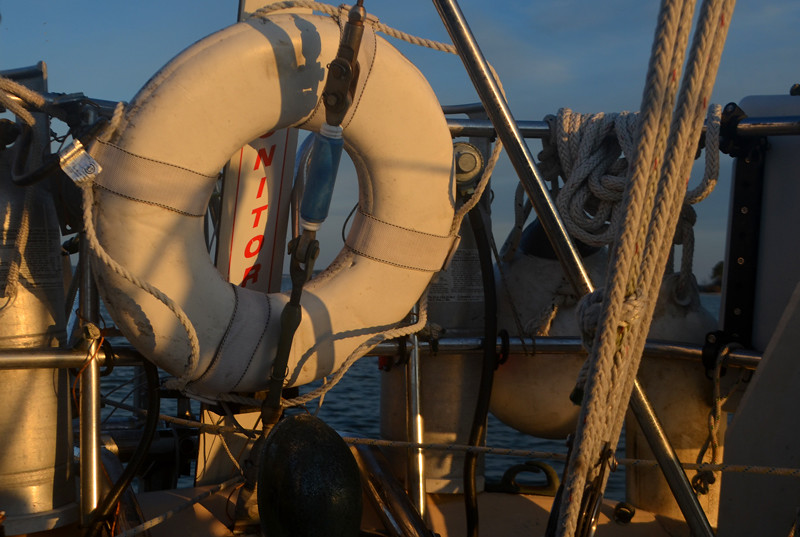 We spent the night on the fuel dock with the heaters basting and headed out as early as possible for the open bay.

And once again, not for the weak! We had 20 knots of fresh 40 degree wind from the northeast which put us on a hard beat along the Calvert Cliffs coming out of Solomons. The sun was crisp in the sky with not a hint of warmth as we heeled 15 degrees from our portside. Dena took the first watch out of the protected creek and I took over partway down the Patuxent River, but just as we came out into the open Chesapeake Bay it got real. The ebb current had blasted us down the river, and the NE wind had filled our sails to bursting…while we were heading east. As soon as the cliffs stopped protecting us and we turned further north, our speed dropped like it was hot and we started hobbyhorsing against the wind waves and swell. Engine on, sails straining, Dena pulled one reef, then a second, then disappeared belowdecks. I hunkered down to the job at hand and, just as I was settling in for a long hard cold painful beat, Dena came abovedecks and yelled above the din, “Fuck This DAY!”

As usual, we have no pictures of the worst bits.

But…we turned back for Solomons and it turned into a glorious sailing day. We tacked a few times around another boat that was sailing in the protected part of the river, then the cold got to us regardless and we headed up-creek to our usual anchorage. 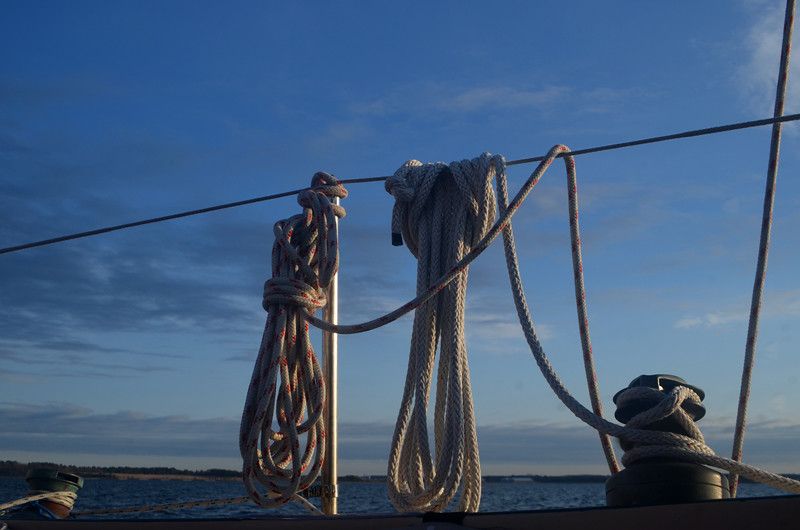 Tinker (the dinghy) hadn’t been off the deck since Oriental, NC, but she splashed without complaint and we rowed in for Thai food. (Recommended if you’re in Solomons and not looking for the Chesapeake seafood experience.)

The next morning, we left at 6am and trundled down the creek in the dark. Between radar and local knowledge, I (Dena) was only mildly tense about not being able to see for shit. Besides, any kayakers or paddleboarders were waiting for a much, much warmer morning.

The sky lightened fast and by the time we were well into the Patuxent, we got a gorgeous morning show. 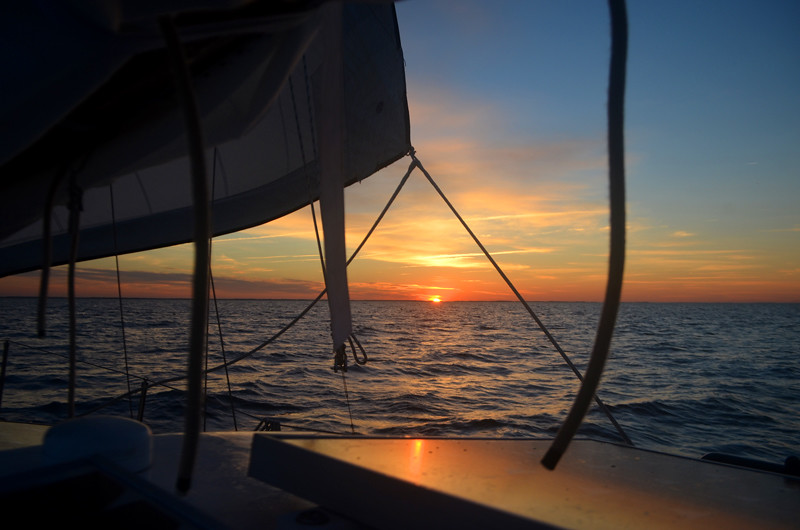 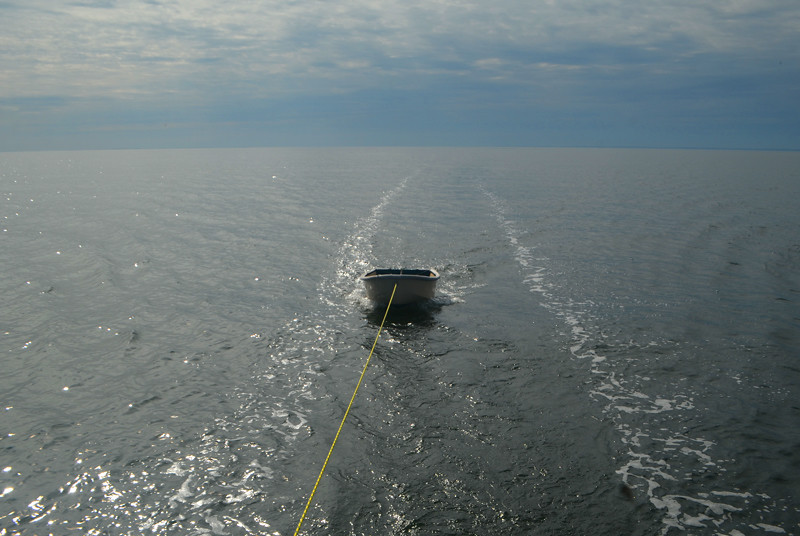 Unless you’ve never been to this website before, you’ve probably seen something like this already. We like Tinker, even when it’s just following us. Look – that’s how we get to land! So cute.

We didn’t have the option to wait out any of this weather because of two factors. One, I (still Dena) needed to be in DC for a presentation on Tuesday, and it was best for all concerned if we were in Annapolis that morning so we could do some last-minute prep. Two, the snow that was coming. 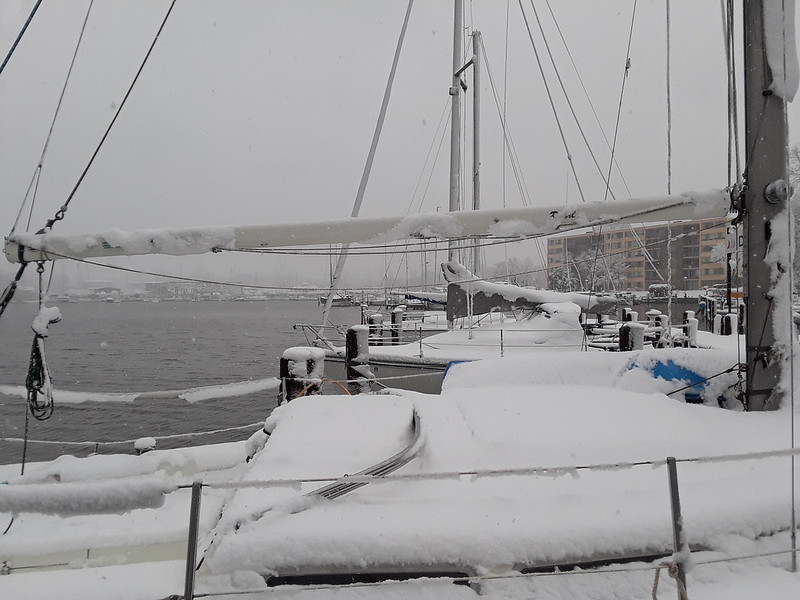 We’d been keeping up on the 10-day forecasts for weeks, looking for the opportunity to jump back down to Norfolk and bring Nomad north. We saw a sliver of a window and took it, but there were two bad-wind days in the middle and snow at the end. Another new meteorology term that didn’t scare us because we made it. It was safe and warm and fast and also hard and cold and exciting and also, finally, safely behind us. Back on E dock, plugged in with heaters blazing, we sat out a snow day like school children, excited for the unexpected day off and shocked by the post-equinoctal snow. 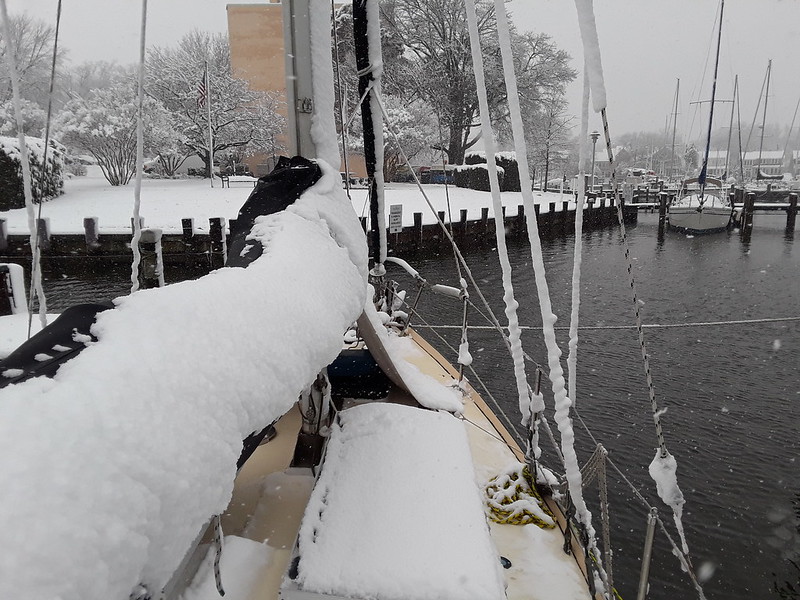 Another week of north winds and cold turning into south winds with rain have us dancing with glee that we took that window. Who knows how long we would have been stuck in a ridiculous apartment with rented furniture had we not simply grabbed our opportunity.