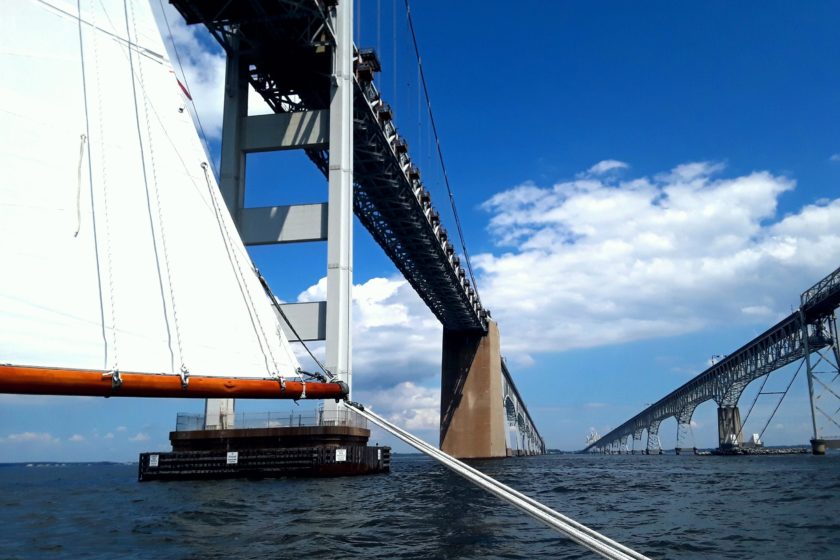 A week ago today was Retirement Day. 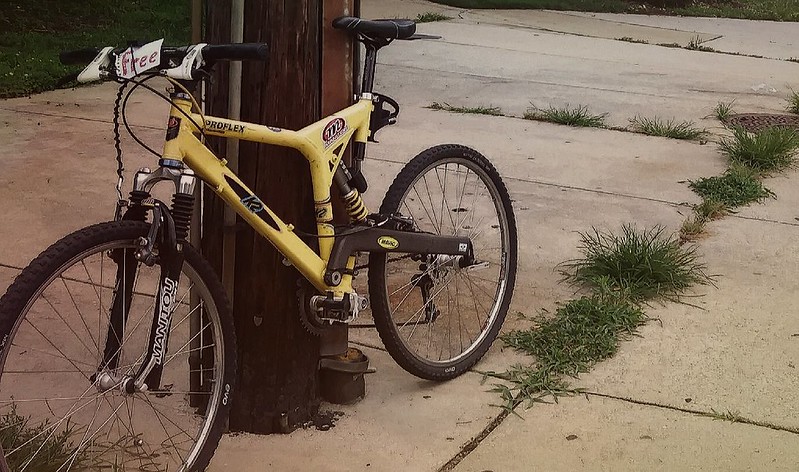 From there it was a last visit to the gym for showers (made less luxurious by a broken steam room, and yes, first world problems), topping off the water tanks with the last few gallons, coiling the hose and shore power cord, and releasing ourselves from the web that had held us in slip E05 at Watergate Pointe Marina, Annapolis, MD.

To get to that point, we’d both put in a flurry of 40+ hour weeks at the paying jobs, completed the edits to the Southern Waterway Guide, finished Kiwi-Gripping the deck, replaced the old and worn gypsy for the windlass, rebuilt Flo, painted the forepeak…oh, and in the mix was a reading in NYC for Dena and James’ trip to Truth or Consequences, NM, for a one-woman show begun 35 years ago while the one-woman’s daughter was dating James – also a part of that aforementioned web. 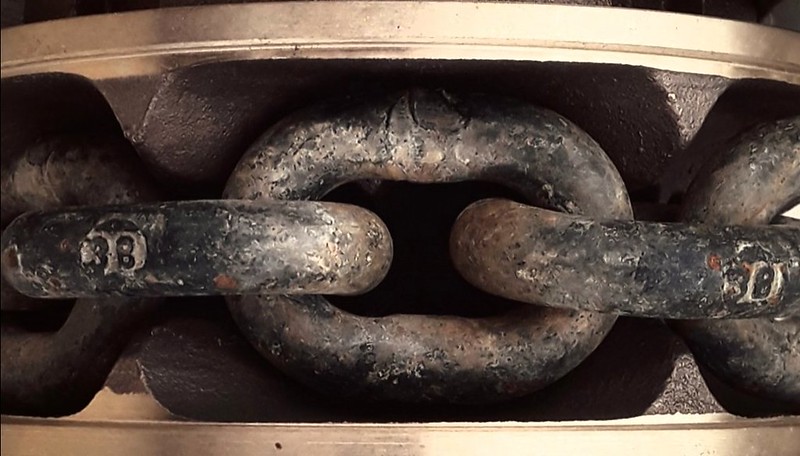 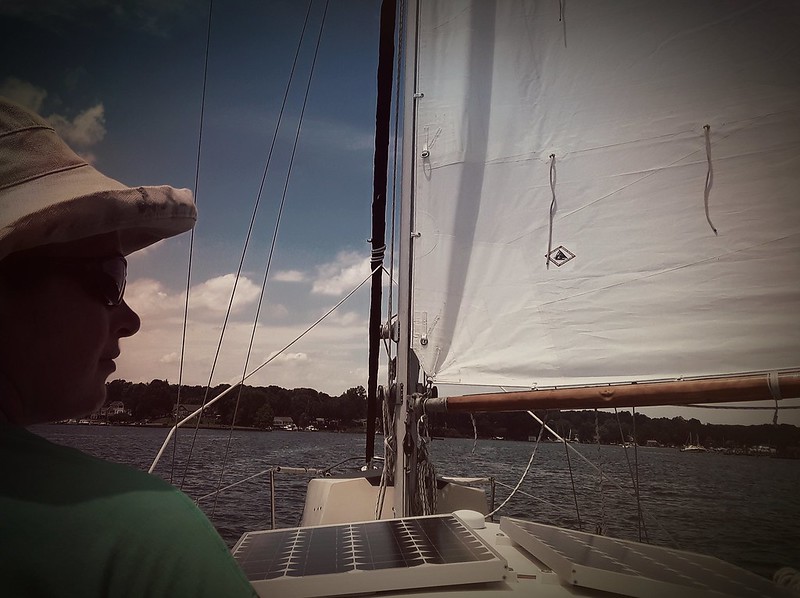 After being all bound up in these jobs and doing the right thing and getting all freaked out over that stupid shit, we sailed to Mill Creek, like we do, a familiar destination, the boat practically drives itself there. It doesn’t, of course, but it doesn’t take much thought or planning for us to do it. We’ve anchored there 5 times now and that’s what’s called local knowledge. 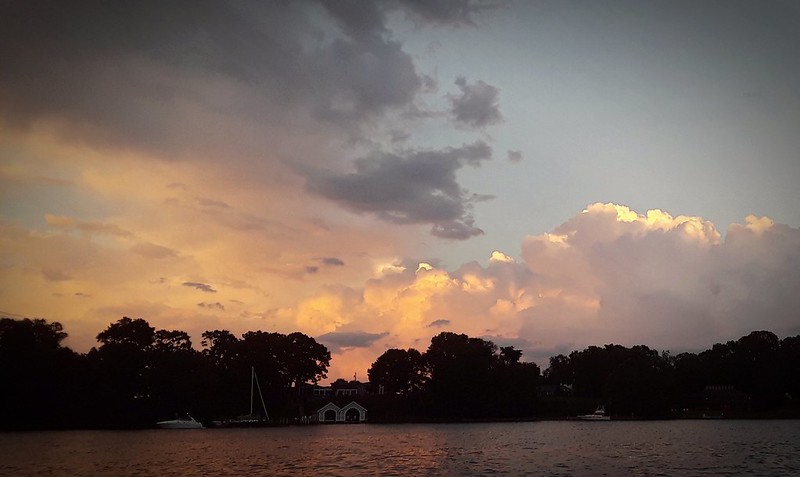 We went to Cantler’s on the busiest day of their week at the busiest time of day (as the Goog helpfully informed us afterward)…in their busy season. It’s not a stretch to imagine this being the busiest hour of their year.

After getting a beeper from a monotonal teen, we looked around and realized we were in hell. There were bitter individuals picking at plain salads, forks stabbing at the room’s underlying rhythm, while glaring at their family’s matching-polo’ed, serious faced, silent, Olympic-level crab-picking squads; others eating snow crab and bitching about it’s lack of freshness; and still others who hammered those poor desiccated bottom feeders relentlessly, pounding them to pumice to the beat in fits of Einstürzende Neubautenian blue crab psychopathy. It wasn’t a restaurant; it was a medieval battlefield late in the day, steaming with the effluvia of countless dead. The 8 live crabs down in the holding pools of death skittered in fear, but they were all destined for the pot.

We abandoned the battlefield and returned the next day. (Monday, 1:30pm, is a much better time to visit, in case you were wondering.) We don’t have to talk about the dude, left over from the previous day’s carnage, his gaze fixed and his hands bloody from hammer misses…

That evening’s Nomad Dance Party and the recovery therefrom took a night and a day. James thoroughly cleaned the boat, including the black streak he put on the bow pulling into Myrtle Beach back in January. I (Dena) ate saltines and drank ginger ale. 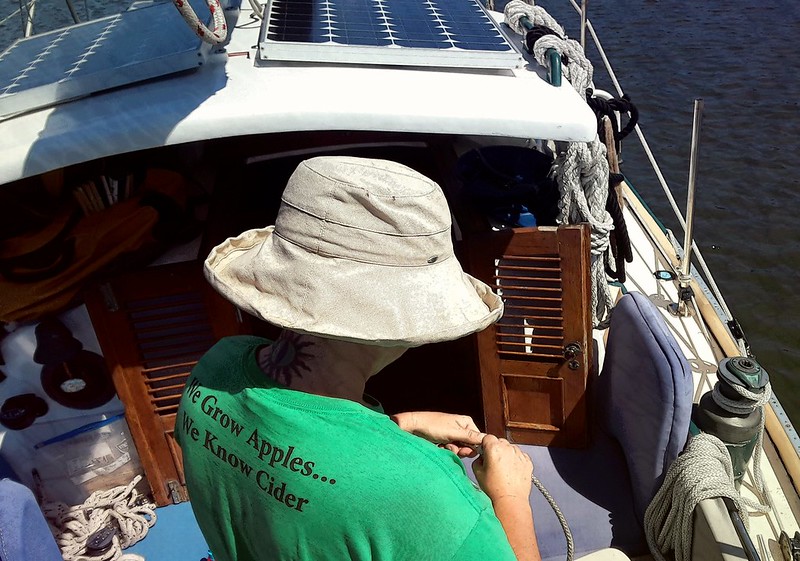 But the next day I was better, and I flipped the lifelines end for end to change the chafe spots while James set up the Monitor lines. 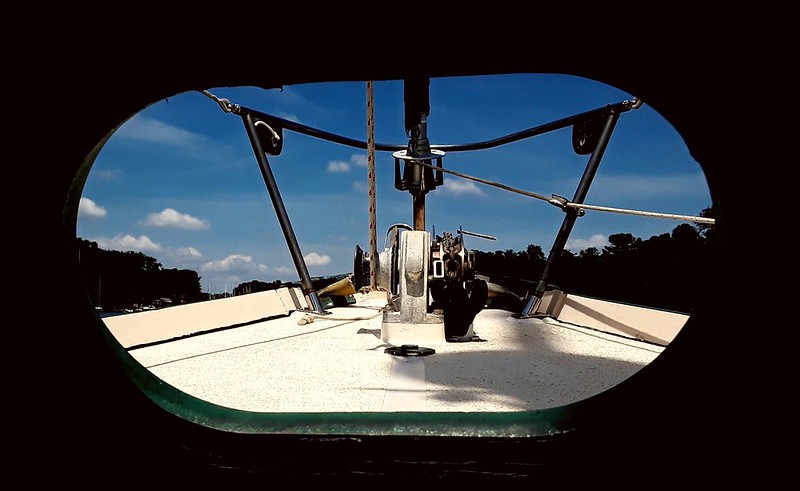 And all the time we were both screaming quietly, “This is real life!” Back to the good stuff, including a day of storms… 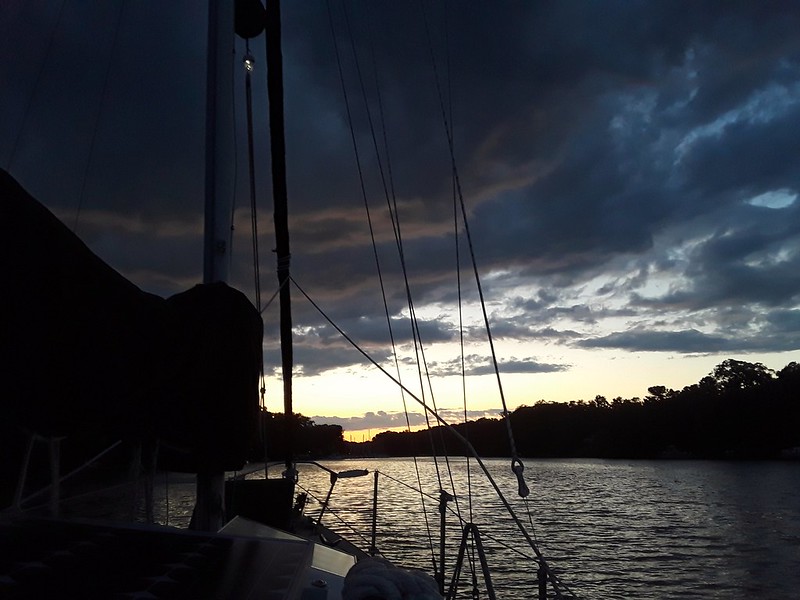 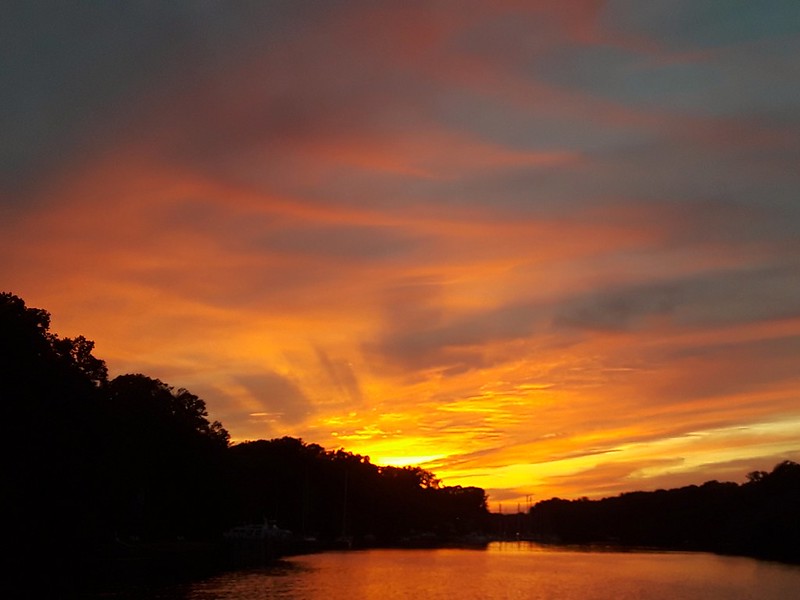 Four days, we sat there recuperating from four months of seductive, well-paying wage-slavery, re-familiarizing ourselves with being at anchor. Grooving on each other and getting back into this thing that we do.

From Mill Creek out to Whitehall Bay, then into the Chesapeake and under the Bay Bridge, wing-on-wing. 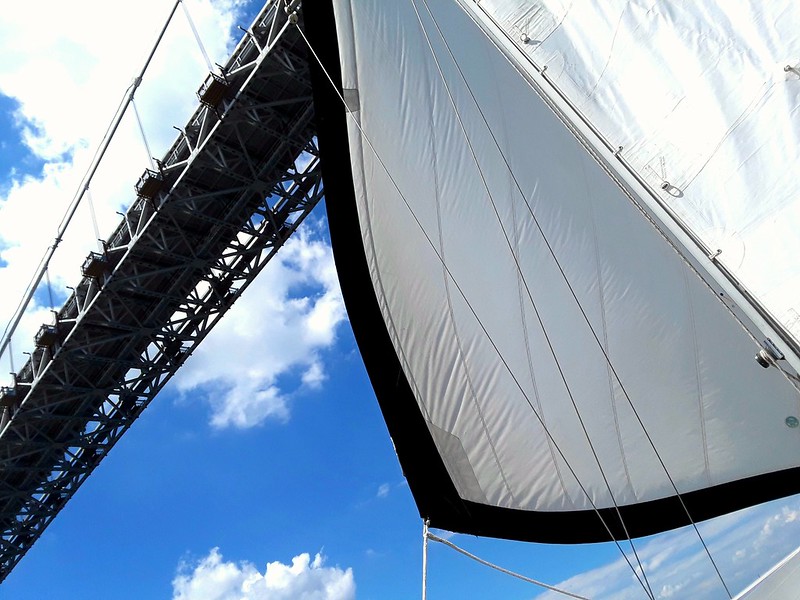 We’re exploring for the Waterway Guide again this year, and this is one of our territories. We first sailed from Hampton Roads to Baltimore in 2010 and we’ve been here, back and forth, again and again, coming through as more and more experienced explorers. Now, we’re traveling this area (the west and north coasts of the Maryland Chesapeake) slowly, with an eye to helping new explorers discover this place that has drawn us back time and time again.

You can’t underestimate the selfish slant here. When we were new, we really needed the kinds of information that we’re going after this time around. The first time we came through here, we needed exactly what we’re gathering now. We’re going to hand it to the people who are not-us, but who partake in this life and this version of the world. And for those former selves, who really wanted to know where it was okay to anchor in Baltimore.