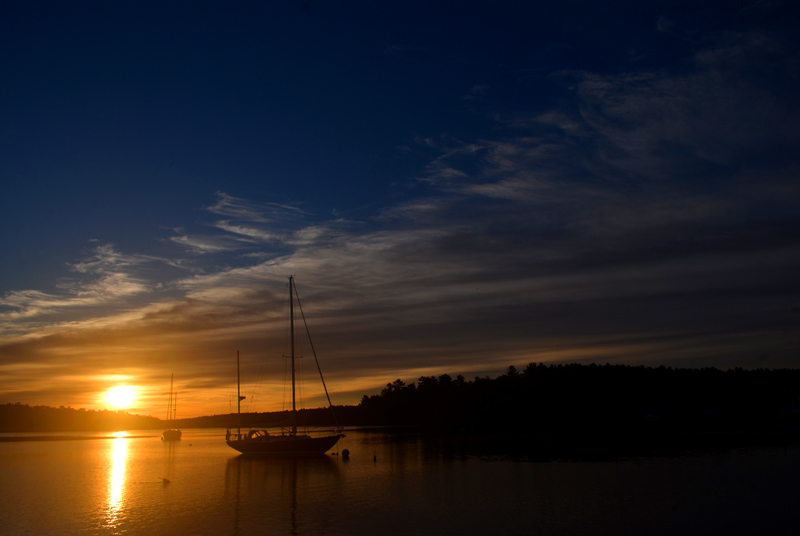 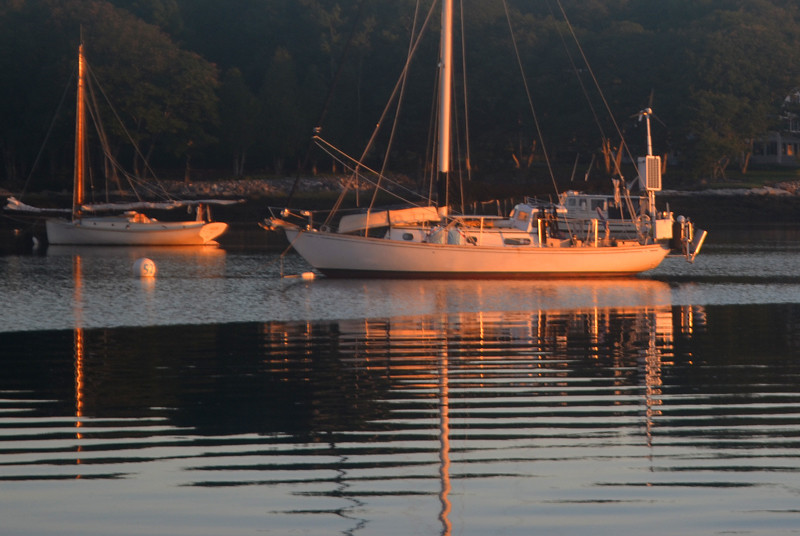 Watching Nomad ride to her temporary mooring (DrEd being back in Cali to caregive a surgered mother before taking her into her new life…the boat, not the mother) gave us a liminal period. Mourning, farewelling, learning, adapting to the new…whatever it consisted of, it was both important and finite. 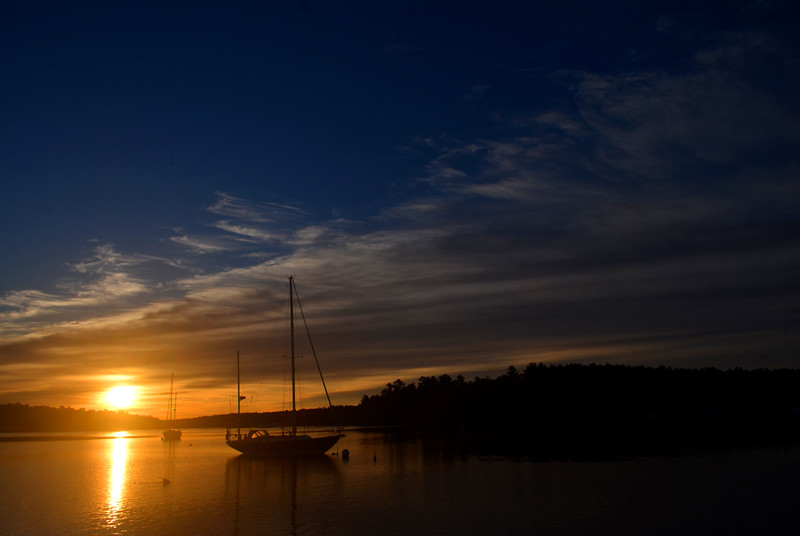 One bright fogless morning, we left Robinhood Cove aboard our new Baba 30, Cetacea. 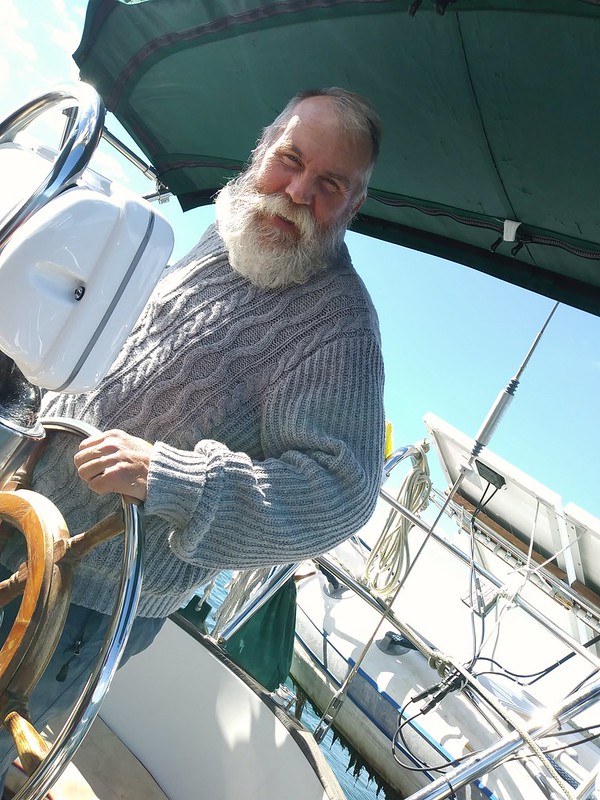 A boat that came with an inflatable dinghy and 4-stroke outboard motor, both of which we will store until they’re valuable again in the spring and then sell without a qualm. Git thee hence, Satan! 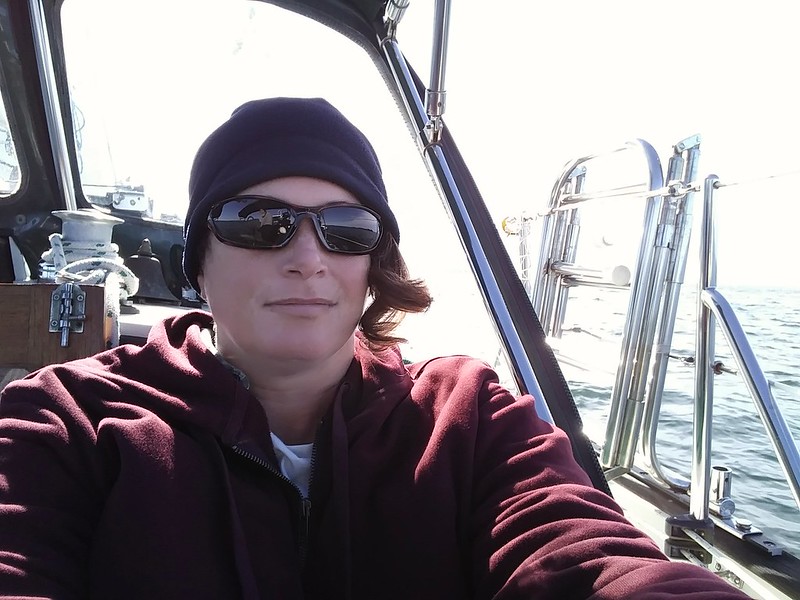 Maine in September isn’t bitter-cold, but it’s cluing you in on the eventual plan.

A gorgeous-easy sail down the Sheepscot took us back to Seguin Island, where we lastpartied with the S.V. Exit crew, now down near New York City for a stopover before the Chesapeake and then points southern. 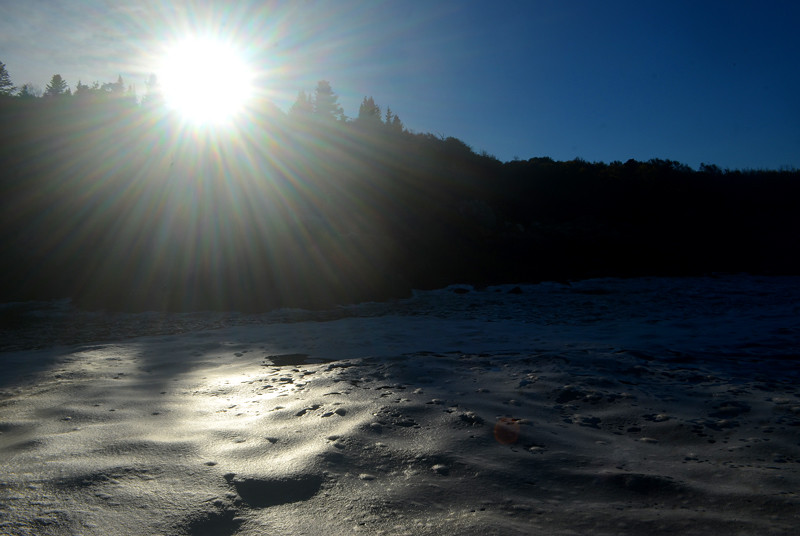 A good boat is good in the bad, too, and our first night out of our new boat’s homewaters was…not good.

The swell broke over the rocks at the mooring pocket and then the wind turned yet farther north. Something on the bow keened and I (Dena) went out on deck in the moonlit middle of the night. The bridle the PO (previous owner) had created was fucking everything up, but when the bowsprit dove into the white water, I analyzed my chances and decided that not-sleeping for the noise was better than creating a weakness in the system, a system that didn’t need to include me. “Come back down to bed!”

The next morning, we left at first light. James released the mooring on the pitching bow and I powered into the wild waves until I could turn west over Ellingwood Rock, after which the seas became following and fine and James pulled out the staysail and we were doing seven in-control knots and we threaded the needle(s) into the quiet and peace of Quahog Bay.

Quahog (Ko-hog) Bay was fog and rain. And some wind. And it was actually rather gorgeous, but… 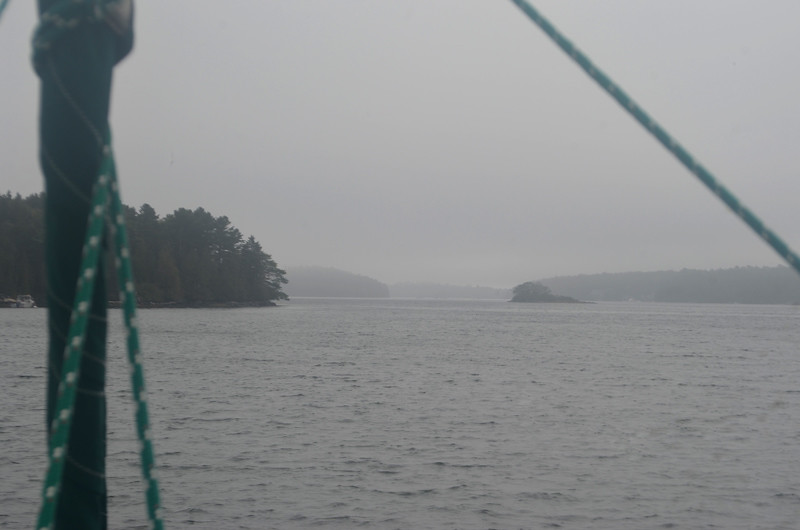 On a brightening afternoon, we took the blatting dinghy for a ride (why not, they’re only dinosaurs!) around the Snow Island neighborhood. The area is called the Calendar Islands because there are so many, far more than 365, even if you don’t count the ones that go underwater in a storm surge.

Ben Island and it’s smaller cousins to the south provided wondrous possibilities for camping (nope) and vertical interest like a motherfucker. I (Dena) missed that greatly in the Chesapeake. 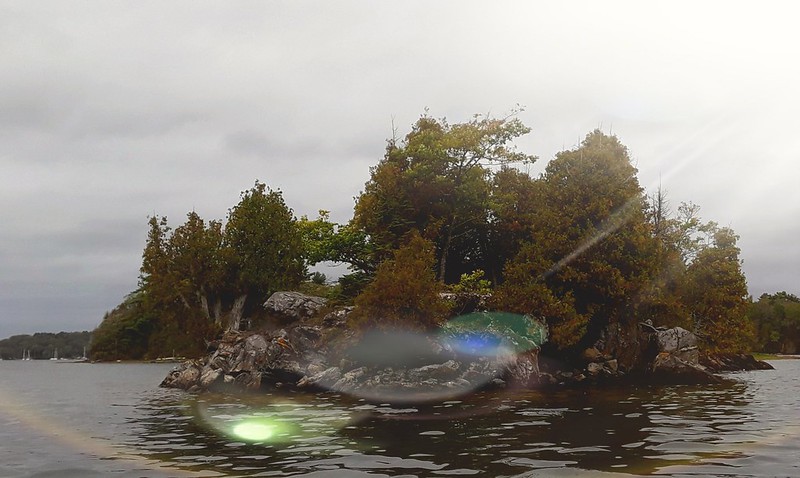 The south end of Snow Island is decorated by a doll’s lighthouse complete with wooden mermaid lounging on the rocks in front. 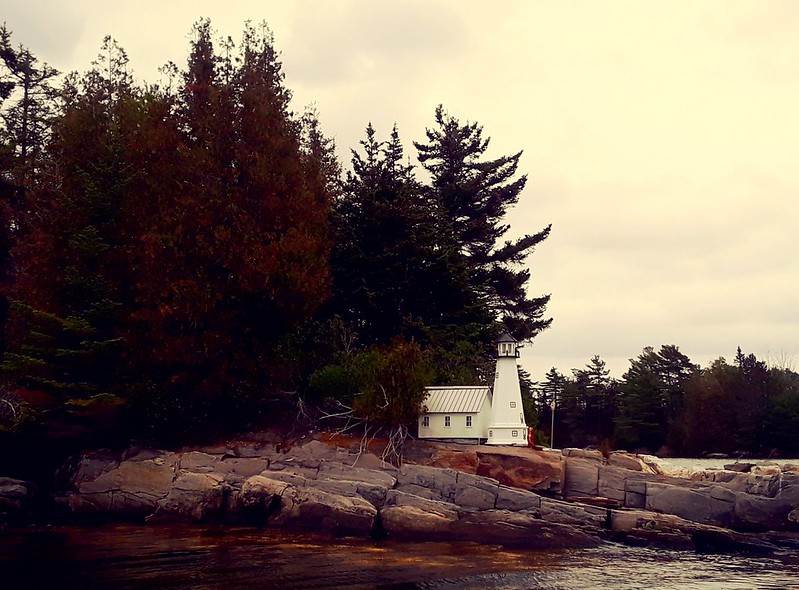 Several days of chillin’ through rain made us more than ready to get underway. A motor-sailing day took us around Jaquish Island… 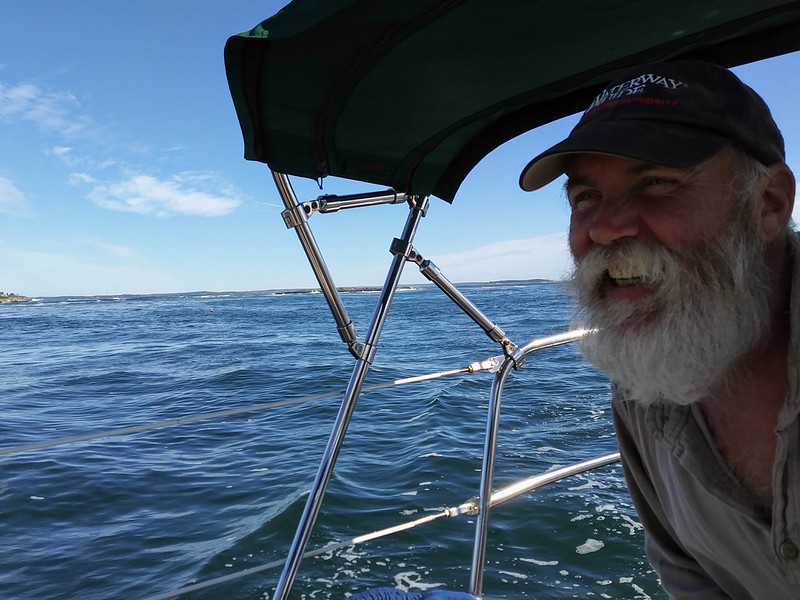 Where the surf broke incessantly in great green curls. After Turnip Island Ledge (these are Mainers after all), we threaded the gap between Haskell Island and Potts Point to enter Potts Harbor, on South Harpwell Island’s westernmost finger.

We debated about anchoring or picking up a mooring so’s we’d have showering privileges, and showering won the day. 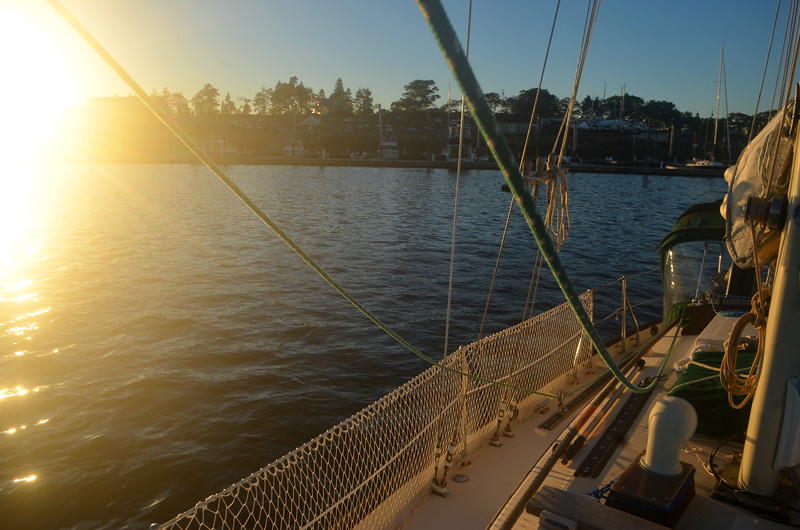 Dolphin Marina is the only 5-star marina rating we’ve ever given. Delicious blueberry muffins and coffee brought to the boat in the morning, a decadent rain-shower with plenty of hot water, seafood meals to make a mariner weep (or nosh) with joy, and a couple of guys working the place who were frickin’ amazing, given the marina was officially closed for the season during weekdays… 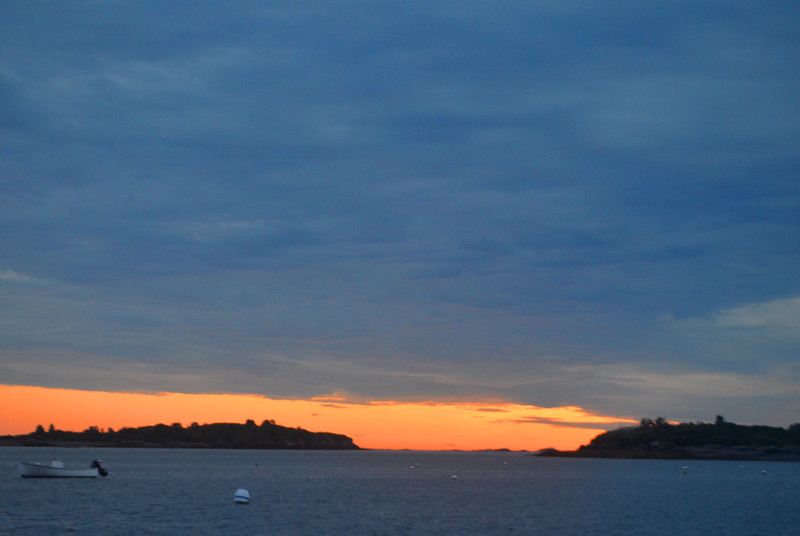 But really, it’s those views. 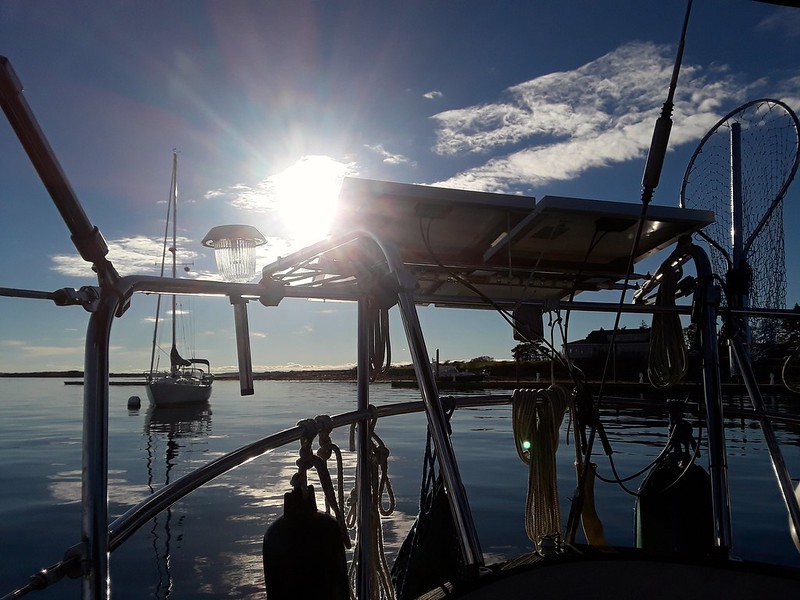 How does a marina provide sweeping views of the Calendar Islands without opening the boats up to unendurable surge from the ocean? I have no idea, but I am glad for it. 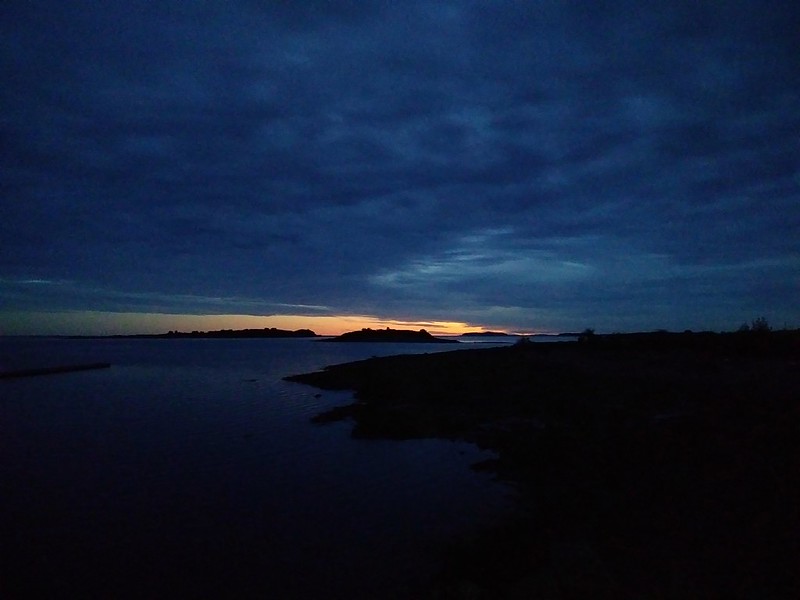 We also got some great views of our new boat, and some props from the wooden-boat guy who rowed a pram out to his Atkins ketch. 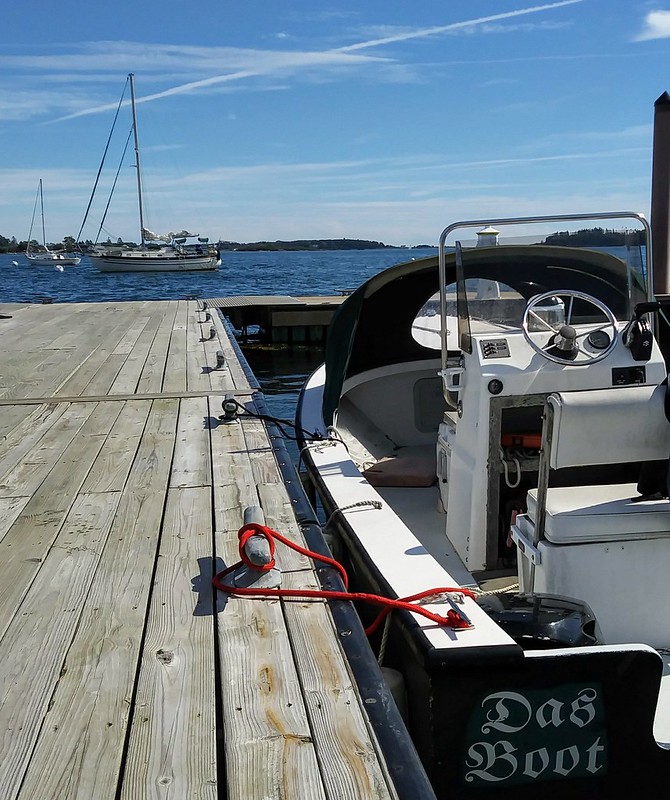 But even a couple days of decadence couldn’t compare to our first real sailing day on our new boat. 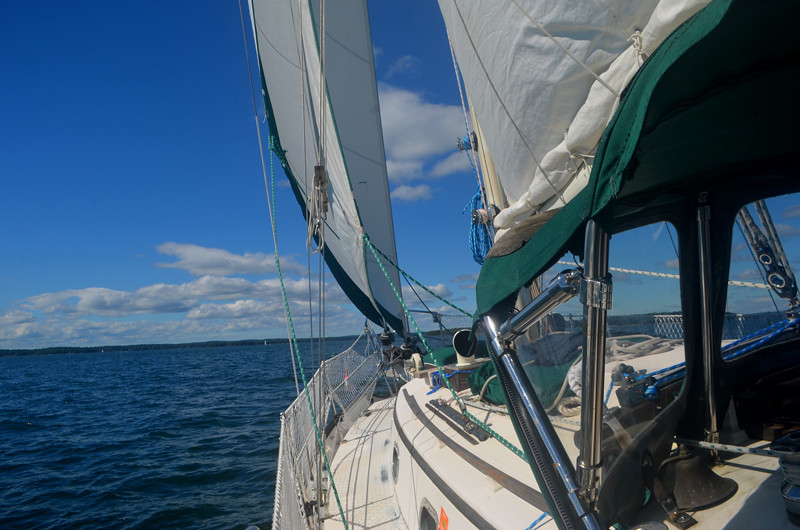 Bear with me, here. If you’re not a boater, you may not know what’s so amazing in the shot above.

On this blog, that’s a whole new picture, familiar as this may look. 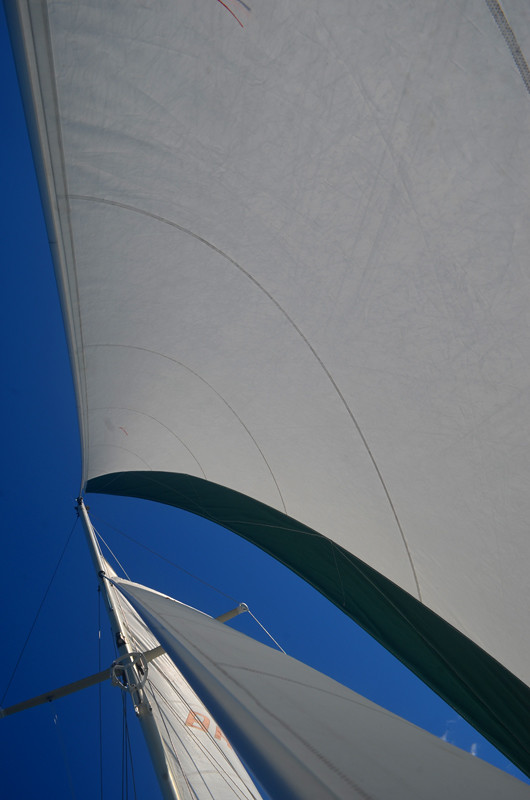 We sailed down around Little Birch Island and then tacked. Rather than heading at (or east of) Whaleboat Island, we made that tack so tight and clean that we skirted the western shoreline and held that tack until nearly even with Whaleboat Ledge. 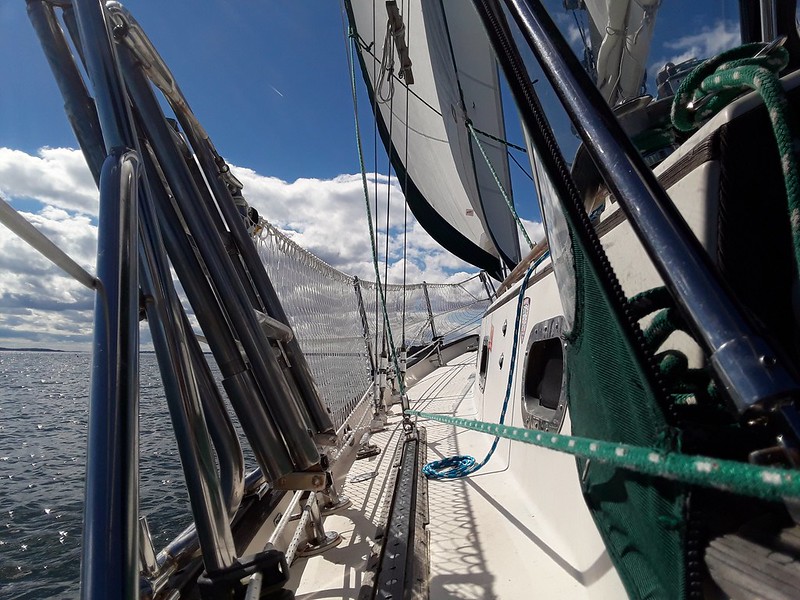 The next tack took us over the northern point of Great Chebeague Island and into the gut between it and Littlejohn Island, where flashing red nun “18” marks the northwestern edge of a mean shoal. She bit into the wind and headed for Littlejohn, then lost her umph and the current sucked us south toward the shoal. The wind freshened, sneaking between 100-foot high, wooded peaks, and we surged again on the right path. We passed the nun about 15 feet off the port side (no need to push off with that boat hook, yay!) and celebrated by bearing off a little down Cousins Island.

We did need to go around, though, to pass The Nubbin and put the hook down in Broad Cove, so we tacked and tacked to bring us through the Saturday parade of motor-sailors bucking the current to get home. Just safe of the shallows, a small sailboat’s person gestured cryptically. James waved.

The VHF crackled and we were hailed. All formalities crisply observed, we ended up on channel 79 to receive the following message. “I just wanted to say that she looks absolutely beautiful. What kind of boat is that?”

To which, my (Dena’s) laughing reply was as much about my excitement at the unlooked-for compliments as about Mr. Perry’s design or TaShing’s naming conventions. 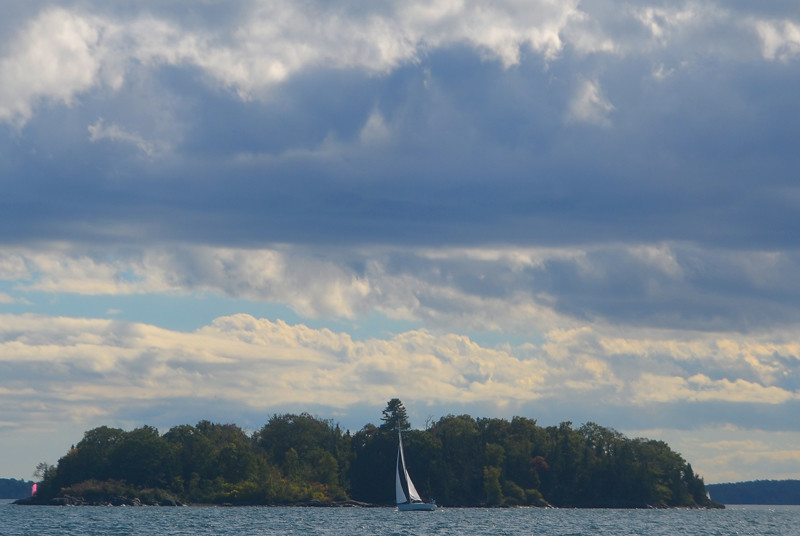 The water was flat, the currents complicated, and the wind veered and clocked about 30 degrees throughout the day. We prevailed through uncertainty and gloried in the strength and stability of our sea-mammal, more graceful through the water than we could ever be in our own lonely skins. 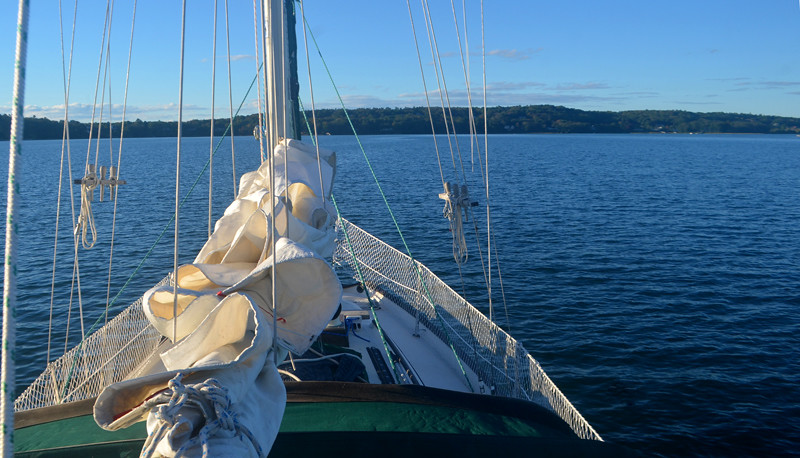 And we settled in Broad Cove, where we’d anchored Nomad twice on the occasion of heading up the Royal River and on the much-happier occasion of leaving it two weeks later with a repaired deck and a mast that was no longer falling through.

Of all the systems we plan to improve, the one that impinges most on the current adventure is the lack of sufficient anchor chain and a proper snubber. So, of course, some “he’s a nice-enough-guy”, oblivious, m-fer in a sea-borne version of a pickup truck comes rolling up on us while dinner’s on the hob and suggests, in so many words, that we may have anchored too close to some rocks “you can’t see but they’re there.”

We’re good. Even with a not-quite-sleeping-through-a-storm ground tackle system, we’re not going to anchor where a gentle breeze and soft swell can put us on the dog-gam rocks. 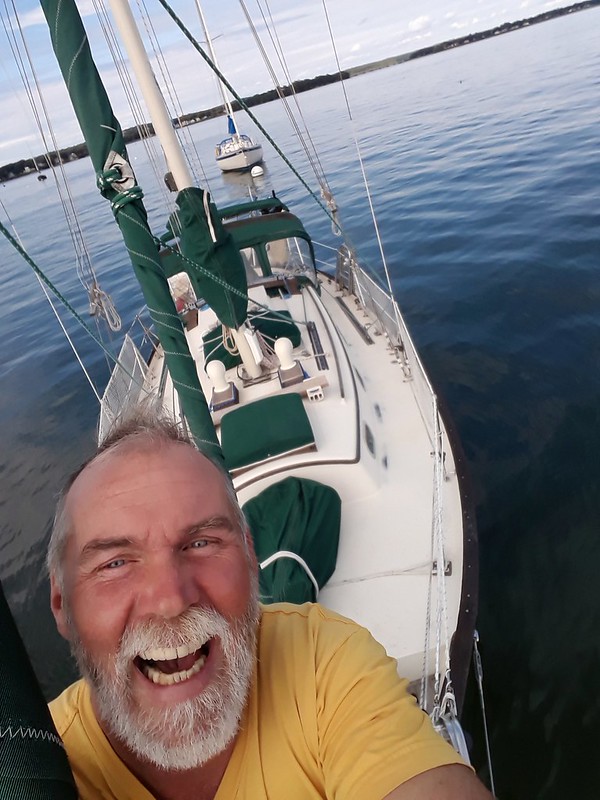 No wind to Portland, Maine, but we poked around a bit and found the absolute best anchoring spot off the Eastern Promenade.