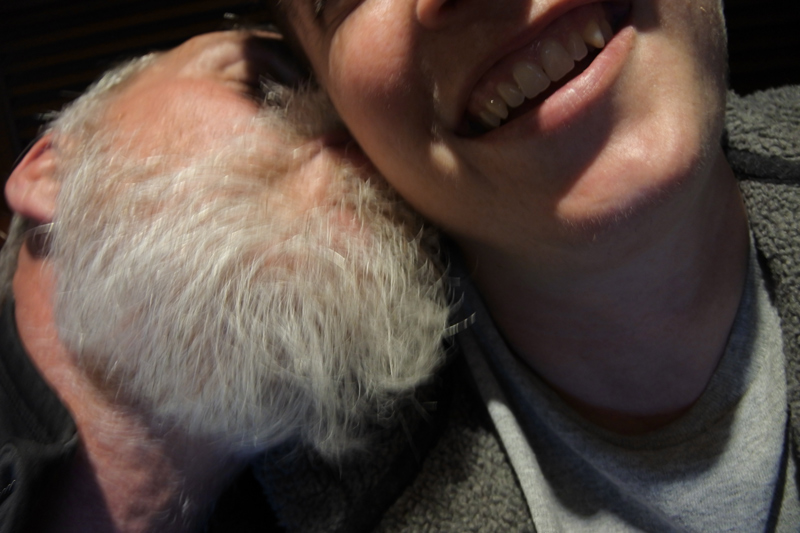 The shake-down cruise is a test and S/V S.N. Cetacea was working well. The electronics were brilliant and all of our recent upgrades were performing perfectly. And then…

Look in the lower left corner of that image. The triangle shape in the water is an AIS signature – a boat approaching from behind.

We left the dock at DiMillo’s at about 15:30 pm and headed for Cliff Island so we’d have a nice straight line to the mouth of the Cape Cod Canal, a very ambitious goal. (Not that we have goals, or plans. Just…thoughts. Never itineraries!)

The approaching attack-RIB gave us both a jolt of adrenaline–which is what being boarded is specifically designed to do! The first test is your reaction to the command, “Prepare to be boarded.” Since we’d just repacked the lazarettes, our safety gear was right at hand. A little adrenaline meant nothing but alertness, really.

They asked if we could safely maintain our course and speed and I (Dena) replied, “For a while.”

Just as we were getting used to the idea of being boarded, as we were turning to the job of adding lubricant to the situation…That’s when they announced the dog.

A black Czech shepherd named Buddy was the first aboard. He nosed around and scrabbled(!) around the gel coat and wooden decks. He left hair everywhere and found nothing he’d been trained to alert for. I wonder what that list looks like.

Buddy shoved his nose into our bed, our head, and our galley, and got a great big slobber mark on our brand new Simrad. He did not, however, scratch it with his nails. Good job, Buddy!

Enough of Buddy. Needless to say, everything was fine. As you can see in the photo, everyone had a good time. We were the veterans there–they were largely new and one of those young men had never even been on a sailboat before. We chatted about the last time we’d been boarded (off Oahu, between Ala Wai and La Mariana, May 2007). They wrote up the visit and left. Done deal.

That little jolt of adrenaline proved that James truly was sick. After they left, he descended quickly. By the time we were safely anchored, he was ready for bed. Cuddled down through the rain was a good start on healing, but the boat got colder and colder.

Looking at our options, we decided to strike out for Dolphin Marine where we hoped to use the courtesy car to refill the propane tank. Ahem. Yes, we left without filling the propane. Not proud of it, but it’s a fact, and when baking is the major source of heat for a boat…propane is important.

We motored over and pulled up on the fuel dock (but down a ways, in case).

No one was around, so the whole sitch was iffy. A Great Dane mix and a black lab mix greeted me at the top of the dock and followed me around for a while.

Our boat was the only thing happening at that marina. We’re out there looking lonely, but that’s how we like it, we’re Shoulder Season Sailors!

A woman strolled down late that afternoon and she was marina affiliated by marriage. She said we’d be fine there but couldn’t help with power. That left us tied up to a dock for no reason, because no propane and no power means fuck this dock! Except…

Early the next morning, though, a nice young man told us we could use the car up at the restaurant. “Keys are in it,” he said. So yeah – we got propane and picked up some eggs while we were at it. Also some more meds for James, who was still really not okay.

This place wasn’t the answer. We had the answer! Being at anchor, being underway…that’s the answer.

That night, we decided that James must heal. We’d go (back) to Portland and get a transient slip and warm the boat and get him well. So we woke and had coffee and left bright and early. And instead of going (back) to Portland, James turned his clearing eyes to me and said, “What if we kept going to Kittery?”

Past Portland Head Light from miles away, the place we took Kate during a winter storm to experience the rhythmic flailing of water against rock. 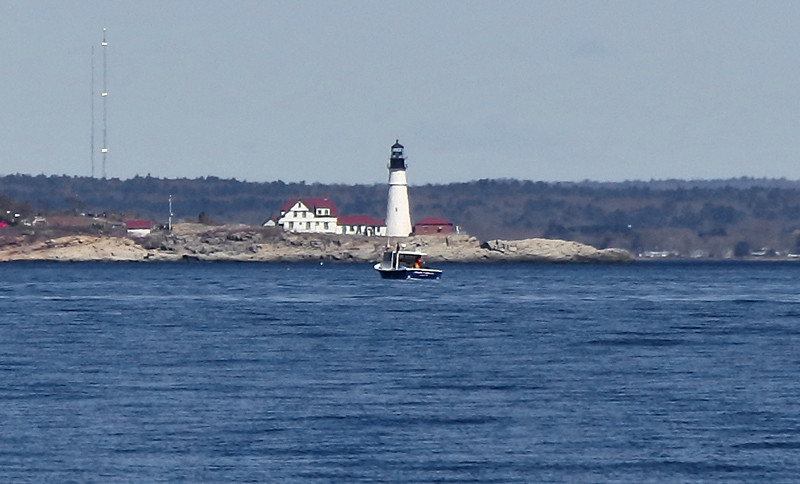 With a second reef in the stretched-out main that worked, as ad-hoc as it was. 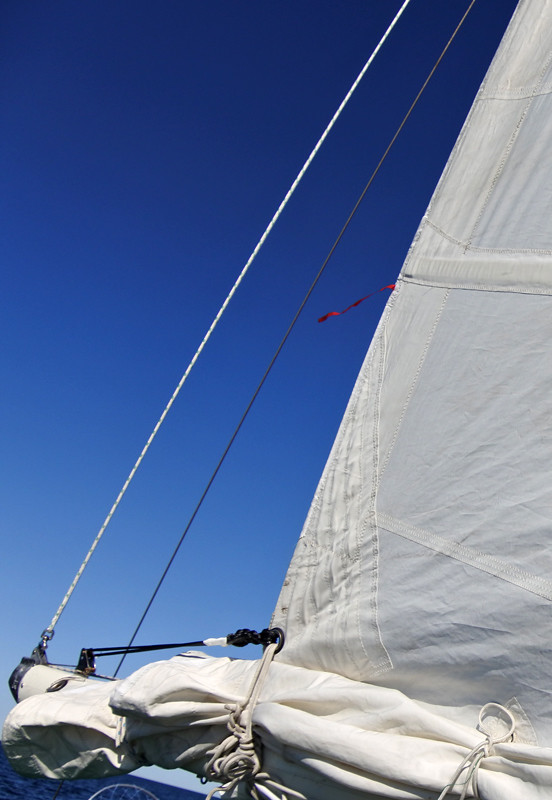 Past the Nubble Light on Cape Neddick, a photo of which went to space on the Voyager and may well be part of our galactic first impression. 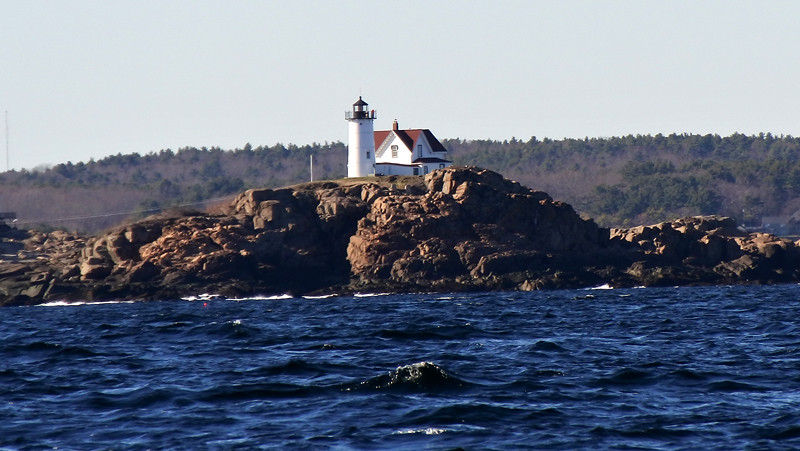 Along the way, we decided to go to Portsmouth, New Hampshire, not Kittery, Maine, simply for that reason, we wanted to be out of Maine! I know, it sounds a bit petty, and believe me (James) it is when the land in an offshore adventure is so very insignificant compared to that incredible ocean, the Atlantic, which is part of that body of water with literally no end on this planet.

Our tools worked. Our installations held. Our main looked decent and the staysail, oh! Why have we gone so long without a staysail?

And then we rounded the northern edge of the Piscataqua River, rounded the Whaleback Light, which… 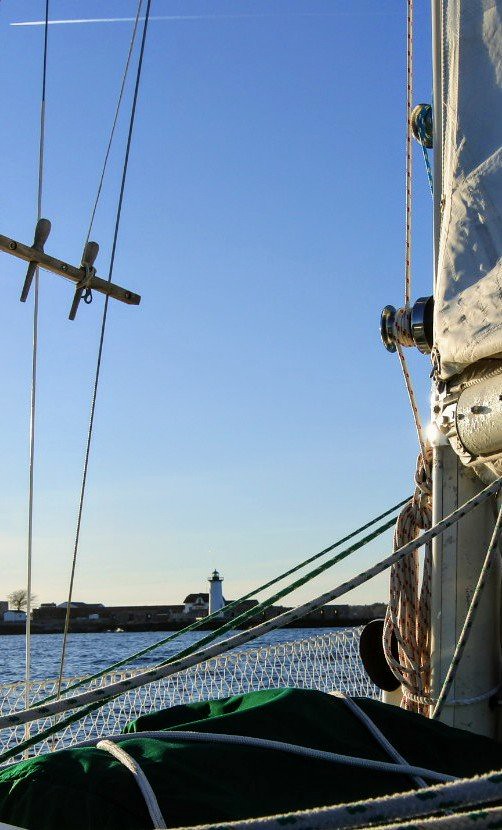 And the comedy that was docking. First spot… 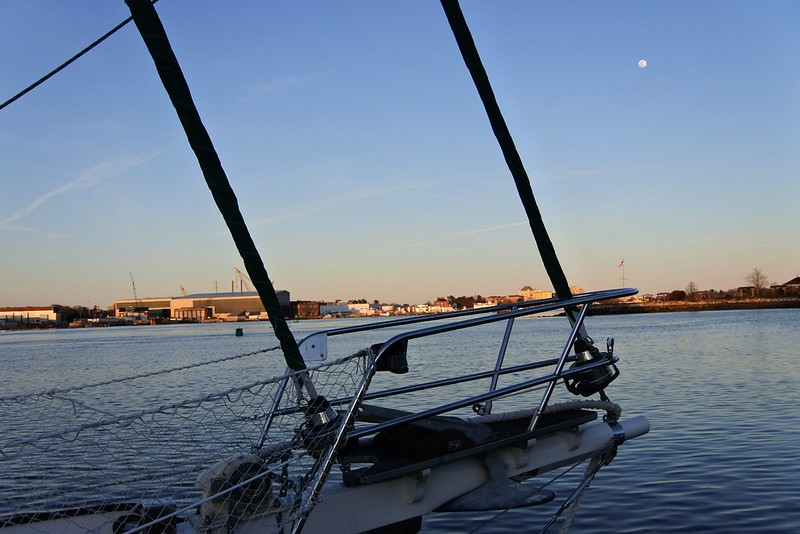 Where we discovered there was only 50 amp power. Argh! 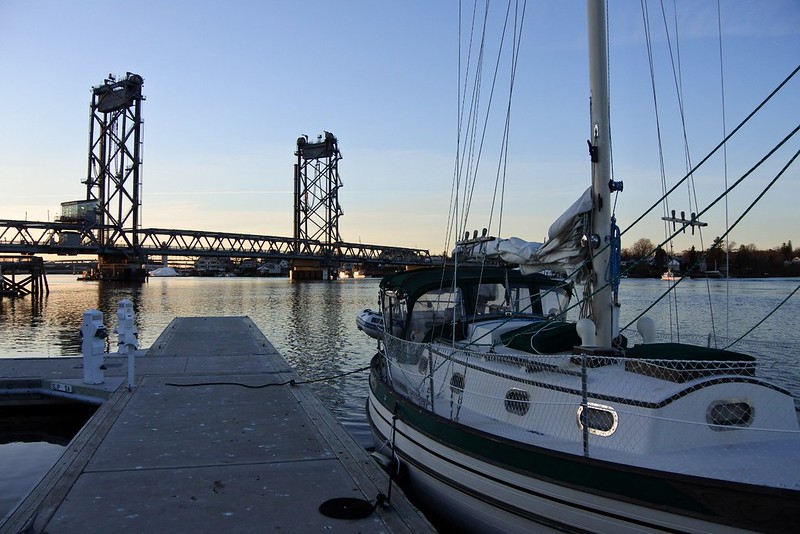 A brief debate got us back off the dock and over to the second spot where there was no power at all! And we were locked in at both docks, so we settled in for the night and made food.

Next morning a brief conversation with the parks guy in charge of the dock resulted in 30 amp power and an unlocked gate…at the other part of the dock! Moved again, smooth as can be.