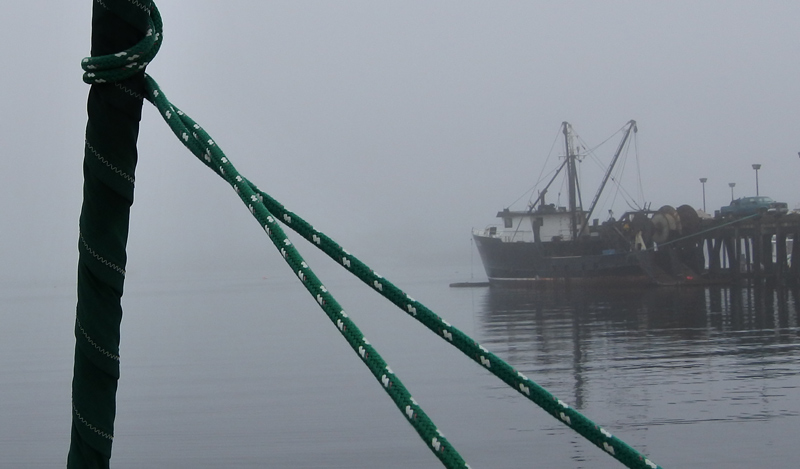 We are traveling in the spring weather windows. Gloucester, you’re nice and all. Wow – this is a town that’s absolutely built by and for the working maritime community.

We walked from East Gloucester to everything we needed. Laundry, groceries, an extraordinary breakfast that wasn’t quite for us. Liquor store, etc, etc. That town is built for people who want to do what we want to do.

This trip, though, we wanted to get dry and warm.

And we wanted to go.

After all that fog, the crisp, brilliant light excited us. This was the day to make some serious distance.

We went to turn the electronics on and the Simrad wouldn’t start. Dena said, “Do you feel good about going with phones?” I said, “And the Garmin.” She said, “Oh–does it work?” I tried it and yes, it does everything but the radar and it was a beautiful bright day.

If you trust black box tech, you’re fucked in situations like this. We had a secondary system and a tertiary pair, the cell phones with nav apps, and we never did lose signal, all the way across Massachusetts Bay.

We spent a shit-ton of money on a reliable system, but this is the second time we’ve had a chartplotter go out on us. We’re stacked up on redundancies, including the paper charts we mostly use in complicated waterways. Also, this is our territory. We’re cruising editors for the Waterway Guide and this is our designated territory. We’ve been through this place five time. We know this area. So yes. We went.

And while it was an easy day to be on the water, there wasn’t much sailing to do. We had the main up all day, the staysail most of the time, and the yankee when it would fly. The northeast wind died completely around 11am and didn’t pick up again until it came around from the east in the afternoon.

In the meantime, a land-dweller paid us a visit. This little fellow was tuckered out and provided the message that seeds and nuts would be welcome. Unfortunately, we don’t store Chipping Sparrow food on the boat. Move on, buddy. 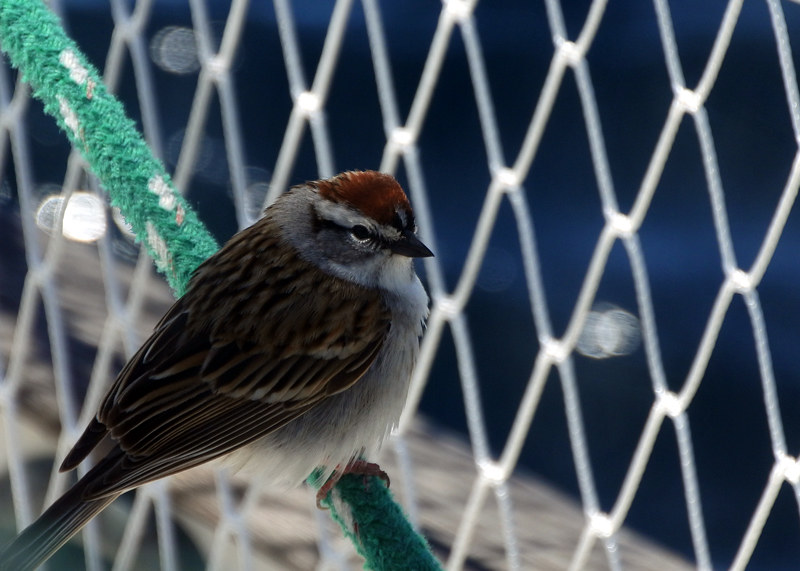 We identified him using our National Audobon Society bird identifying bible: the Field Guide to Birds, Eastern Region. He’s in full color in plate 420 and his personal deets are explained in full on page 705.

This game, where he perched within eyesight and displayed himself for us, went on for about an hour. When we ignored him, he came right into the mainsheet traveler area and peeped us through the isinglass. James’ finger wasn’t quite attractive enough without some sustenance, though.

And then we sailed. Boston moved from one side of the horizon to the other, all day long. The towers were tiny stalagmites that pointed at a gigantic sky, maybe two centimeters high as we moved across the shipping channels and into Cape Cod Bay.

The approach to Cape Cod Canal takes forever. What I (Dena) thought was Plymouth light was actually the smokestack inside the canal, and it took hours to arrive.

And then, just when we were starting to shorten sail and prepare for the sleigh ride that is a canal transit, I saw…

We’d both been keeping an eye out for whales as we passed near the Stellwagen Banks and through what is marked on charts as “Northern Right Whale Critical Habitat”. This is the single most whale active area in North America. This 842-square-mile sanctuary hosts a Pynchonian list of Cetaceans, including humpback whales, minke whales, fin whales,sperm whales, belugas, orcas, pilot whales, White-beaked dolphins, Atlantic white-sided dolphins, common dolphins, bottlenose dolphins, Risso’s dolphins, harbor porpoises, blue whales, and sei whales. But the real star of the area is one of the most critically endangered whale species on the planet Earth, the North Atlantic right whale.

We’ve been through the area on a tall ship, a classic schooner that saw so many whales jumping that people got comfortable and carried on conversations and ultimately fell asleep. We’ve been through on our last boat, when we saw one happy, perfect whale roll inside the hook of Cape Cod from only 50 feet away, an animal that was longer than our boat and made us feel small and blessed in the only way we ever do.

We saw nothing all day, and then…

What? I saw a big blow! I yelled and James, who was already in the cockpit with me, moved to where I pointed.

I (James) looked in the direction Dena was pointing, 1 o’clock off the bow. About 300 yards north of the red on the Cape Cod Canal breakwater, I saw the residual effects of that blow. An adult whale sized blow, just after it had happened.

I opened the side panel of the isinglass while grabbing my camera. I looked out and saw what appeared to be a whale that was about 5.5 feet long. It came out of the water and bent in a smile-shape, but it looked as though it was skating on a smooth, glass-like surface. Its spout was only a fifth of the size of a regular whale spout. It was about the size of a bottlenose dolphin, but it was riding on the back of a much larger animal.

I (Dena) saw a huge something heave under the water and some of it came up above and there was something on top of another something and it most certainly wasn’t a dolphin. The light was blinding behind the creatures and a sea of sparkles filled the water between us and whatever we were seeing, but it was real and it dove and then came back up to the surface, not moving much, but enough to be huge and alive.

I (James) thought immediately that it was a mother whale pushing a baby to the surface to breathe but not a single photo showed enough detail to be sure and maybe, maybe I was seeing a Spanish ship from the Arawak perspective. The camera’s screen was impossible to see and focusing was out of the question.

It was one of the most delightfully frustrating moments of my life.

We reported the sighting on the New England Aquarium site and they forwarded the pics and description to the NOAA Fisheries Right Whale Sighting Advisory System. A scientist named Leah told us the following:

You definitely saw right whales, although I am not sure if those photos are of one individual or two. From the two photos I saw, it looks like it/they were skim feeding (when they feed at the surface — they are ram filter feeders which means they swim around with their mouths open over patches of zooplankton). It’s possible you either saw one arch its back up (they are surprisingly bendy creatures), or perhaps you saw a mom with its calf. There have been three mother calf pairs sighted in Cape Cod Bay so far this season.

But Dena and I saw something that was truly beautiful and rare. Two, out of 8 billion people, saw a mother and baby of a species that only has an estimated 450 members. Last year, there were zero babies born to the Northern Atlantic right whales. This year, 7 calves have been spotted, three in the Cape Cod Bay. This is a dramatic baby boom in the right whale community and the news coverage has been ecstatic.

What you saw were a pair of North Atlantic right whales…I’m so happy that you got see these wonderful animals.  What you saw is them feeding (mostly skim feeding).  Right whales are plankton eaters so they are feeding on small planktonic animals called copepods.  Depending on where the food is, right whales will either feed at depth or at the surface.  What you saw is typical for this area for this time of year (we call it skim feeding).  Cape Cod Bay is an extremely important spring feeding habitat for right whales.  In some years more than half the population will be in Cape Cod Bay in the spring!  What you saw was only the very top of the head, the mouth was open and the whale “skims” the feed from the surface of the water…

Your sighting is very helpful.  All sightings are entered into our database and help us to better understand right whale use of habitat, trends and movements.  For example, in recent years, right whales have begun to abandon the Bay of Fundy and have been going to the Gulf of St. Lawrence in numbers larger than before known. Cape Cod Bay has always been an important spring, feeding habitat but the number of individuals using the habitat in the past 5 years has grown dramatically.  All of this is known through formal right whale surveys but also opportunistic sightings like yours.

Yesterday a survey aircraft flew Cape Cod Bay and documented over 50 right whales (including one entangled whale). However, they didn’t cover the area close to the canal so your sighting is very important. I have passed your sighting location onto a sighting network that helps to [educate mariners] of the presence of right  whales in an attempt to avoid vessel strikes (vessel strikes and entanglement in fishing gear are the two human induced causes of mortality).  You should feel good that your sighting provided a helpful notification to others.

And then we were in the canal. Dealing with dropping the main, dealing with mad current and a strange number of boaters motoring hard against it. And yet, still, even with miles and miles of road, smokestack after smokestack, all the monotony we’ve scarred this planet with…

These things that we witness, they’re so far outside that reality that it’s a wonder we can reconcile them at all. The smooth-sided canal and the wild nature in contrast…

It’s so rare to have a profoundly unique moment for most people in the world, and we have had so many of them. How many times have we realized that this shit ain’t easy. Want to face 15′ seas around Cape Ann? This is what you get for that. A moment that you know is magic, when you’re looking at it. Rare beyond rare, all the way down to the uncertainty and the desire to know, except that uncertainty and curiosity are bedrocks of the human condition, so…

So we went to a place that was familiar in the best of ways. In the weird fucking approach in the crazy current and being able to nail it because we knew when to pour on the power. The place where, in 2012, we remembered that fireworks can be glorious. Where we spent a crazy shoulder season going to Annapolis. Where we hung out with our friends Kris and Steve, and we still don’t know whether Dave ever showed up for his pizza…

This familiar place is beautiful to us.

I (James) am truly moved by my life. I know a few people who are also truly moved by their lives. Kate. People who understand beauty on levels that most people can’t or don’t. Dean. Those people are as rare as those experiences, and as dear.

To Michael and Ed, Ken and Nick and all the people who inspire us to be and do what we need to be and do. Thanks.