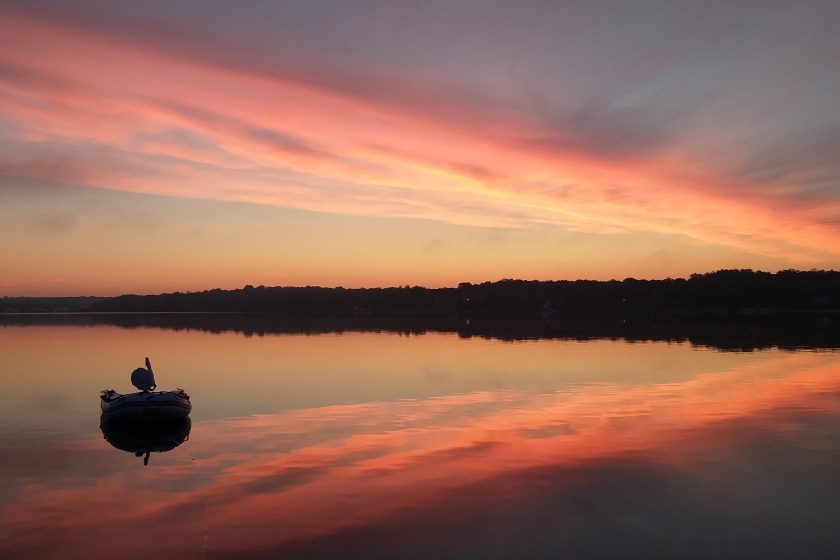 So we’re here in 3Mile Harbor, Springs, Long Island, New York anchored in 8 feet of muddy sand. We’ve settled into our lives the best we can and have come to truly appreciate our time at anchor alone.

Getting a visit from Dena’s dad, Dean, was the perfect reason to go for a sail, except we didn’t get any real wind.

We figured out what’s wrong with the world and discussed our various ways of fixing it. Recounting old stories and new (Dad’s got a new thing as a city council member and a girlfriend he’s quite taken with), we really did very little that’s easy to encapsulate. It was good to be together.

Other than that? Talking about the job, the wage slave gig, the daily grind is not only a waste of time. It’s as meaningless as all work that we do for other people.

What is not meaningless to us is chipping away at our projects list!

This weekend is the first weekend for us since we started these jobs that is truly a projects weekend. We installed a fan forward in the V-berth!

We put the new fan on the mounting platform that used to have a stupid LED light on it. I call the light stupid because there are two of them and they are aft of the bunk facing forward, meaning, they point directly into your eyes when your head is in the bunk. We need lights where we lay our heads, not at our feet!

When I pulled the old light off I realized that the base was covering a nasty hole. So I took one of the wooden drink coasters that I got Dena for her birthday last year and repurposed it as a backing plate for the new fan. It was the perfect size for covering the hole!

We also installed our newly registered E.P.I.R.B in a place that is quick and easy to get to, right above the navigation station.

…But, the really big project that we did this weekend was installing our Monitor Windvane self-steering system!

We installed our first Monitor on S/V S.N. Sapien in 2004, and that machine drove us all the way to Hawaii from San Fransisco in 2006!

The Monitor that we installed on Sapien was brand new, out of the box, and we put that thing together from the photos and instructions that came with it like it was a piece of IKEA furniture. That windvane self-steering system was the thing that convinced us that a small-boat global circumnavigation was truly doable. Having the Monitor was like having the keys to the oceans of the world!

Because it is a tradition among Monitor owners to name their windvanes, we called that first one “Monty”.

The Monitor we installed on S/V S.N. Nomad, we found in the chandlery in Wickford, RI, under a big pile of stainless steel. Her name was “Flo” and she drove us up and down the Eastern Seaboard of the U.S. for 7 of the 9 years we sailed that boat!

On S/V S.N. Cetacea we took a chance on the Monitor that was given to us by the former owner with a shrug and a quizzical look saying simply, “I have no idea what’s in that bag or how to use it.”

We found the original drawings that were made by Scanmar, the company that makes the Monitor and did a dry run on the foredeck.

Even though it seemed like we had too many parts (or not enough?), we figured out how to get it all put together.

For the hard part, we have no photos. As usual, the project required getting into a space that isn’t really meant for human occupation…the lazarette. James jumped down in and handled the nuts. (Jeez, people, really?) I jumped in the dinghy with an impact driver and a ratchet with a 1/2″ socket.

Four times, I pounded James’s brains by using the impact driver to bust the nut/bolt combos loose and, yes, by the end of four he was begging me to stop. It went like this for me: remove the old fasteners, clean up the hull and bracket, lay on a strip of butyl tape, push new bolts through, and shove the whole thing into place.

For me (James), it was like being hit on both sides of my head with small but very effective hammers, in rapid-fire succession. That’s after getting in. Both hands extended as though diving, I worked my way aft by wedging my knees under the steering quadrant and its works. Then, I had good right-handed access to the starboard side of the boat and left-handed access on the port side. Because I didn’t want to be scratched up by raw fiberglass, I wore a long-sleeved shirt that soaked up my copious sweat.

We met a couple in Bainbridge Island that referred to lazarette work as dumpster diving. The reason? There’s no comfortable way of doing that shit. It’s always going to beat you up, and aches a day later are considered mild penalties.

With the mounts reattached, it was time to get the supports in place. This had us concerned, because neither of our other Monitors had three of those things. So we worked it out.

Whoa – that was fast! Now the main body…

And really, as excited as we are about having this project done, it just wasn’t all that dramatic. We worked smooth and careful, greased all the parts, and they just went together!

And there we were, whole again.

And now we just have to move those solar panels and get rid of the davits so that Cetacea’s “Flipper” can do its job abaft.