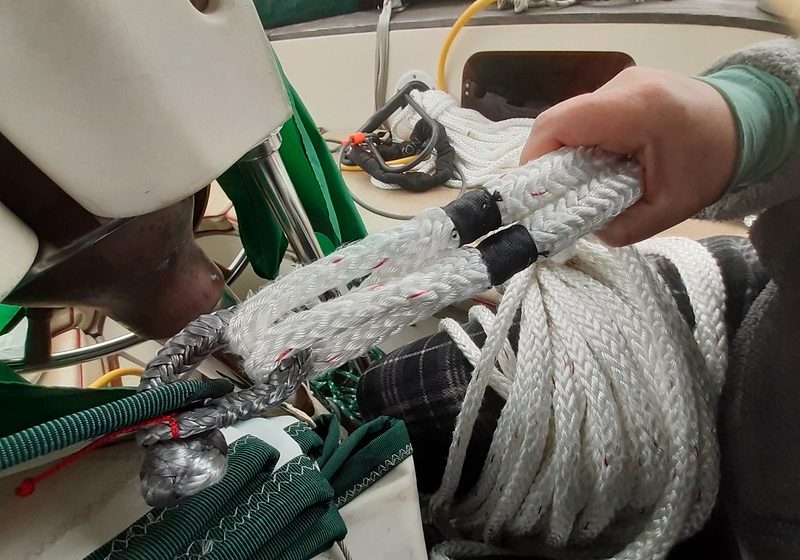 Hands are sensory organs, and the difference to the hand between old and new lines is emotional, encouraging, adventurous. A soft handful of control, thick enough to grip and pull, easy on the skin: that’s what our new lines mean to me.

The rough stiffness of the old stuff didn’t run through blocks smoothly and required that we, literally, push the boom out by hand in anything but a near-gale. My hands shrank from grasping the old salty UV-degraded polyester which sucked the moisture from my skin across improbable gaps. It had been stretched beyond its ability to retain its original flexibility because, did you know?, when you cycle-load a rope or anything, really, with a pull-tight-release, pull-tight-release, it melts a little every time and becomes, eventually, brittle.

And every little brittle point in each of the threads that make up the strands that are braided into the rope is a potential breakage, a tiny sliver protruding from the remaining structure.

But oh, the new line!

On SVSN Nomad, we invested in about 60 feet of Regatta Braid for our mainsheet, which had to run from the back of the boat to the back of the boom four times. When hauled in, there was a gorgeous coil of line hanging easily at hand. When let out for a downwind run, it eased through the hand and all four segments lengthened as the boom swung wide, until the four-part span arrested the eye.

For SVSN Cetacea, we’ve gone all out. Soft, supple Regatta Braid for the mainsheet, for the staysail and yankee port and starboard sheets. Five lines, five eye splices, five lock-stitches and whippings.

I had done the mainsheet while still in the motel room. It was a good project for that ridiculous place, but spreading my marlinspike tools around me on my own boat is a much larger pleasure.

Since Regatta Braid (and yes, I’ll stop capitalizing it every time, though it is a proper name) is constructed with twelve strands braided into a hollow ring, it’s easy to splice using the technology of the good old finger-trap. Simply figure out where to start the eye, loop it to eyeball how big it should be, taper the end, and then push the end up the middle.

I mean, I wouldn’t try this at home with only those directions, but that’s basically it. Recipe in the comments.

The lock-stitching and whippings were much the harder part, but without them I would be more nervous. The entire point of the finger-trap is that you can get out of it by relaxing which lets the tube shorten and broaden. Sheets are alternately slack and taut, especially while tacking, so I’m sure the splice would work itself loose without this belts-and-braces method.