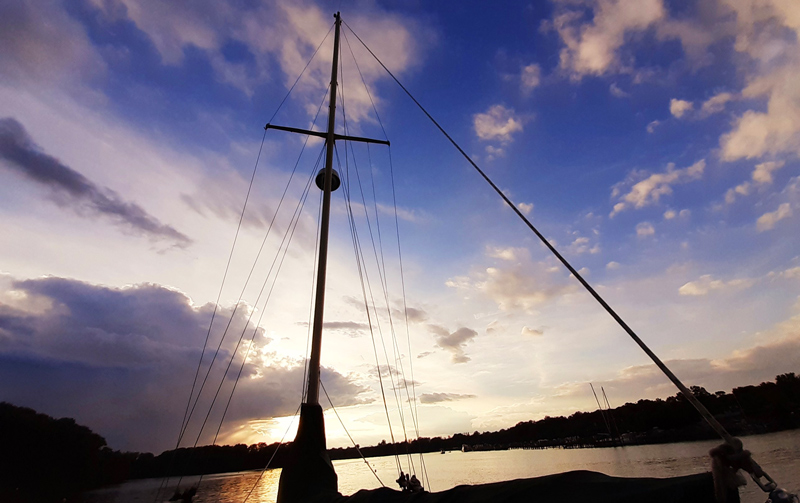 Chesapeake City rained a little, gusted a bit and all the boats in the anchorage drug-down on their anchors… all but one, of course…us!

One plastic-destroyer skipper actually motored up to me while I was quietly sipping coffee in the cockpit and asked me to “give him a little blast of the horn” if I see his boat dragging.

Even though the name of their boat was “M/Y Morning Prayer” and they were asking a complete stranger to babysit their blessed motor-yacht, I wasn’t belligerent at all. I simply smiled, nodded once and forgot he ever existed.

We quickly recovered from our forty-one-hour blow-out tour of New York, the Atlantic Ocean, the Delaware Bay, and the C&D Canal. So, once T/S Arthur had blown himself out without ruffling our feathers much, we wasted no time weighing anchor and pointing the bow up the Sassafras River.

In quick succession we sailed up/anchored/sailed down the Sassafras River over the course of two days and then went to discover Perryville and Havre de Grace (though the museums that make it a possibly-cool stop are all covid-closed). It’s a couple hours up the Susquehanna, which I (Dena) have read a lot of historical novels about. Just past the flashing red-over-green buoy “A” where we took the north fork, I checked the hours at the post office and got a shock. “Hours may be different on Memorial Day.”

How could it be Memorial Day Weekend?

My (James’s) father used to say, “There are only four days a year a ‘real sailor’ can’t be caught on the water: Memorial Day, Father’s Day, 4th of July and Labor Day. Those are the days the dumb-shits and assholes take over the American Waterways. Best stay at anchor!”

…sound advice, but a little late for that. A popular and questionable destination with wake advisories? We didn’t have to be that oblivious. We made a hard turn to starboard and sailed slowly behind Turkey Point, barely up the Northeast River. Hook down and the four boats in that little bight all left before sundown.

We sailed to Middle River and up Frog Mortar Creek on Monday, hoping that we’d arrive late enough to miss a good deal of the holiday traffic.

Well, that didn’t work out. We got to anchor where we wanted, so not all was lost, and the weekend was wrapping up…or so we believed.

This year is different. It’s the Covid19-Memorial-Week-Fuck-Off and on that Tuesday during the C19MWFO, every single asshole in a power-boat within 10 miles of us had to come by with their trump-flag-a-fly’n to give us a wave and a wake.

Then we made for Baltimore, where we are now. It was a windless engine drone of an adventure that is hard to want to write about but the only way to properly approach Charm City, I’m telling you again, is by sea.

The city of Baltimore rises to you as you approach and the intensity doesn’t stop with the boat, it just becomes part of the overall ambiance, and we are immersed in this crazy industrial atmosphere.