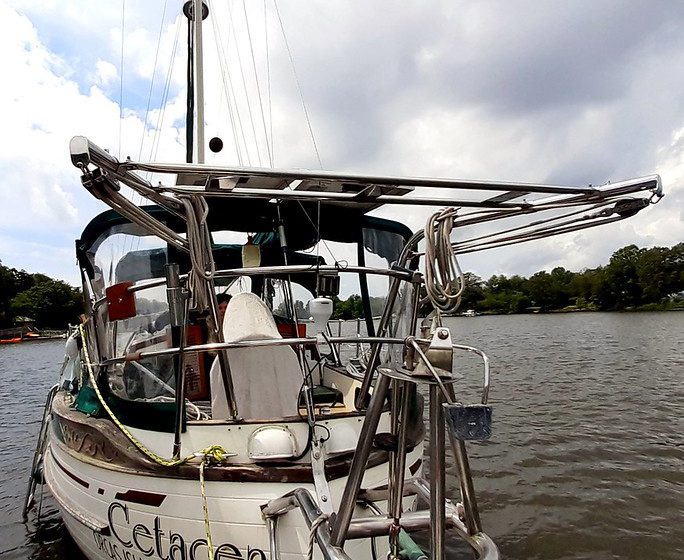 When in the course of human events it becomes necessary to destroy a system that no longer works, not just efficiently but at all, the only obvious progression is an absolute and total rebuild, from the waterline up.

Any system, whether it be political, jurisprudential, technological, educational, transportation, sociological, microbiological or whatever…when it’s broke, you gut that sucker and start anew.

When we first moved aboard S/V S.N. Cetacea we knew we would need to rebuild some of the systems in our little world. We just weren’t sure what was going to reveal itself as an ‘absolute necessity’ first or in what order fails would ultimately occur. So we made our systems-priority-replacement-lists according to our immediate needs as cruising sailors.

For example: ground tackle. The boat must stop when you want it to stop! The boat had a decent anchoring system aboard when we got her but it wasn’t what we considered an adequate system for the kinds of anchoring we do, therefore, gut that fucker and make it right!

And that is exactly what we did! We kept the totally awesome CQR. We ditched the 50 ft of shitty old chain and replaced it with 200 feet of BBB 5/16. We also ditched the stiff old three-strand for some fancy brait that takes up less room. Yes, we sleep very well at 10:1 with a 15 foot snubber, thank you!

When the time came to implement the cascade of changes necessary in order to start using the Monitor windvane (the best helmsman we have in our crew), we would accept nothing less than perfect access to the tried and true system that has never failed us. Flipper, Cetacea’s Monitor, has never had the opportunity to fail us, buried as it’s been below the combination of dinghy davits and solar panels.

First, move the solar panels. Easy enough with the clip-in connectors that combined the two panels and sent all the power to a single solar charge controller.

The ridiculous way they’d(previous owner, of course) installed the solar panels made them a pain in the ass to remove and a pleasure to have off the boat. We got that entire mess off the back of the first panel and installed it on the aft section of the bimini cover. Since it was edging close to knock-off time, we decided to simply hook the electrical back up with one panel in the new home and one still in the old.

But wait! Why, on reassembly of the connectors, does the charge controller no longer provide any signs of life?

As practiced electrical system diagnosticians, we dove into the questions and ruled everything out except…dead charge controller. Now, killing one of those things isn’t the hardest thing to do, but I (Dena) had downloaded a manual so I’d be sure to disconnect and reconnect everything in proper order.

When the thing had been bought and fetched, I tried again to get rational information from the multimeter about our solar situation and realized…the connectors had come apart inside.

Whoever fucked together the mounting system also failed to protect the connectors from corrosion with dielectric silicone. When we’d pulled the connectors apart, the cupped part had been more firmly attached to the pin than to its own wiring or fitting. Dead dead dead!

So much for simply moving a working system. And so much for maintaining the combined version of the system. We needed, yes, another charge controller. A second visit to PKYS and some judicious chopping of wires, and we were charging powerfully.

Once both panels were repositioned, rewired, and recontrolled, our solar system started working like nothing we’ve ever seen…because we traced every single electrical lead and replaced every single connection that was even a little suspect as being corroded or contaminated in any way. We gutted it and fixed every broken piece of the chain of connections all the way to the very top and because we did that, it works perfectly!

Now we live in a brand new solar system. We recycled what we could we re-use every thing we can and we always… live… happily ever after (non-metaphorically).