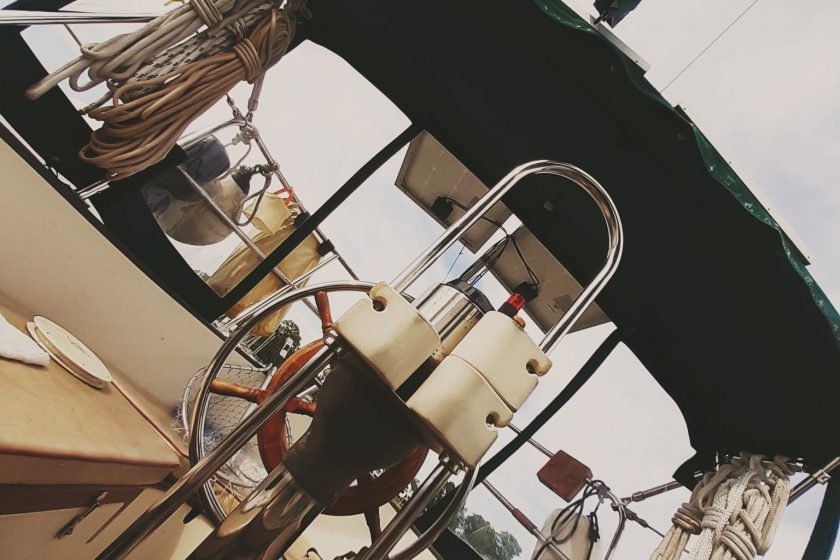 Harness Creek was kind and gentle on everything but the dinghy. When we felt the bottom of the dink, it was furry and tenacious like a lime-green shag carpet, cir. 1974!

Time to weigh-up and move on.

We sailed down the South River to Galesville to get eyes on a cool little marina Dena applied to run a while back and of course bite into some local seaside vittles.

We only stayed the night, it was awesome. Very shallow, lightly trafficked. If you don’t need anything ashore, the little bay off Hartge Yacht Harbor is cool.

The next day we decided to take the favorable winds across the Bay to the Eastern Shore, up the Miles River to the little town of St Michaels. The sailing was spectacular on all points of sail and the new solar system performed like we built it to: silent and strong.

We spent two hours more than the best estimate getting up the river because, well, we could. Why rush when you can sail? It was the kind of beating that never was much fun on Nomad, but which Cetacea takes to happily.

Upon our approach to the deep water anchorage just outside of the town mooring field, we made the shocking discovery that our #1 Jib, the “Yankee”, was stuck. It wouldn’t roll in more than a little. When I (James) went to pull the sail down, I discovered that it wasn’t just suck in the open position…it was stuck in the up position as well.

Not only an annoyance but extremely dangerous.

Just imagine sailing in the ocean and the winds suddenly kicked up like they are prone to do, then you discover the sail is stuck open and full with no way to get it down! That’s kind of like heading into a brick wall with the gas pedal stuck to the floor.

Well, in the moment, I pulled the sheets off the sail, wrestled the sail around and around the forestay, and tied it to the furling drum. That got it out of the way so we could anchor safely before tearing into the roller-furling system’s mysterious betrayal.

After a full day of active, up-river sailing, heroic temporary measures, and finally working the sail down once we could both focus on it, we came to the conclusion that rebuilding the roller-furling system would be better left as a project done fresh in the morning, after coffee.

That night Dena pulled out all the literature we have aboard on our twin roller-furling systems, matching Furlex 200-S, and scoured the installation manual for any hints on what we’d be getting ourselves into the next day.

One of the many reasons we bought S/V S.N. Cetacea was because she had many familiar systems aboard…like the Furlex 200-S, the same roller furling system we had aboard S/V S.N. Sapien that never failed, even crossing the Pacific Ocean to Hawaii.

Sapien, however, never had such a collection of half-assed previous owners.

Our yankee had a stainless steel “pigtail” almost 2 feet long (a wire that extends the halyard length to the top of the mast) that connected the top of the sail to the halyard swivel (the piece that pulls the sail up and also allows it to spin and roll in). This pigtail allowed the halyard swivel to hit the top guard every time the sail was raised, lowered, eased, tensioned, etc. The top guard eventually popped right off the top section of luff extrusion, screwing-the-pooch by a half twist.

This is where it got dangerous. The luff extrusion sections are held together by connectors that simply pop into place. A somewhat slack forestay allowed the whole thing to flex enough that the luff extrusion section at the top popped out of place…and when it became misaligned with the one below, the halyard swivel couldn’t descend.

We’d gotten the sail down by a combination of bouncing the halyard swivel up and down and flinging the sail itself this way and that. In the kerfluffle, the top section of mast extrusion somehow (magic?!) found its mate and lowered just enough to hold itself in place…as long as we didn’t make it bounce.

The bolt-cutters came out and the pigtail went away. The sail went back up smoothly and didn’t mess up either the top section or the top guard, meaning we could roll it up safely.

Meanwhile, we also took apart the bottom swivel looking for any further problems. I (Dena) was in the dinghy to catch flying fasteners and parts, but we’d anchored near the line between the red for St Michaels and the first red for a river bend…meaning we got waked vengefully by all the power boaters who didn’t want to keep their speed down for even another three minutes on the way out.

At some point in her (many owner) past, S/V S.N. Cetacea clearly lost one of the fasteners inside the barrel of the yankee’s Furlex. When we pulled the barrel apart, I saw that one of the fasteners was different than all the others. Someone had done a seat-of-the-pants repair and failed to go back with the right fastener. Not only was the bolt a hex-head rather than pan-head, it was too long and snagged the furling line inside the barrel when under a load. We pulled out our stock of fasteners, replaced it with a shorter philips pan bolt and…

Holy-Shit, we fixed that bitch!

The problem wasn’t just a stupid bolt or a too-long pig-tail or a fouled foil on a loose backstay. It was the perfect combination of all three being under load on all points of sail that ultimately caused the failure.

The other side of the entrance was less bothered by powerboat wakes, but I (Dena) got my first experience of a sea nettle sting. What a drag! Their trailing bits are long and diaphanous, which means a single sea nettle can swathe an entire arm in a split second. This place wasn’t winning me over. And then we discovered that they don’t even stock Kraken locally.

By the time we left St Michaels, we were convinced the town was suffering from the same dismally desperate failing capitalism that is killing our pandemically pounded populace.

Best put that newly fixed furling system to work and sail away.

If you know anything about us, you know we like to keep the hijinx to a minimum. When I (James) got the news that my best friend had taken his own life, we made it a short day, putting the hook down at Holaga Snood on the tip of Kent Island.