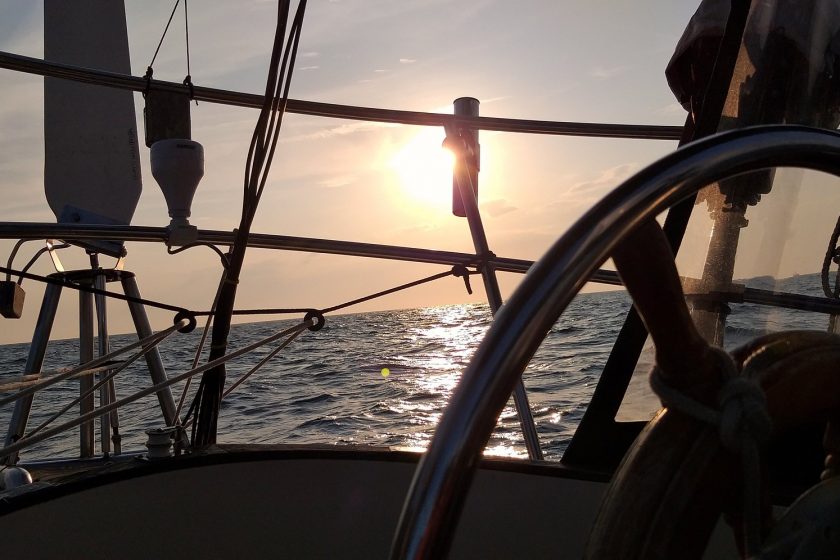 The Monitor windvane, a self-steering system that uses wind angles and water pressure to turn the wheel and keep the boat sailing properly, was installed quite a long time ago. It’s the older style with a bronze gear, so we know it’s from the 1980’s.

At some point later in this boat’s long glorious life, someone decided to replace the Monitor with dinghy davits. That decision is baffling to me (Dena), regardless of whether the sailor was gunkholing or cruising long distances. I treasure the freedom to move around the boat and fuss with the sail trim that the Monitor gives me…not to mention the time for reverie!

Regardless, the Monitor somehow tagged along through several owners as an “it also comes with”. We were the first to salivate over that detail, I guess, since it was bagged, in as many pieces as it can be broken down into, with spares and a rebuild kit.

This would have been no big thing except they put the boat’s only solar panels on the dinghy davits.

Removing them was no big thing…ha! They had bolted solid wood to the solar panel frames, split PVC pipe and forced it onto the stainless bar of the davit, and then screwed the shit out of a bunch of pipe hangars. Both plastic and galvie were represented, with no discernable pattern, and only two or three of the screw heads hadn’t been stripped.

And then we found the real problem.

I (Dena) had the fancy idea that we’d do one panel at a time so that we would be charging all day. I disconnected a panel, confirmed that there was still current reaching the charge controller, and we got to the process of installing the panel on the bimini frame.

Those snap-in connectors sound like a good idea, but water is relentless and will penetrate this kind of thing eventually. Gooping up the innards with water-repellent like dielectric silicone makes this take much, much longer, but nothing lasts forever in the rain and salt of a boat’s life.

Turns out, I’d pulled the two halves of the connector apart, but the pin that carried the current broke off inside and remained with its mate. Bonded for all eternity, which would be cute if I’d noticed before jamming the two halves back together.

Dinghy to park (this was at Quiet Waters Park in Annapolis), bike to PKYS before they close, no-touch pickup of the new controller, bike back, dinghy back, install…just in time for the sun to go down. Oh well.

With both solar panels moved (after two days of labor), it was time to photograph and remove the davits so we could sell them.

The lines had gotten a green cast to them, so we bleached and sunned them.

And then came a moment we’d been waiting for since we bought the boat…the vision of cruising preparedness that is the Monitor, freed of all overhanging obstructions and ready to take us anywhere we want to go!

Except…somewhere along the way, someone had lost the wheel adapter. This is a $600 piece of kit new and we sold a used one once for almost $500. (S/V S.N. Nomad didn’t need it because of the tiller.) Since we have yet to do the tiller conversion on Cetacea, something had to be done.

Someone posted somewhere that the official Monitor wheel adapter was 5.5″ in diameter. These two deck plates are made to close a hole that is 6″ in diameter…which is close enough. Some West System G-Flex epoxy and some clamps…4 holes and two U-bolts…some old line and a few different knot configurations and…

Our other two Monitors had these parts that drove us crazy. They’re known on the Monitor parts list by the lyrical name “Block Assembly, external, complete” and on both S/V S.N. Sapien and Nomad as “Those Fucking Things.”

They are suppose to be adjustable leads so that, from the body of the Monitor, the lines can go wherever you need them. With tiller steering, the lines cross and go to each side of the cockpit. With a wheel, they both go to one side. We cursed them because they didn’t stay perfectly adjusted and then the lines chafed. End-for-ending the lines extended their lives, but failure was still a near-certainty.

Cetacea still had the turning blocks installed (yes! seriously! after who knows how many years!), but we couldn’t use the first one without Those Fucking Things.

Rather than pay Monitor $150 to send them to us, we decided to rig a Dyneema line with two Antal rings at exactly the right place so that chafe would be minimized (if not eliminated) and we could use this wonderful piece of gear that we’d been hauling around for going-on 2 years!

And…it worked. Kinda. There was too much slop in the system and too much chafe on the lines, but a moderate wind was strong enough to make use of the Monitor windvane in the Atlantic Ocean on our 2-day trip from Cape May to Newport, Rhode Island!

Hmm. It occurs to me that I haven’t told you about yet another spit-and-bubble-gum fix we’d done in order to get that far.

The water paddle had been hit at some point. The whole thing is pretty sad looking but still shaped properly to do its job. We’d bolted it into place long before we ever could have used it, and it took a while for us to discover that there was a part missing. An Important Part. The latch that keeps it down in the water.

In the same hardware store trip that netted us the U-bolts for attaching the wheel adapter, we bought a C-clamp. Before we left Cape May, we simply clamped the two parts together and voila! A system we could use, but which could not be removed except from the dinghy or while swimming.

Because we couldn’t bring the paddle up, the thing took a beating in the Atlantic once the wind was too light for the sloppy Monitor set-up. We anchored in Newport and discovered to our distinct horror that it had come off completely! The safety line had done its job, and the paddle bobbed in the water behind us.

Okay. That didn’t work. Want to know what did?

Yes – you’re correct! That paddle is being held in place by vice grips!

Those things aren’t made for saltwater deployment so as much as we had loved the entire project of made-and-found answers to expensive problems, it was time to order the official latch. $100. Ouch.

A visit to Newport Nautical resulted in a couple of excellent used cheek blocks to replace the Antal rings. With the lines running straight from the Monitor to those blocks and then sideways to the coaming, the whole system became a tight, operational, and trustworthy option for steering the boat.

The most unexpected part of this story, for me (Dena), is that James has had an overwhelming inspiration and this Monitor, our third, is to be known from this day forward as our Lovebot!