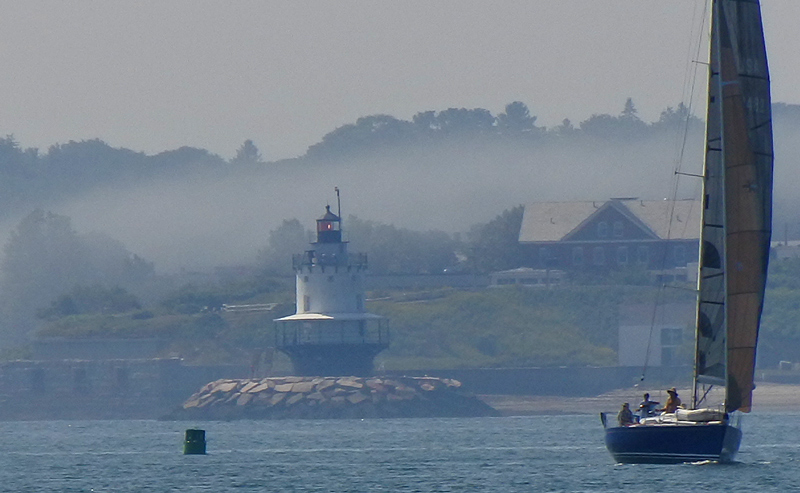 We spent just enough time in Bath to get the duties done (like buying coffee…not okay to run out) before taking off for the wilds of Maine.

It’s not that hard to go from town to being in the wilds when you’re on the water in Maine. We’d invited Michael and Ashley to share the experience, but they’d made plans with a friend who needed them that day.

Speaking of needy…osprey rely on their parents for a long time and they get pretty freaked out. Why they’d put their nests on channel buoys would be a puzzle except that I’m pretty sure they don’t understand the concepts of “channel” and “buoy”. What they do understand is a “good staging spot for fishing to feed these demanding kids”.

The chicks grow fast. Within a month, they’re about three-quarters of their adult size. They fledge a couple weeks later, but it takes about five months for them to be good enough at fishing that they can undertake a migration.

I (James) are thinking, five months, what is a drooling human five month old trying to put in its mouth about then.

This means they look like big weird birds before they’re really old enough to be held responsible for their own decisions. Sounds a little like how I (Dena) think of humans between 12 and 16.

But the wilds aren’t all about birds. There’s also the fact that some glacier scraped this land with rough indifference, creating the ledges and depths that remain to this day.

In the passage from Bath to Robinhood Cove via the Sassanoa River, there’s so much going on. It’s like deciding to walk from the bus stop in Midtown Manhattan to the rumored falafel place in the Lower East Side because you’re meeting a schooner but not until…

The wreck at the entrance to Robinhood Cove gave us a cheery skeletal hello and we anchored deep, deep within.

Of all the places, on all the waters and lands of our lives (separate and together), this is one of those that is a home. Hi, home.

James had cast his line into the employment waters and he got a response in this wilderness. We don’t have signal there except with roaming and he’d used almost all his sending friends pics via Whatsapp, but then the email came and the response went and…

We went down the Sheepscot rather than over to Boothbay and Linekin which, to be honest, was less exciting in Covid-days anyway.

And into the realm of Dolphin Marina but not quite there. We anchored in Ash Bay for the first time. A win for being free and a loss for the connectivity that could have had us meeting friends for dinner.

And from there to the Plan. The place we’d be able to shower and prep and primp and access all the tools that would get us to Boston. For a job interview. James was to be considered for Facilities Manager at Charlestown Marina in Boston Harbor.